Before the bell rings, both fighters rise from their stools.

Mechelle thinks: I have to pour it on this round. I can get the finish here. I’ve done it to her before.

Emma thinks: I’m hurting, but I’m better. I need to prove it.

The first part of the round plays out like you might expect. Mechelle comes out throwing leather and Emma just trying to avoid or mitigate the impact of those orange gloves.

Mechelle’s success is a bit hit or miss, but she does manage to get a clever right hand over the top of Emma’s guard that twists Emma’s head around.

Laila: “Gauthier is pouring it on, but she isn’t able to find that next big punch that would significantly hurt Emma McGale. She’s winning the round, but she’s not any closer to knocking out McGale than she was at the beginning of the round.”

As the round progresses, Emma feels more and more confident that she has recovered from last round’s knockdown, and Mechelle begins to flag a bit, having thrown a flurry of punches in the last few minutes.

True to her tenacious nature, Mechelle doesn’t give up, though she does get a bit wilder, and those wild punches are easier for Emma to avoid. Emma avoids one such right hand by swaying to her left with her guard up. It’s not time to strike back, but the confidence of making your opponent miss is still something.

Laila: “Gauthier has thrown everything at her opponent, including the kitchen sink, but she hasn’t had the success she needs to really get this fight going back in her direction.”

As Emma’s confidence returns, she begins firing back. Both fighters stand and trade punches in the center of the ring. It’s what the crowd wants, and they applaud the bravery of the fighters doing so, late in a title fight, both putting everything on the line.

At the end of one exchange, Emma ends her combination with a left hook, while Mechelle tries to throw a right hook to the head. Both land, though Emma’s lands on a sensitive area of the human anatomy, the liver, with much more vim and vigor, and with much more authority.

Laila: “A hellish body shot from Emma McGale catches Mechelle in a sensitive area. Has she hit paydirt?”

It takes a moment, but she has. Mechelle reels away, her body screaming in agony, as she simply cannot hold back the pain.

Laila: “Gauthier is hurt! Unbelievable. After a shot to the liver by McGale, Gauthier is in deep trouble as the tables have turned completely. Can McGale get the finish that Mechelle was not able to get in the last round?”

Looking for the finish

Emma thinks: I’ve got you now. You aren’t going anywhere.

Emma connects with a massive right hand, pushing Mechelle’s head, neck and chest backwards with the force of the blow. No doubt the champion would have toppled over if the ropes were not keeping her upright.

Laila: “The champion is badly hurt! McGale uses her physicality in the ropes better than just about any female fighter I’ve seen in this division or otherwise. Gauthier looks like she wants to continue, but her body is just been broken by this punishment.” 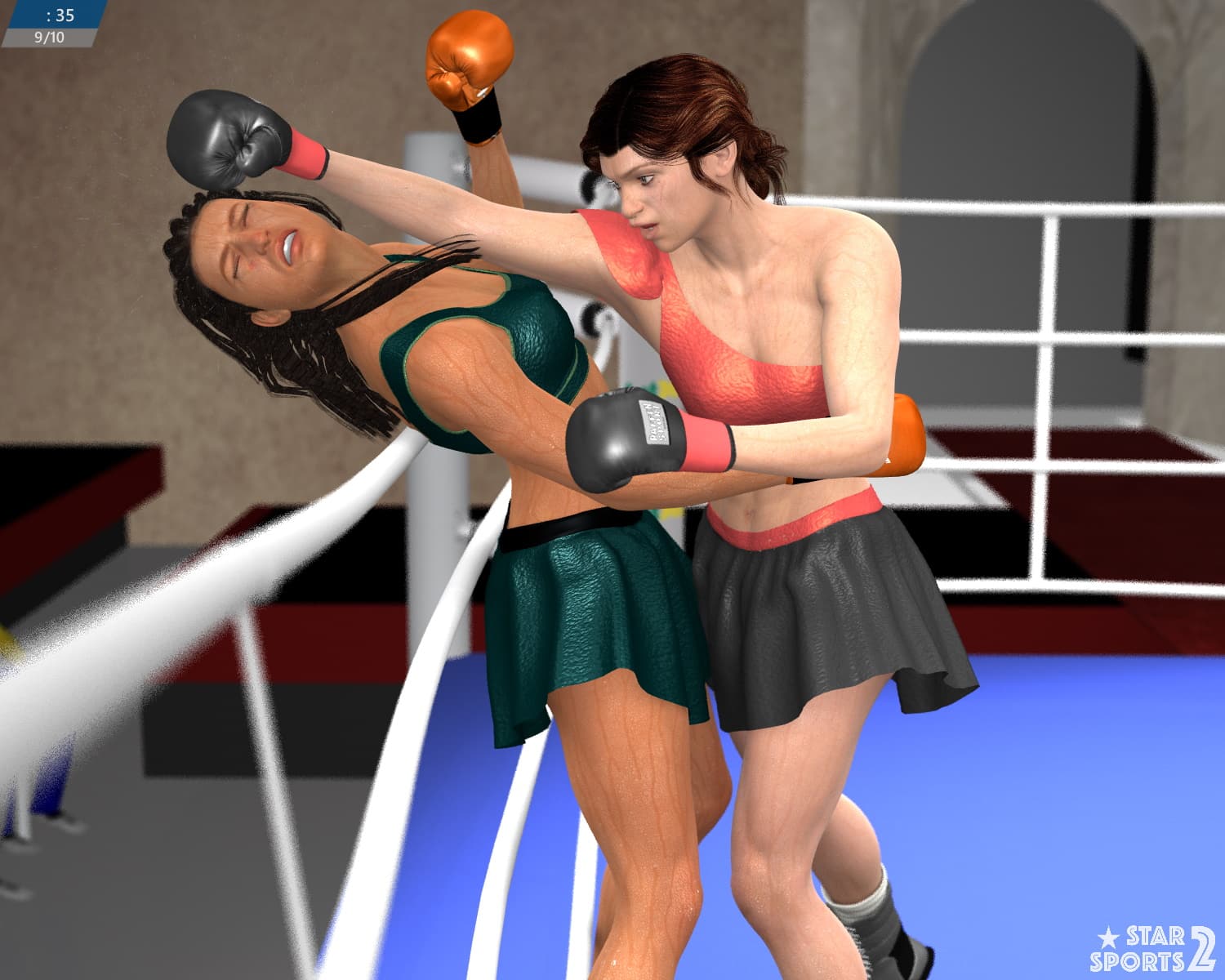 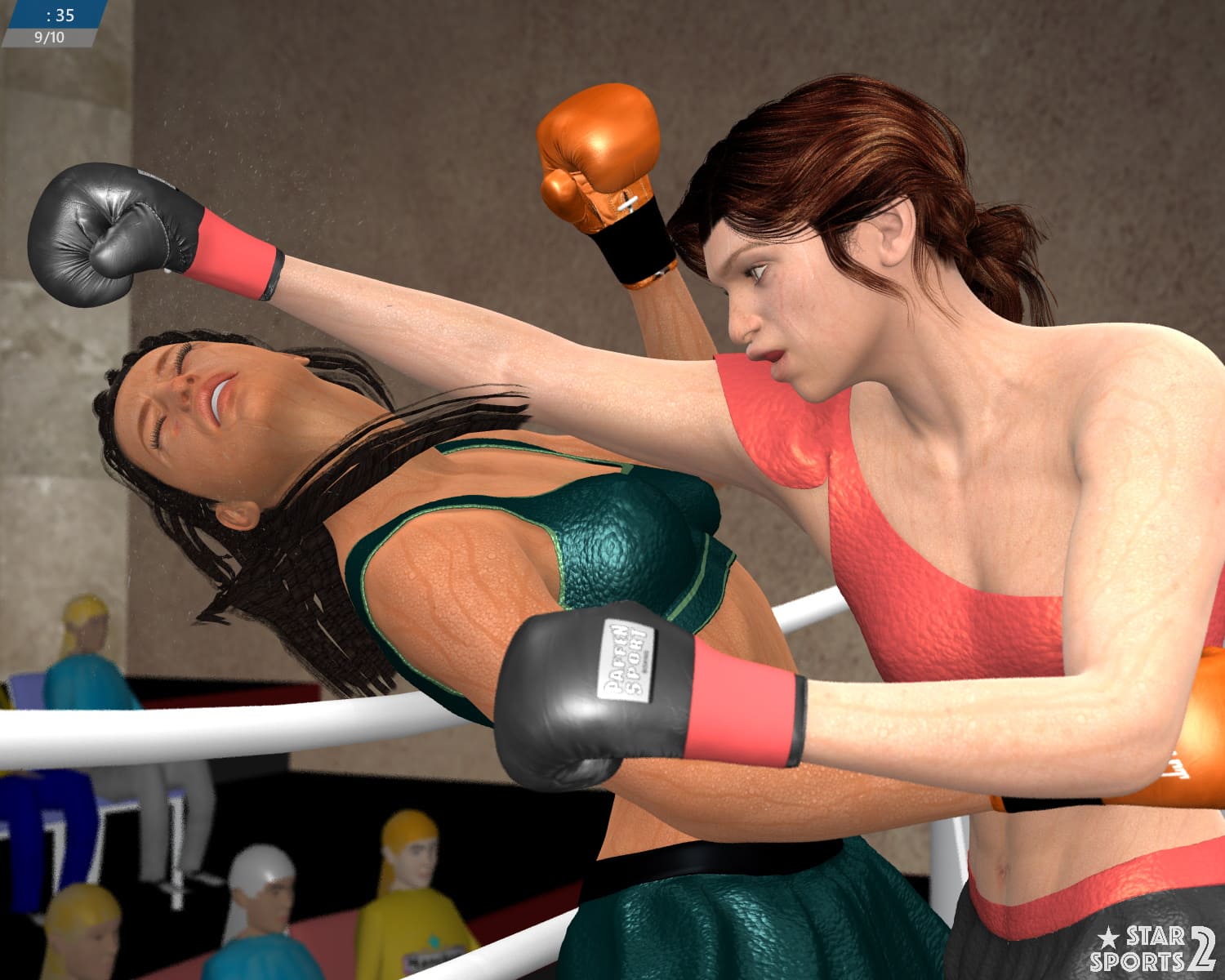 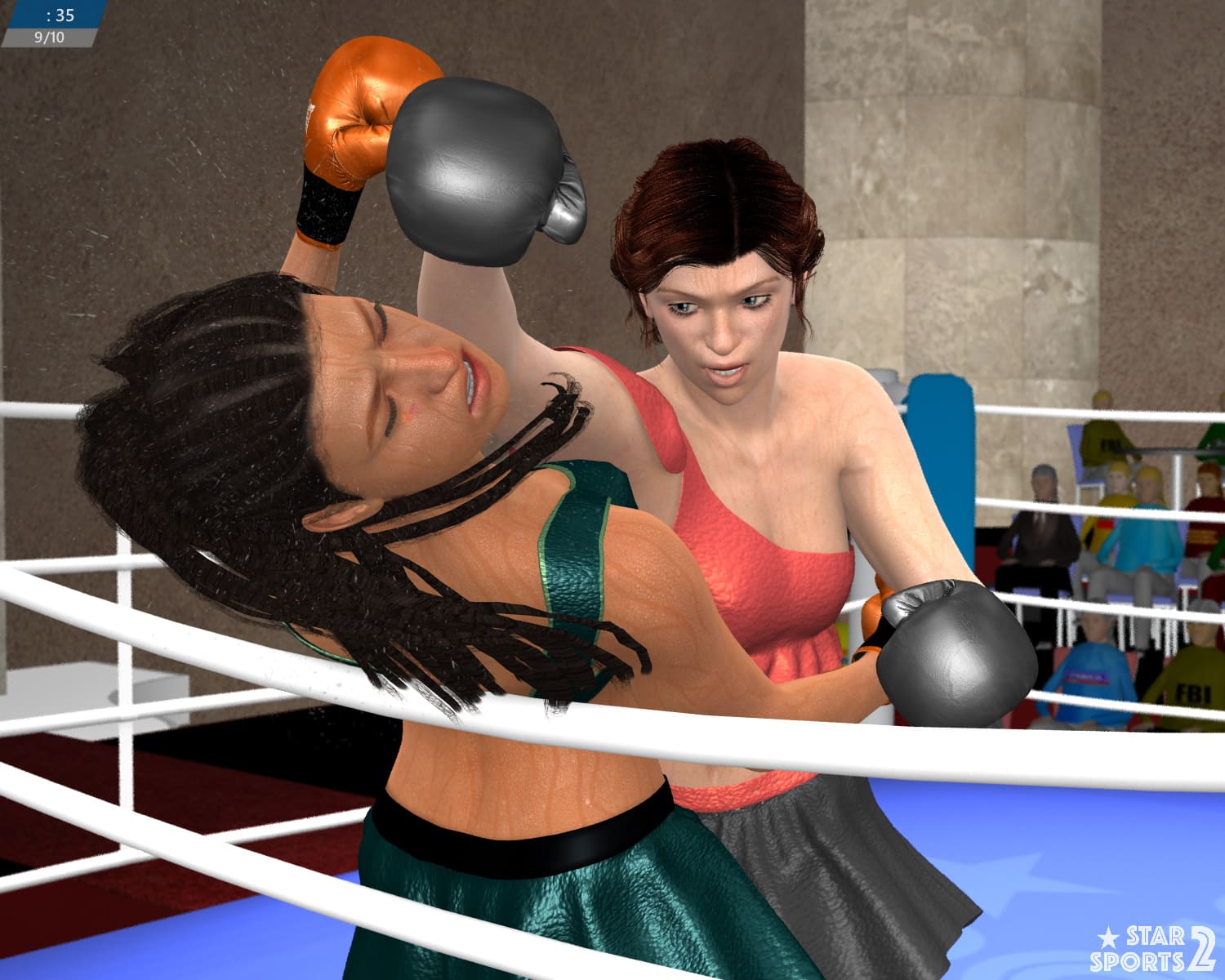 Mechelle’s head swims after taking that right hand. The only thing she can do is hold on to the ropes to keep herself upright. She’s not fighting back any longer. That resistance has been broken. But the fight is not over. Not yet. And Emma McGale will not show mercy. Nor should she be expected to show it. This is boxing, a savage and brutal sport. Both have signed up for it, and Mechelle would no doubt do the same to Emma if given the same chance. Fair is fair.

Emma resets and fires a left hand. There’s no opposition so it lands perfectly flush on the jaw and chin. Mechelle’s head is buffeted back again as she takes the full force of the blow.

Vainly, Mechelle’s coach Sylvie grabs her towel to throw into the ring, but she knows that it’s far too late to prevent what is coming.

Laila: “This fight needs to be stopped! Gauthier is helpless in the ropes and McGale will not let off!” 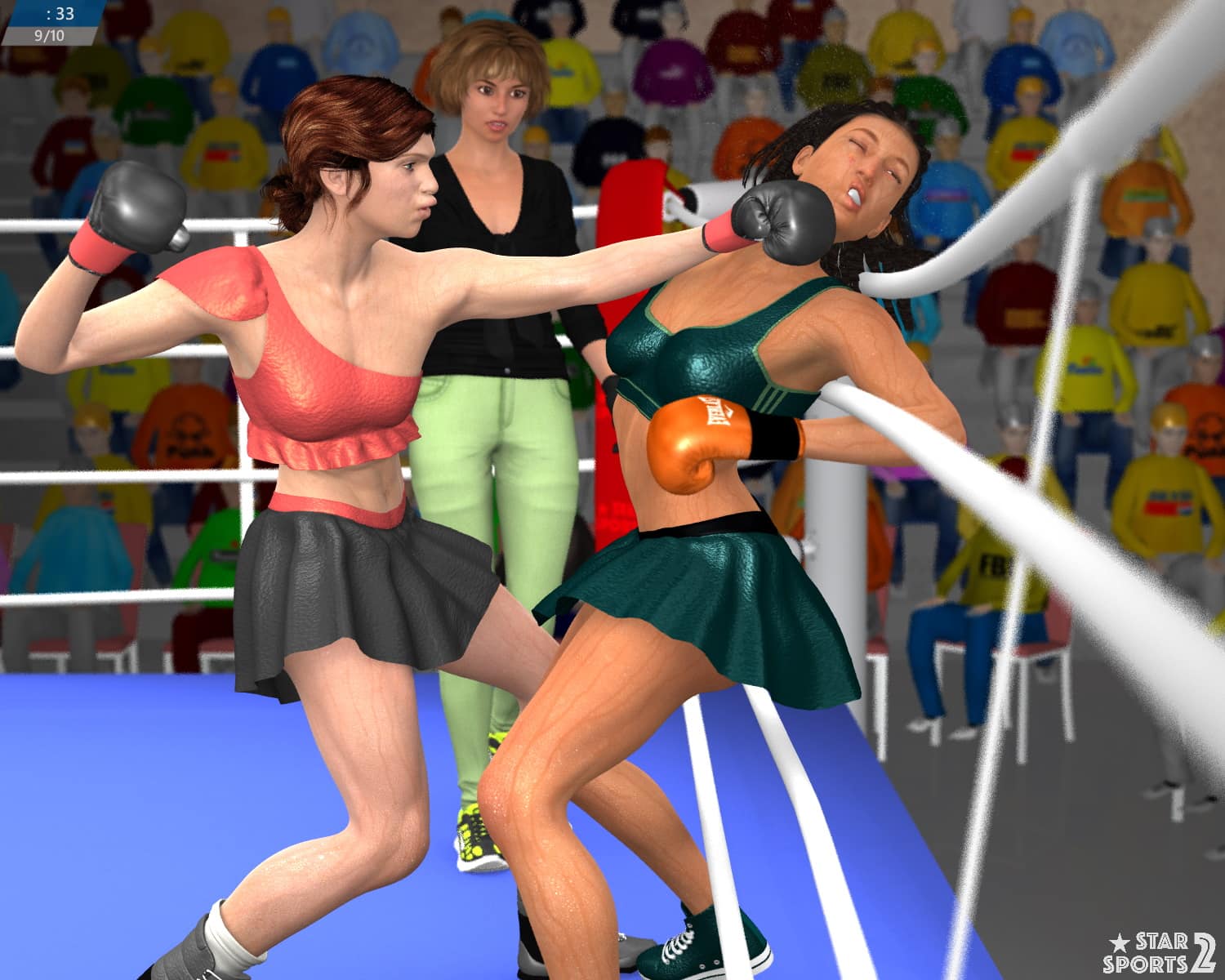 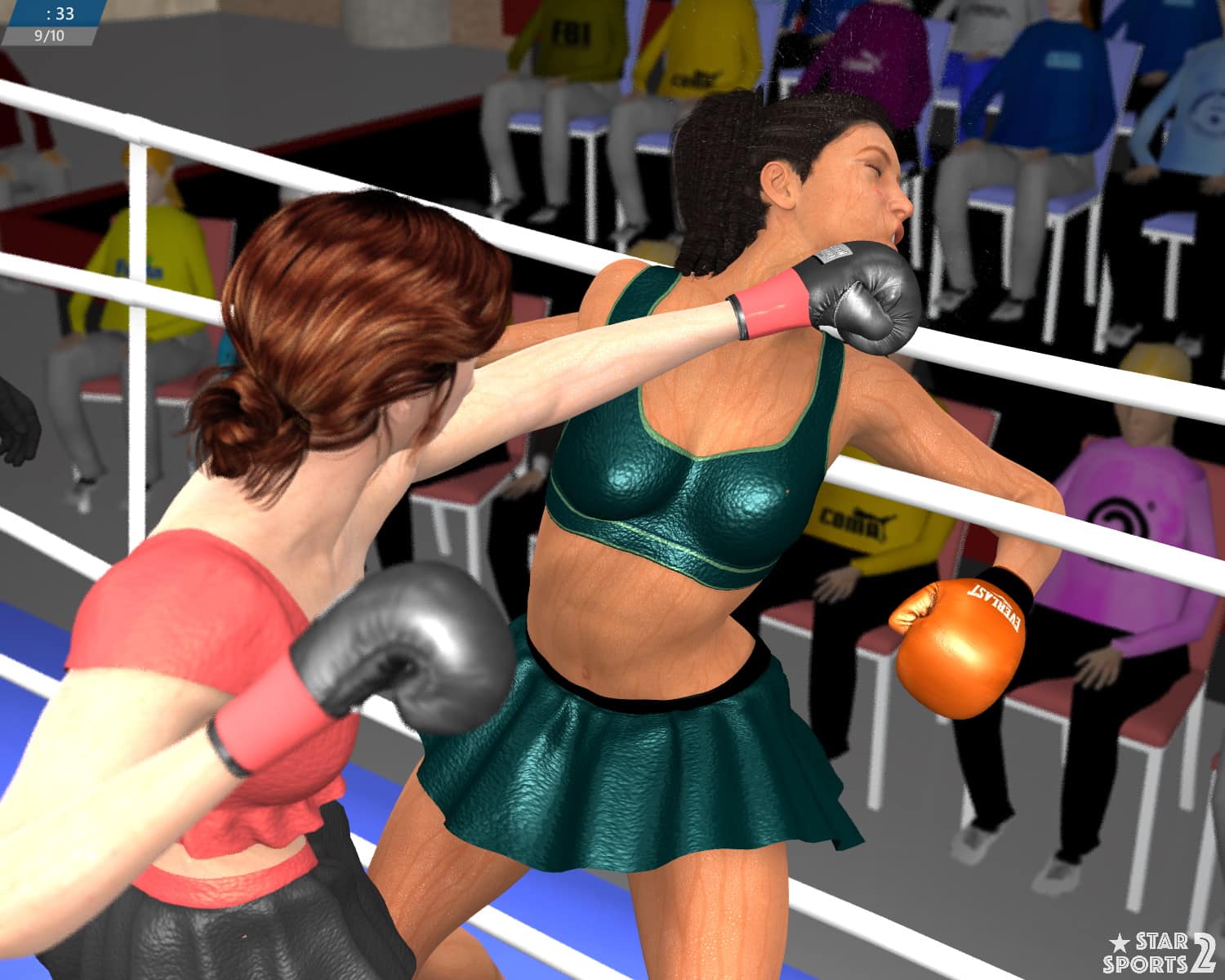 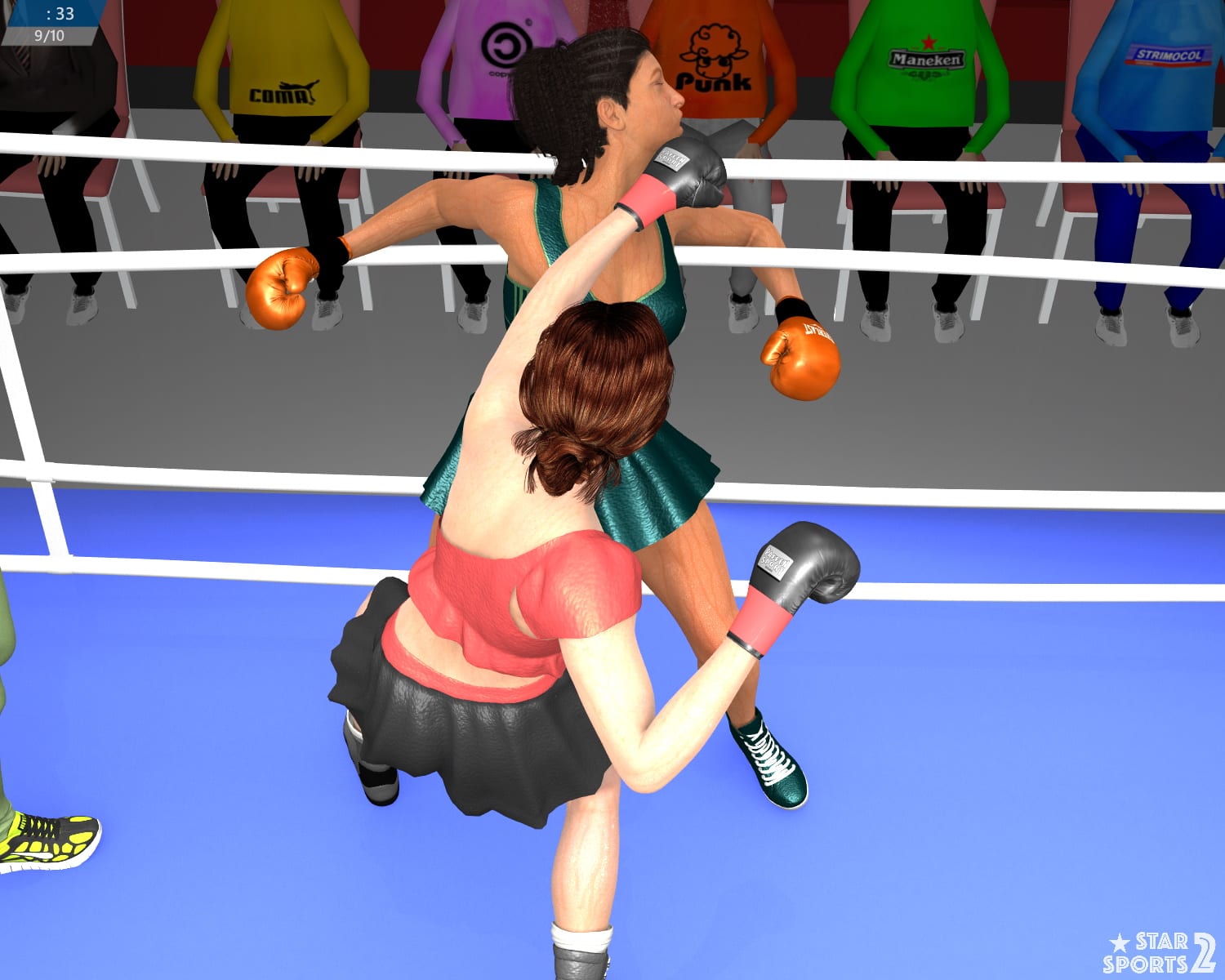 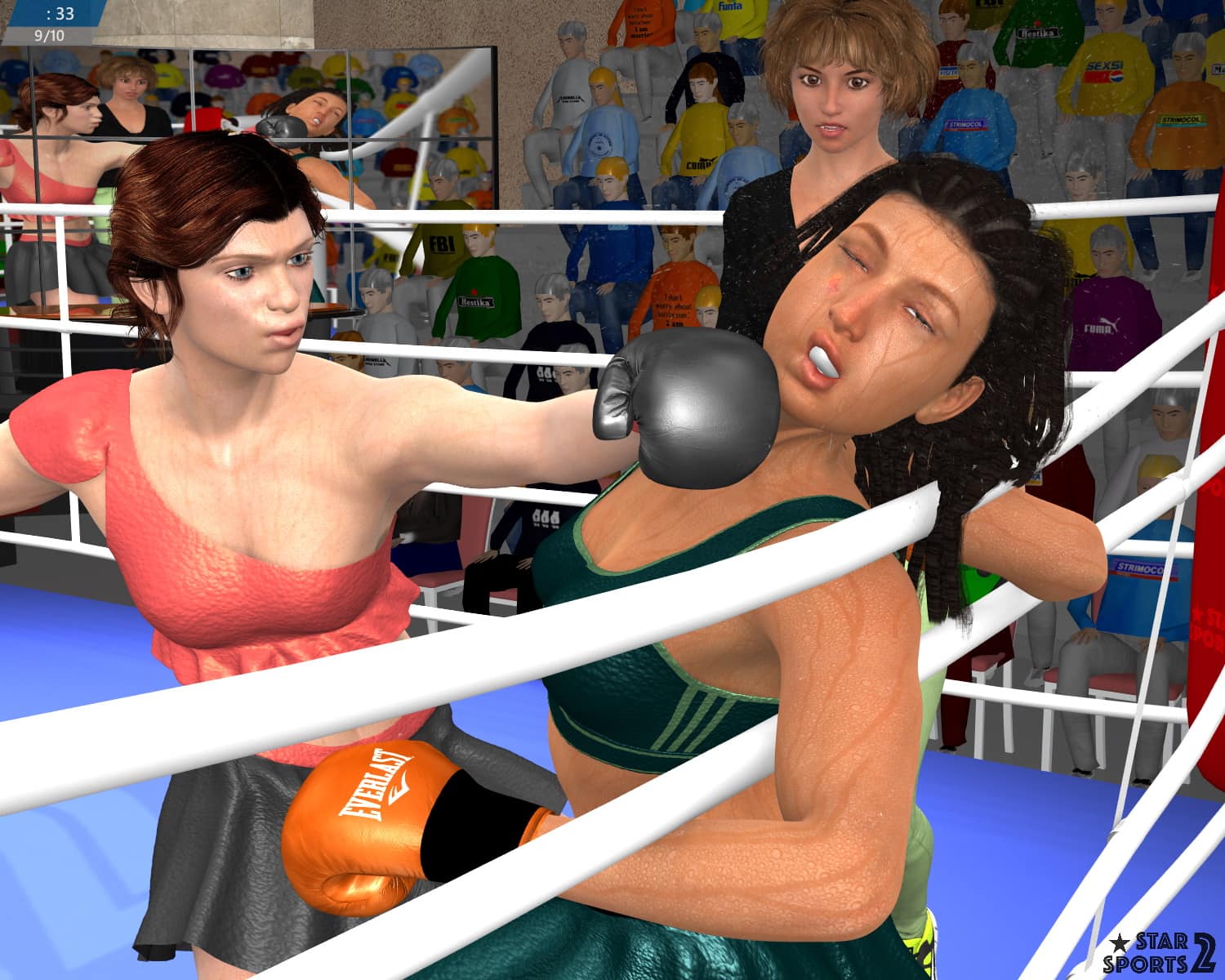 Victoria James might not be one of the elite referees in the world, but she is no dummy either. She knows the only way to stop the fight is not with words, but to physically intervene. So she yells at Emma to stop, but more importantly, she leaps towards Emma and pushes on her shoulder, completely disrupting the right hand follow-up that Emma was planning on throwing.

Laila: “The fight is over! Victoria James saves Mechelle Gauthier from further punishment as the champion is completely out on her feet. A good intervention by a referee, who made sure that she protected a helpless fighter.” 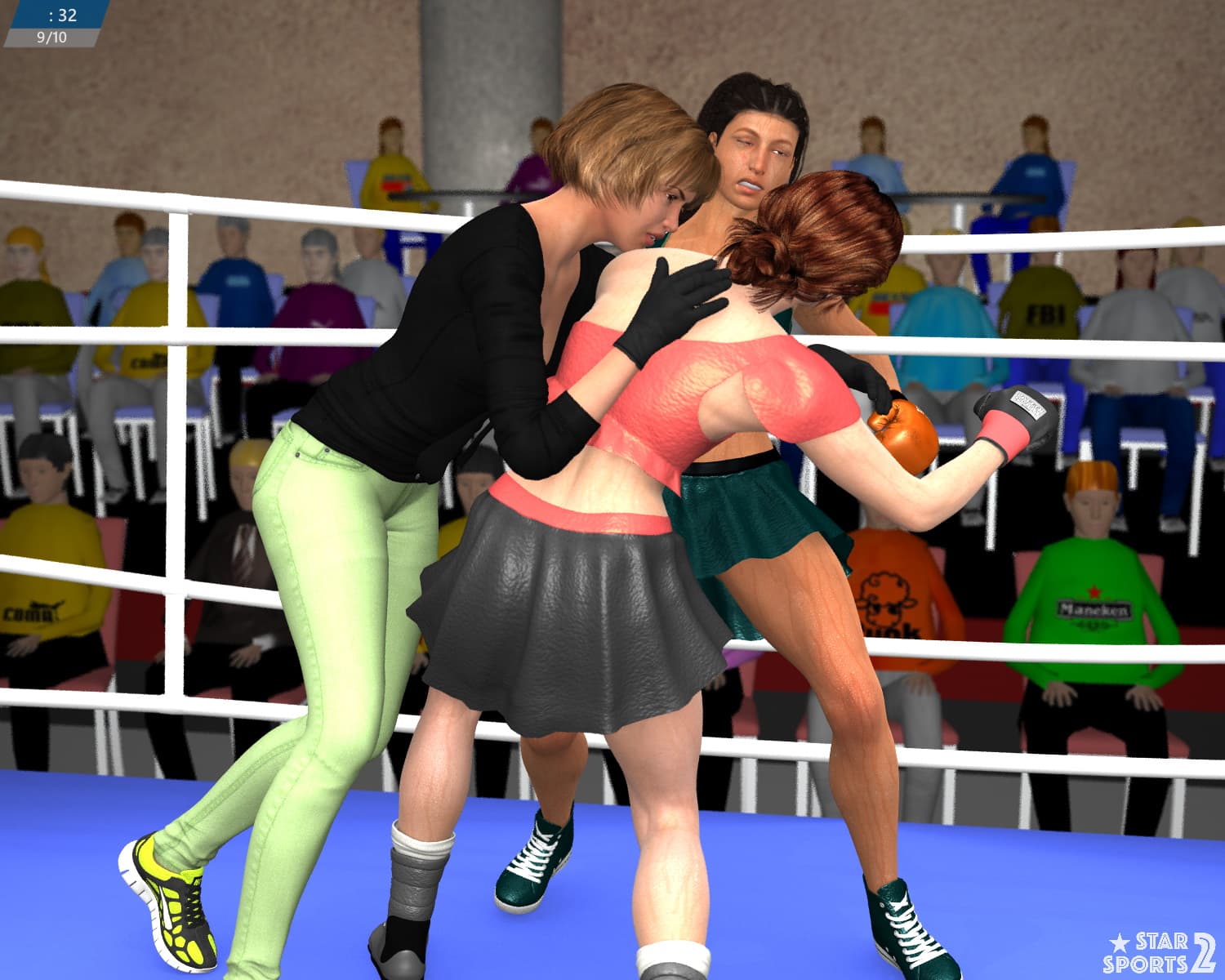 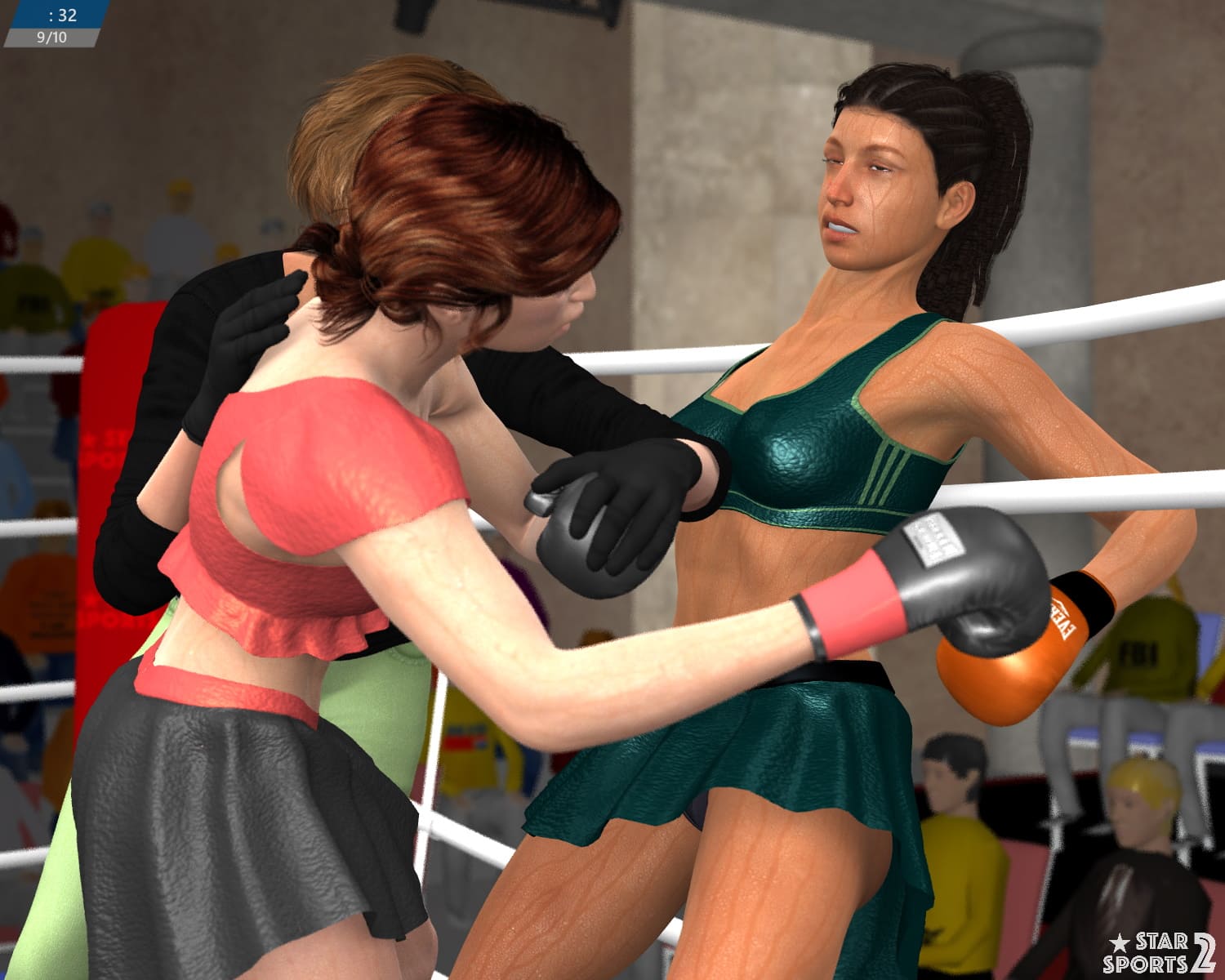 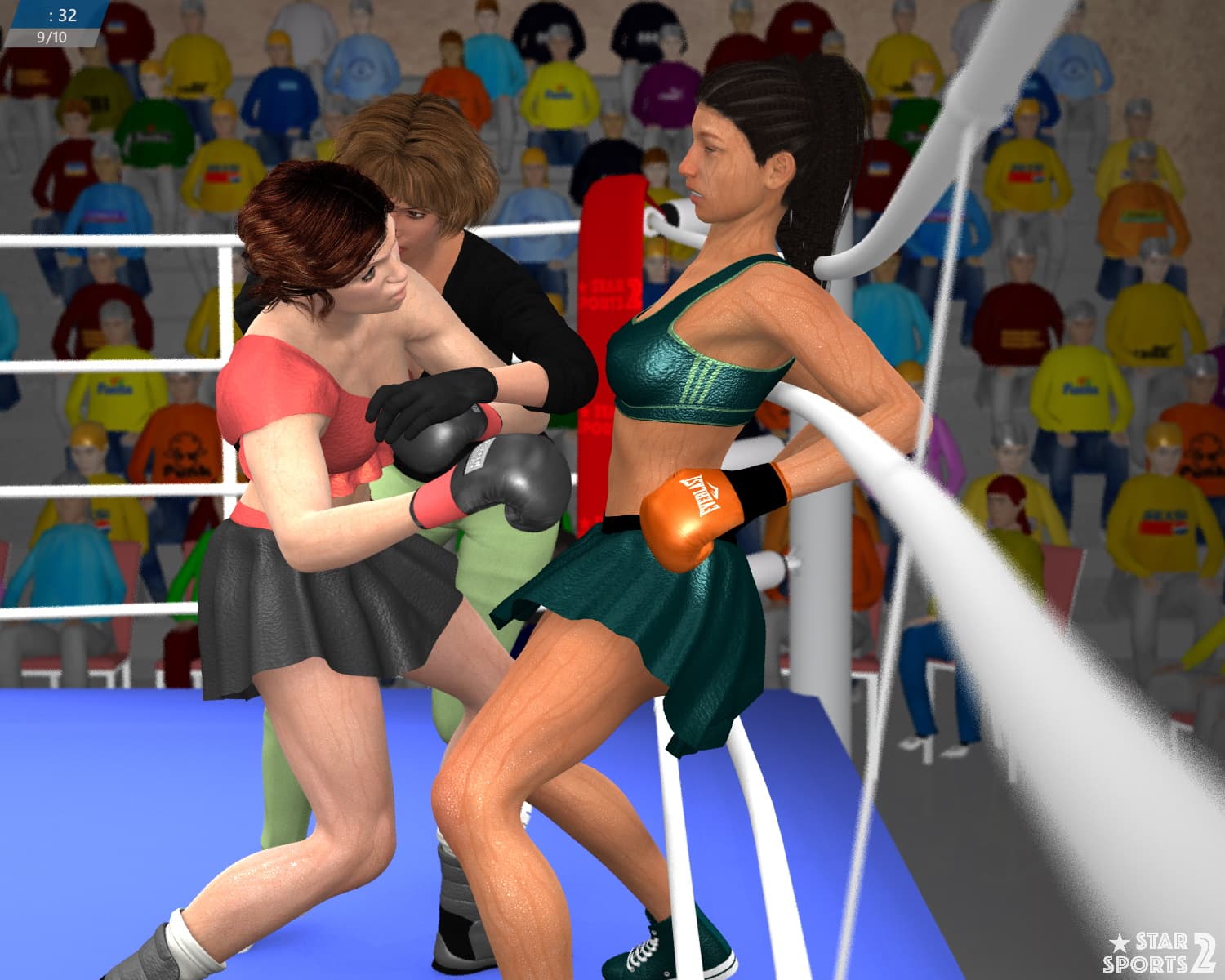 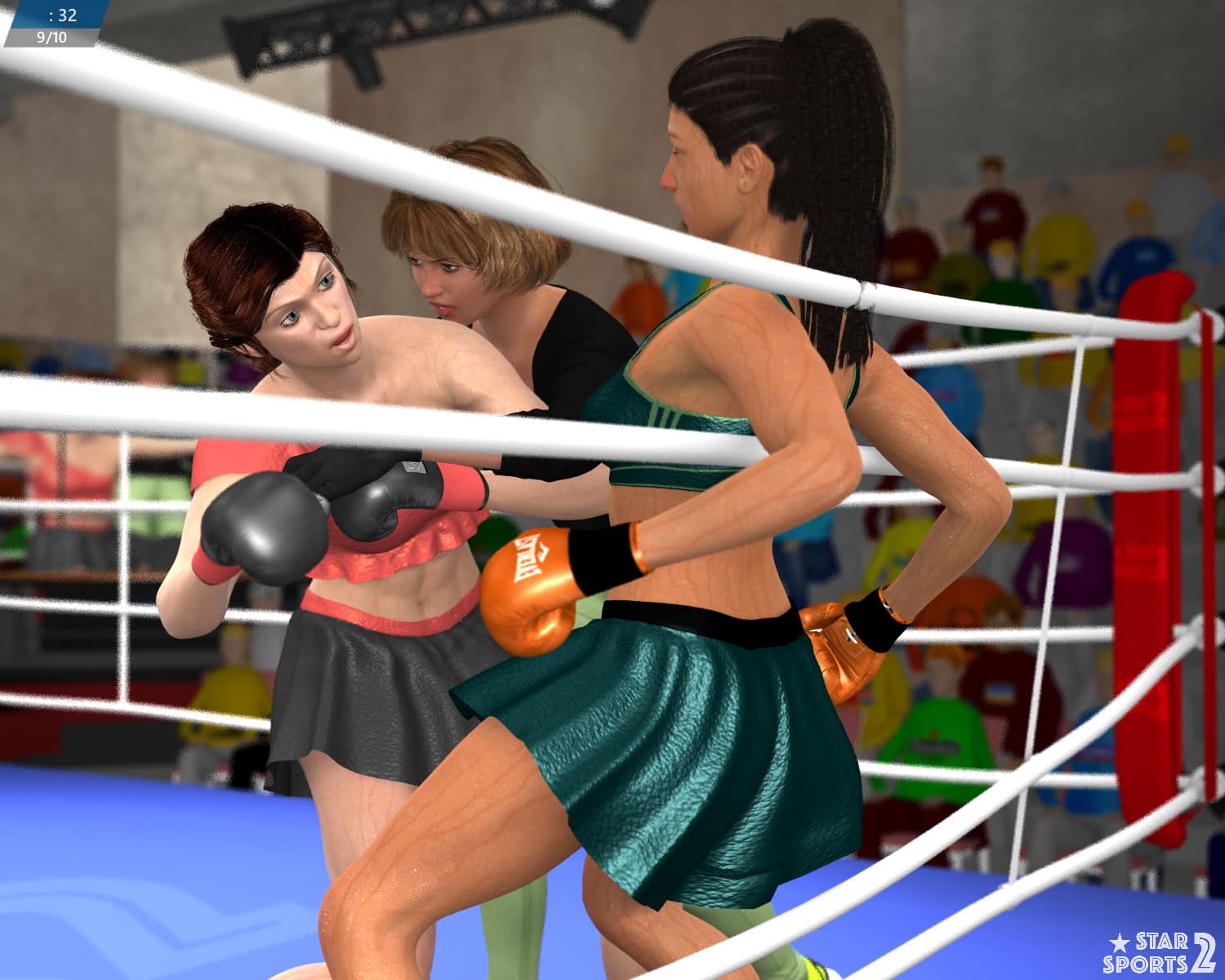 Having pushed Emma away, Victoria grabs on to Mechelle, using her arm to keep the punch drunk fighter upright. She waves her free arm in the air to make it official. The fight is over. Emma McGale has won. The Peach is now champion of Canada.

It takes a moment for that fact to register.

The new champion of Canada lets out a yell of joy. Long years have been spent in the gym, in the ring to get to this moment. And it has happened. The record books will show Emma McGale as a champion.

Laila: “A few minutes ago, McGale looked like she was finished, but now she has emphatically finished off the former champion, leaving her completely out on her feet in a brutal way that has this crowd energized. What a way to start off our broadcast!” 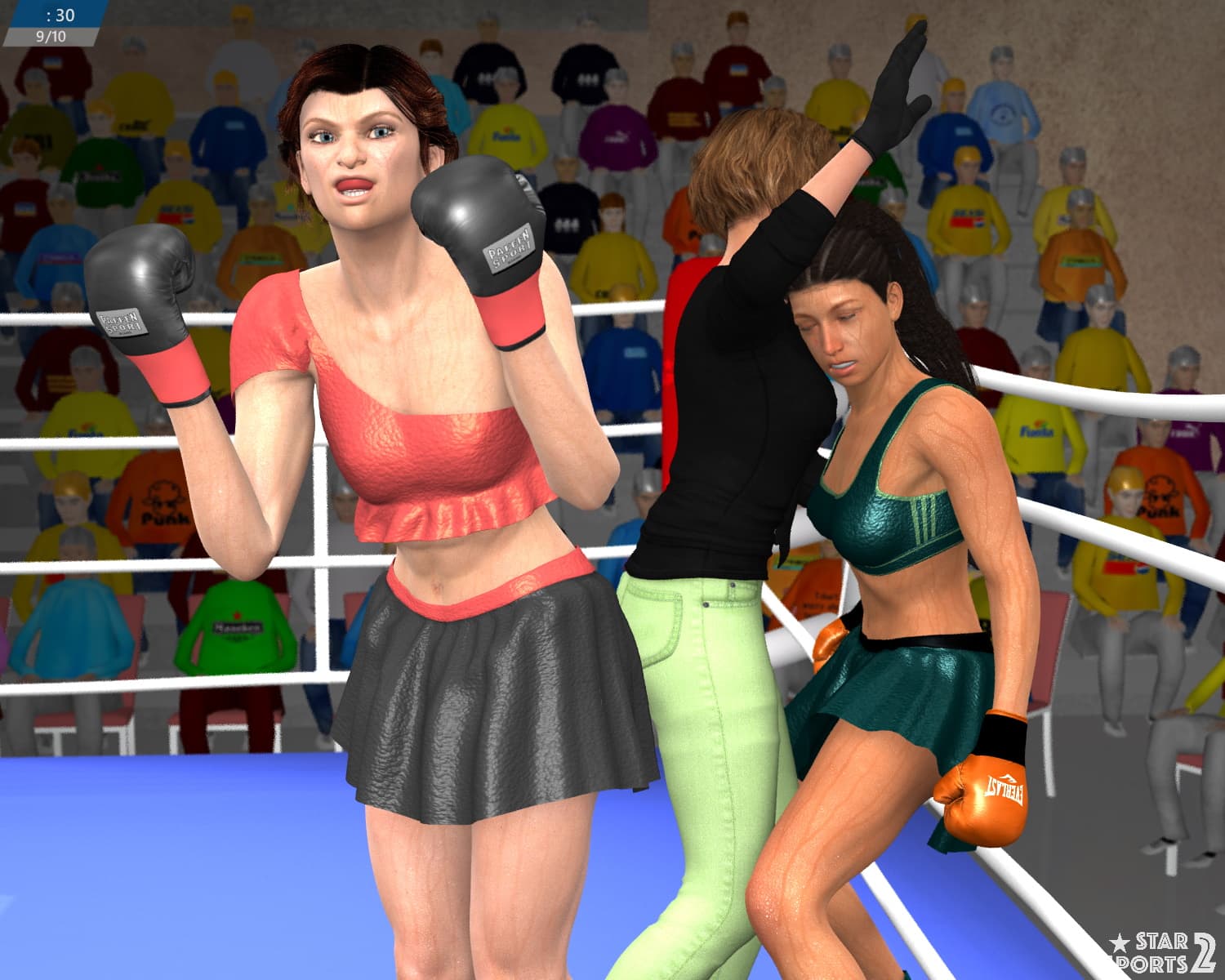 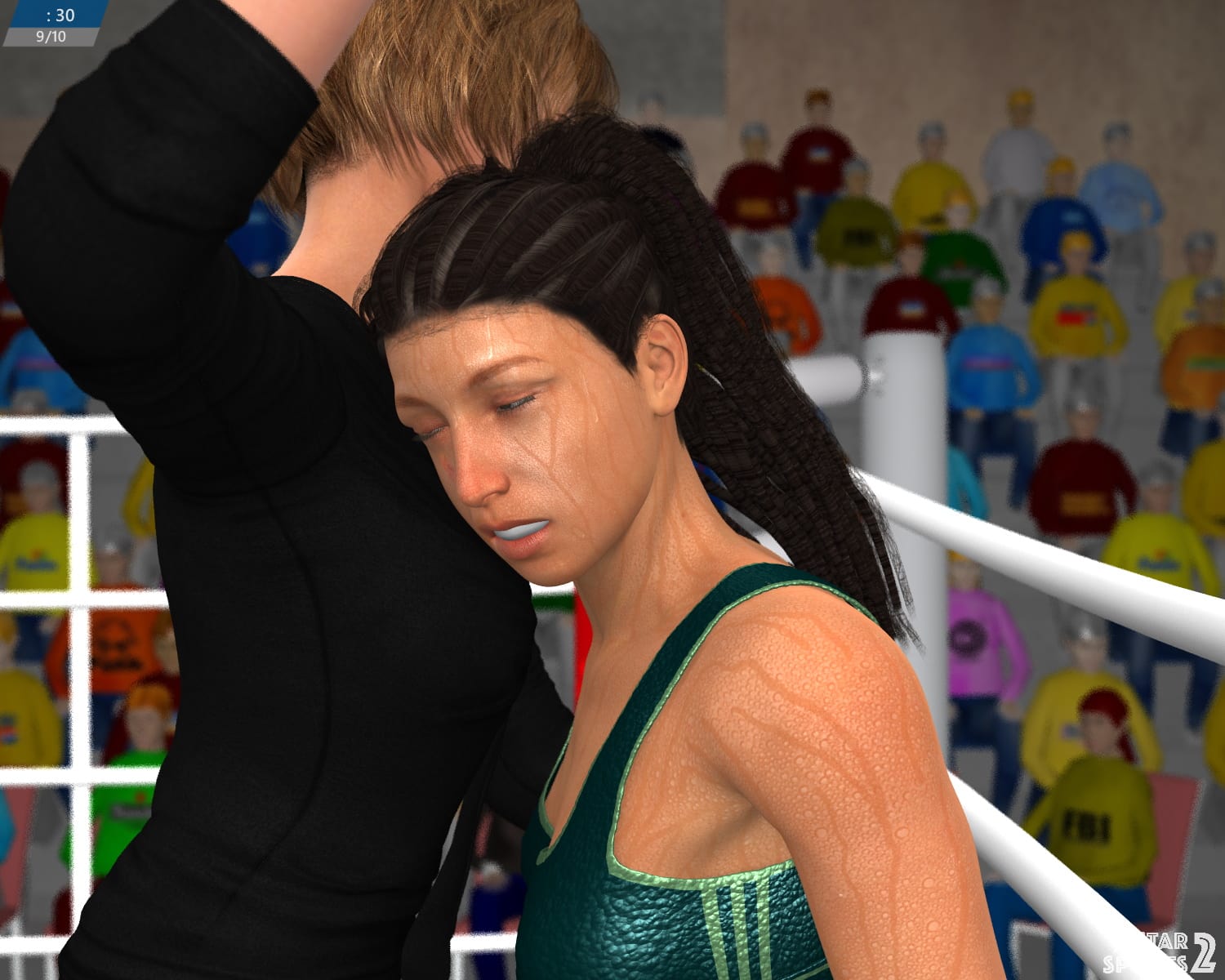 Emma climbs the turnbuckle in the neutral corner and flexes, showing off the weapons that have brought her to this moment. It’s quite an image. An image that she will probably get framed and put on her wall at home.

Sandra Blohm and Virani race to the neutral corner to be close to her. But this is Emma’s moment. She barely registers them as existing. This is affirmation for her. 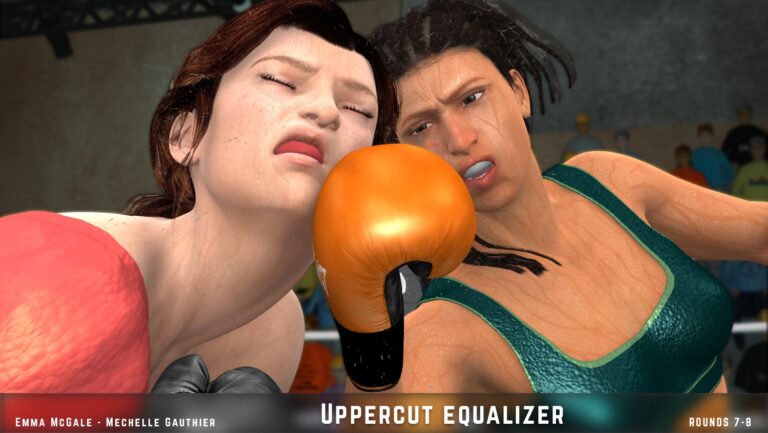 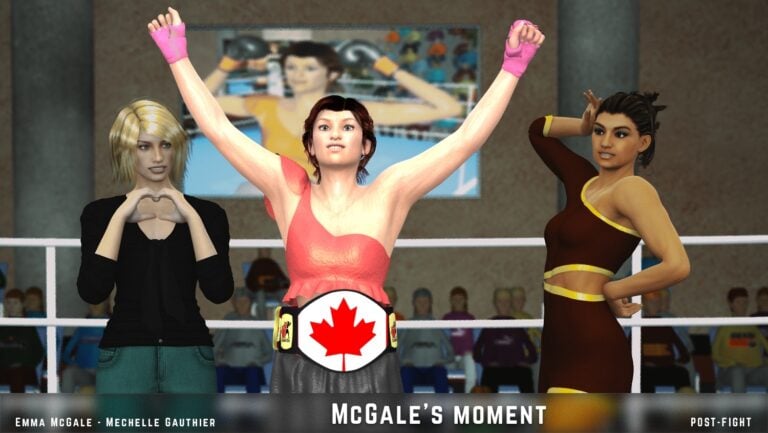