Emma is confirmed as champion and she discusses with Mechelle

As Emma continues to celebrate, Mechelle is put on a stool and attended to by the ring doctor, referee and her cornerwoman, Sylvie. Though the former champion took a bit of a beating from Emma, it doesn’t take long for the ring doctor to give the all-clear.

Sylvie: “Thank you, referee. Good stoppage. We appreciate that you put yourself at risk.”

Victoria: “I could have maybe stopped it one punch earlier.”

Sylvie: “Don’t hold yourself to an impossible standard. The finish came quickly.”

Victoria: “Well, thanks. Glad you are okay, Mechelle.”

The former champion’s head is still pounding a bit, as she talks with her coach. She’s still not completely ready to get to her feet.

Mechelle: “I went out, didn’t I? My recollection is a bit hazy.”

Mechelle: “Damn. That girl can hit. And she’s so strong.”

Sylvie: “She’s a worthy champion. But so were you. Don’t forget.”

Mechelle: “I won’t. But I thought you said she doesn’t recover well.”

Sylvie: “I was wrong. We were both wrong. She dominated.”

With Mechelle’s health assured, it is truly celebration time for Emma McGale. One of the first people in the ring to greet her is a former champ and good friend, Virani MacVicar. She gets Emma up on her shoulders so she can carry the new champion

The crowd applaud Emma, having been a fan of the violence of that fight. Violence is a way to any boxing fan’s heart. No doubt the executives at Star Sports will have felt it was a fitting contest to open the show.

Virani: “You’re heavy, babe. Are you sure you are a Featherweight?”

Though everyone knows what happens, the official particulars need to be announced. It’s bit of a formality, but its great for photo ops and finality.

Ring announcer: “Ladies and gentlemen, this stunning bout comes to a dramatic ending at 1 minute and 30 seconds of Round 9. Referee Victoria James stops the fight with one fighter no longer able to defend herself. Therefore your winner, by technical knockout and……NEW Featherweight champion of Canada is Emma ‘The Peach’ McGale…..McGale!”

Victoria raises Emma’s hand in victory as the crowd applauds.

Mechelle thinks: That dude sucks at his job. I’m sure I could do a better one and my ears are still ringing. Honestly, I must be concussed if this is what I’m thinking about at this moment. I’m in denial, probably.

Laila: “Aside from one moment, this was a really assured performance from Emma McGale, who was way ahead on the scorecards when this fight reached its conclusion. It will be interesting to see where she goes from here.” 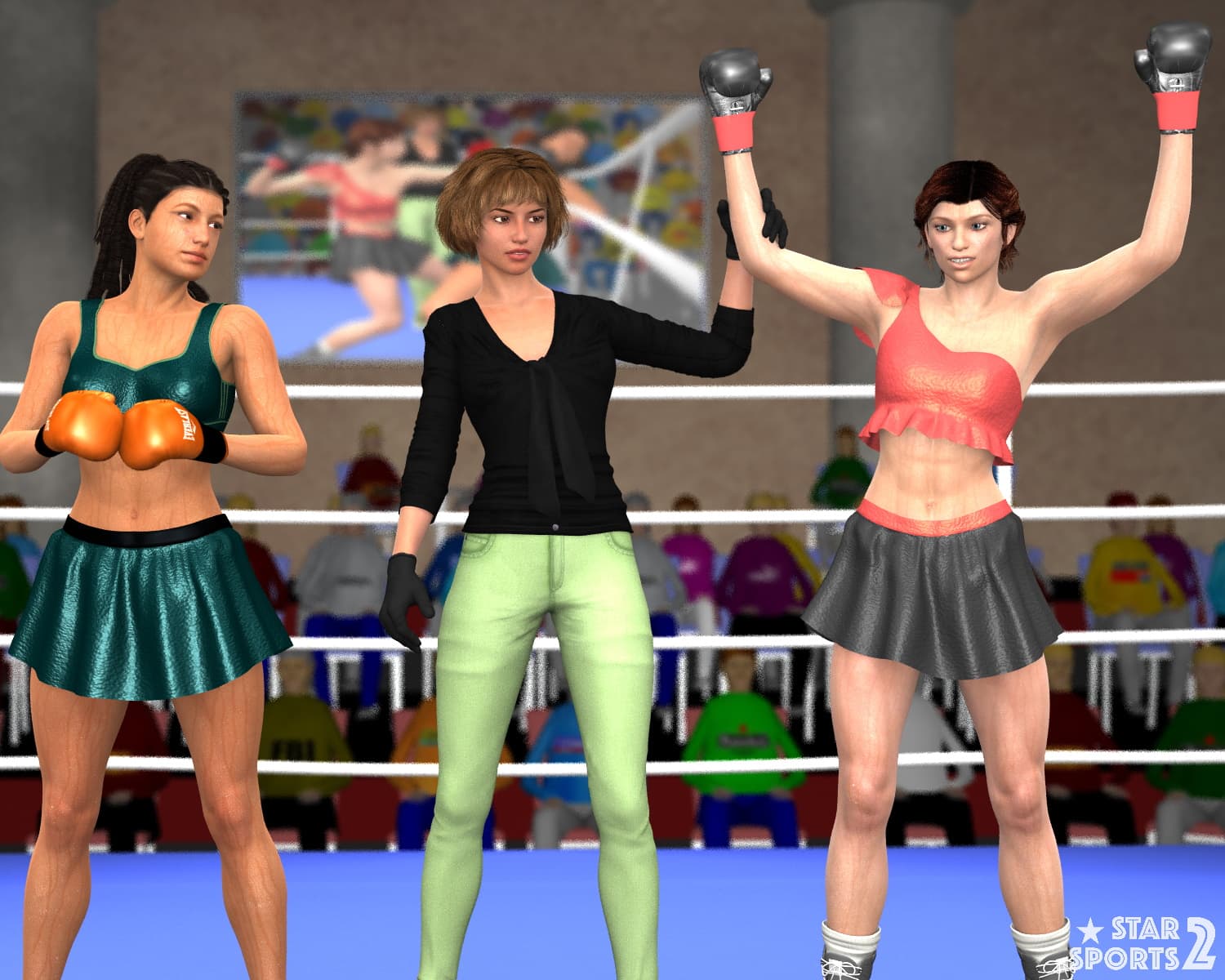 After the official decision, the two combatants are finally able to get a moment together to talk.

Mechelle: “Yeah. I’m okay. Going to have a splitting headache tomorrow. And every part of my midsection hurts thanks to you brutalizing it. But, hell, that’s just the job description. Congrats on the win, fully deserved.”

Emma: “Thanks. You were tough.”

Mechelle: “Nah, girl, you crushed me for most of the fight. I just had a few good moments. But one of them was a really good moment. How did you get up from that uppercut? You looked like you were out!”

Emma: “I’m pretty sure I was. That section of the fight is pretty fuzzy. I was just able to get up. It was a hell of a punch though.”

Mechelle: “You took my best and came through it. Then when you had your chance to finish me, you didn’t miss.”

Emma: “In fairness, you were an easy target.”

Mechelle: “Nah, all good. Thanks for getting this on TV. We’ll do this for a rubber match at some point?”

Emma thinks: I’ll knock you cold, but It’ll be fun.

In the ring is Laila Ali who interviews the new champion, Emma McGale.

Laila: “Emma McGale, champion of Canada, how does that sound?”

Emma: “It sounds absolutely tremendous. I’ve had a rocky road, but I’m glad I got to this moment.”

Laila: “I have to ask about Round 8. You were on cruise control until you got caught with a punch. What happened?”

Emma: “You can box a brilliant fight 99% of the time, but your opponent is also in there doing their best and that was a moment of brilliance from a very game fighter in Mechelle. She hurt me real bad. In many ways, I was lucky to get up.”

Laila: “Aside from that, was this fight all according to plan?”

Emma: “A bit of a slow start, but once I got going, I think I showed that I was the better fighter overall.”

Emma: “I’d like to thank my team, Sandra Blohm, and my promotional team, especially Anita Martin for getting me this fight. I couldn’t have done it without you.”

As Emma departs, there’s time for one more interview, this time with the former champion, Mechelle Gauthier.

Laila: “Mechelle, commiserations on a tough fight. What do you think the difference was between the first fight and this one?”

Mechelle: “Honestly, it felt like this was a different opponent. The Emma I fought in the first fight was a good fighter, but this version of her was just dominant, really. I felt like I was under siege for most of the fight. She’s just so physically strong, and she makes you feel it.”

Laila: “How effective was her work to the body? She really seemed to make it a focus this fight.”

Mechelle: “I’m glad I took some shots to the head, because they dulled the pain my body was giving me.”

Laila: “What’s next for you? Is a rematch something you are interested in?”

Mechelle: “Fighting for a title is always in my plans. But I think I need to get back in the gym and level up before I seriously consider fighting Emma again. But make no mistake, I intend to get the Canadian title back!”

Laila: “I hope we can bring that match to our audience when it happens. Thank you for your time, Mechelle.”

Once the media personnel are out of the ring, it’s time for a photo opportunity with the new champion.

Emma: “Everyone strike a pose.”

A victorious Emma thrusts her arms into the air like she’s a character in a Rocky movie, while Virani goes for a pose straight out of a fashion runway.

Sandra thinks: One fight, one title. Not bad, Sandra. And the more I see Emma, the more I believe she’s capable of fighting at a higher level than this. 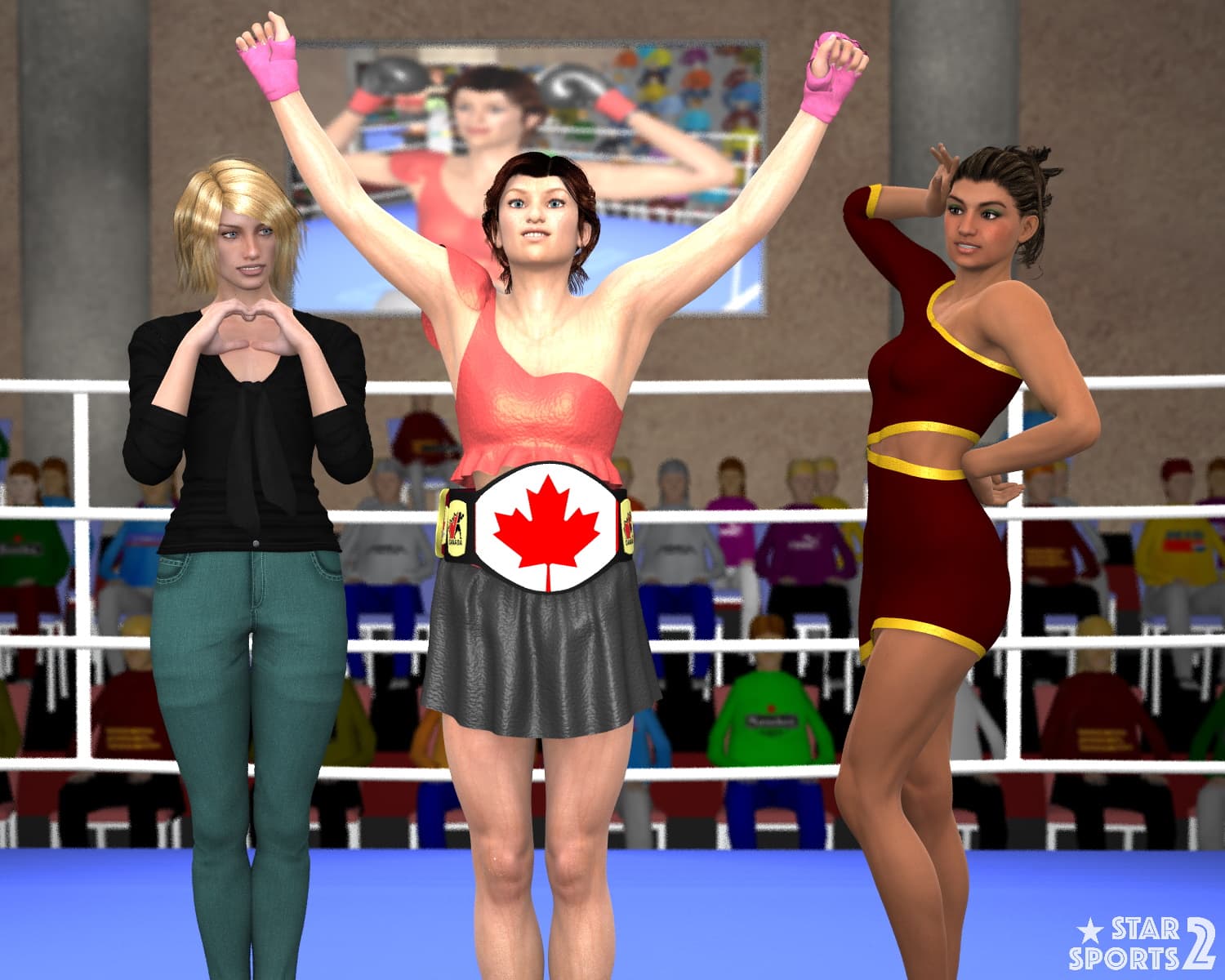 Boxing Canada was quick to take note of Emma’s victory, posting a graphic on their Twitter of Emma’s win.

In the locker room, Emma and Virani are having a laugh about it.

Virani: “Enjoy it, Em. This is the fun part about being a champion.”

Emma: “So what’s next. Do you want to fight me for the championship?”

Virani: “We do that enough in sparring. It’s yours, enjoy it.” 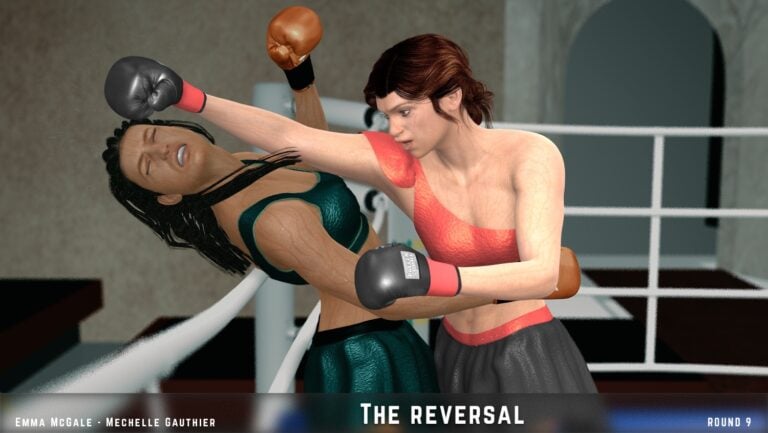