After being thoroughly crunched in the last round, Kayleigh is understandably a bit on edge as the Round 6 begins. The challenger, really up against it for one of the few times in her career, falls back on an unexpected source – her training with Alesia Schumann and the lessons that the former Super Lightweight champion was able to import.

Kayleigh cedes space, inviting the Empress to come on to her. Hee Jung, with desire to continue on from her successes in the last round, is happy to do so. The Korean champion pressures Kayleigh with a jab that is far more successfully used than she had earlier in the fight.

‘The Fluke’ retreats, but with an understanding that she’s just biding her time. When Hee Jung makes a mistake, miscalculating a right hand – Kayleigh is already taking advantage, landing a solid counter right hand that impacts Hee Jung’s jaw.

Amanda: “You’d be forgiven if you thought you were seeing things in reverse – it is indeed Kayleigh Parsons who is drawing Hee Jung Park in and landing successful counters. Talk about flipping the script.”

Kayleigh’s effective work on the counter is enough to earn her the sixth round in what turned into a somewhat dull affair.

Early on in the round, Kayleigh makes her intend clear, as she gets the better of an exchange with the champion, her right hand jolting the Empress with a compact right hook.

Amanda: “Parsons has shifted gears in this fight enough times that she must be giving the Empress fits. There’s just such a diversity of skills in her portfolio, and she’s using them all tonight to great effect.”

As the tempo of the fight increases, Kayleigh increasingly uses her physicality to her advantage. It’s not something that comes naturally to her, but after having worked on it with Alesia in her recent sparring, it’s fresh in her mind. As the two warriors trade with increasing frequency, Kayleigh uses her arm cleverly to disrupt The Empress, forcing her off balance, and making it difficult to land a punch.

Amanda: “Being the bigger, stronger fighter is not something that Kayleigh will be used to, but she’s doing a good job of using that to her advantage, now that we see these two dynamos really throwing caution to the wind here in the 7th.”

Speed is a killer in boxing. If you can beat your opponent to the punch, you’ll do damage before they can react. Deep in fights, speed is harder to come by. You are tired, you are weary, you’ve been in a fight for your life for many long minutes. But still, speed is important. Being first is critical.

The last few rounds Kayleigh has seen the older champion slow down. It’s not obvious except to the fighters themselves. The champion is wearing down. Kayleigh Parsons knows this is the time to take risks.

So she does. It’s a display of her own confidence that she plants her feet in the middle of the ring and loads up on punches against a fighter who is more than capable of landing devastating counters. The Fluke is just certain that she won’t be like the fighters before her that fell to those black Everlast gloves.

After a somewhat innocuous exchange, a lighting bolt of a right hand comes from Kayleigh. It connects right on the chin of the champion. 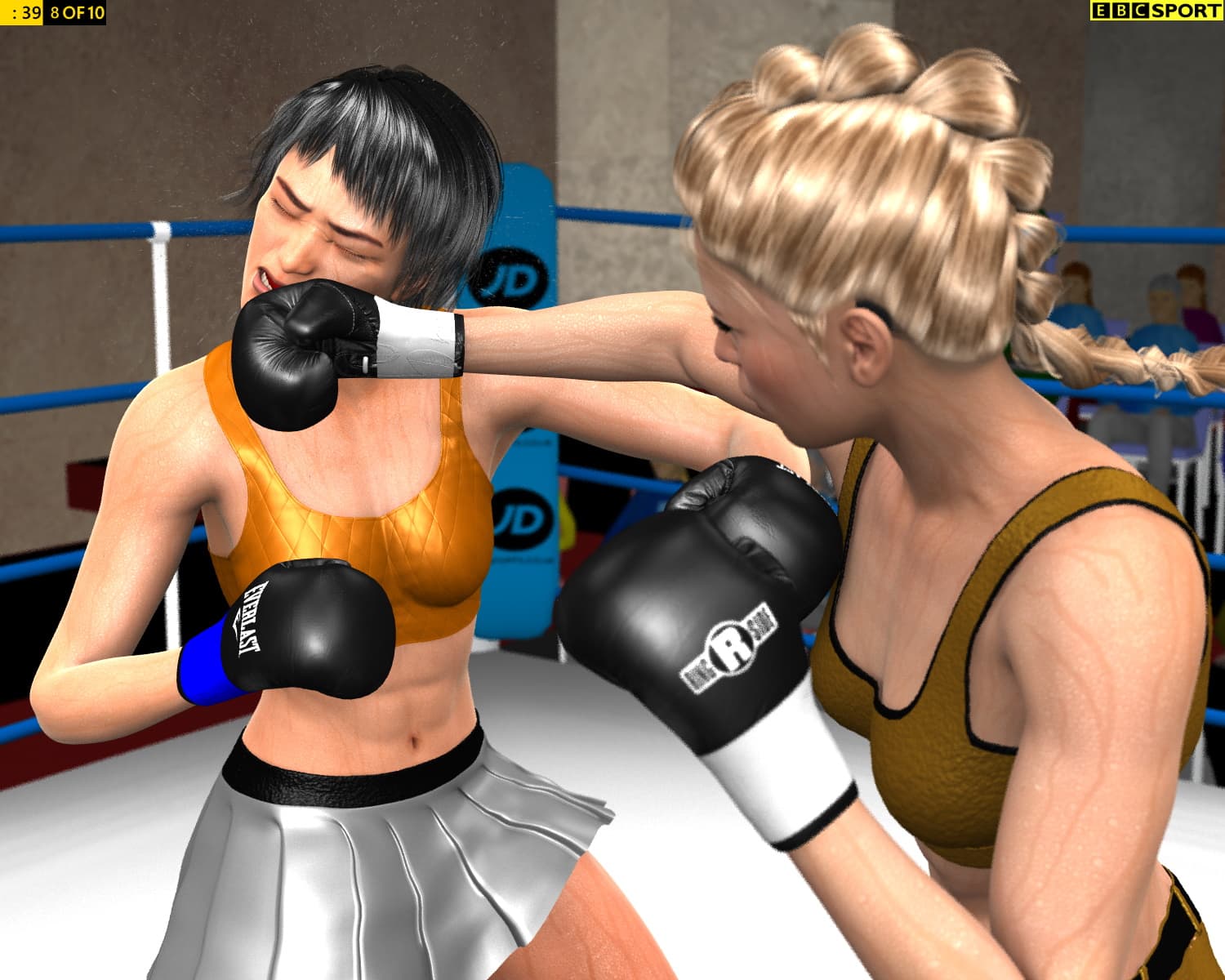 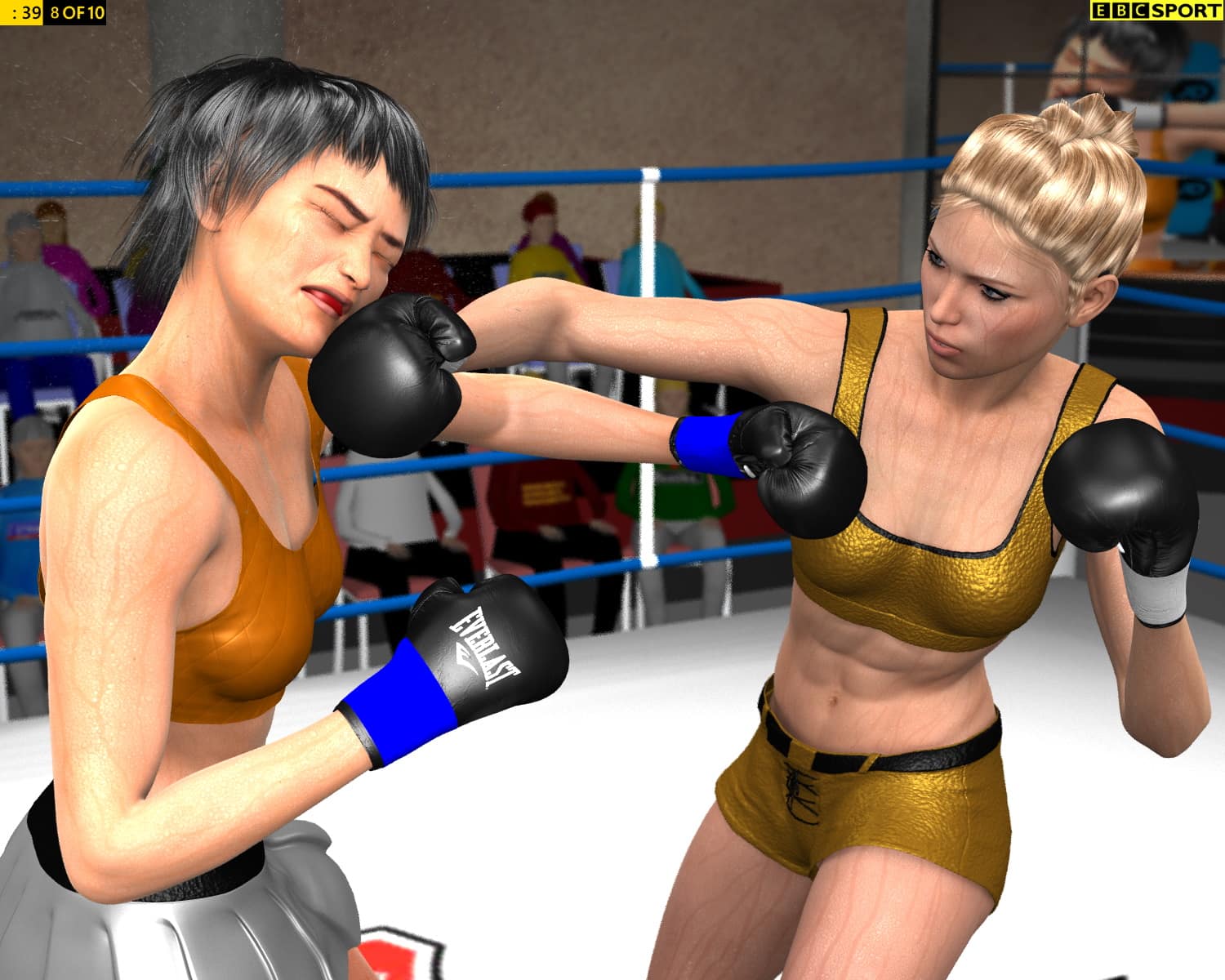 Hee Jung Park collapses as her body won’t respond to her commands. It’s like when your word processor is ‘hung’ and you have to wait for it to respond, or reset.

Kayleigh steps out of the way of the champion as she falls to the canvas for the second time in as many fights – The Empress is down.

Amanda: “Down goes Hee Jung Park! Down goes the champion! It was a right hand from Kayleigh Parsons that did the damage! Oh the champion is in deep trouble now!”

Kanti shoos Kayleigh to a neutral corner, and for once, there’s no celebration from Kayleigh as she walks. There’s no time to lose focus.

Kanti thinks: Solid knockdown, but she’s not out. No way I’m stopping this one.

By the count of five, Hee Jung has convinced her tired and worn body to get to its knees.

Hee Jung thinks: There is no way I’m staying down. I can still do this. I will get up at 8. 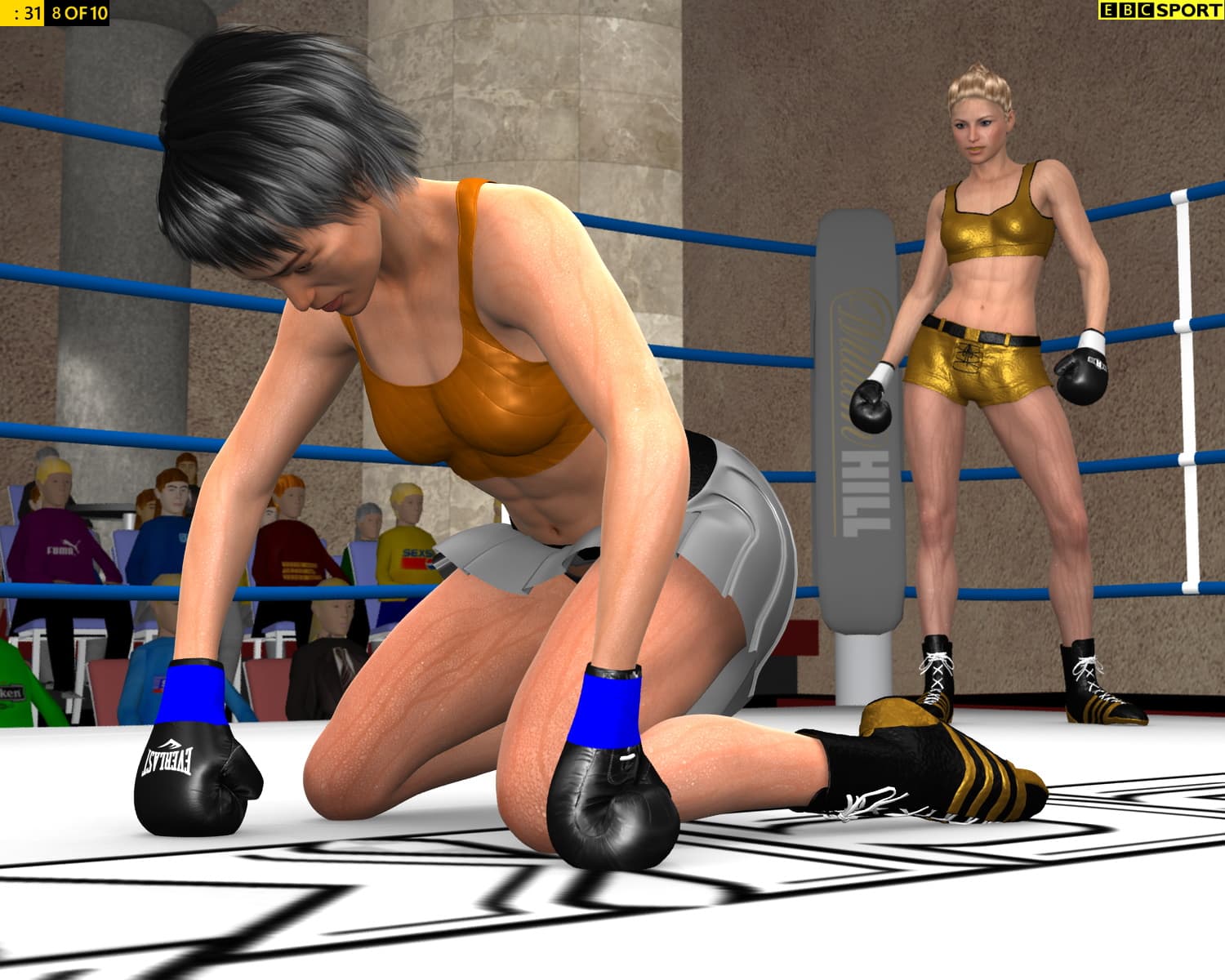 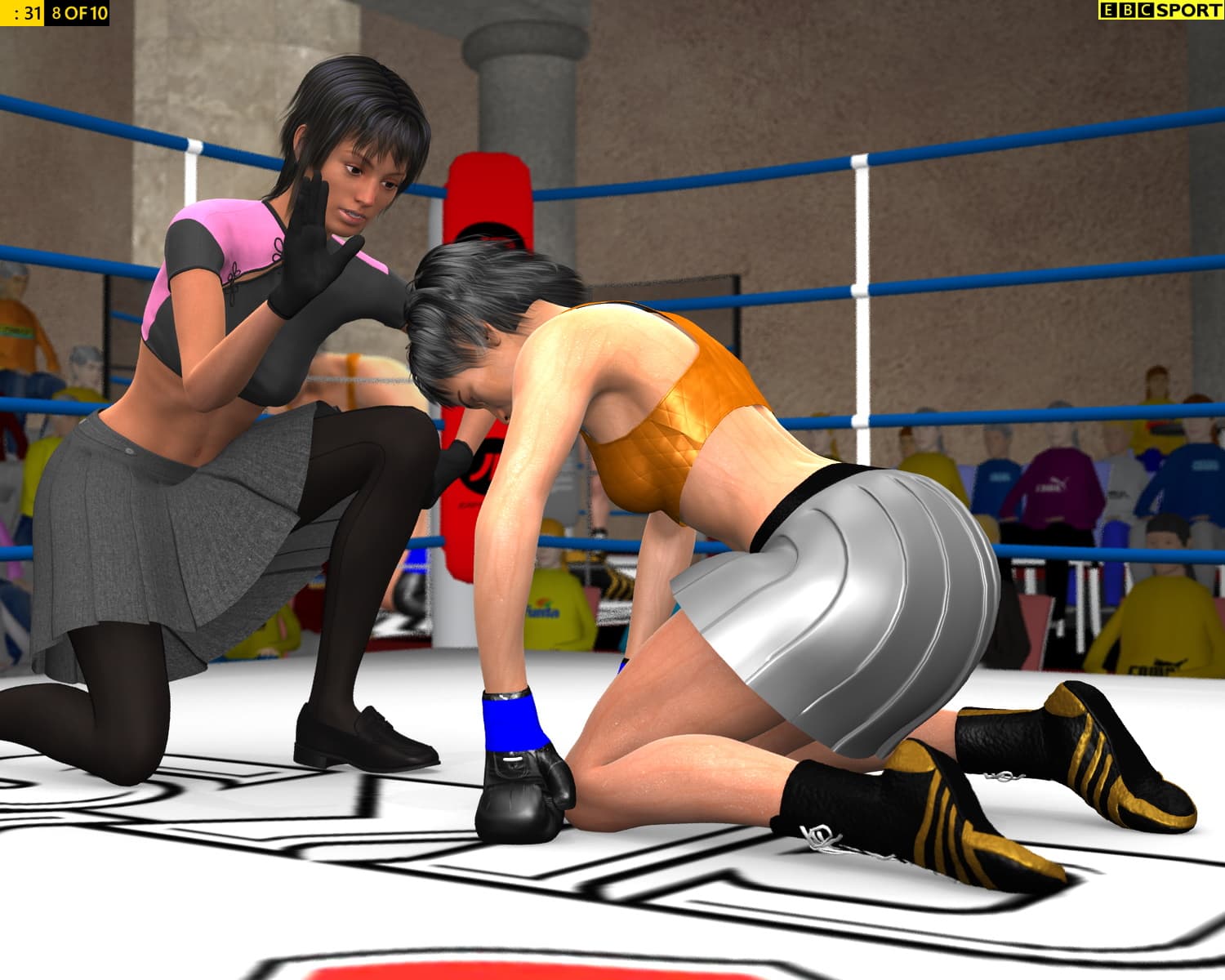 True to the type of fighter she has been her entire career, Hee Jung does get up at 8. She puts up her gloves to impress upon the ref her will to continue.

Kanti thinks: She’s hurting but she’s still in there.

The veteran champion is able to prevent any further major punches landing, but the knockdown firmly puts the fight in Kayleigh’s favour.

In the champion’s corner, Darius exhorts his fighter that there’s probably no path to victory that doesn’t involve putting Kayleigh on the canvas. It’s do or die time.

With her back against the wall, what does Hee Jung go out and do? Why she produces some of her best boxing, throwing combinations that surprise Kayleigh. She reaches deep into her bag of tricks to connect with a clever bolo punch that comes from a wide angle. It swings around and catches Kayeigh right under the chin.

The golden blonde takes an unsteady step back, but seems to be okay.

Round 9 is a siege and The Empress is the one doing the sieging. What do you do when under siege? You endure. That is what Kayleigh does. She stops a few too many punches with her chin for Jim’s liking but she also avoids a fair few either by tying up the champion or just by making them miss.

Kayleigh applies a last strategy that she learned from sparring with Alesia, decoupling leg and upper body movement. This flexibility allows her to be harder to hit, and potentially to hit back, but such is the momentum of Hee Jung, that she doesn’t bother. She knows not to get in the way of a locomotive with momentum.

Amanda: “A dominant round for Hee Jung Park in the 9th. She seemed to maybe have Kayleigh hurt at a few moments, but ‘The Fluke’ endures and will see the 10th.”

The last time that these fighters will be able to get advice in this one. Both coaches attend to their fighters swelling before giving their final motivational speeches.

Jim: “You are up on the scorecards, I’m nearly sure. All you need to do is stay on your feet and you can walk out of here world champion. Don’t take risks, don’t trade. Stall her.”

Kayleigh: “I’m going to go out there and be me, then. I don’t want to lose and know I held something back.”

Darius: “We’re down. You need to put this girl on her ass at the very least.”

Empress: “I’m going to give it everything. Anything you see that I can take advantage of?”

Darius: “She’s not unhittable. You will have to throw in bunches. Just one punch isn’t going to do it. Remember, this is for your legacy. Don’t let it slip.”

Empress thinks: Once more into the fire. 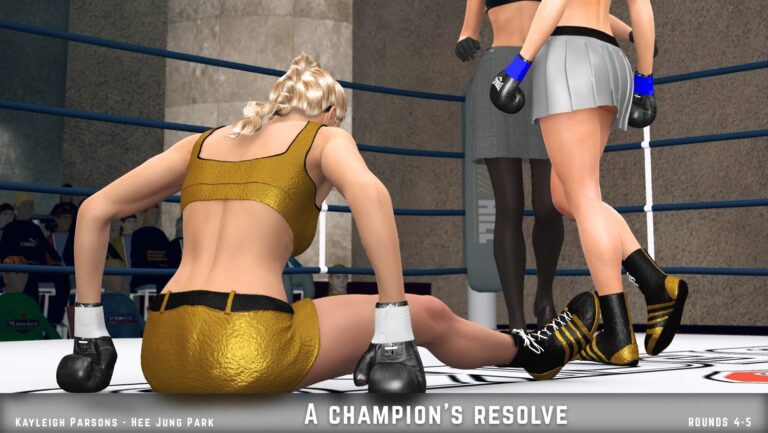 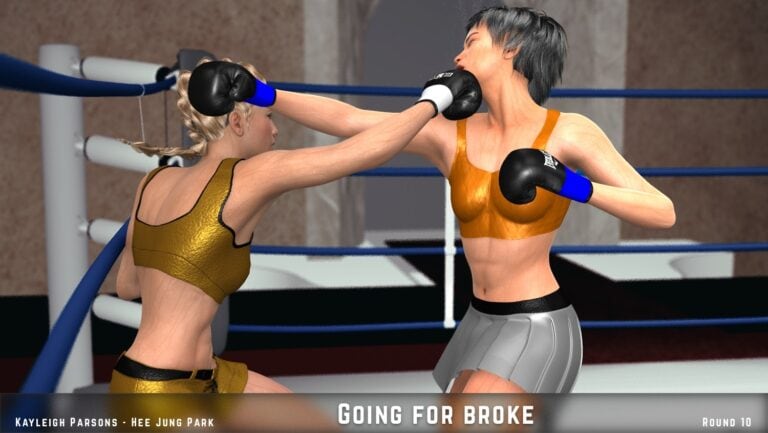