After the final bell, Jim Parsons climbs into the ring to be with his wife. He’s happy, first and foremost that his wife has come through another contest (at least relatively) unscathed.

Second he’s happy because it seems like she may have achieved her dream of becoming world champion.

Kayleigh: “It’s been fun to go on this journey with you.”

Kayleigh: “Not by a long shot.”

Amanda: “Here it is, the moment of truth. The judges decision are in. I myself had it 96-92 Parsons, and if that is correct, this decision should be unanimous.”

Ring announcer: “Ladies and Gentleman, please give a warm ovation for these two warriors!”

Ring announcer: “After 10 rounds of action, we go to the judges scorecards. Judges Bruno Gardena and Thomas Church have it 96-92, and judge Amanda Hincapie has it 96-93 all for your winner…”

There’s a long pause, that probably feels like eternity for both fighters.

Kayleigh shouts for joy as her victory is confirmed. While Hee Jung looks disappointed, there’s not much protest from the now former champion’s camp.

Amanda: “We have a new champion! Kayleigh Parsons gets it done by a unanimous decision.”

Virani MacVicar
@CanadianCobra
Seems like The Empress fell off a lot since when I faced her. Kayleigh won tonight, but she still owes me a rematch.
Toronto, Ontario

Kayleigh celebrates with her team for a few moments while Hee Jung shares commiserations with her corner. But for Kayleigh, there’s something important she has to do. She seeks out Hee Jung as the former champion is in the middle of the ring.

Kayleigh: “Hee Jung. It was an honor to compete with you.”

Kayleigh bows low to the former champion,  no disrespect or sarcasm in the stance. Just one fighter paying tribute to another. Hee Jung, surprised by Kayleigh, takes a moment but then returns the bow.

Amanda: “What a moment that is. A changing of the guard in the Featherweight division.”

Amanda: “Let’s get a word from the new champion with our ringside correspondent, Alesia Schumann.”

Alesia: “Kayleigh Parsons, champion of the world, how does that sound?”

Kayleigh: “Incredible. It’s something that at times I didn’t think would happen, but now that it has, it’s a culmination of all the hard work I’ve put in.”

Alesia: “Talk to me about this fight. How hard was it?”

Kayleigh: “You told me about championship fights and how hard they are, but I didn’t believe you. Now I do. Hee Jung is an amazing opponent. Did I always believe I was the best Featherweight in the world? Yes. I told everyone that. That doesn’t mean that Hee Jung is not fantastic. She did some things in the ring tonight I didn’t think were possible. I think I had a great game plan and a great camp, and some of those intangibles carried me over the line. But I take nothing away from my opponent. This was a showcase of two elite fighters.”

Alesia: “Some magazines have talked about you being the next Empress…”

Kayleigh: “Let me stop you there. I’m a hell of a fighter. Best in the division, no doubt. But Hee Jung is a four-division world champion. She has a career of accomplishments that I cannot claim. There’s only one Empress, and that is Hee Jung Park. I’m just Kayleigh Parsons. The Blonde Bull. Let me be the first Kayleigh Parsons, and not the next Empress.”

Alesia: “Have you thought about what is next? Michaela Sommer has been public about wanting to take on the winner of this fight.”

Kayleigh: “I barely know who that is, but I promise that I will bring this girl to London, and then show her some English hospitality and knock her out.”

Alesia: “Any words for the fans?”

Kayleigh: “Just that they are the best. I love my fans here. I told them I’d be world champion and here I am. Keep coming here, and I’ll keep entertaining you, that’s my promise.”

Amanda: “And now lets hear from Hee Jung Park, who has graciously stayed for this interview.”

Alesia: “Hee Jung, end of an era tonight, how do you feel?”

Hee Jung: “Like I went 10 rounds with an elite fighter. I knew coming in that Kayleigh Parsons was good, but she showed maturity and an evolution in skills that was unexpected. I don’t like losing, but I admit I was fairly beaten tonight. I have no complaints.”

Alesia: “What’s next for you? Are you interested in a rematch?”

Hee Jung: “If I felt like a rematch would go differently, I would be interested. But I feel like this was 100% of what I had to offer and it wasn’t enough. I see no point in a rematch, unless I can earn it from the rankings.”

Alesia: “Were you thrown off by the way that Kayleigh started the fight?”

Hee Jung: “Honestly, yes. She talked a big game about wanting to win by knockout. Then she came into the ring and fought a disciplined, counter heavy style. It was not expected. We knew that Kayleigh can fight many different styles, but we expected the more tactically naïve version of Kayleigh Parsons. That’s not what we got. That allowed her to build a lead that she used well in making me take risks that I normally would not have taken. That was the difference.”

Alesia: “You’ve talked about your legacy in your leadup to this fight. What does this fight add to it?”

Hee Jung: “In boxing, I feel like courageous losses can add to a legacy, and that is what I accomplished tonight. I make no excuses for being older or having many more professional fights than my opponent. I feel like I’m not done adding to my legacy, and I still feel like I have more to offer the sport both in ring and out. I don’t think I’m done quite yet.”

Kayleigh: “Ally, come here! I want a pic with you.”

Alesia: “Anything for you.”

The current WBU Featherweight champion and the former WBU Super Lightweight champion pose together for a picture that should delight most of the audience, or at least the portion cheering for Kayleigh.

Alesia: “Congrats again. Looking even better with the belt.”

Kayleigh: “Thanks, couldn’t have done it without you.”

Alesia: “I did my little part to help. Now this is your moment, champ.”

Kayleigh shoos the other people in the ring away for one last picture, one mantle. Kayleigh strikes a confident, sexy pose, as the camera snaps pictures.

Kayleigh thinks: Never going to get tired of this. 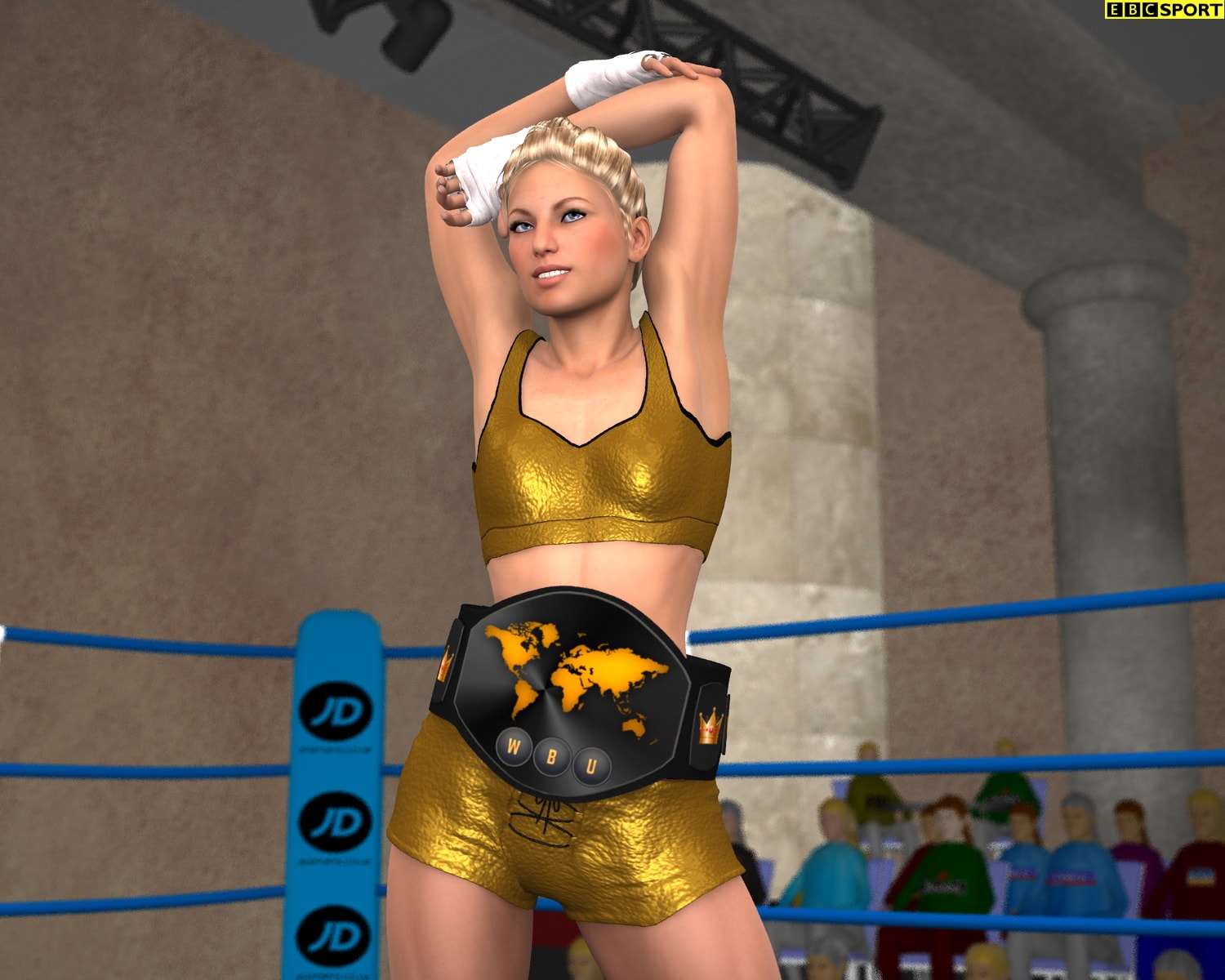