Round 3 begins. Mercedes told Chelsea to increase the movement to avoid counterpunches while Sam asked Taylor to multiply combinations.

The defending champion goes on a strong run in the early going. Dynamic on her feet with her head moving both while throwing hands and reacting to incoming shots.

More than a minute in, Taylor is in the middle of a big combo and Chelsea leans to the left to crack the middle of her face with a short right.

Jim: “Carter is on target with a solid counter. The technique is flawless to hit while avoiding Grant’s right hand.”

Warren: “It seems to me that she learned a lesson from the schooling received against Amber Rose. She retains offensive firepower while discarding the naive approach that got her tagged so often.” 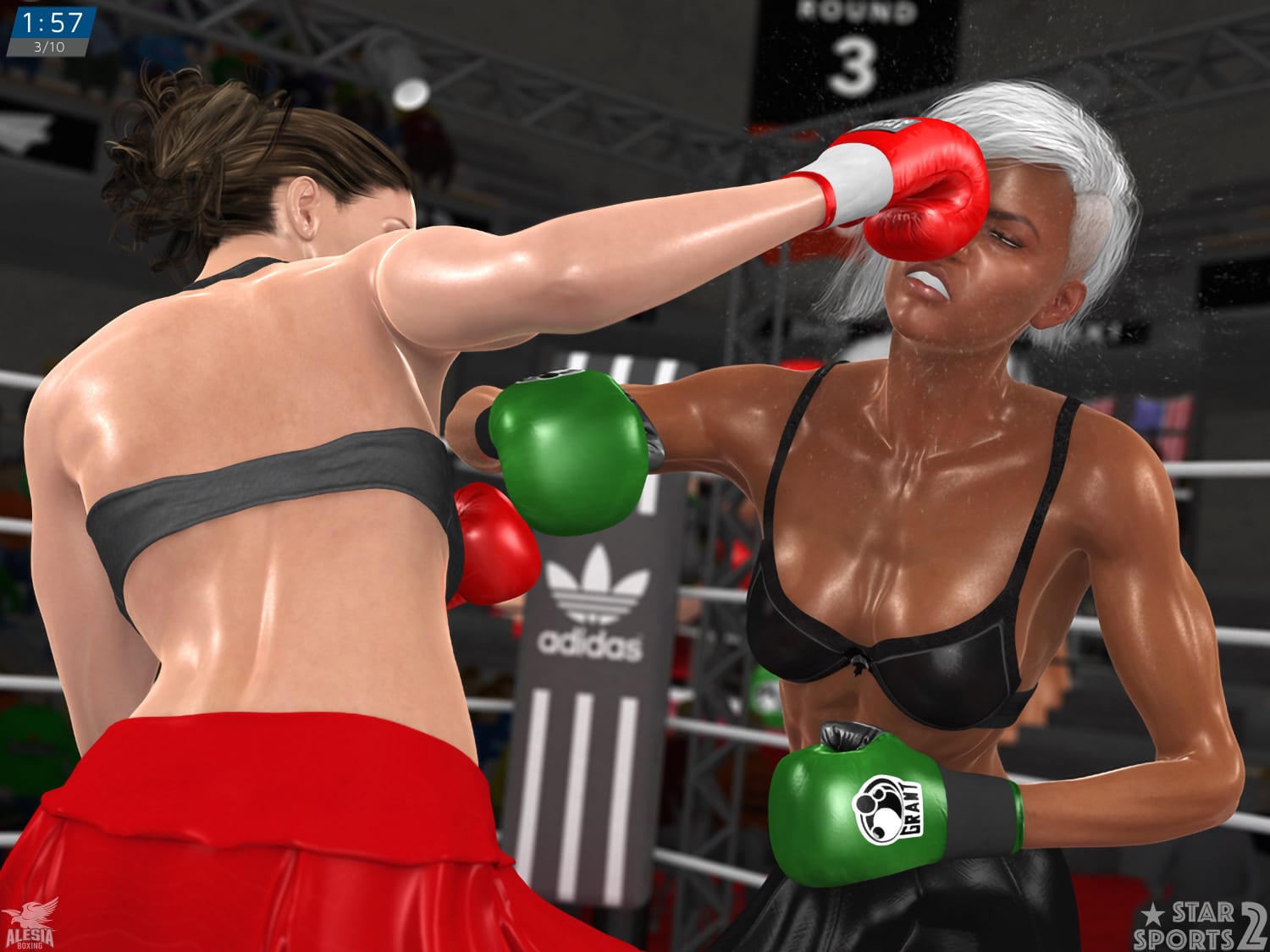 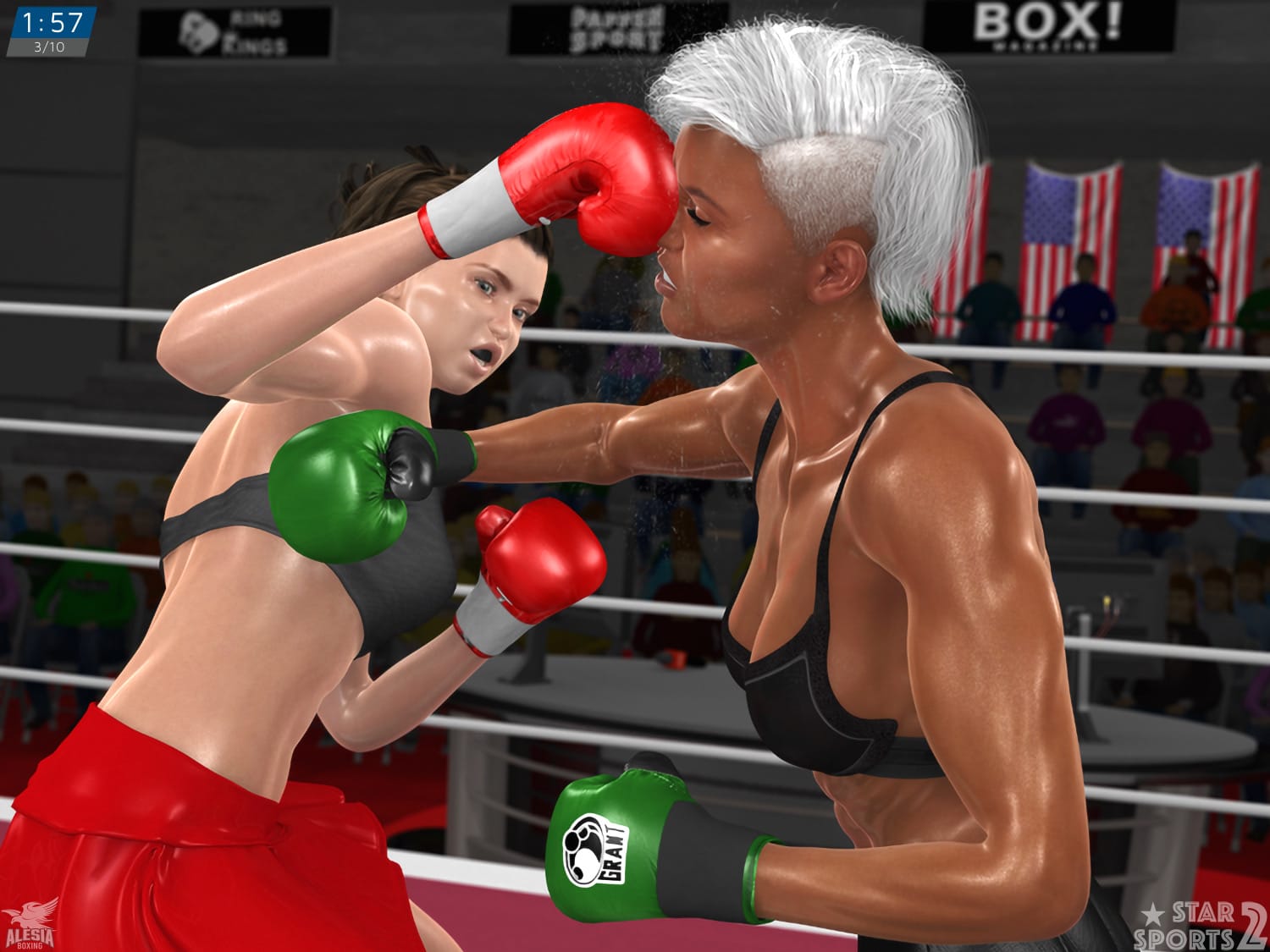 A game of position

High Voltage is truly hyperactive in this round. She lets her hands go at all times in response to pressure instead of picking single shots. Using her range to work effectively from outside.

Jim: “Carter is putting on a boxing clinic against one of the most dangerous fighters in the world, Warren. Dominating the action with long shots, especially the jab.”

Warren: “Colour me surprised. Grant made it a habit to pick opponents apart with a combination of speed and high ring IQ but she’s the one getting outboxed at the moment.”

At the break, Sam wants Taylor to go downstairs more often. “No headhunting. Work the basement.”

The white-haired destroyer does it with pinpoint accuracy to impress the judges. She softens the pressure to give Chelsea the liberty to initiate clashes, before digging in with heavy punches downstairs.

A left in the liver at 1:27 makes the brunette grunt.

Taylor thinks: “Oh yeah. I can hurt this chick. I’ll find a way.”

Right before Round 5 begins, Mercedes orders a return to boxing from outside and for better use of long arms.

The girl in red and black delivers during that engagement. She storms back in with flurries initiated and often ended with the jab to disrupt Taylor’s punching patterns and keep her on her toes.

Jim: “Carter is putting more points in the bag, in my opinion. Solid ring generalship to make a successful title defense a credible outcome.”

Warren: “Of course, I’d warn about taking the challenger for Granted, if you know what I mean. It looks to me like she’s ready to endure the onslaught to produce something in the second half of the match.” 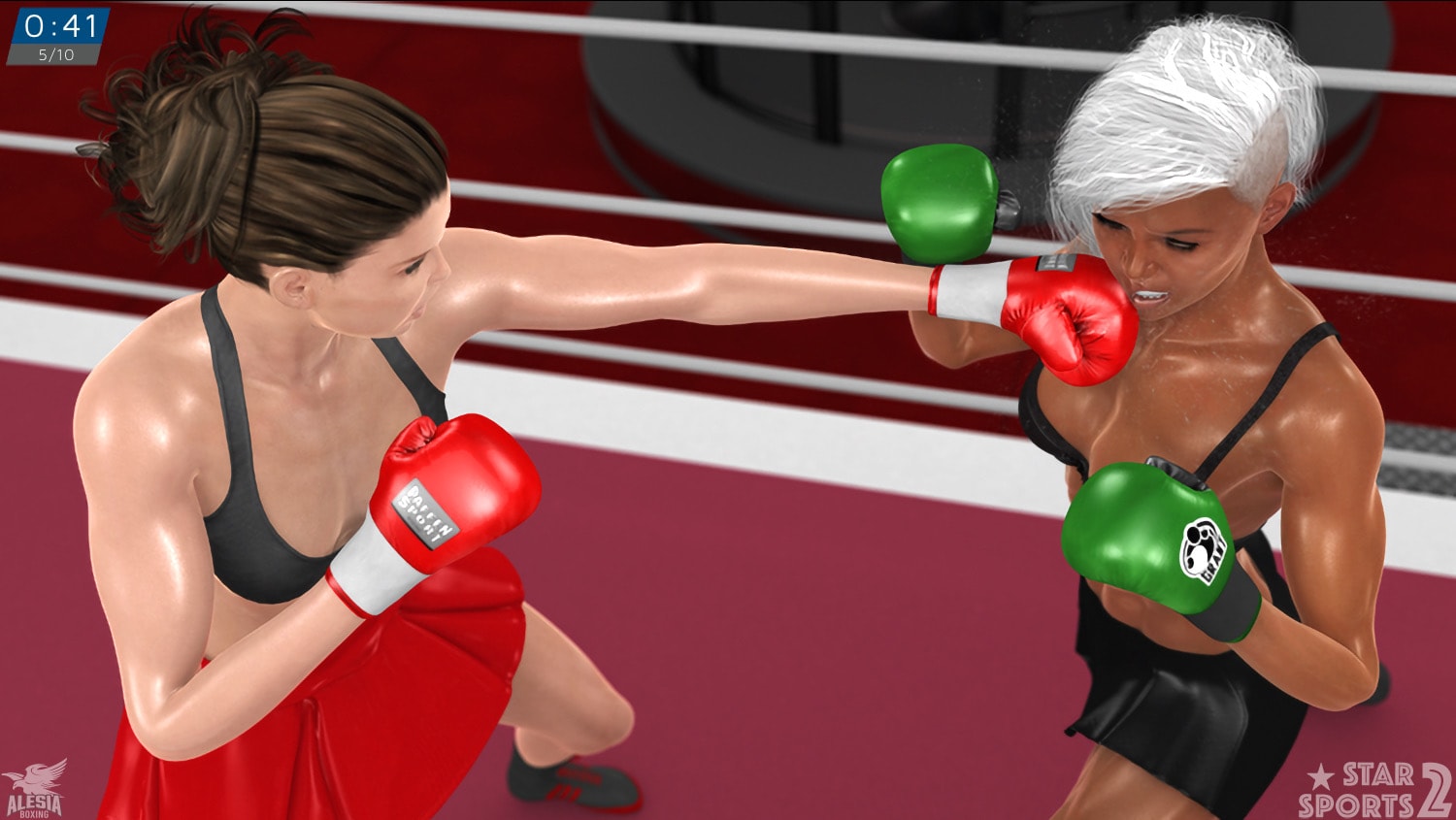 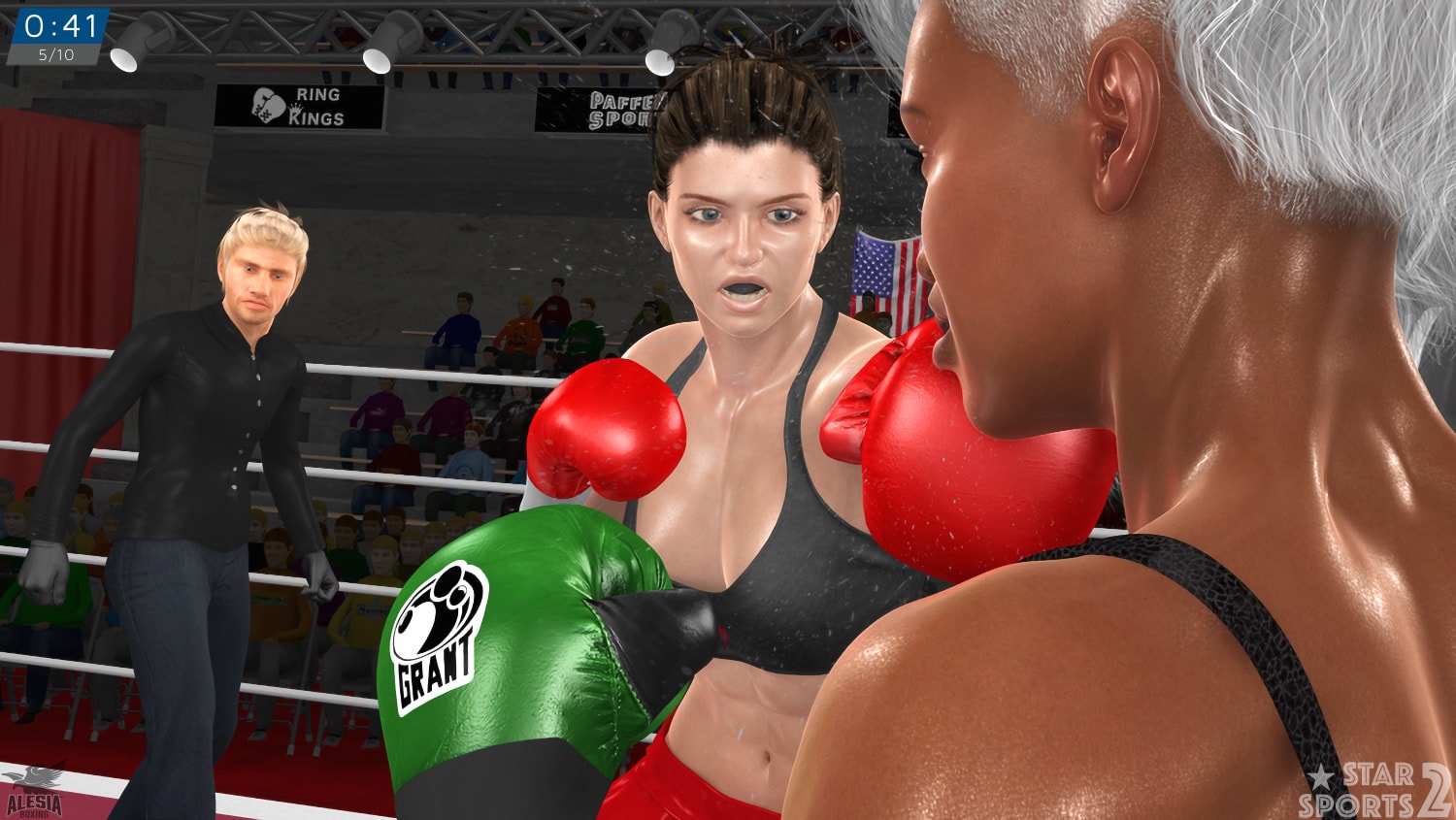 The curtain falls on Round 5, with special guests Elsie Nadege and Sky Houghton discussing.

Elsie: “I’m impressed by Chelsea. I said she’d win and I think she can pull it off. Taylor’s super hard to contain and apart from Round 4, she’s done it so far.”

Sky: “Yeah. Can’t be complacent against her, though. I saw her drop people with one combination and boy, were the opponents hurt. The kind of chick you want to keep at a distance to avoid the power shots.”

Elsie: “You fancy facing her?”

Sky: “My sights are on Steffi Slater. I’m her mandatory. I want that world title now.”

Sky: “I’d expect Final Bell to put Alesia in the way. Which is fine. No offense to any of the other ranked fighters but she’s the one to beat if you want to be legit. She’s the gold standard.”

Speaking of the devil, she proposes her scorecard in a reporting update.

Alesia: “Five rounds of action are in and I’m sure that you are well entertained. I score it 48-47 in favour of Chelsea Carter so far after a lot of back and forth. A coaching battle is underway in New York, and who knows if small adjustments might make the difference in the long run.”

Jim: “Do you see anyone displaying anything that helps to predict a winner?”

Alesia: “Frankly not. This is one of those matchups that might be decided by the odd slip-up. Both Chelsea and Taylor have to avoid a costly mistake here, knowing how their counterpart can explode in no time.” 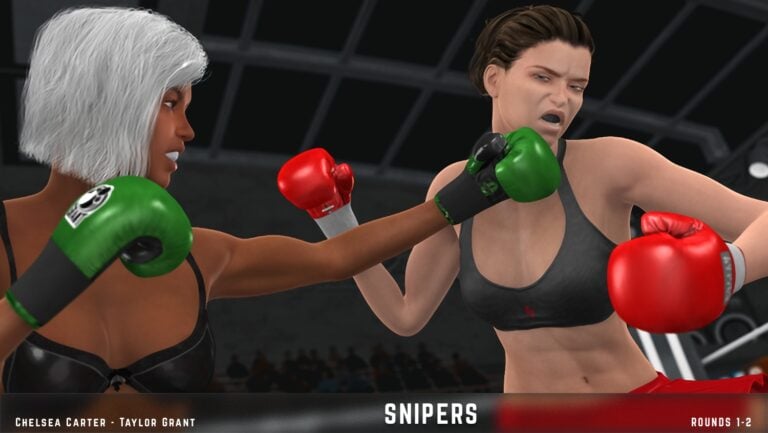 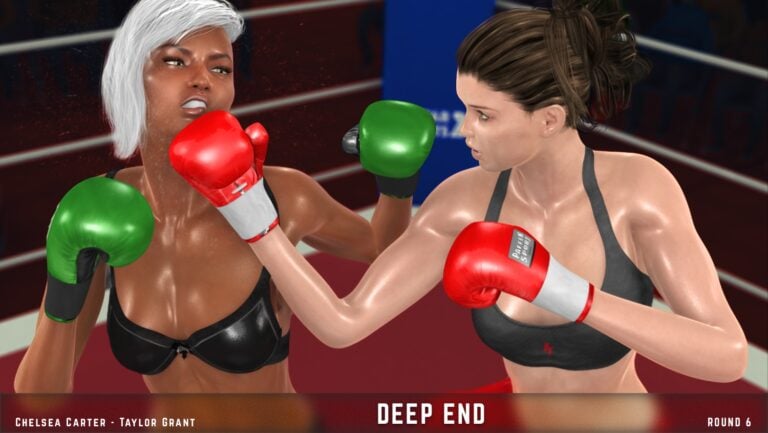