We first travel to Prague. Alesia Schumann and Anna Schwartz spend a little time away as a couple. Away from the boxing industry and the cameras that they face regularly.

Check-in with the Diva

There’s a mix of European architectures in this city such as Romanesque, Gothic, Renaissance, Baroque, and Rococo. People in the know will find the odd quiet site where you can enjoy good company instead of bumping into hordes of tourists.

Alesia and Anna are having a lovely time together. Most of it without discussions about boxing, but they occasionally have a word about the sport. We eavesdrop when the most serious conversation takes place.

Anna: “I’m glad your morale is up. The defeat to Steffi didn’t seem to affect you too much.”

Alesia: “Well. At some point you learn how to accept what you don’t control. It’s done. Can’t change it but I learned something. I’m only taking on my first pick of opponent in the future, though. Win or lose, I’ll do it by choice. Not someone else’s.”

Anna: “Who do you wanna fight next?”

Alesia: “It’s either Taylor Grant or Melanie Spitzer. I don’t know which yet. Regaining the German championship would be great. I gave it away for you, not for that sociopath.”

Her girlfriend laughs. “Revenge is always fun as well.”

Alesia: “Sophie had some of that with Takara. My turn will come. But enough about me. I really love what you do at Box TV. You’re a fantastic broadcaster.”

Anna grins: “You’ll get rewarded for that comment tonight.” 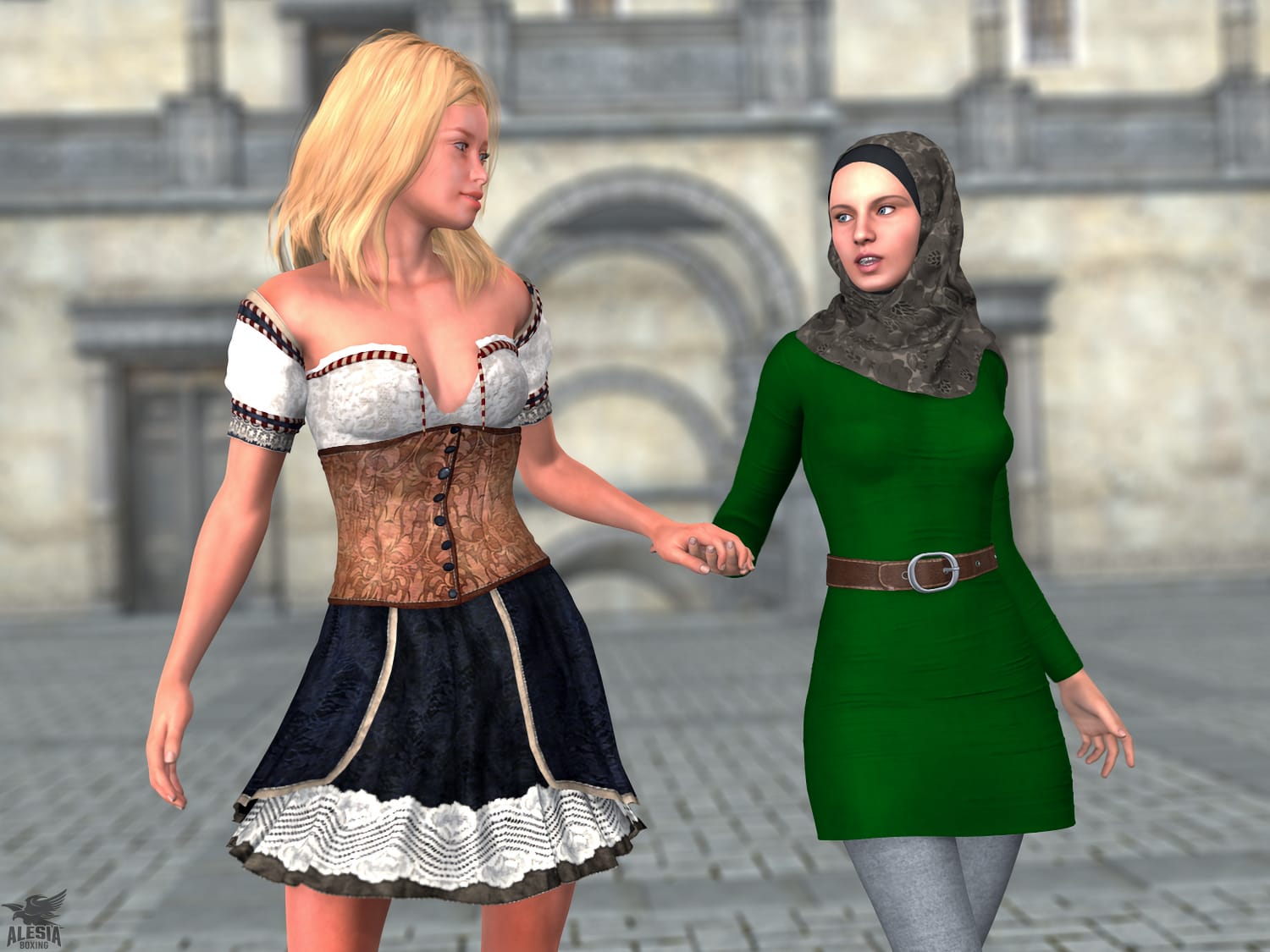 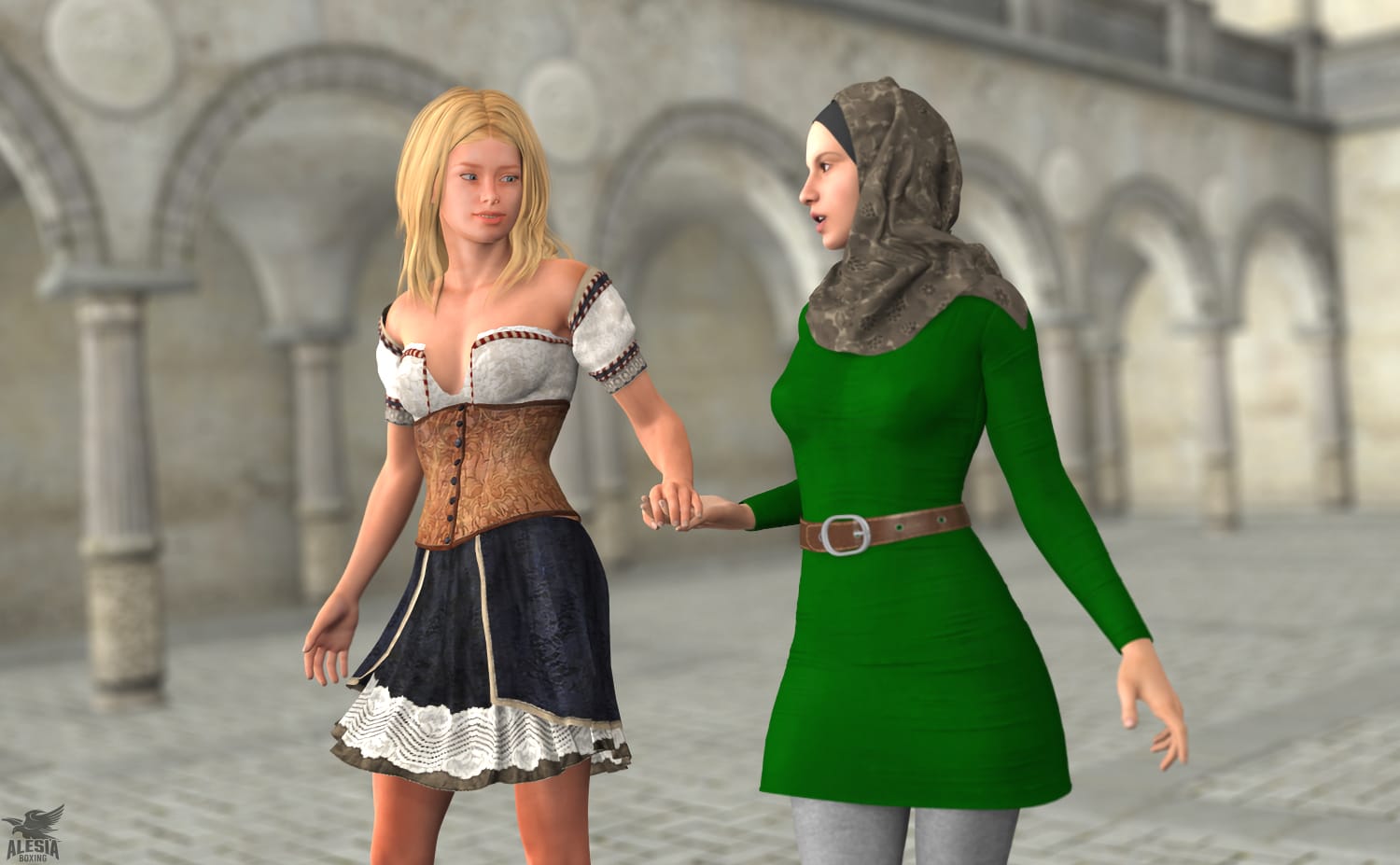 Another pair is in London, England. This trip is not a romantic but one done by close friends. Sophie Schumann and Akane Watanabe are finding places to see in the old city before hunting for food and beer in the evening.

There’s more boxing talk between these two, and the most lively conversation regards Sophie’s next opponent.

Akane: “I totally want to know who you’re going after. Those wins against Megan and Takara were great. I think you turned a corner.”

Sophie: “Actually, I want your opinion on that.”

The Japanese-born German raises her eyebrows in excitement. “Tell me!”

Sophie: “Management sees three options. Heather Barker, Astrid Olsson and Zohana Patel. Before I say anything, tell me what you think.”

Akane: “Interesting. Astrid just won a match but given how she works, she’d be up for it in a matter of weeks. Tough customer. Not as talented as you but then again. Leonie is a bigger talent who gave her a beating but still lost. Astrid’s big. Unorthodox. Physical. But you’d beat her.”

Akane: “Zohana Patel? You know I love you dearly but I think this would be one match too soon. Fine tune your skills a little more before going for the world title. Pound for pound, she’s the most dangerous and she’d probably be happy to have you early before retiring.”

Sophie: “You reffed her. What do you think?”

Akane: “Good all-rounder. No big flaw. No one’s figured her out since the move to Lightweight. She’s been knocked down but she’s willing to die in the ring to win. A fearless warrior who sent opponents straight to hospital. You gotta match that frame of mind. If you do that, you’ll win based on talent. Now what’s your take?”

Sophie: “I’d take either of these three. They’re all interesting. But honestly, I think I can beat Zohana even now. “

Akane: “It’s your career. But I say Heather or Astrid is the best choice.”

Sophie: “Fair enough. Let’s get food. Gotta show you traditional stuff. Fish and chips. Then the pub. Wait ’til you try an English IPA on tap. They don’t overdo the alcohol, but the hops are delightfully bitter.”

They cackle and make people around them laugh.

A world champion is enjoying her lofty lifestyle in Egypt. Zohana Patel, from India, is on a visit with her coach and friend Parvati Tavade. Exquisite sights and sites, amazing food and an exotic feel you only get in the most ancient of civilisations.

While the main focus is having fun, boxer and trainer definitely talk about the sport.

Zohana: “I’ve had an amazing run. My concern is calling it a day at the right time. I’m still on top but I don’t want to be retired by someone. I want to retire on my terms.”

Parvati: “That’s the right mindset. You’re already sure to get early inclusion in the Hall of Fame. You don’t want to find out in the ring when this is one fight too many. Who do you fancy?”

Zohana: “I see three. My logical challenger is Heather Barker. A no-brainer for the next fight or the one after that. I wanna be the one who stops her.”

Parvati: “Agreed. Amazing fighter and she can get us money.”

Zohana: “Sophie Schumann? The only ways to stop her from being a world champion are either taking her on now or dropping a tactical nuke on her bedroom.”

Parvati: “Yeah. She’s got talent. She’s mean and if she fulfils that potential… ouch. Gotta have her within a year.”

Zohana: “Then there’s Leyla Abdul. She caught my eye with that fight against Heather. It’s not that she does one thing better than anyone. It’s a mindset. When you’ve got her going after you, it’s war. A fucking tear-up. That’s exciting.”

They have another laugh.

Parvati: “As your coach, I want Sophie now. Get her before she becomes Godzilla.”

Zohana: “Sure but she’s got the suits in Munich managing her career. I bet they know what we’re thinking. Gotta have a second option.”

Zohana: “She’s a babe. I’m a babe. Violence. Doesn’t get better than that!”

Parvati: “Let’s inquire for Sophie. If they turn us down, there’s no way Leyla or Heather will say no to a title shot against a legend.”

Parvati: “Anything to make you happy, champ!” 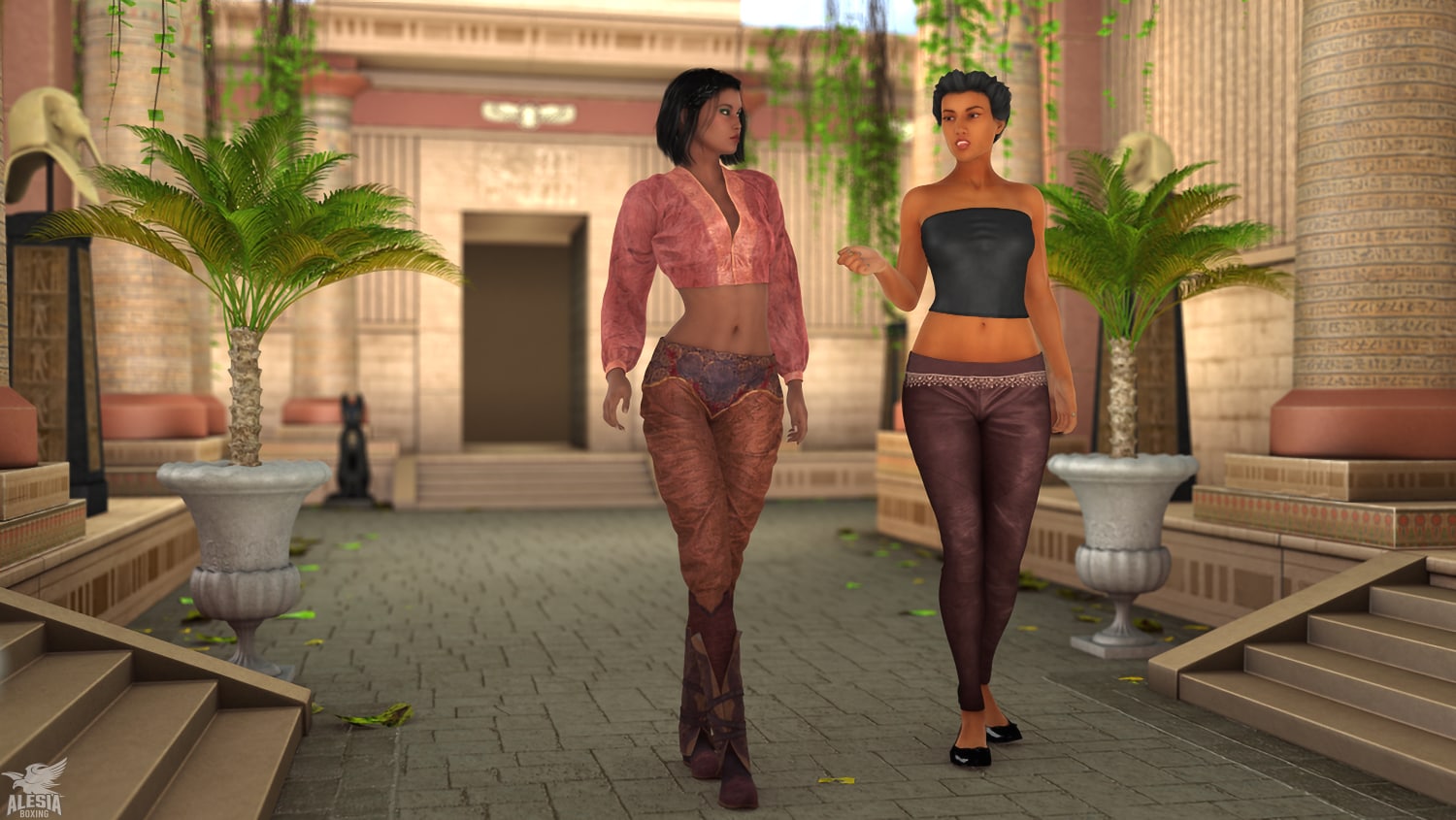 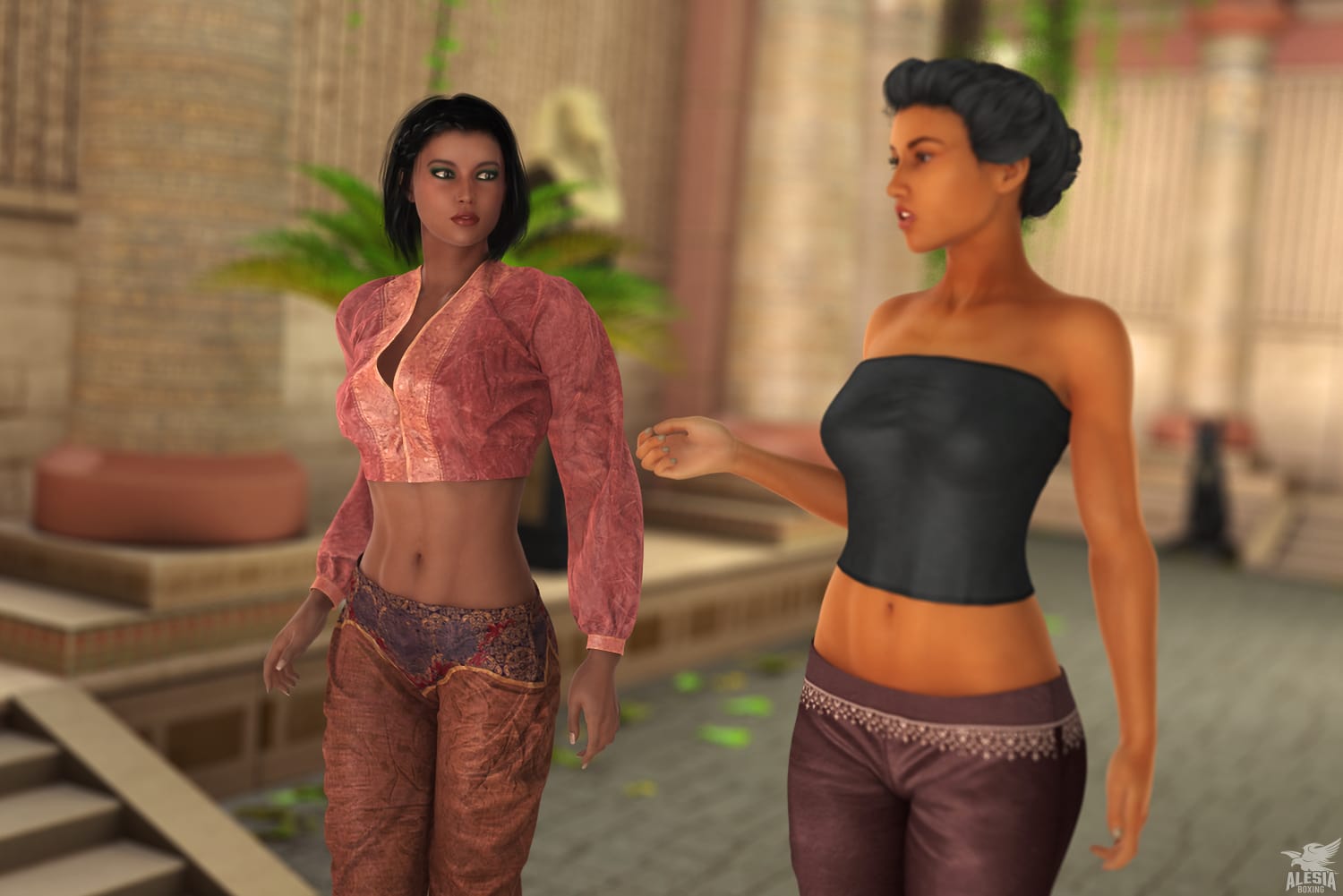 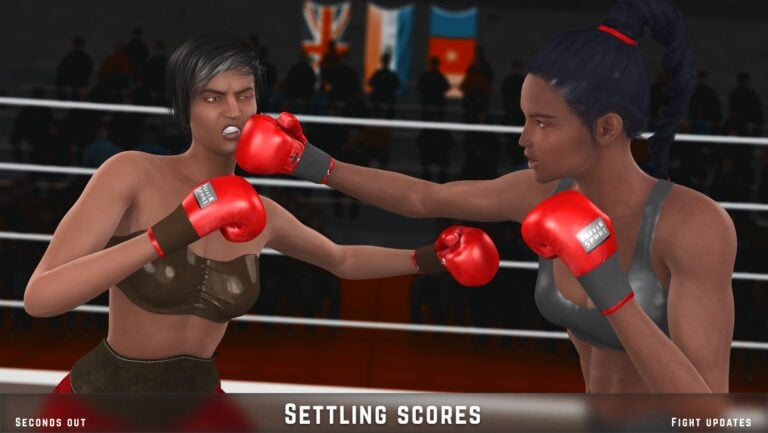 A former Super Lightweight champion of the world, former German champion and one of the pound for pound best. The Diva is known for her tactical strength and durability.
Profile

The little sister of Alesia Schumann is a born troublemaker but supremely talented puncher. A top Lightweight prospect who just entered the Top 10.
Profile

The world champion in the Lightweight division, and top pound for pound fighter. The pride of India with maddening skills.
Profile
RSS Twitter Contact
Characters and fictional brands owned by Alesia and Alex unless credited otherwise. Real-life elements used solely for artistic purposes. You are NOT authorised to make derivatives without permission. Icons credit: Font Awesome.
2022, Alesia Schumann, AlexBoxer