It’s the 7th round and although Virani is up on the scorecards, she’s been instructed to make a change in gameplan. It’s a new, uncomfortable style for the Canadian. She drops the pace of the fight, focusing not on breaking her opponent down with punching, but working behind a long jab and trying to outbox Sonia.

Laila: “As we heard between rounds, MacVicar has been instructed to switch her gameplan and box with Fox. I assume that this must be music to the ears of Sonia Fox. She got her face punched in during the last two rounds, but may get a bit of a reprieve.”

With the tempo of the fight a bit lower and Virani a bit more uncomfortable with the style of the fight, a lot of the round goes by without a significant action. Though Virani’s jab had worked during the first half of the fight, it makes less of an impact now. Sonia stays close, knowing she needs to be in close to land the punches she needs to win a round, or maybe put Virani on the canvas and put the fight back in jeopardy.

With the pace of the fight lower, Sonia feels more emboldened to take some risks.

With Virani slightly de-fanged by her new style, this pays dividends. Sonia now comes forward and dictates the fight and she is rewarded when throwing a 1-2. Virani leans back to avoid the first jab, but doesn’t get reset in time and she has no hope of avoiding the blue missile. Leather finds jaw and the sound of a solid connection fills the arena.

Laila: “Fox connects with a nice right hand! Sonia Fox has to get a ton of credit as she continues to take the fight to MacVicar. She is not going away in this fight, not by a long shot.” 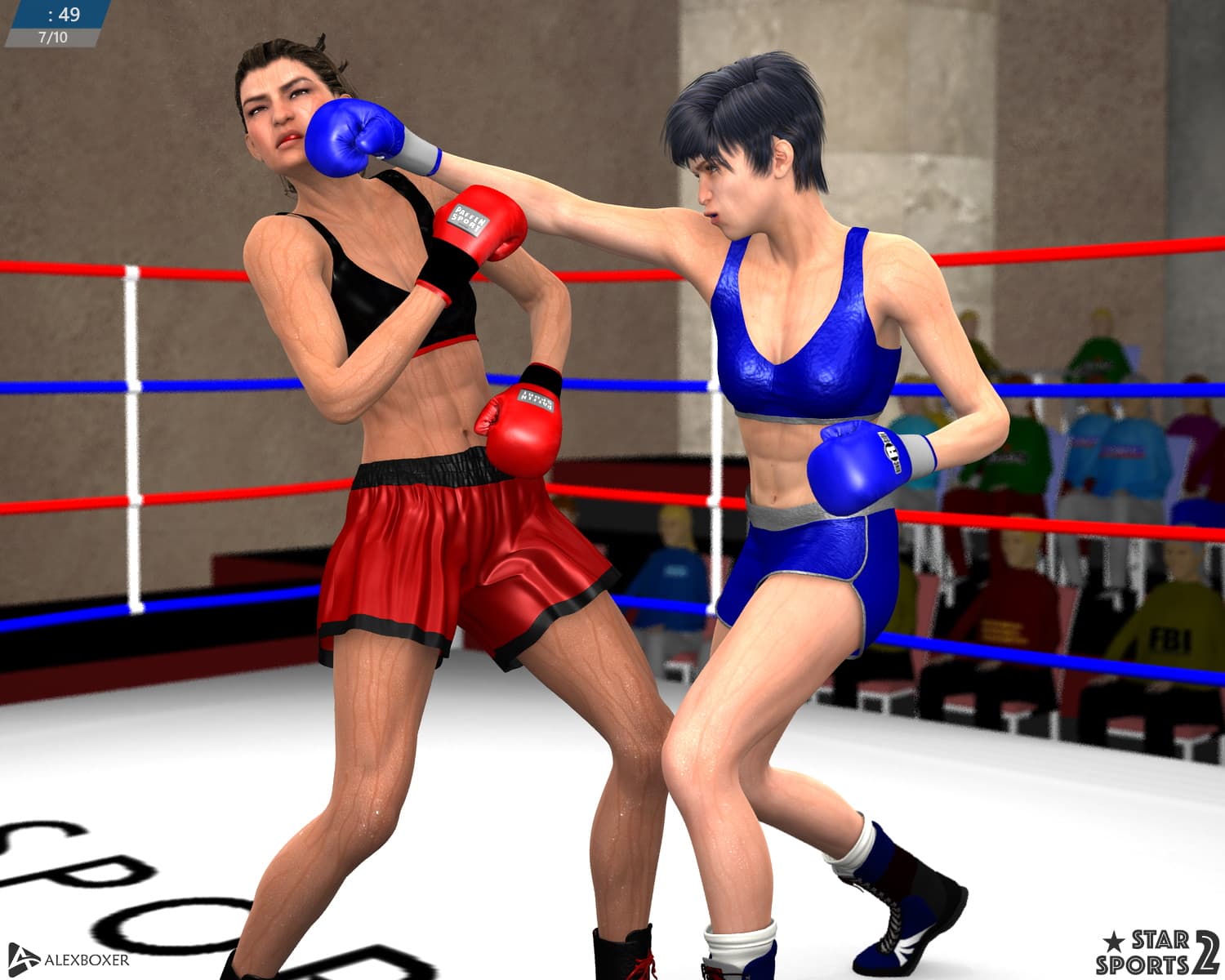 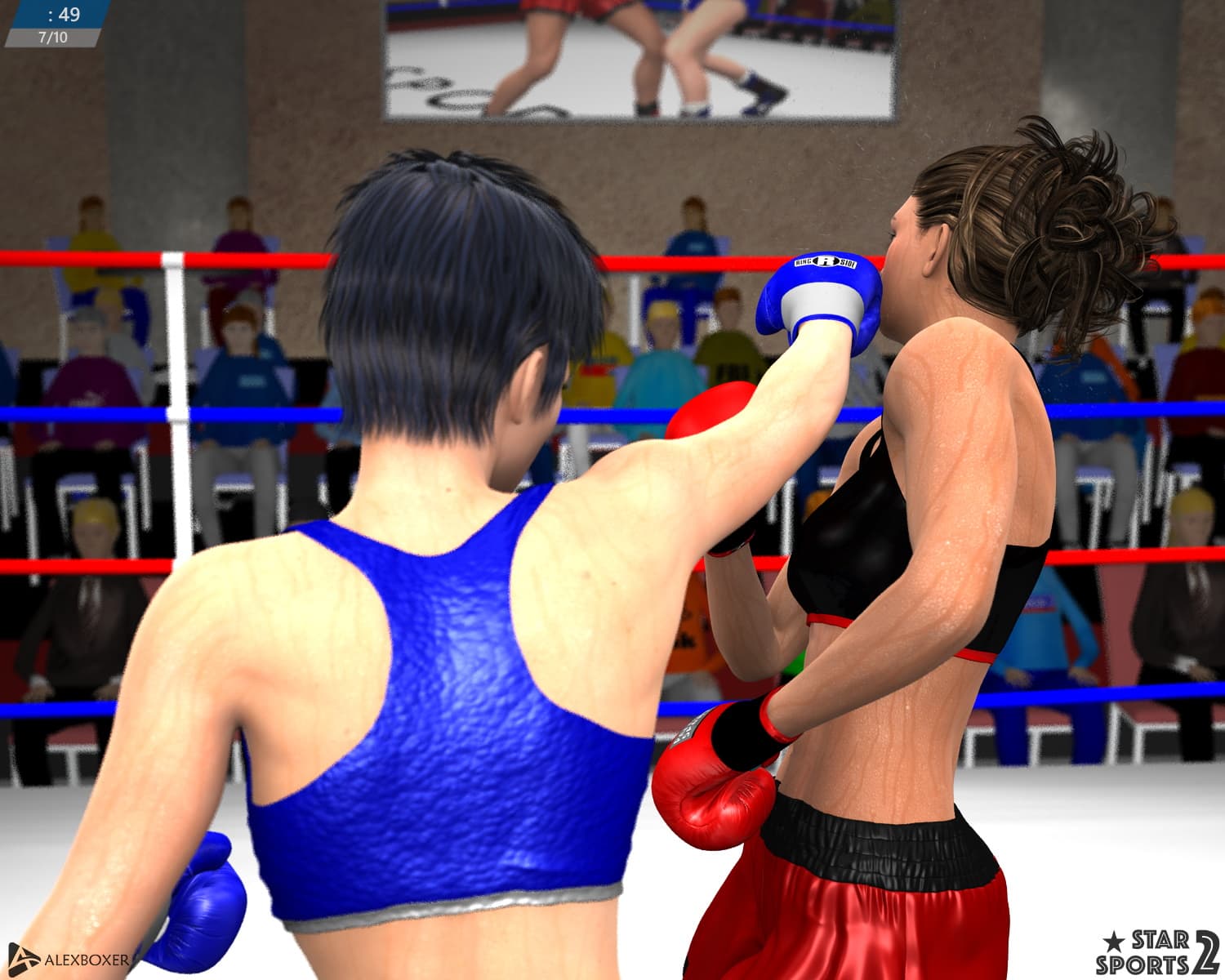 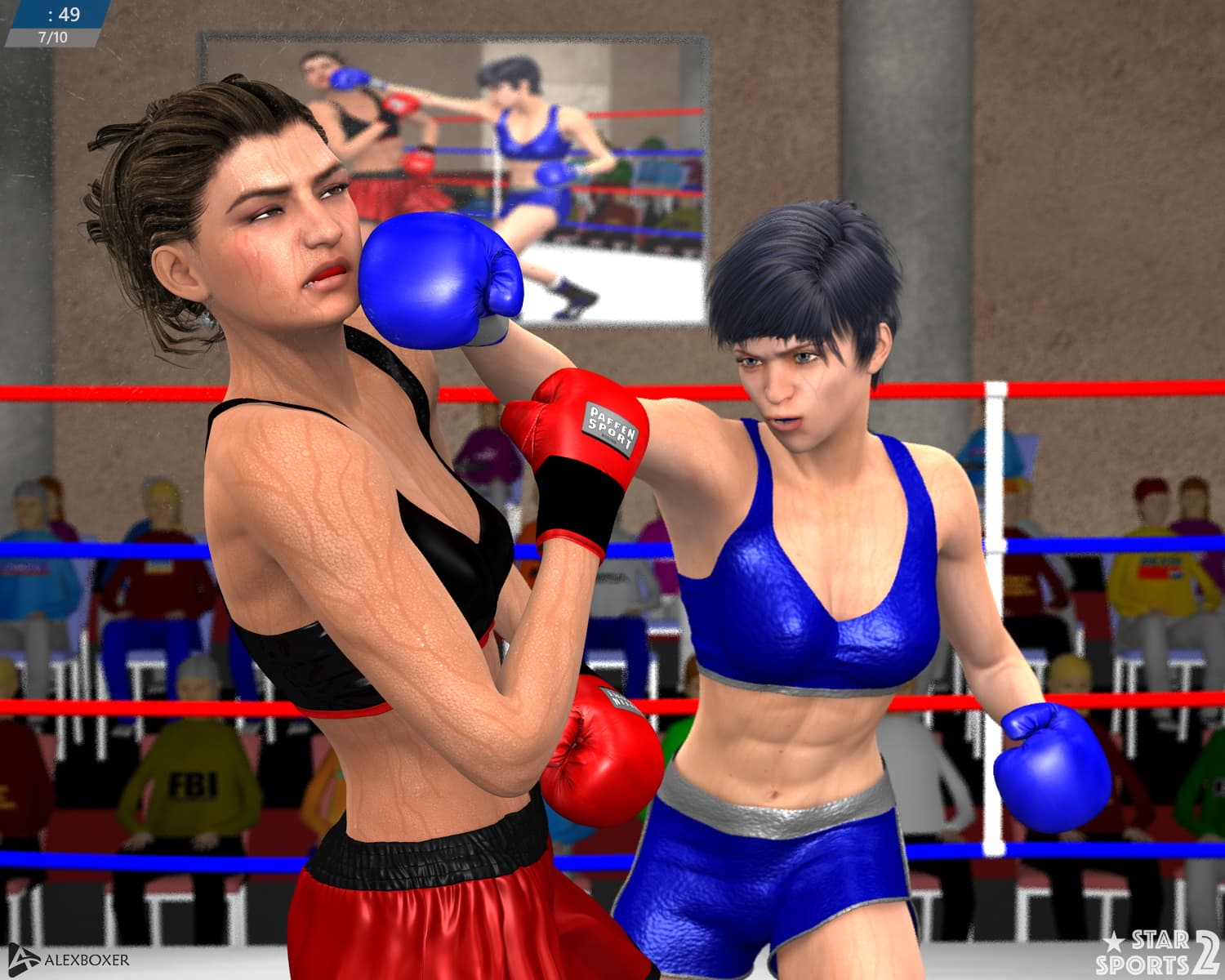 It’s clear that Virani is not comfortable with the change. She fights off the back foot and obviously does not have much faith in her ability to use this style. Nonetheless, like the headstrong woman she can be a times, she forges ahead and tries to make the best of it.

That might be inspirational in a Disney movie, but in the boxing ring with Sonia Fox – it only leads to more pain. A badly telegraphed jab gives Sonia a chance to reply with a strong left hand to the midsection that makes Virani grunt in pain.

Laila: “This round looks like it is going in the books for Sonia Fox. She might not have hurt MacVicar, but she was clearly the boxer on top in this round.”

Mechelle: “Virani’s coach wanted something different, but she won’t be too happy with this last round. Let’s see if they shift back to the usual programming.”

In the corner the message from Sandra Blohm is short and to the point. Make this work. No excuses. Not if you want to be a champion.

The former lawyer takes stock before the start of the eighth round. She’s in a tough fight with a fighter that will not give up or back down.

Virani thinks: I need to remember that I can do more than punch. I trained all these years to box. I can outbox this girl. I’m better. No matter the style.

No one gives that mental memo to Sonia Fox, who wants to physically impose herself on Virani – something that she’s had the most success with in this fight. Much like Emma McGale, Sonia finds fighting in close naturally, and tough Virani can do a lot to negate it, when they tussle in tight early in the round, Sonia leans in to give her an angle for an overhand left that lands cleanly.

Laila: “Sonia Fox is playing the bully here in the 8th round. She hasn’t been able to get in tight very often, but she’s occasionally shown the capability to do just that to Virani MacVicar.”

Mechelle: “I speak from experience when I say it is not fun to get bullied in tight. Virani needs distance.”

Virani grabs on to Sonia and forces a clinch and a break.

Virani thinks: “I am not getting bullied around this damn ring. I am going to impose myself. By being better.”

Mechelle: “I would not like to be on the other side of a gaze like that. But it really shows that the fire is in MacVicar still. She’s not going to coast to a decision.”

But Sonia Fox is the one currently with the momentum. She knows she is down in the fight and she needs to land more to really put pressure on Virani. The former Canadian Featherweight champion does not make that easy though. She fights behind a stiff jab which gives Virani an extra split second to react when Sonia flurries. The Canadian shows unexpected fluidity in these situations, making Sonia Fox miss, even in situations when she felt that she was in a good position to land.

A particularly evident example of this is when Virani ducks nicely to avoid a strong right hand from Sonia.

Laila: “MacVicar is showing some unexpected defensive nous here late in this fight. She’s making it quite hard for Sonia Fox to make a clean connection.”

Mechelle: “It is so disheartening and energy draining to throw a punch you think will land, only to have it whiff completely.” 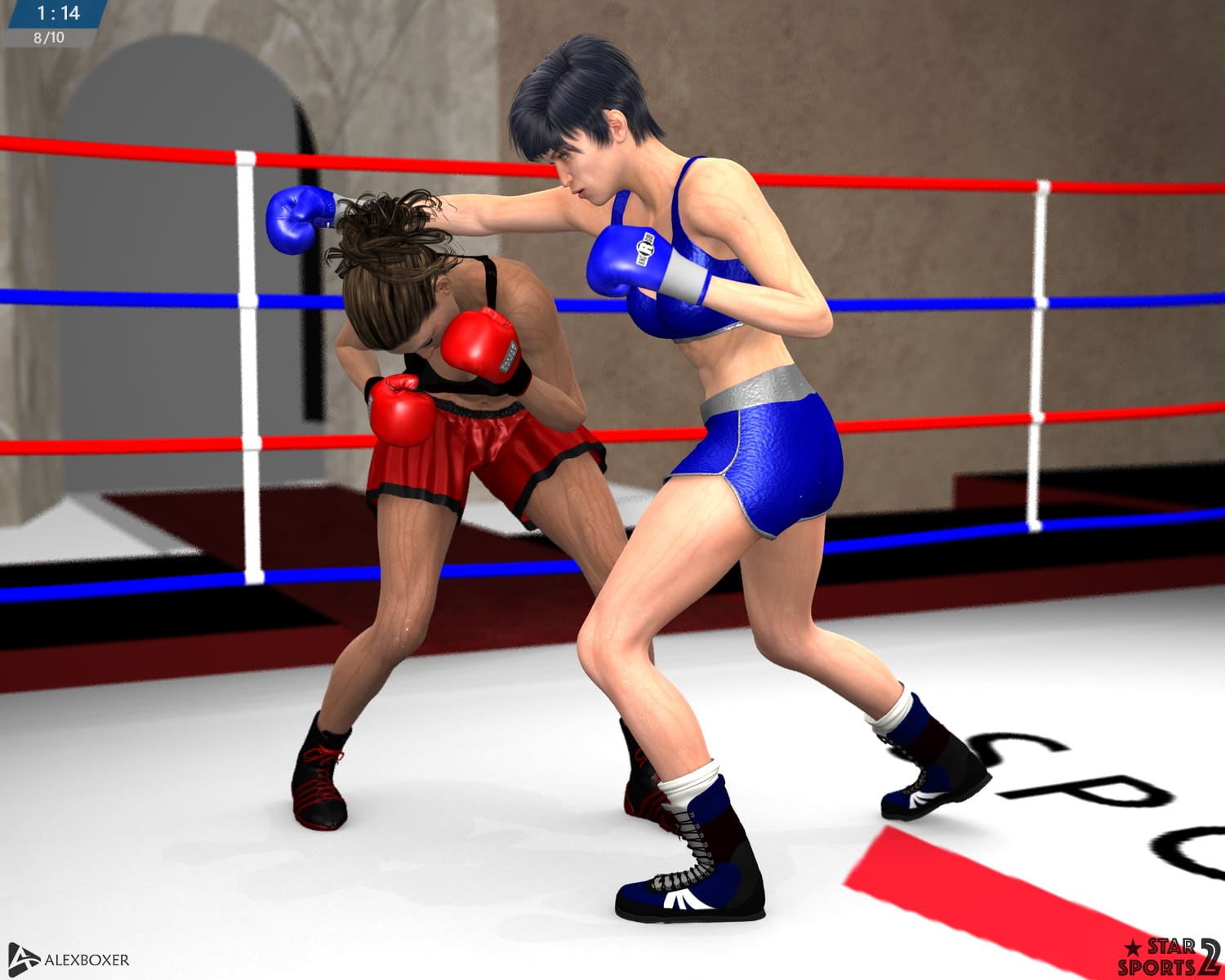 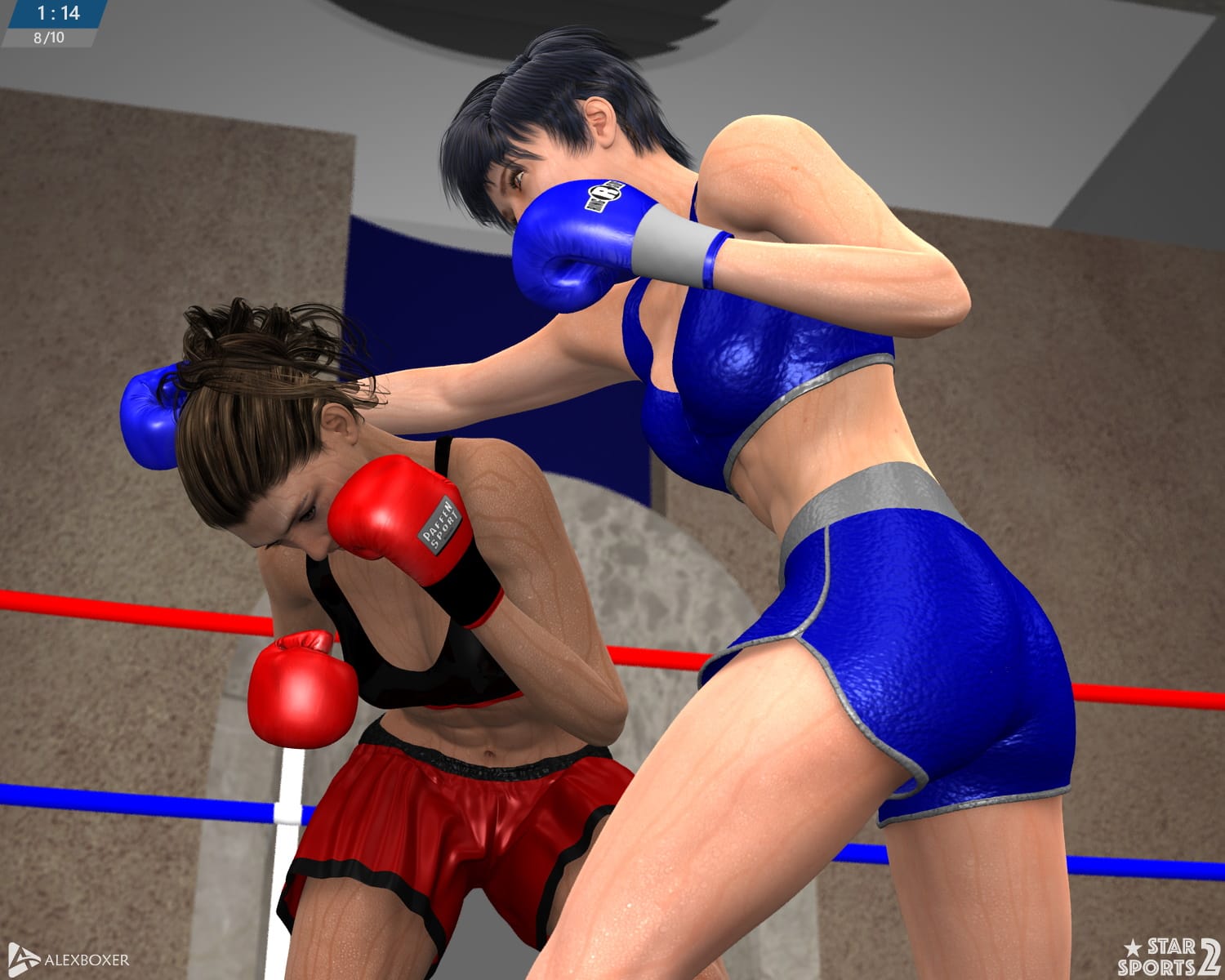 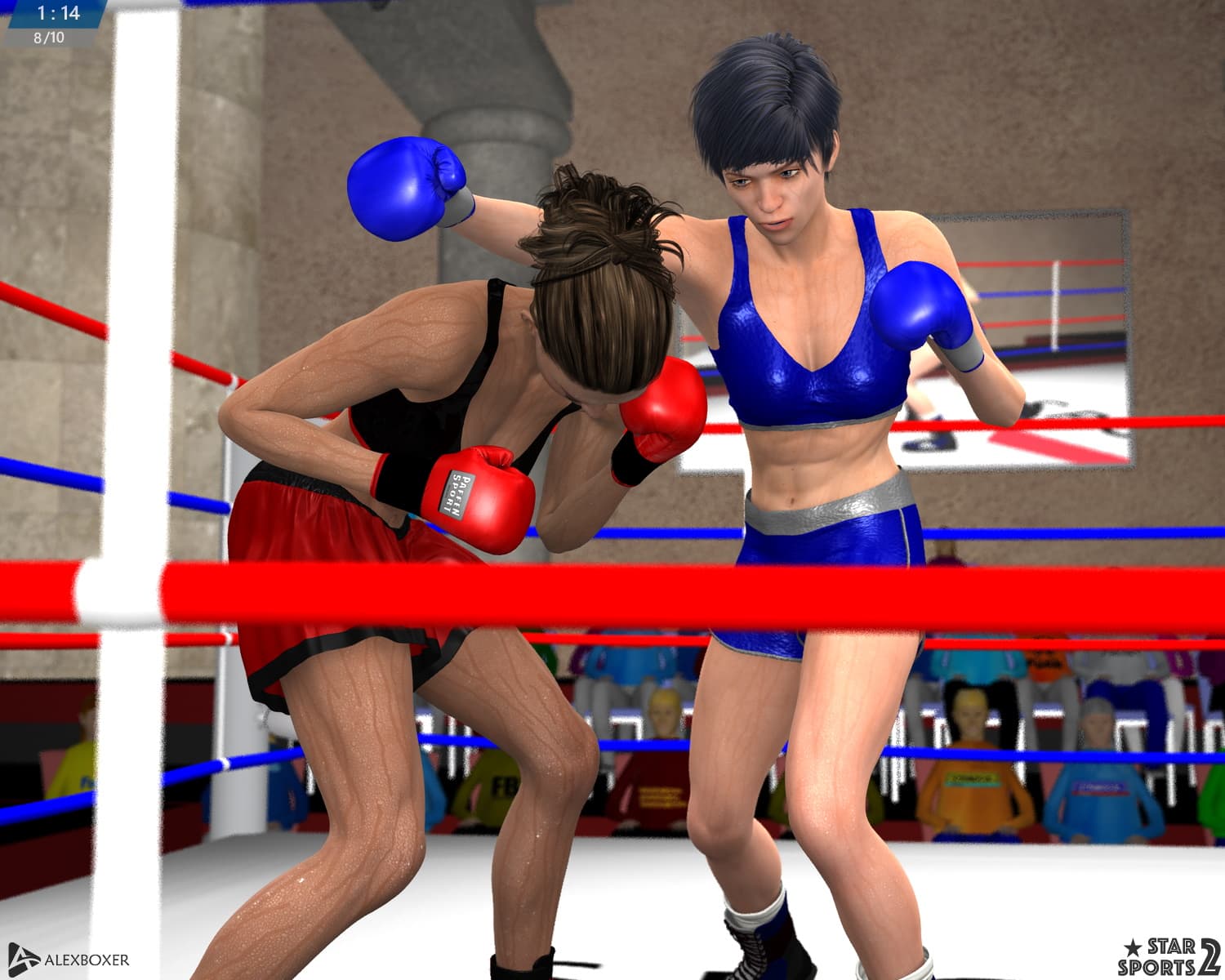 Virani fights a bit taller than her usual stance, trading a bit of power of being largely flatfooted for a more fluid approach. Virani finds that she moves a little bit easier and with the advantage in speed and footwork, it opens up some opportunities for her to punch from good angles. While Virani’s punch output has dropped, when she does land, she can still strike very hard.

Laila: “Virani is boxing much better here in the 8th round. What’s been the difference, Mechelle?”

Mechelle: “She’s lighter on her feet. When you are a puncher, you can kind of just plod forward. But when you are boxing at range, you want to be light on your toes, shifting angles and being able to react quickly. She’s also throwing a jab with real snap and intent to it. It’s setting up everything.”

The 8th round ends, which means the fighters retreat to their corners for further instruction.

Cameron: “How are you feeling, kid.”

Cameron: “It isn’t going to get easier. You’re down pretty big. You’ve got to come forward and go for the knockout. That’s all there is to it.”

Sonia: “She’s too fast. And she’s not giving me the same chances to punch.”

Cameron: “You have to force her to make mistakes. You have to pressure, and hope she cracks.”

Sandra: “So you can teach an old dog new tricks. Good to see.”

Virani: “Wasn’t exactly easy. Is she slowing down at all?”

Sandra: “Yep. Don’t take risks. Use your jab. Don’t let her get inside. Stick and move and then come over the top with a right hand. She’s plodding and she has to follow you around. Make her pay. But for the love of god, don’t get hit by some haymaker. She’s going to swing for the fences.”

Virani: “I watch enough drama on TV. I don’t need it in my fights.”

Mechelle: “Though this has been somewhat closer than expected, and most probably would not have predicted a fight even reaching the end of the 8th. I have MacVicar up 6 rounds to 2, so Fox will need to get Virani on the canvas in order to have any chance to win this fight. Though Virani is not the most iron-chinned fighter, it does seem like a difficult task for Fox.”

“Most surprising has been the shift in gameplan from MacVicar. She’s showing some versatility and evolution to her game, though it hasn’t always been smooth sailing.” 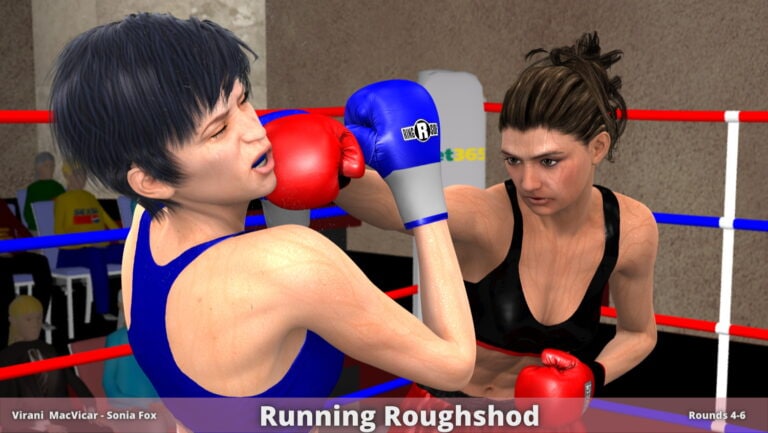 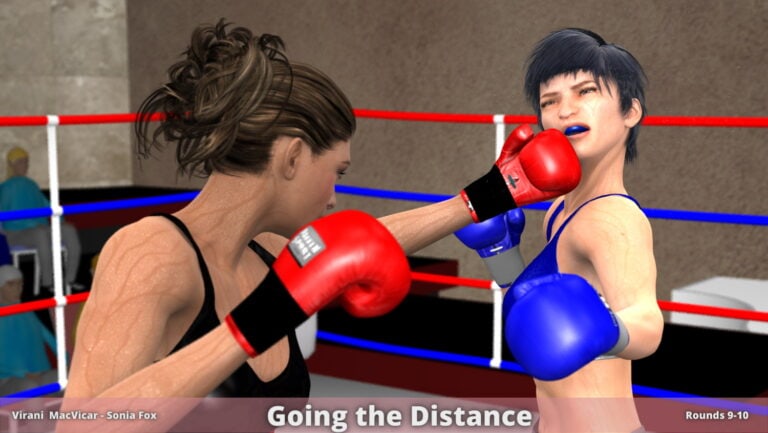