We’re at the Sporthalle in Hamburg after the rituals that precede a boxing match. Action gets underway for the German Super Lightweight championship between Alesia Schumann and Melanie Spitzer.

The Diva’s fans get going. Three bangs on drums followed by the A-LE-SIA shout. Rinse and repeat. Melanie has the belt but the challenger has most of the crowd.

It’s a cautious first round, especially from Alesia. The former title holder lets the defending champion come at her, working the defense and taking her time to review the opponent’s habits. That’s what most students of the boxing game like to do in an opening round.

Esther: “One gets the sense that Spitzer will soon grow frustrated after missing on so many punches.”

Anna: “The big puncher is piling on the pressure but it’s not effective so far. Ring generalship favours the Bavarian, who made it a point to wear the same colours than the national team in football.”

Leonie: “Interesting. How is it that Ally has the army’s logo on her top now? Wasn’t that Akane’s sponsorship?”

Sophie: “They still have Akane as spokesperson but offered a sporting deal to Ally to remain visible.”

The Diva does more of the same early in Round 2. Practicing the sweet science which puts “not getting hit” on top of the priority list.

However, the girl in black and white starts to let her hands go as time passes. Letting the woman from Magdeburg attack before unloading counters when the openings come.

Esther: “Schumann scores with a sharp uppercut under an incoming left hook and the crowd is loving it! Spitzer required black gloves in the fight contract and she’s getting a taste of them.”

Anna: “Timing beats everything in this sport and this punch is a great example of it. Waiting, letting your opponent commit and striking when they can feel it the most.”

The TV analysts’ earlier prediction materialises in the third round. Melanie dropped the points by getting outboxed in the first two and she’s irritated. Her natural reaction is to turn more violent with more penetrating punches.

This leaves the Münchener no choice but to protect herself at all times. Slipping punches and getting out, and throwing only when necessary. Which is not easy under this type of heavy fire.

Esther: “Schumann twists, turns and avoids dangerous shots. The champion is attacking but punches are like water off a duck’s back.”

Anna: “Quack. This will give Melanie points for Round 3 but you get the sense that she’s getting out-thought by Alesia.”

One of the things that boxers dread happens in Round 4. Full of confidence and working with great timing, Alesia starts toying with Melanie. She doesn’t just avoid punches anymore, but gets in, gets out, gives the occasional shove and basically does whatever she wants to a boxer who’s been knocking chicks out left and right.

The Diva treats herself to a long left hand on the tip of the chin as a direct counterattack against an incoming right hook.

Esther: “It’s rather rare that Alesia Schumann gives us one-sided action but she is completely in the zone tonight and the fans are lapping it up.”

Anna: “I can tell you that the German championship matters to her. It’s a question of national pride.”

The end of Round 4 is a little embarrassing to the girl who calls herself Hand Grenades. The weapons turn into windmills as she takes wild, dangerous swings. They’re fast but Ally finds ways to avoid major damage. She can even adjust when throwing a shot to the body, changing her movement while in motion to avoid decapitation.

At the break between Rounds 4 and 5, Regina asks for more serious business. It’s the signal that there’s been enough goofing around. She wants the addition of power to the mix.

Alesia takes her time once again, but she delivers on the order. Nearly halfway into the round, she stands in the pocket with the girl in white, pink and black. Waiting for a chance to step in with a big counterattack.

It’s a riskier venture that pays off in style. Melanie throws an evil-intentioned straight left, making Alesia lean to the right while delivering a vicious right to the ribs.

Esther: “Spitzer’s hurt! It’s a rare sight but the German champion is unable to hide that the body shot she took has given her enough pain to make the legs wobble.”

Anna: “Many people will describe Alesia as technical and durable with a massive uppercut. What differentiates her from others is her sixth sense for the right time to finish and she’s going for it!”

Esther: “Chasing the injured animal for a chance to put her down now.”

The former world champion hits gold. A destabilised Melanie tries to defend herself but throwing a punch while staggered exposes you to taking the clean hit your chin can’t absorb. A right hook from outside is quickly met by an overhand left that lands just under the jaw. PAFF!

The crowd cheers. It wants a KO. 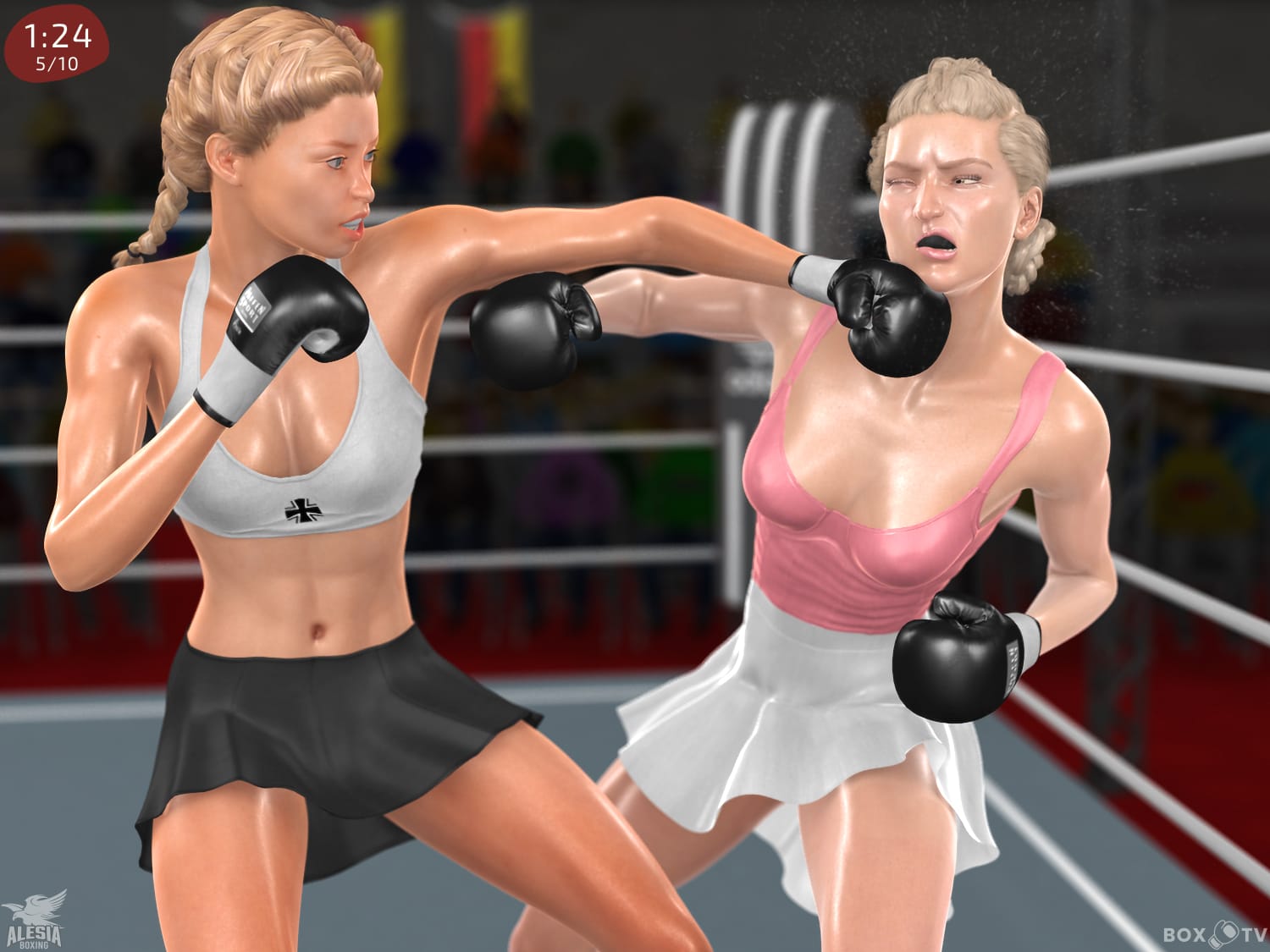 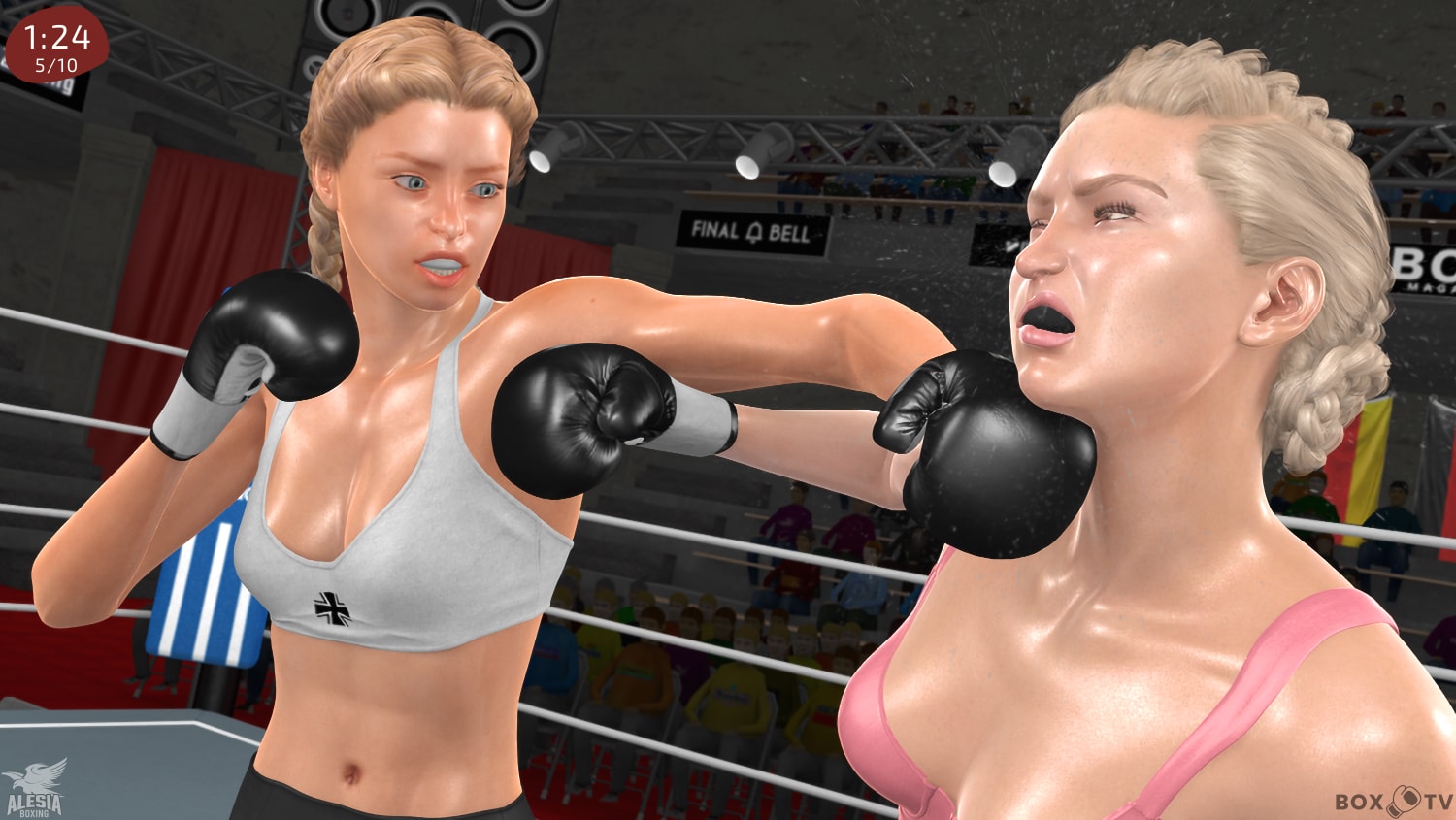 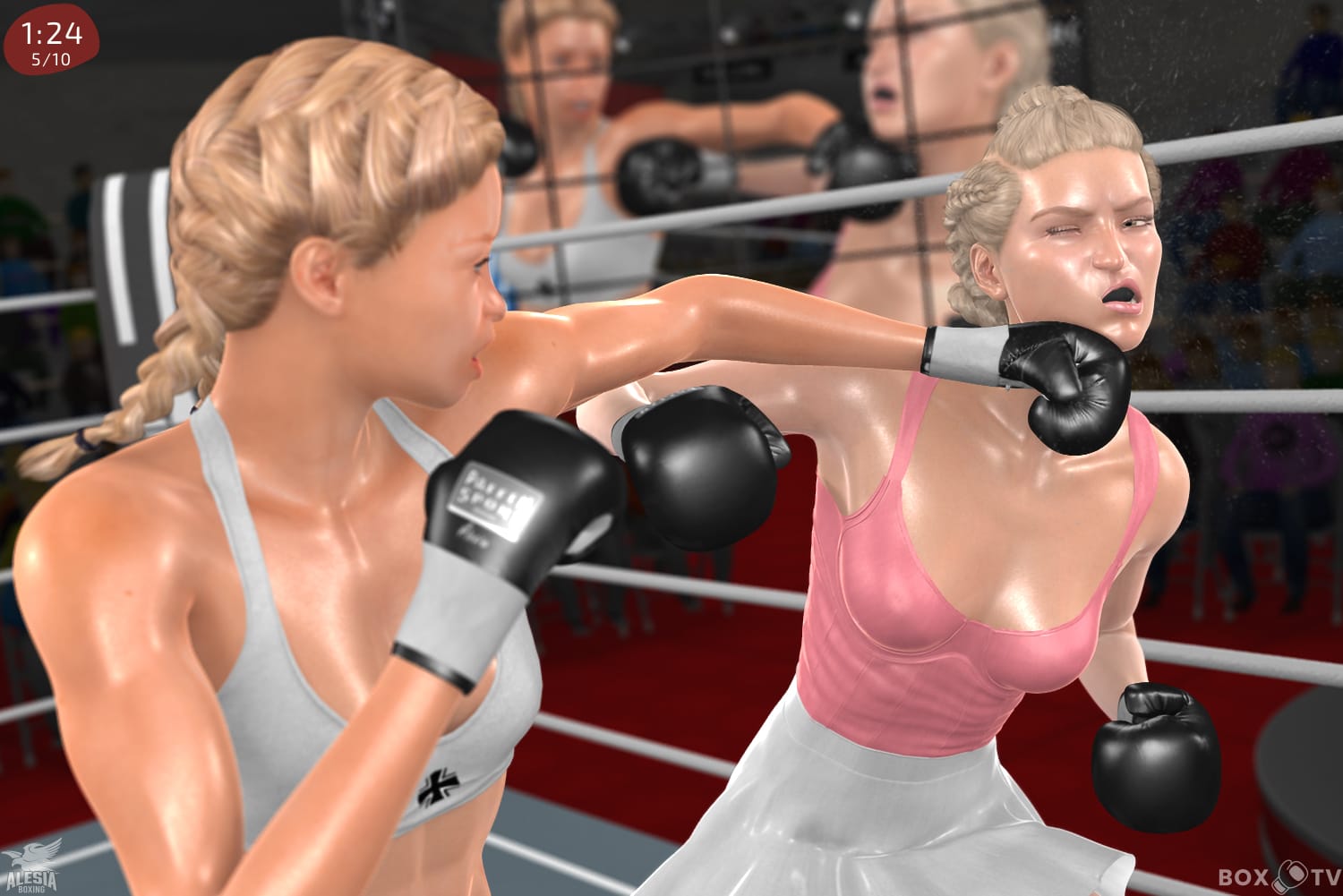 That knockout comes within seconds. Melanie falls to her left and meets the canvas. The cheers get wild.

Esther: “The champion is on the mat! How much does she have left in the tank?”

The answer: not much.

Akane shoos Alesia to a neutral corner and starts a count.

The downed champ is barely moving.

The Box TV crew have to change the volume mix to make sure that their analysts get heard under deafening noise.

Esther: “Schumann scores a knockout to become a two-time German champion! A dominant performance from a Diva returning to the ring after a bitter defeat at the hands of Steffi Slater.” 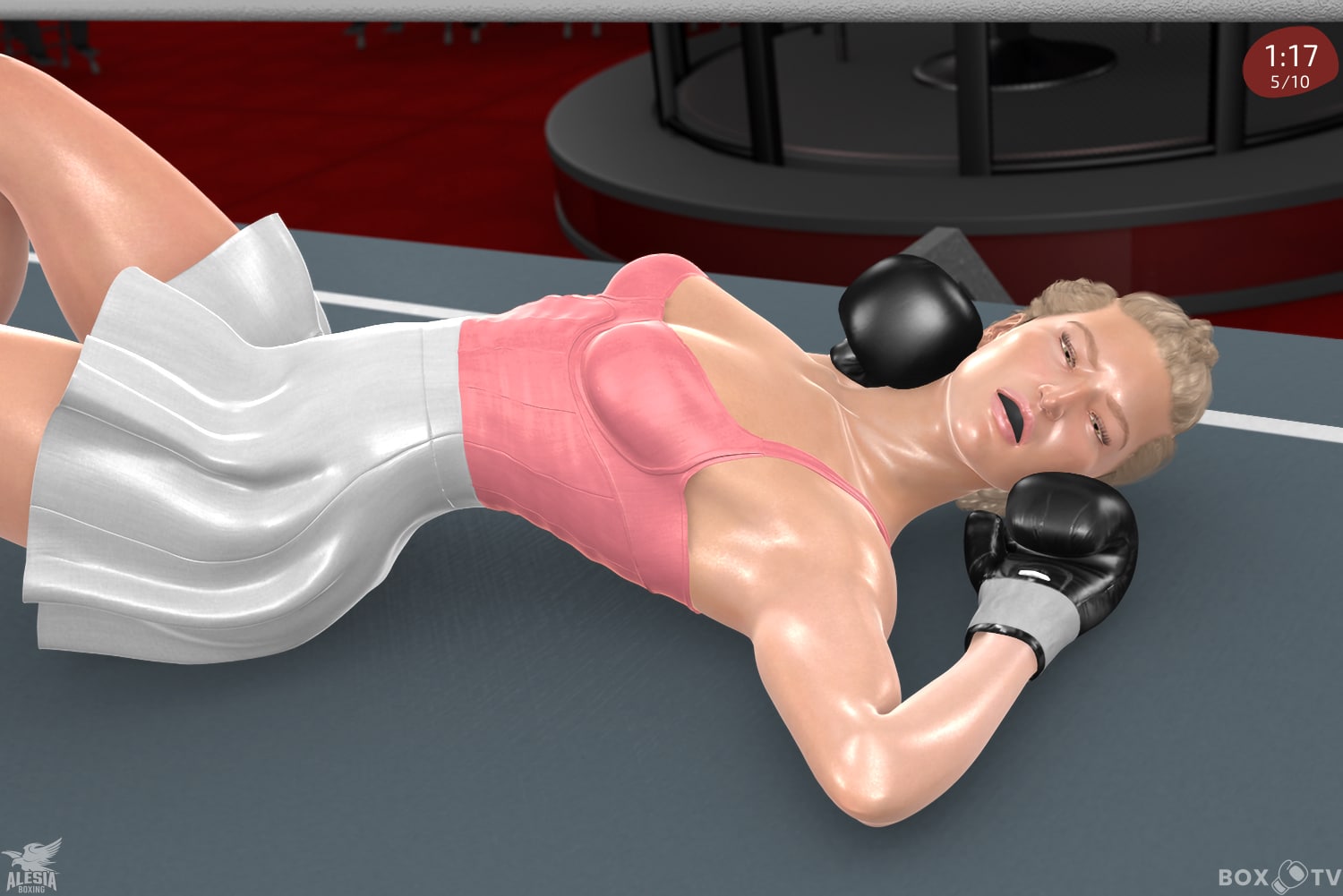 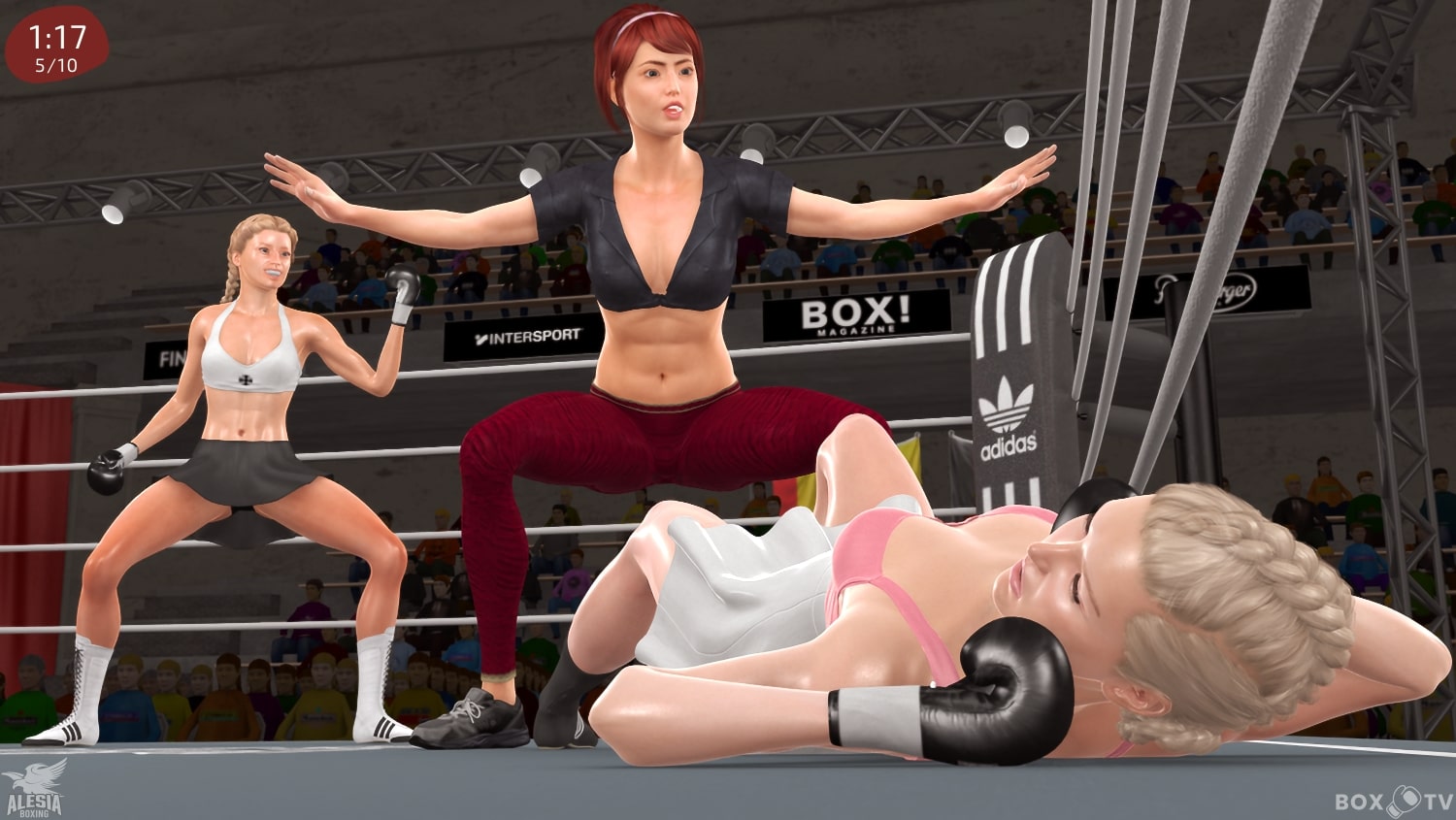 Veronica: “Ladies and gentlemen… a round of applause for your winner, by knockout at 1:17 in Round 5 and TWO-TIME German Super Lightweight champion… Alesia ‘The Diva’ Schuuuuuuumannnnnnnn!”

The reinstated queen of German boxing gets a standing ovation. Even Akane allows herself to applaud the winner.

A couple of minutes later, Esther has her lined up for a post-match interview.

Esther: “Alesia, congratulations on regaining the German title. What does it mean to you?”

Alesia: “Thanks. I’m happy. I find the German championship important. I wanted to have it back, and it’s even more satisfying to have done it in a convincing way.”

Esther: “Convincing would be the word. Are you surprised that it went this well against a heavy hitter?”

Alesia: “I’d be arrogant if I said that I expected anything easy. I respected Melanie’s ability to deliver a punch and I wanted a strong comeback after losing the world title. I trained super hard and I was ready.”

Esther: “That doesn’t tell me what you think made the difference here.”

Alesia: “Timing beats everything in boxing. Melanie hits hard, yes, but I got the better timing. Anything else?”

Alesia: “I want two more fights this year. Final Bell are working on making Steffi Slater defend against Sky Houghton. I want the winner of that. With or without the world title belt, I also fancy a match with Chelsea Carter. Time to make it happen after all these years.” 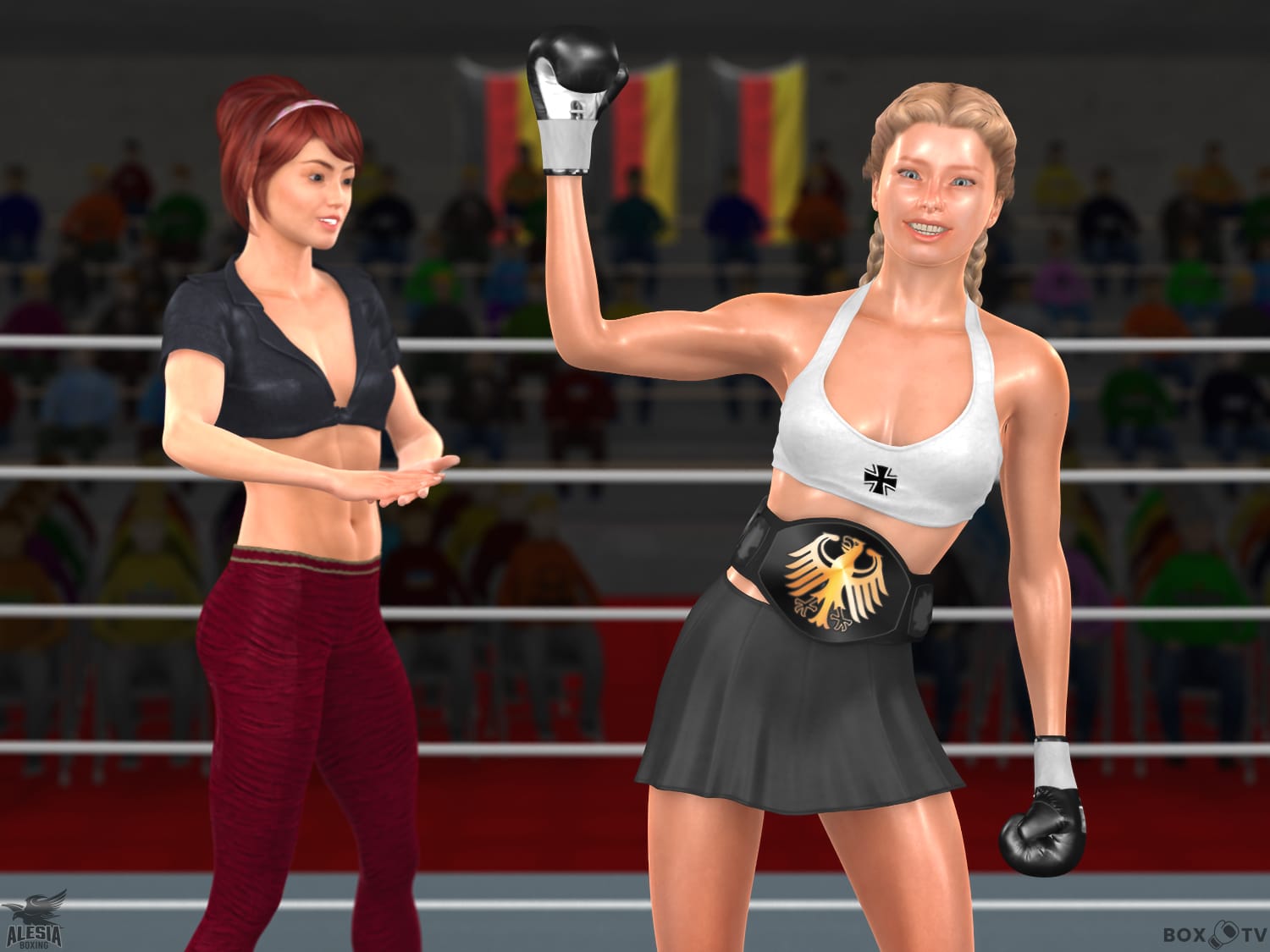 Esther: “Thank you Alesia. That’s it for tonight’s show. A two-time German champion is now bidding to regain the world title. So long from the Sporthalle in Hamburg.”

REtweeted by Chelsea Carter
BOX!
@boxmagazine
What a dominant performance from Alesia Schumann. Certainly her best since the destruction of Stella Haussmann in 2019.

Crunching punchers so convincingly is a gift from the gods that we can barely explain although we admire it.
New York
Twitter for Mac
74 replies 1K retweets
REtweeted by Sophie Schumann
Chelsea Carter
@chelseacarter
Alesia stopping chicks is more like it 😍 That was a classic display of her skills.

Nice to hear that we are getting close to our match. The thrill of the battle, baby!
San Francisco
Twitter for iPhone
33 replies 267 retweets
Retweeted by Sophie Schumann
Zohana Patel
@zohanapatel
I knew that Alesia would come back strongly. This isn’t someone who stays down for long and she’s still very much in her prime years.

Oh and the way she dismantled Melanie? Punching hard and being tough isn’t enough in pugilism. Gotta be smart.
Bombay
Twitter for iPhone
15 replies 812 retweets 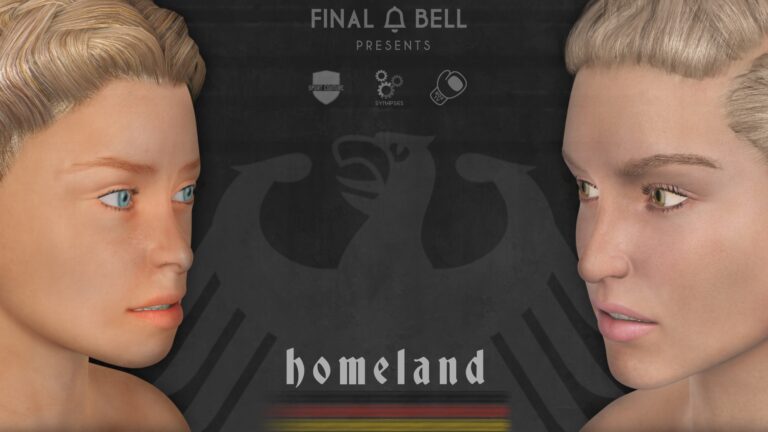