Esther: “We’re off at KOs in Koblenz with Delara Salimi taking on Sarita Waris. A ranked contender against a talented youngster with much to prove.”

The Finnish pugilist, made somewhat credible when she knocked Julie Marks out, wants another scalp. It shows with a start on the front foot to the first ten-rounder of her career. Manual fireworks that the British-Iranian thought would only show up later.

The blonde goes for jabs with her right hand and quick feet shuffles and switch hitting to serve jabs with the left. Delara fires back with quick hands but finds herself thwarted and frustrated by the confident Scandinavian, who lands more often.

Top Draw is a troublemaker in many ways. Her haters don’t like the attitude, meaning that they must hate the versatility of her left hand even more. Couple that with quick footwork and you may also witness a right hand that does damage.

That damage comes in Round 2. Sarita fights on the back foot, falls back and baits Delara to attack. She steps back to avoid the incoming leather before sending in straight rights that make contact.

Esther: “Waris is off to a solid start against a number six contender in her division. We don’t know if this will be short-lived or conclusive but it’s looking good for the youngster. What do you make of it?”

Anna: “I say that the arrogant little thing has great timing. Having been the only one who knocked Julie Marks out has to feed the gigantic ego of a young woman who also happens to be a very talented boxer.” 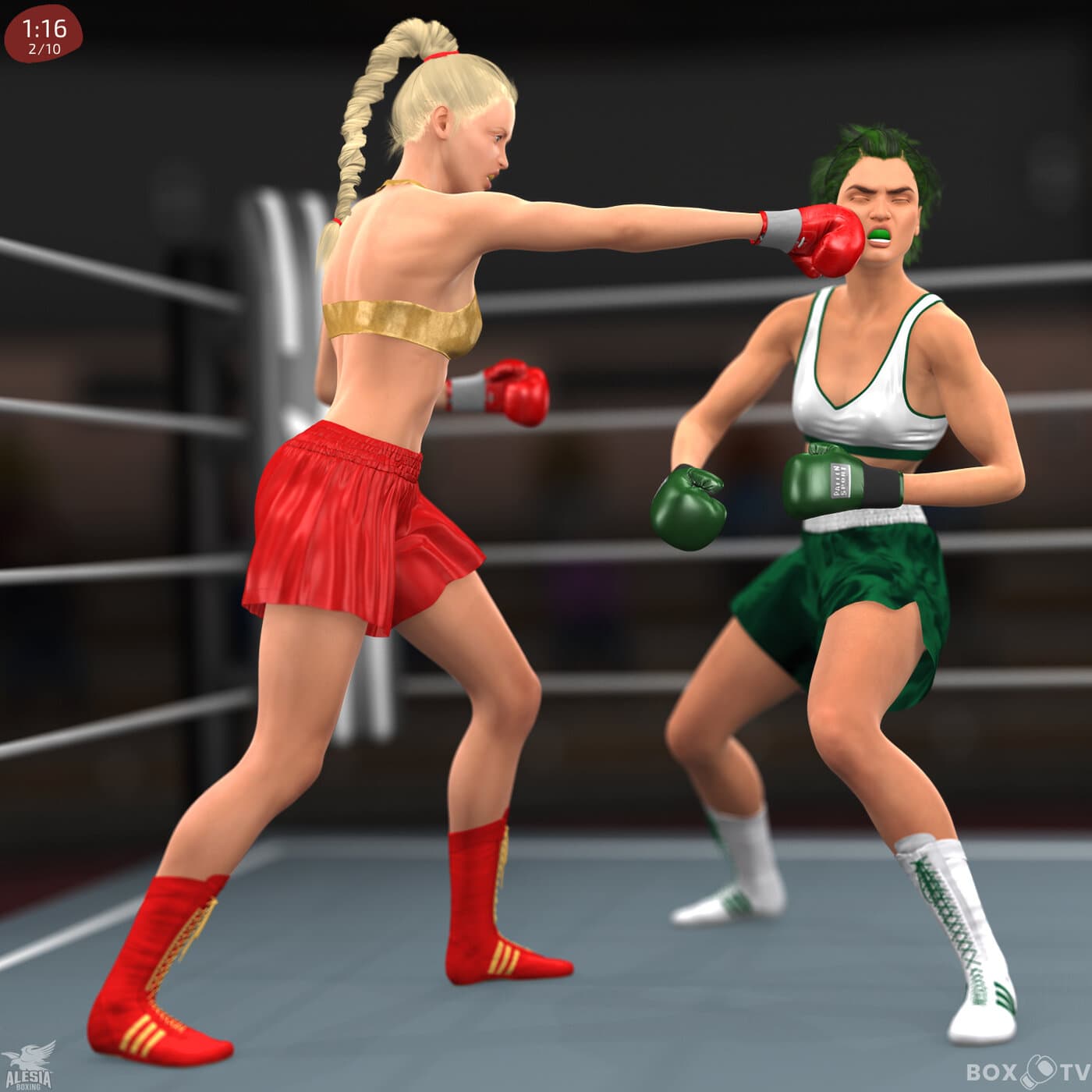 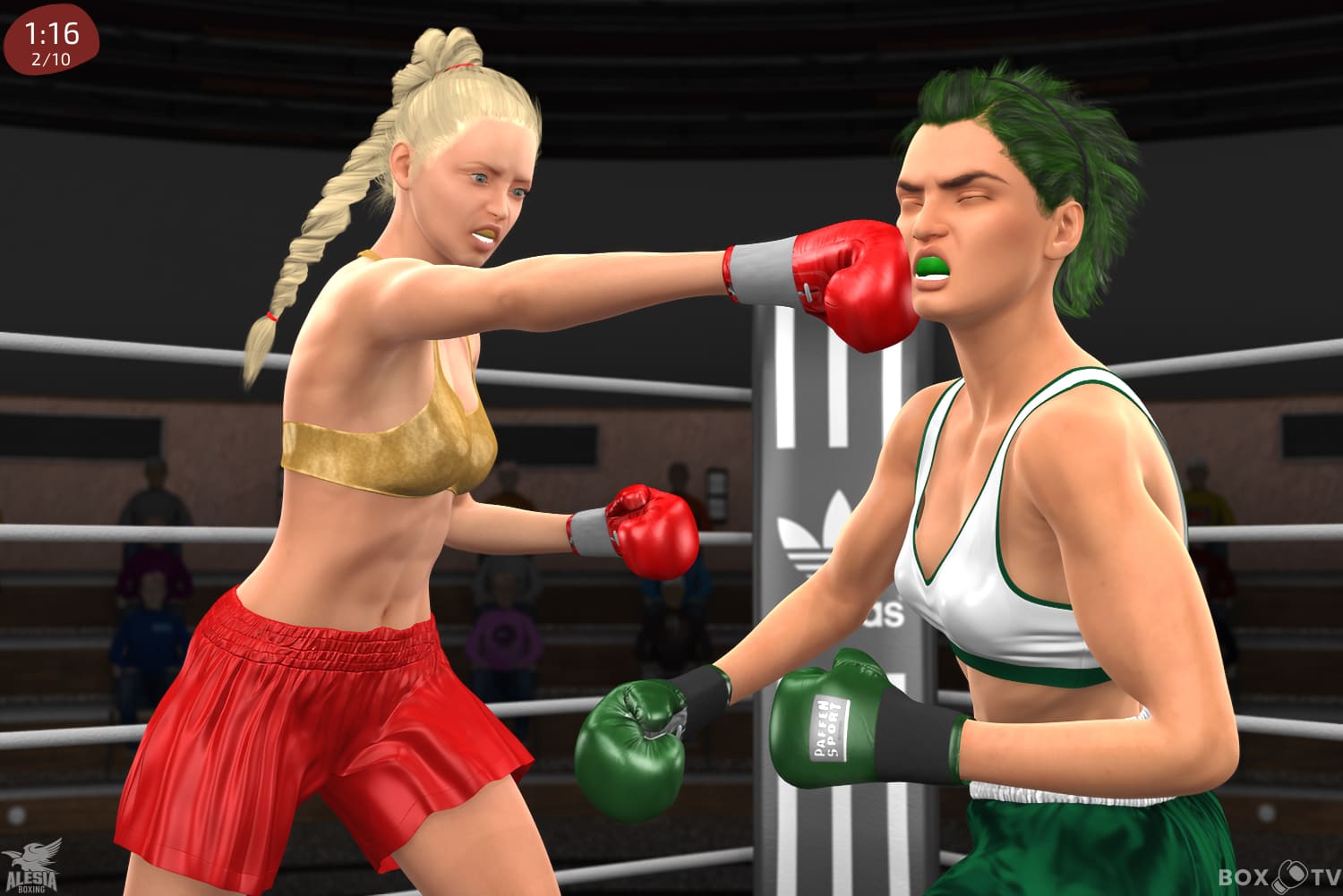 The bad girl dares to be creative in the third round. Letting the contender “walk” her around the ring but looking to land the cleanest hits in return.

Boy, does she do that in the final part of the round. Sarita leans to the right and lets the green-haired woman throw a left at her before releasing a sneaky left from below, with a motion to harvest the chin and jaw. Pish!

The party doesn’t last forever. Delara Salimi didn’t climb to her position in the rankings by being a pushover. Egged on by coach Virginie Rossignol, the favourite blitzes through Round 4.

The feisty Finn resists as long as she can but she eventually folds due to the strain caused by a barrage of green leather. Looking to avoid a right hook, Sarita gets caught at the wrong time. Delara resets to instead throw a short right uppercut to crunch the chin. PAFF.

Esther: “What an uppercut. Salimi rediscovers her attacking skills in this round and she does it in style. One of the most celebrated punches in boxing, the right uppercut, is squarely on target.” 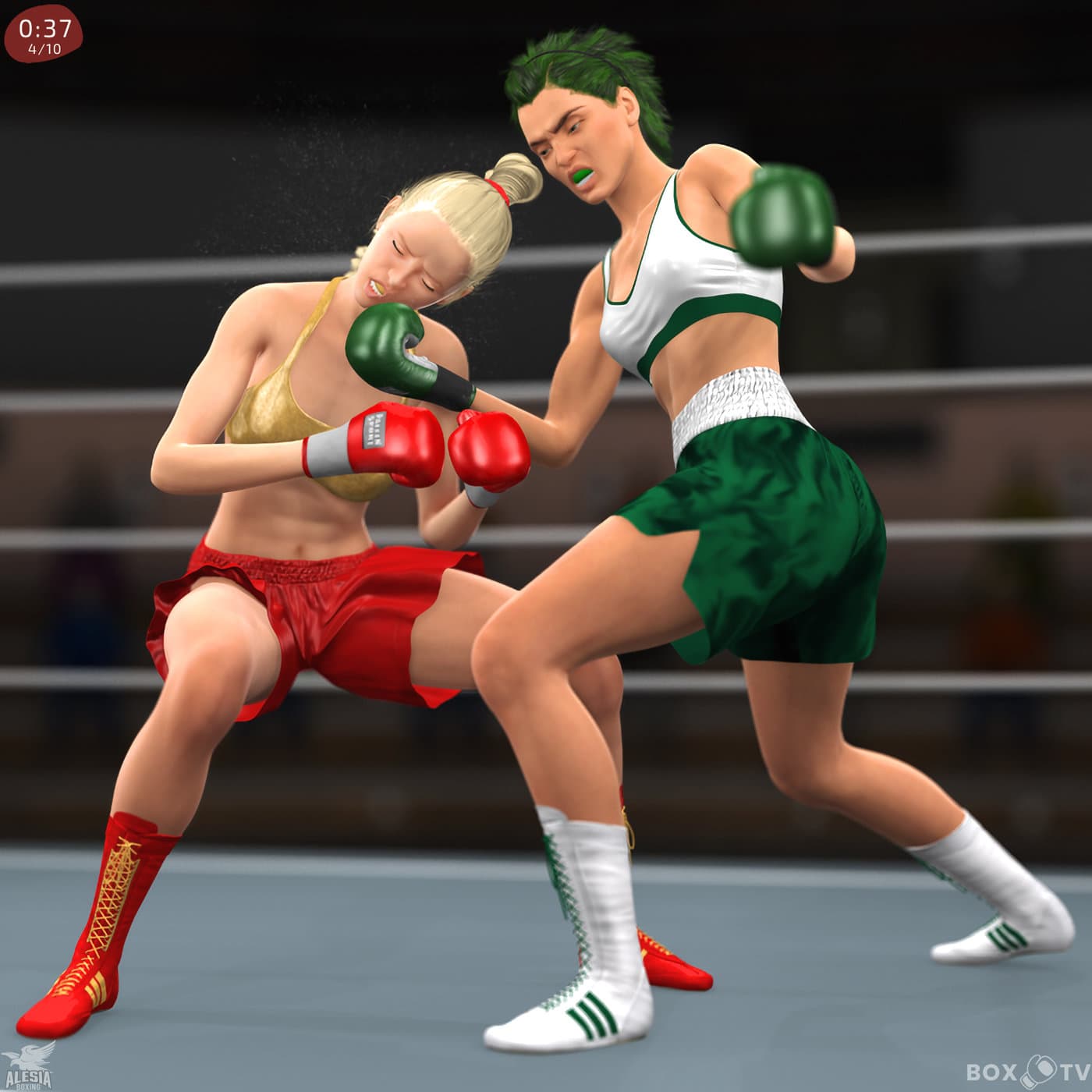 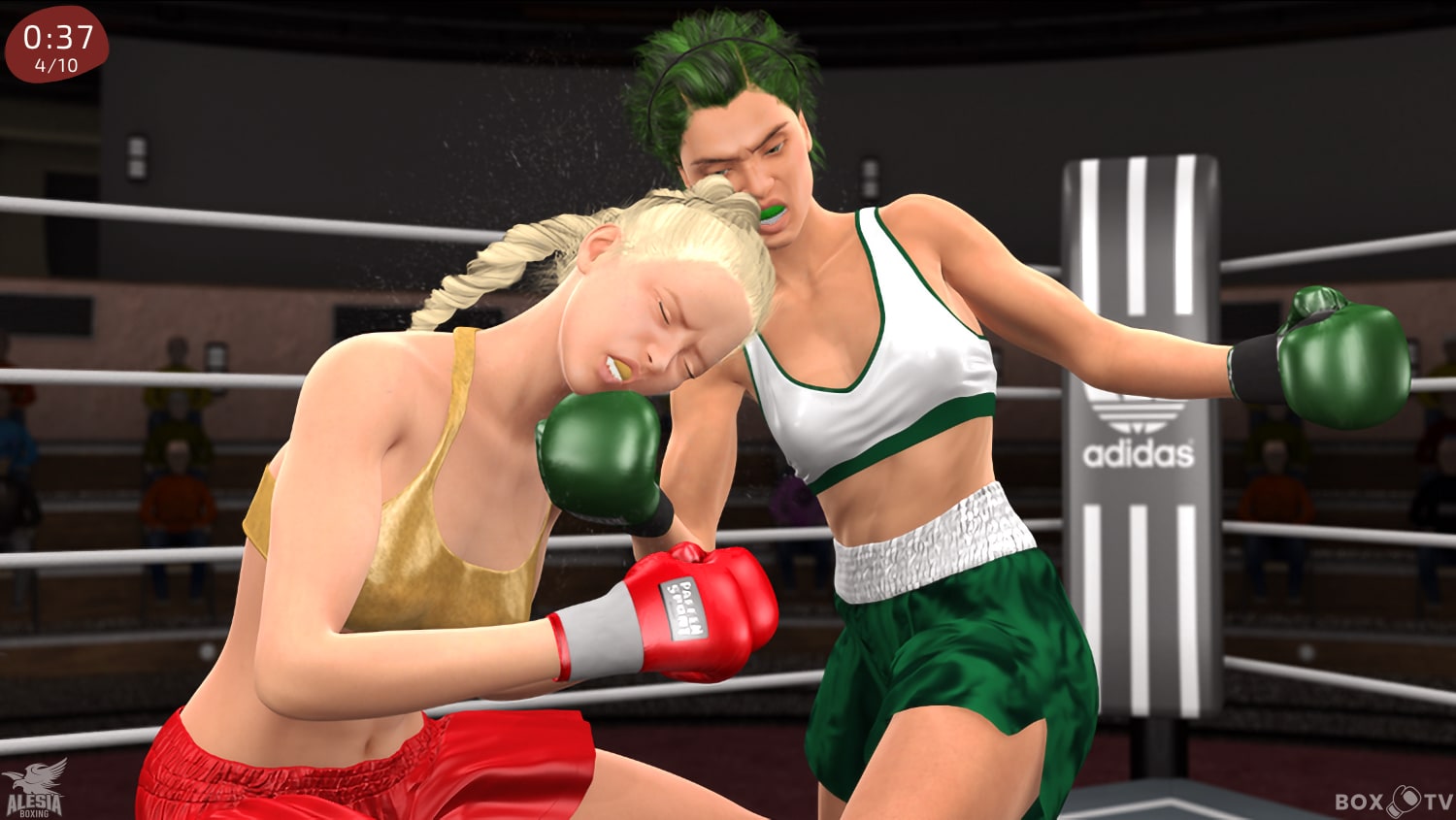 Esther: “Waris goes down! Looking hurt after being bitten by a scorpion disguised as a boxing glove and she’s looking hurt right now. Does she have it in her to climb back on her feet?”

The crowd’s reaction is mixed. Many people who don’t like the Finnish woman or like the British-Iranian are cheering. Those with pure bloodlust in the primal sport of boxing are cheering as well, independently of who’s dishing out the brutality. Some of the audience is gasping because Sarita was putting on a good show. 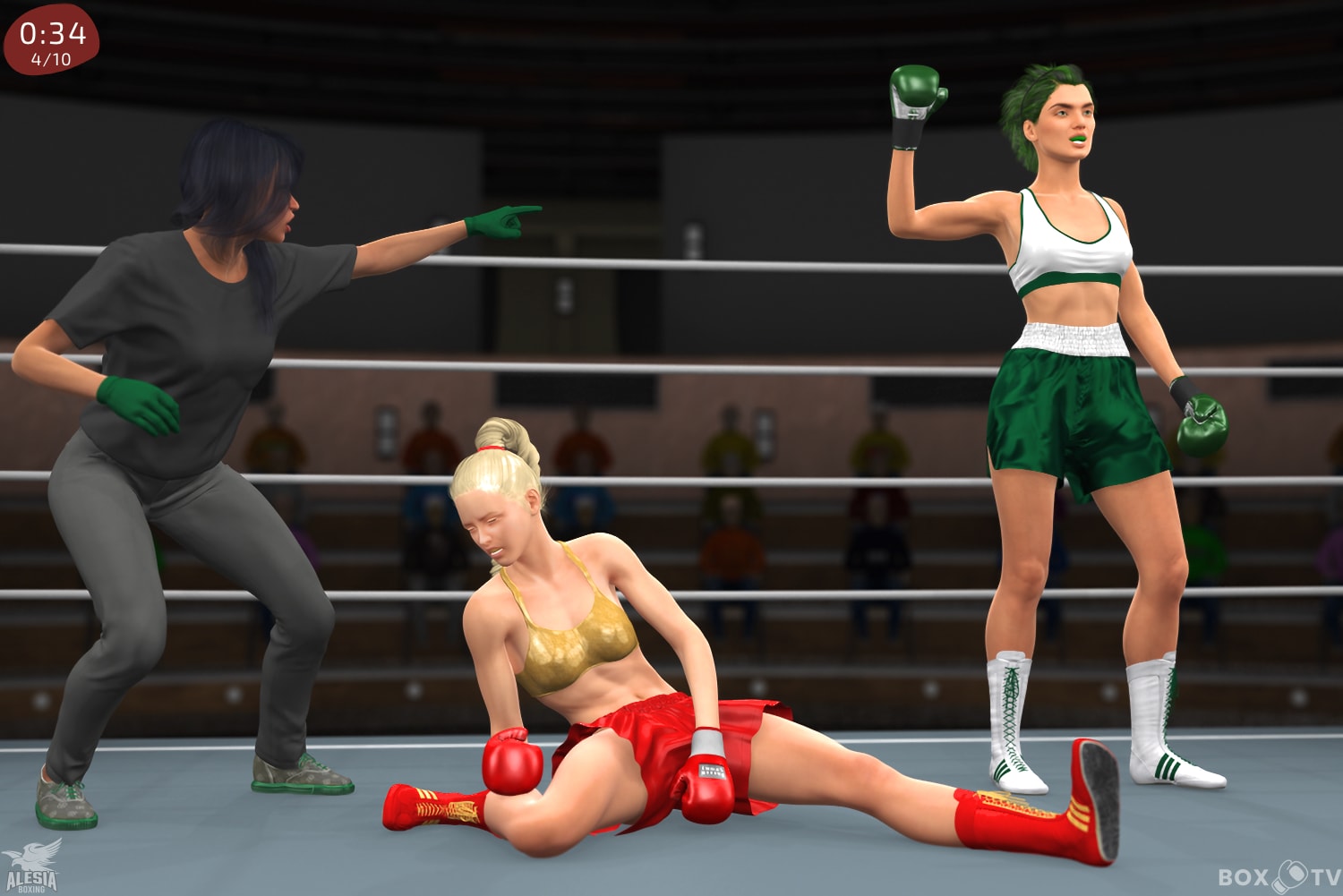 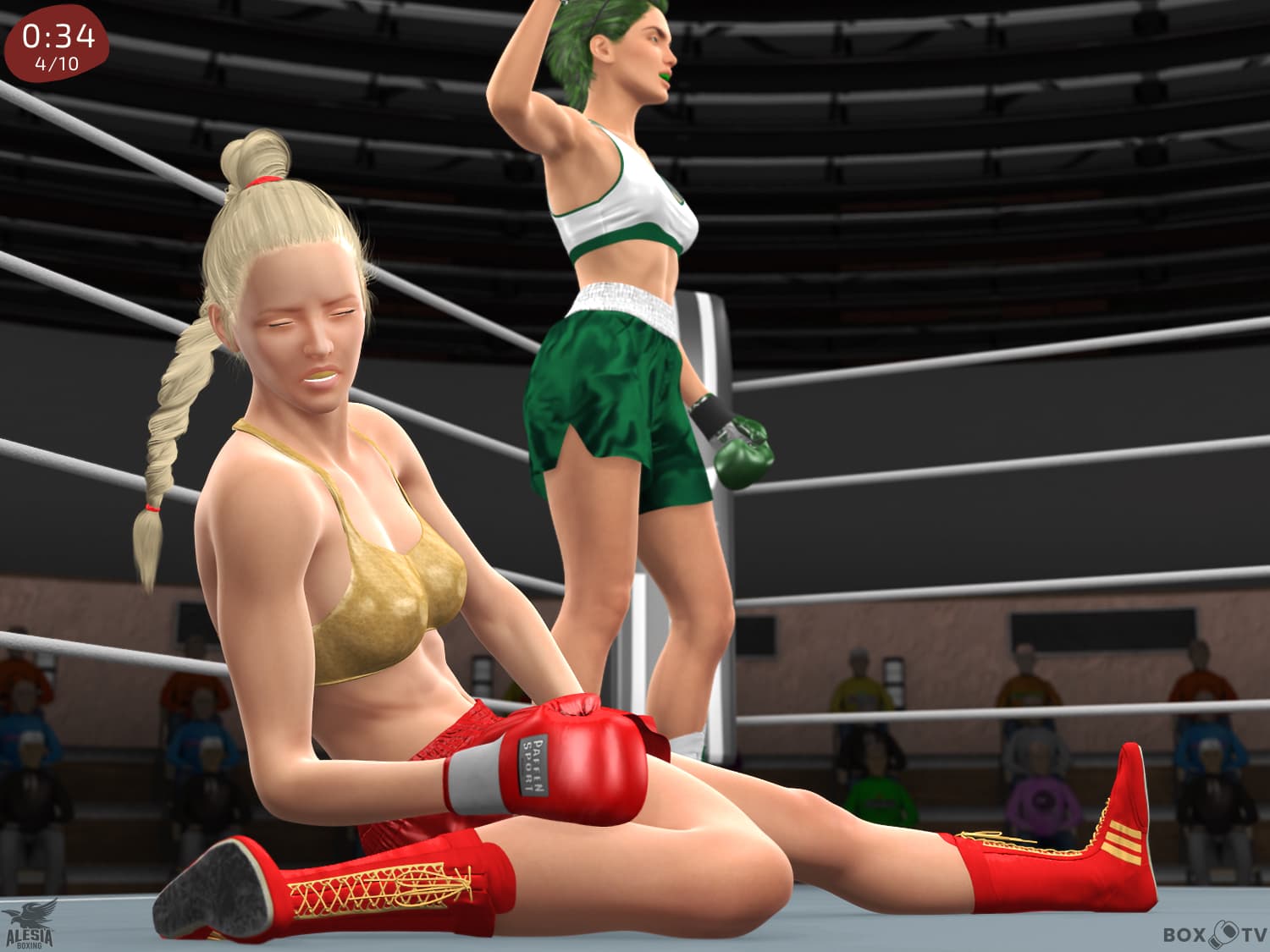 Esther: “Nevermind the questions. Waris shows courage by making it up to her feet. She’s up by the count of eight and yes, she is beating it. Referee Zelda Deniz is checking out her condition and she finds nothing to stop the match.”

Anna: “She also kills the final part of the round with a good jab and movement. She will live to at least see Round 5.”

How does it go in the blue corner? Virginie isn’t about to ask Delara to take it easy.

Virginie: “Almost got her. Now I want more. This chick has talent BUT she’s vulnerable. She’s your pathway to getting better fights, paydays and probably a title shot. She’s just been hurt. Smash her! Stop her now and I tell ya, I’ll pay for whatever drink you want at the bar.”

Virginie: “Even champagne. Now go out there and stop her.”

In the red corner, the German trainer has a different demand.

Maxim: “Ok. You fought well but she nailed you. It doesn’t change a thing. You’re the best fighter in this ring and I want you to get the job done.”

Sarita: “Anything you say, but how?”

Maxim: “Look. You’re one of the best talents. No one can doubt that but there’s the odd moment when you stop believing and that’s when you get hurt. Stop this shit, put everything on the line and give EVERYTHING to beat her. Trust your ability, FIGHT and show that you want this more than she does.”

Maxim: “Honestly, girl. Go for it. You’ve got the skills. Now show the will.”

Anna: “The existential question has been thrown at Waris after getting knocked down. Do you have the fortitude to go for it again after getting hurt? She failed that test before. We can at least say that she currently enjoys a 38-37 lead after four rounds, so it’s not a lost cause if her mentality is strong enough.” 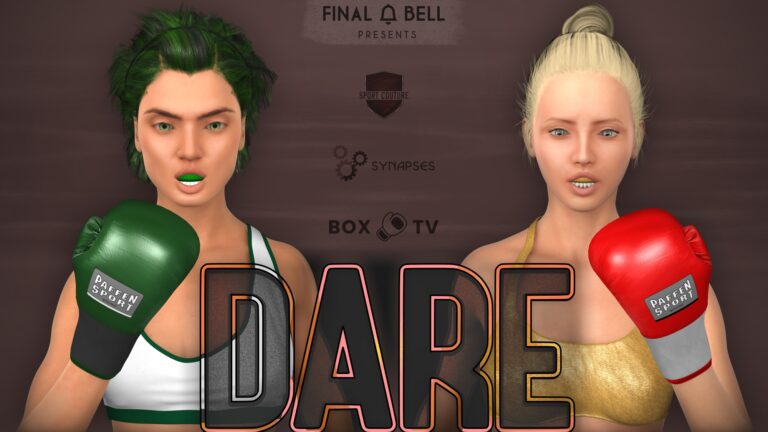 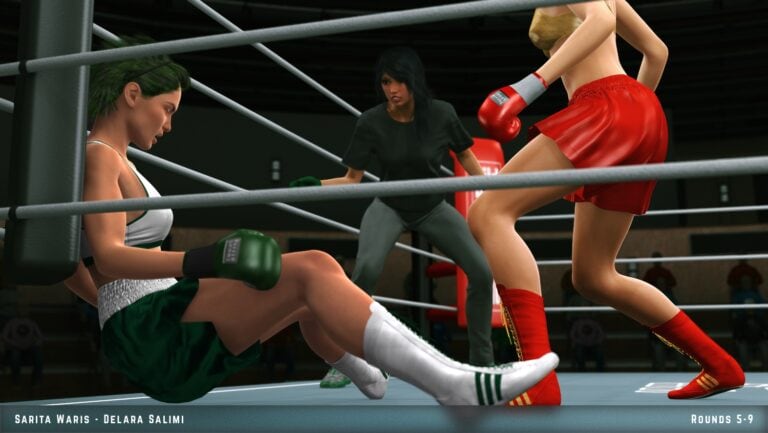