Sarita stuns with a massive KO

When the bell rings to signal the beginning of Round 5, the audience is treated to a surprising display. Delara was expected to come out strong but the crowd couldn’t predict that Sarita would accept the challenge with gusto.

For every attack that the green-haired contender throws, there’s return fire from the blonde prospect. It doesn’t mean that the favourite gets thumped. She scores with clean shots in that engagement.

Esther: “Salimi steps back, lets Waris approach and releases a sturdy right that the Finn cannot lean fast enough to avoid. We may also have seen a body part poking through the white top.”

Anna: “Well played by the British-Iranian woman, who managed her space. As for your other comment, it’s not nipple action. Just a light reflection. Or your mind playing tricks, which is known to happen.”

Esther: “Too bad. A nipplegate could have been called Kontroversy in Koblenz.”

Her broadcast partner rolls her eyes.

The tight battle continues in Round 6. Two women are generous in giving punishment and unfortunate enough to be on the receiving end of it, keeping the fans on their toes.

Sarita makes it a point to use her agility to fight from outside, preventing Delara from catching her off-guard near the ropes or in a corner. The gifted Finn has long arms which enable her to land from a distance, especially when her opponent is reaching for the body.

By Round 7, Delara and her coach are irritated. The established fighter is throwing quality into this but the kid refuses to yield as her ranking, experience and credentials suggested that she would.

The round still swings in the visitor’s favour. She keeps her distance from the blonde instead of risking attacks that would expose her to getting caught on the counter.

Esther: “It’s Salimi’s time to shine in this round and she cracks a resilient Waris’ chin with this peach of a right cross, with timing.”

Anna: “Nothing that will put her down but points are going to Salimi’s bank account, which matters in boxing. Great positioning to lean down while throwing after baiting a right hook to the body.”

Having quit under a heavy burden against Steffi Slater, the Feisty Finn shows that she learned from the embarrassing event. She increases her work rate during Round 8 to throw incessant punches, thus becoming the aggressor. Clearly, this chick has the youth and energy required to fight for 10 rounds.

Anna: “I would be surprised if the judges were to favour Waris on their cards in this second half of the match. At the same time, she is fighting valiantly, with grit that few expected her to have against a Top 10 Super Lightweight.”

To everyone’s surprise, The One You Love To hate keeps it up against a startled opponent in the first minute of Round 10. She throws punches that are threatening enough for Delara to get caught in a corner.

The spunky girl in red and gold is on what looks like a sugar rush. She goes for the taunt used in her previous match with Julie Marks.

Sarita: “Looking for my chin? Right here. Hit me with your best shot.”

Delara thinks: “I’ve seen this trap and I won’t attack it.”

The woman in green and white does what most professional boxers do in the circumstances. She tightens her guard, refuses to bite, and waits for her opponent to do something. Very few will risk falling for a premeditated move. 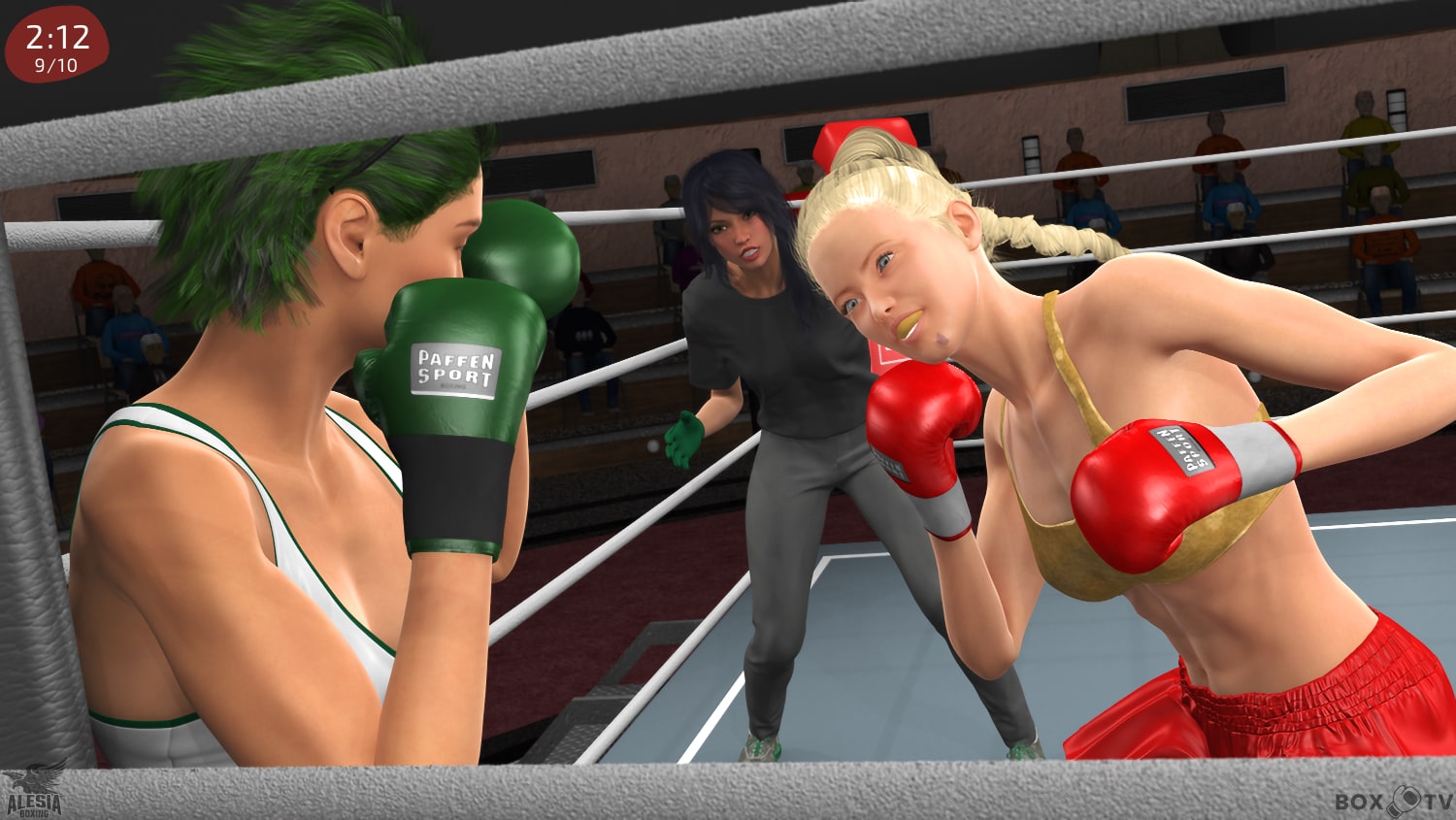 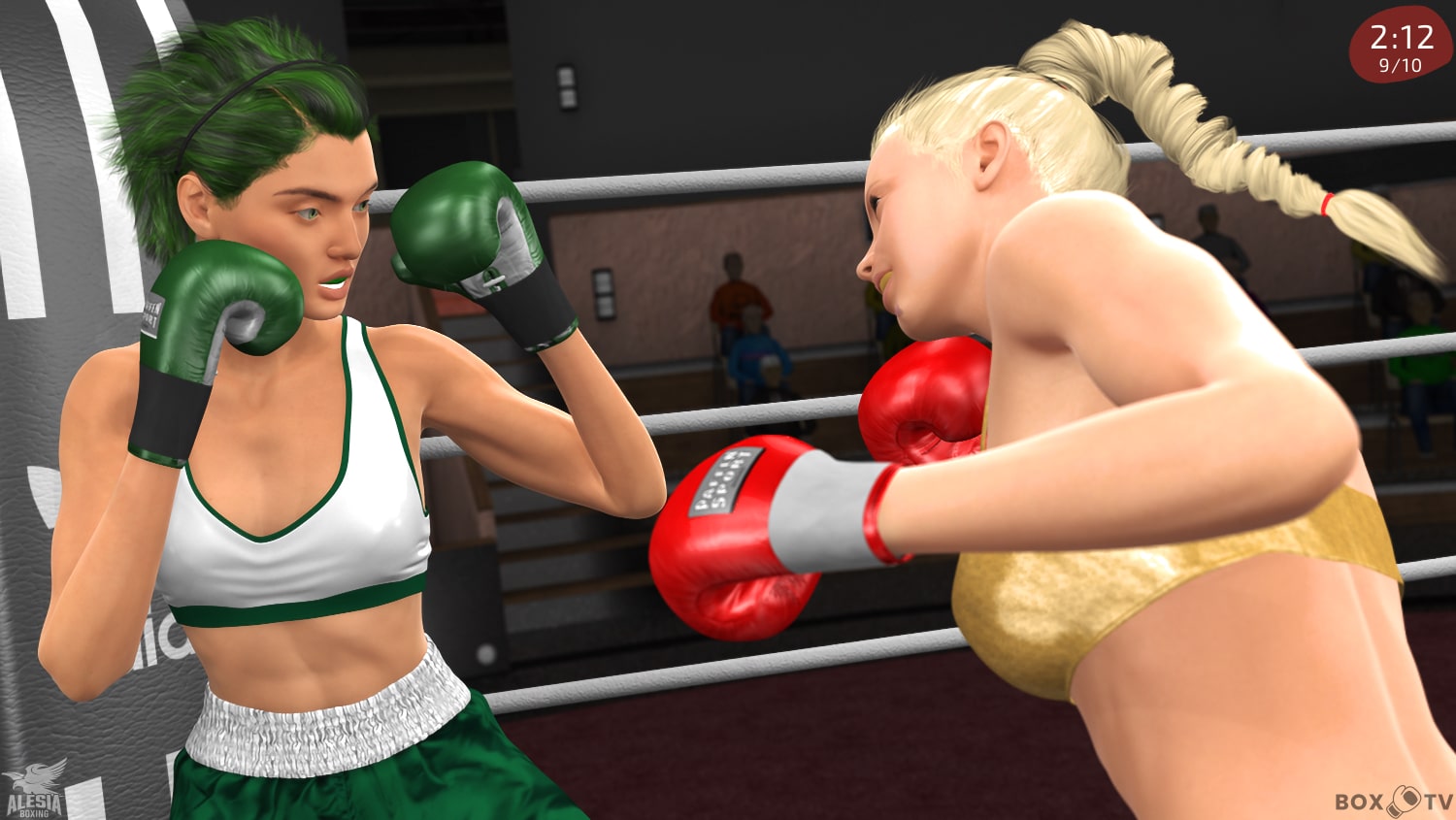 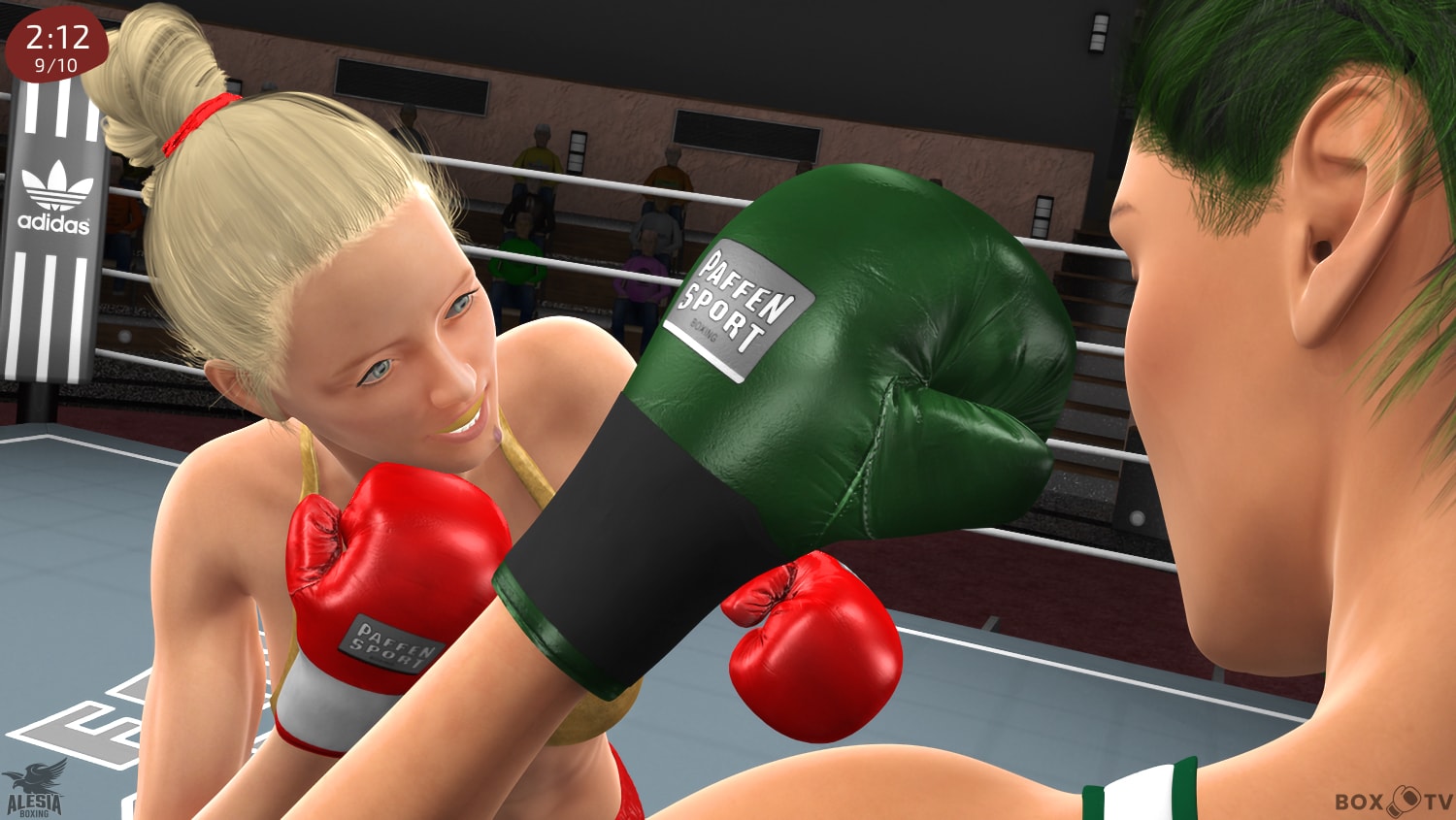 What an entry that is. She twists on her legs for a complete weight transfer. The loose left hand is free to deliver a left cross so fast and explosive that doesn’t just crash into Delara’s jaw. The impact shoves her back against the corner. Leather in the face and leather at the back.

Esther: “How vicious is this? The decision to wait things out is backfiring in a hurry and we have a Salimi Sandwich between a slice of corner and a slice of Finnish toast bread.”

Anna: “It’s a sandwich from hell.” 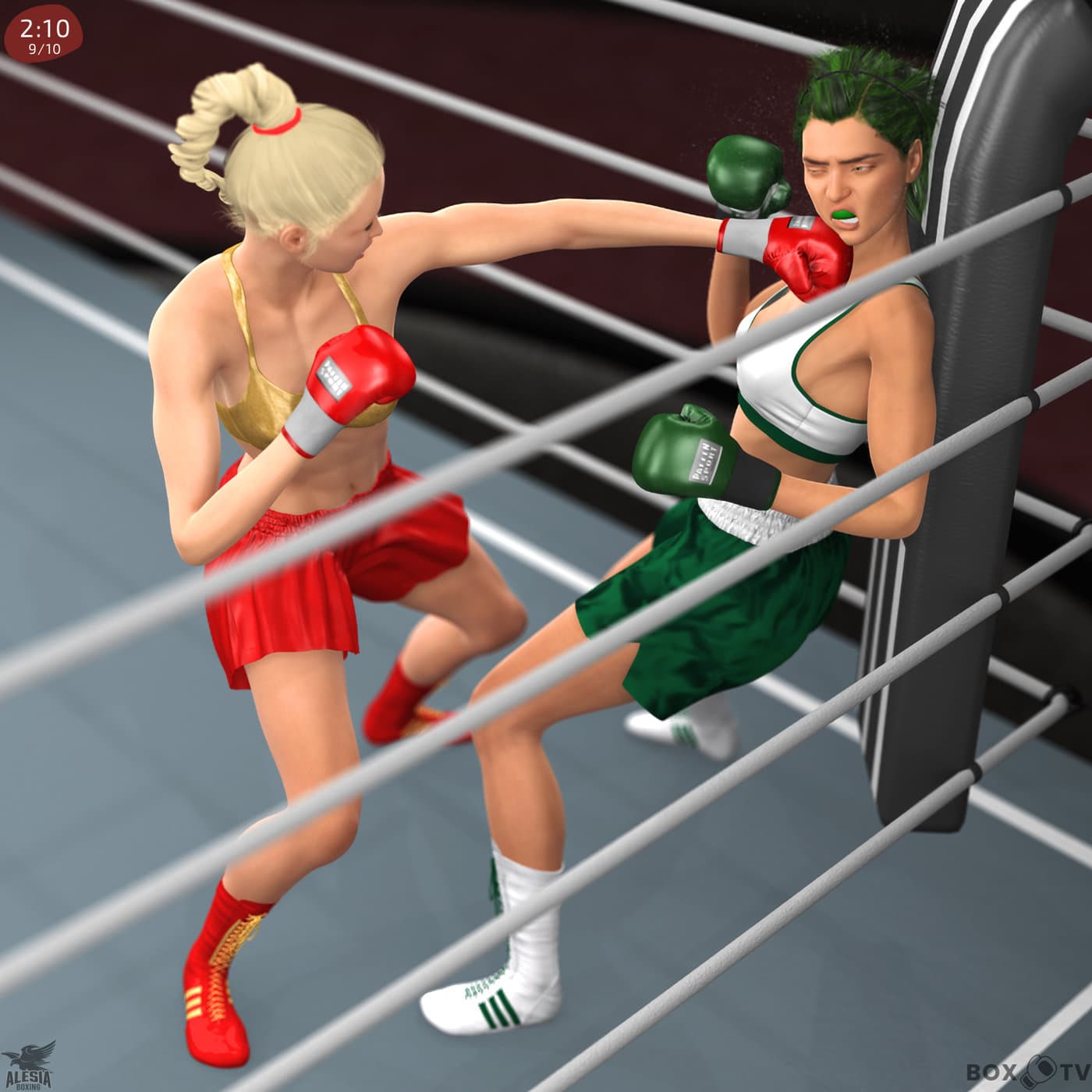 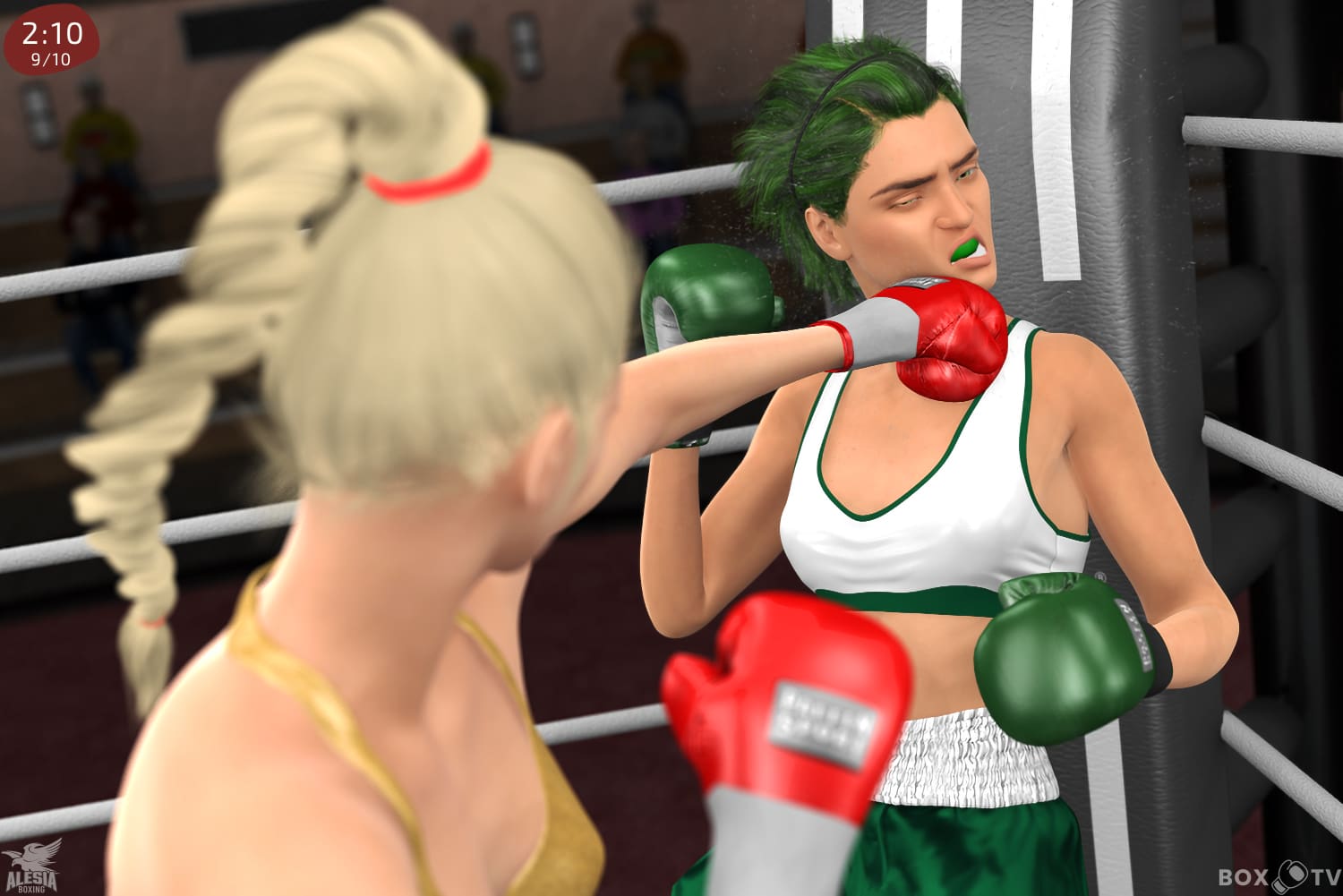 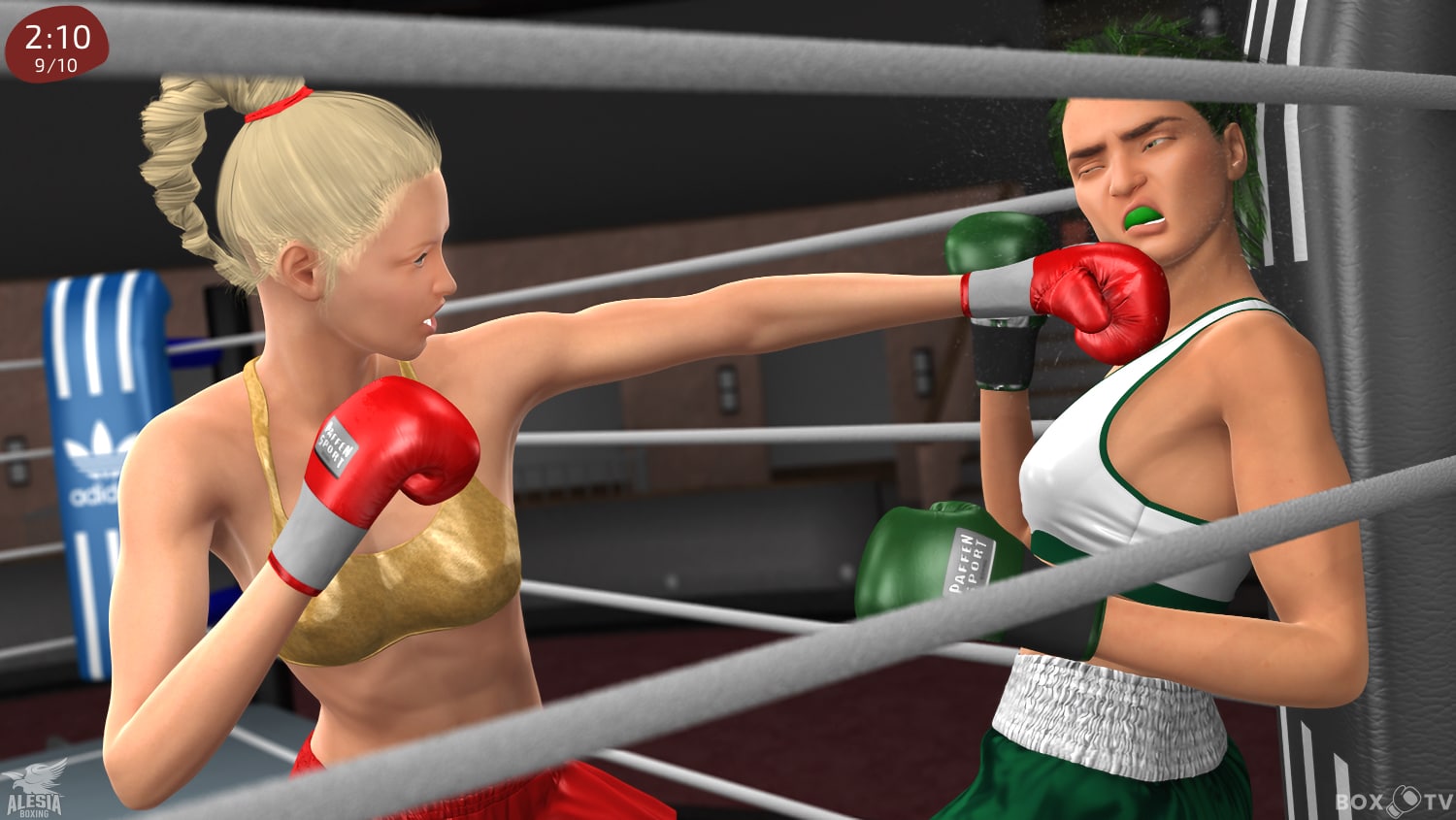 Speaking of toast, that’s just what the visitor appears to be for a moment. She sinks down with her back against the corner, with the audience serving up the usual cheers and boos that accompany Sarita’s performances.

Esther: Salimi is going down! Are we about to witness another big upset in the Super Lightweight division?” 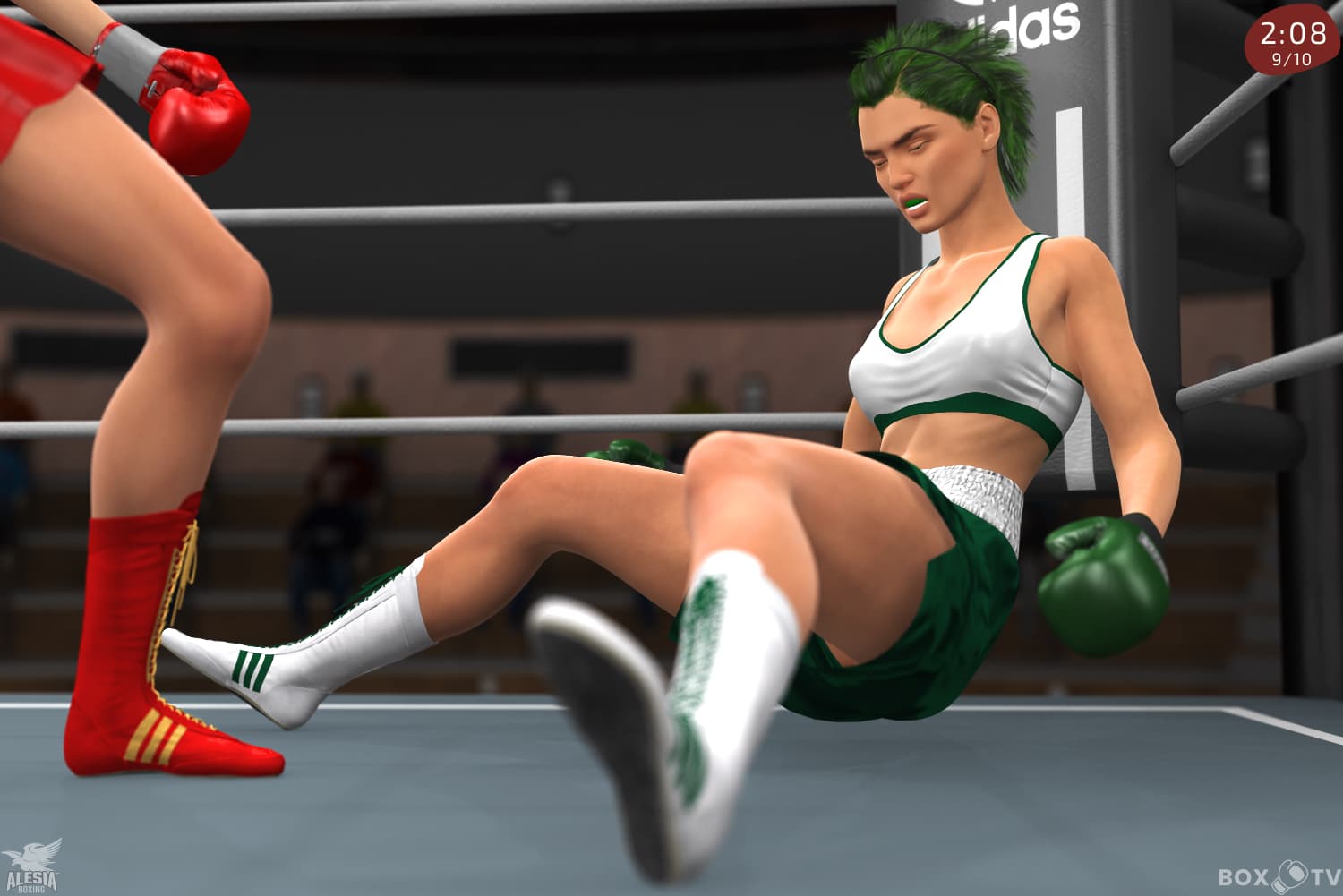 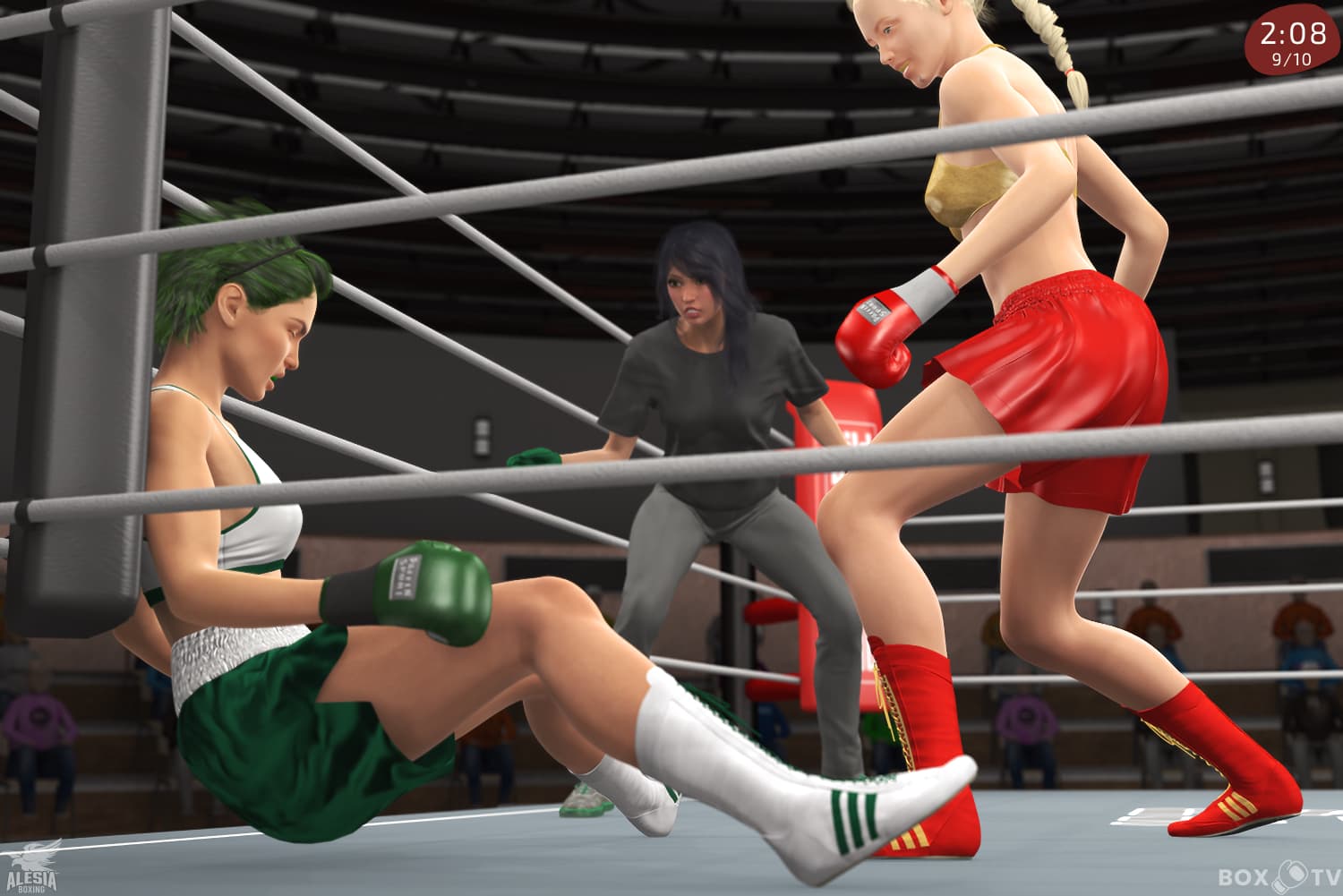 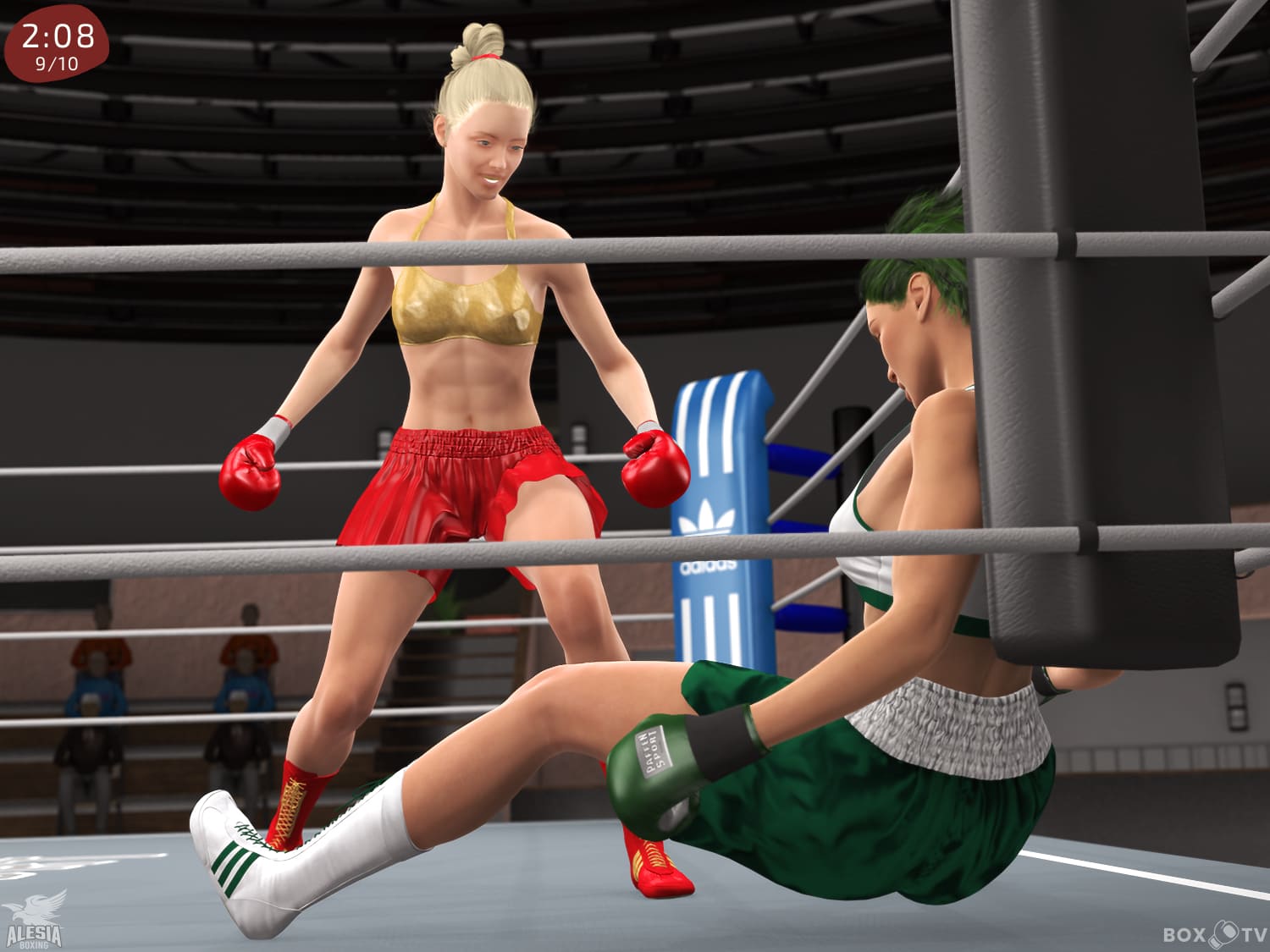 Referee Zelda Deniz orders Sarita to retreat to the other neutral corner, across the ring, before assessing the down pugilist’s state.

Esther: “Sarita Waris delivers on her promise to turn what is normally a workout for a top contender into her worst nightmare. Scoring a second forceful knockout in 2022, for an upset that will certainly make boxing fans talk.” 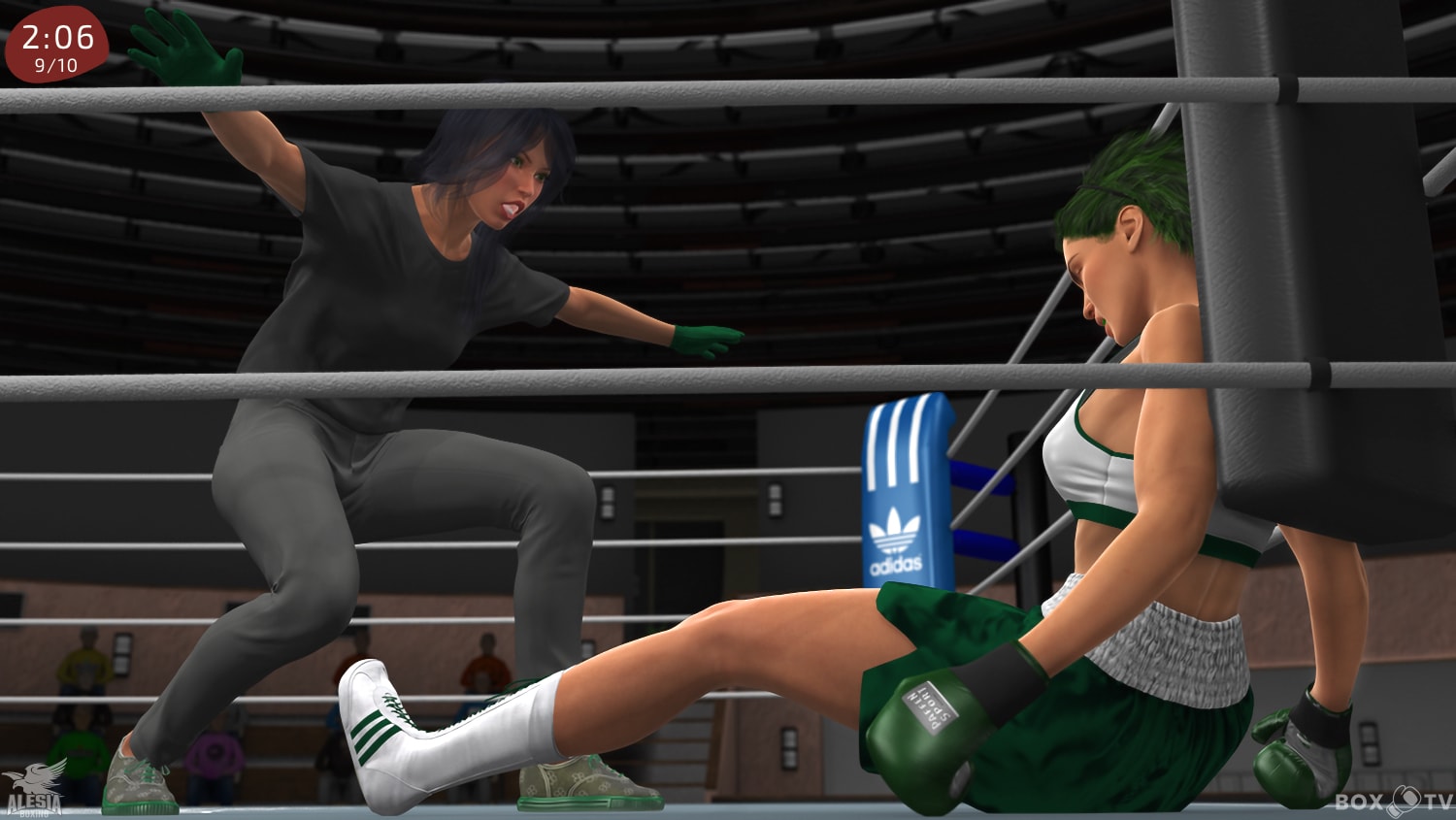 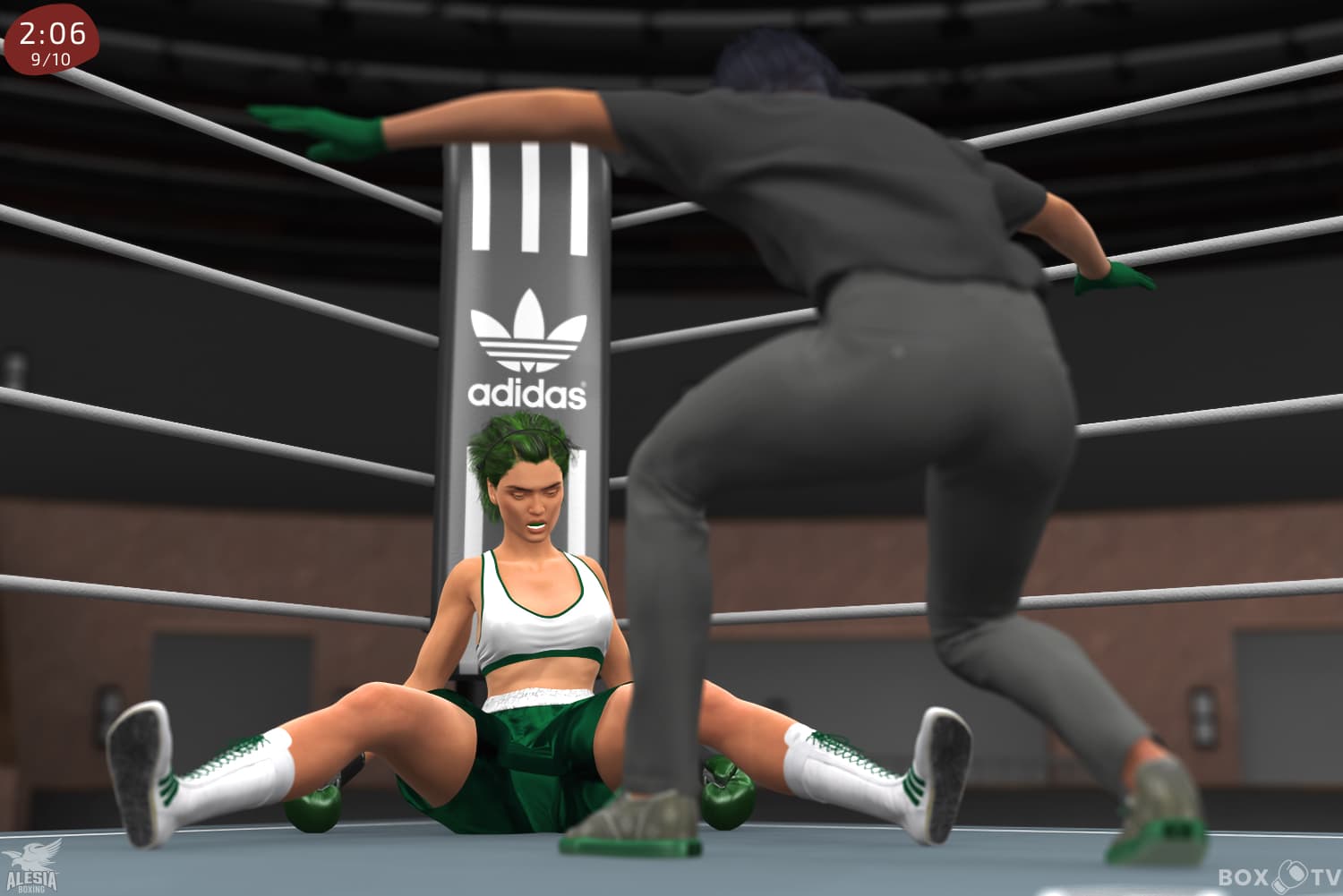 While Virginie and Zelda are busy tending to her victim, Sarita goes wild to celebrate the win. She throws a roundhouse kick to an imaginary kickboxing opponent. Her extravagance makes the crowd’s mixed reaction intensify.

The victor is presented as the match winner after improving her record to 5-4 with four knockout victories.

What does she say to Anna during the interview?

Sarita: “I told you all that this would happen. I warned that I’m the real deal and many people didn’t believe me. Now you have proof with a number six sent packing. I’m a bad ass, not afraid of anyone and I’m NOT about to be beaten. Anyone, anytime, anywhere. No one is safe. Bring it, bitches!”

You know what, though? She’s good. Real good.

After being comforted by her coach Virginie, Delara isn’t equally cheerful.

Delara: “I got knocked out by Waris. What an embarrassment. I got no excuse. No explanation either. I failed, purely and simply.”

The final word goes to Anna, who delivers one of her post-match critiques.

Anna: The quicksands of the Super Lightweight division have struck again. A controversial, talented boxer who previously bombed has detonated a load of TNT in Koblenz. Love her or hate her, Sarita Waris will have to be taken seriously.” 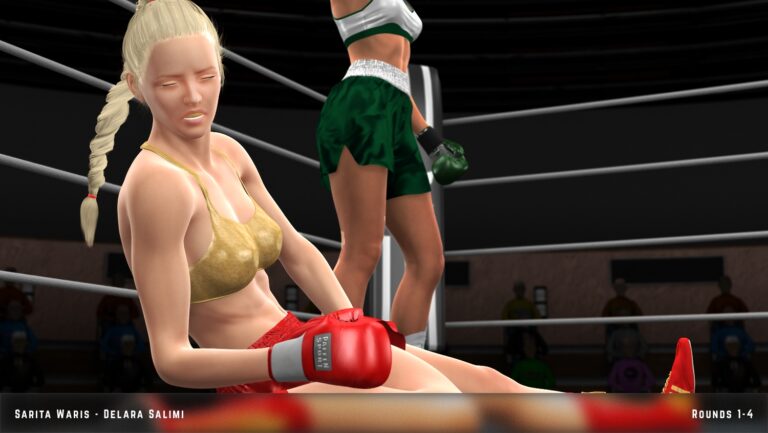