Did anyone say ‘get physical’?

Kanti gets into the middle of the ring, looks at her judges and officials and points to one who isn’t ready yet. Once everyone is toeing the line, she opens her left hand and waits for the bell.

Esther: “Alesia Schumann and Chelsea Carter for the thrill of the battle and, oh, the Super Lightweight world championship belt. Enjoy.”

We get typical fluid movement from Alesia in the first and tentative stage of the match. The butterflies in Chelsea’s stomach fly away as she paws her jab and measures distance. Many boxers find that action is easier on the mind than anticipation.

The American knows very well in what circumstances she’s fighting. Alesia is at home and the favourite to win. A quiet first engagement means she gets the points. So the visitor creates action by pumping for a mirrored straight left before switching to throw a fast right cross.

The punch is so sharp it’s impossible to avoid, but the German has enough wits and speed to adjust her torso to minimise the impact. The red glove brushes her cheek.

The school of timing

The blonde picks up the pace with her footwork. Giving away the middle of the ring, which is typical of a counterattacking expert. Letting her hands go just enough to keep the brunette busy so she can’t walk in and do whatever she likes.

The effort generates a nice result at 2:17. A daring Chelsea fakes a body shot and darts forward to aim at Alesia’s forehead with a jab. The former world champion plants her left foot and puts torque on the right side to deliver a right hook from underneath. PISH! The crowd cheers.

Esther: “Schumann scores from an angle. Reading movement before putting white leather on Carter’s cheek with the accuracy of a university librarian squeezing a book into a packed shelf.”

Anna: “Schumann University? We see her PhD in Timing on display with a very accurate right hand Carter couldn’t defend herself against.”

Chelsea thinks: “Here she is. Can’t let her get into a rhythm.”

High Voltage opts for physicality. She seeks contact at every opportunity for a simple reason: it’s hard to throw your best punches when you get pushed around.

The tactic is successful. The Bavarian gets caught into a clinch. For once, an opponent has enough raw strength to make it a tussle when legs provide support for the shoulders that are pushing forward. Chelsea’s past work in gymnastics is paying off there.

With a stalemate in front of her eyes, the tolerant referee steps in.

Going for the skull

Does it mean that Alesia can be bottled up and under control? Hardly. The Diva weaves her way around the incoming as she further seeks physical contact to smother her game. With the action moving to the centre of the ring, Chelsea goes for a grab and Ally keeps her left hand high. When the American goes for the grab, she lets the loose hand fly to hit the back of the head.

Esther: “Schumann lands behind the ear and while this may not impress you as much as a clean punch on the tip of this chin, this sort of hit can hurt.”

Anna: “It rattles the skull, and skulls don’t like getting rattled.”

Chelsea goes back to throwing punches and meets another proposition. Alesia takes her Philly shell stance, rolls with the punches which slide against her shoulders.

Well into the final minute of the round, the American is frustrated by the number one contender’s chess game. She throws herself forward to attack. Alesia reacts with clockwork accuracy by latching herself onto Chelsea, who has no idea what to do. 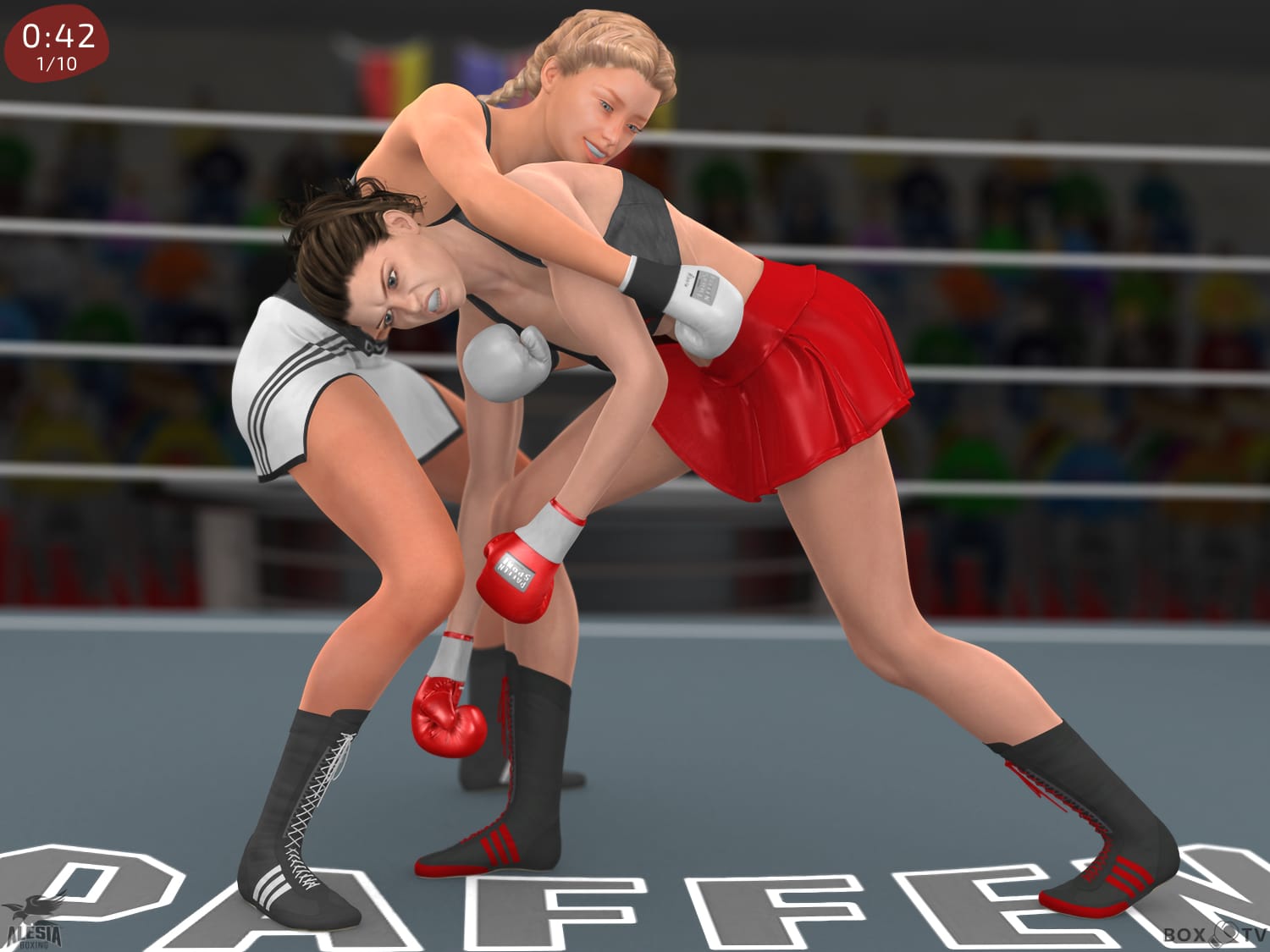 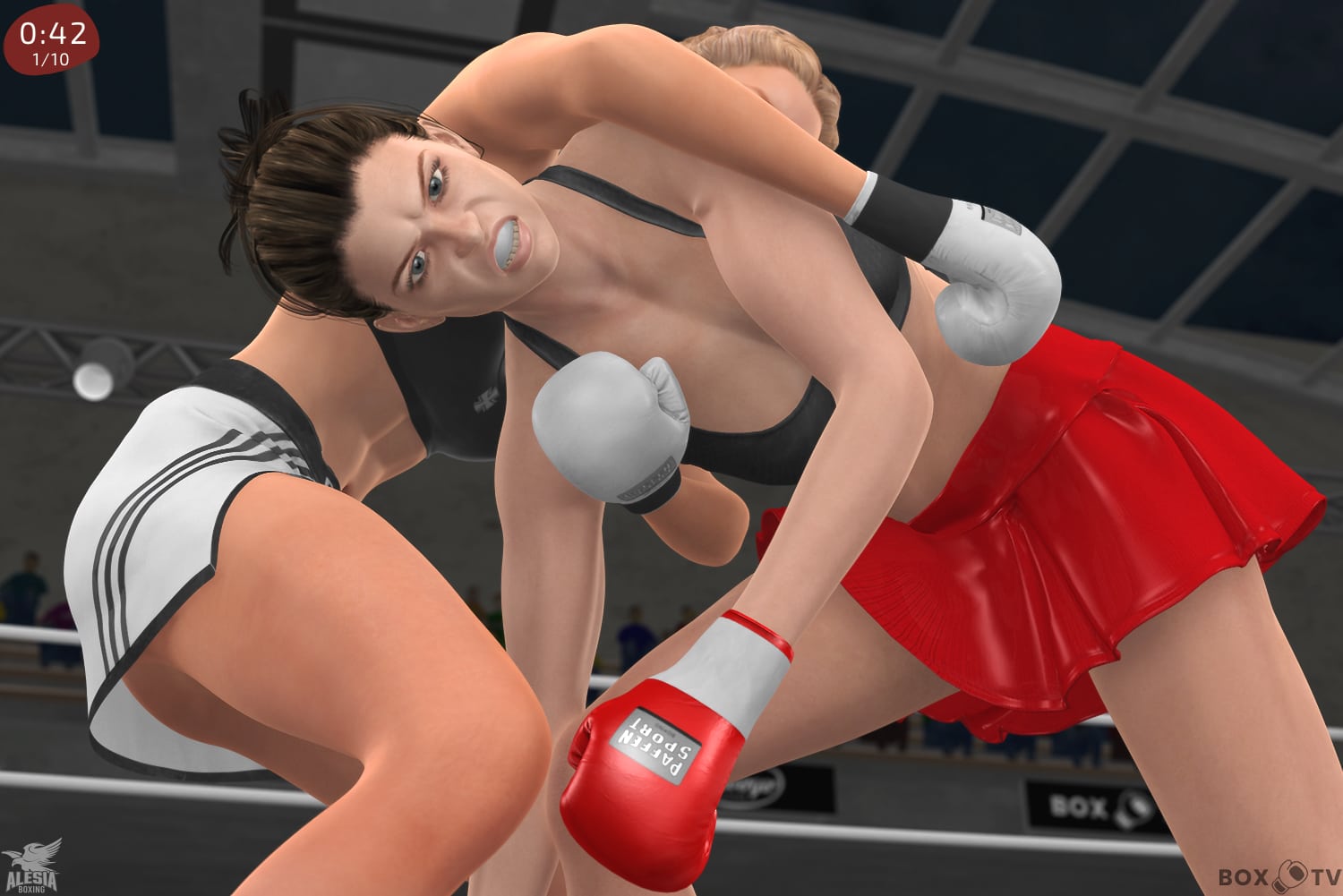 Kanti makes them break again, probably establishing a personal record with two interventions in a single round.

The visitor gives her a piece of her mind.

Chelsea: “You’re letting her do whatever she likes!”

Kanti: “Did you come here to fight with your mouth or your fists?”

Alesia thinks: “Maybe I should throw a punch because she never said ‘stop’ but… WTF.”

The Diva shrugs, making part of the audience laugh.

The two ladies go back to throwing punches only, producing a few inconclusive exchanges.

An official taps three times to signal that 10 seconds are left.

That’s when Chelsea springs forward to throw a left hook. Alesia reacts instinctively to slip under it and let her left uppercut fly. It lands squarely just under the liver.

The pain forces the brunette to respect the blonde for the remainder of the round. A few seconds before the bell rings.

Esther: “Schumann sealed the points for Round 1 with a rib-shattering left uppercut. Excellent timing to counter a right hook that would otherwise have been very painful to receive.”

Anna: “She’s been playing a physical game in response to Chelsea’s work but in the end, it’s clean and effective punching that makes you win in boxing.”

The two women walk back to their corners under applause. Let’s join the American camp on the blue side.

Mercedes: “Not bad. Ya had some good ideas but she reacted well. Gunna need ya to focus on punchin’ cuz grapplin’ ain’t gunna make ya beat Alesia! She be better at it and being annoyed made ya lose focus.”

Mercedes: “We been workin’ hard on dat game plan. Gunna need yer hands to do the talkin’. Switch hittin’ with fast, frequent punches from all directions. Dats how ya beat Alesia, who can be outboxed if ya do it right. Understand?”

The talk is smooth in the other camp.

Regina: “Good work, babe. You made the right moves in reaction to what she threw at you. I want you to keep that mindset. Stay alert. Move well. Frustrate her and go for the hard punches when you create an opening.”

Anna: “I believe that Round 1 is a no-brainer. Alesia Schumann scored with the best punches and displayed solid ring generalship at the expense of Chelsea Carter. What do you make of the action, Virani?”

Virani: “Thanks Anna. Chelsea Carter got a full dose of the Alesia Schumann experience, and it was the German’s experience that really shined through that round. She’s dealt with physicality in a similar fashion before – she’s letting Chelsea know that she can’t be pushed around. Alesia also importantly didn’t fall prey to one of her classic slow starts. A good start from the former champion. That’s what Alesia wants – she wants Chelsea to feel the pressure of having to fight from behind.” 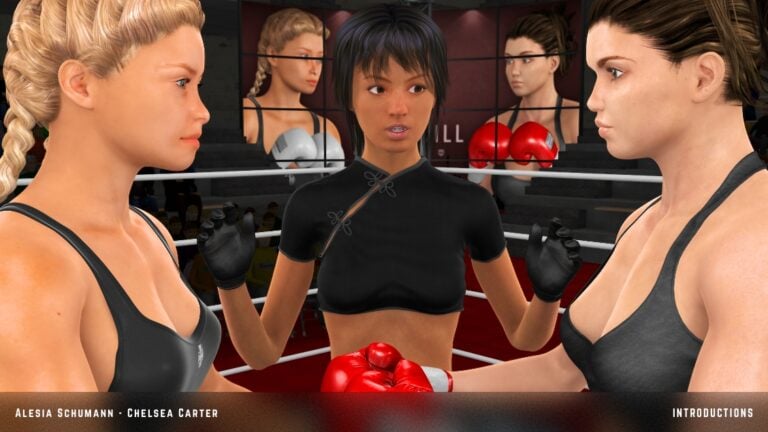 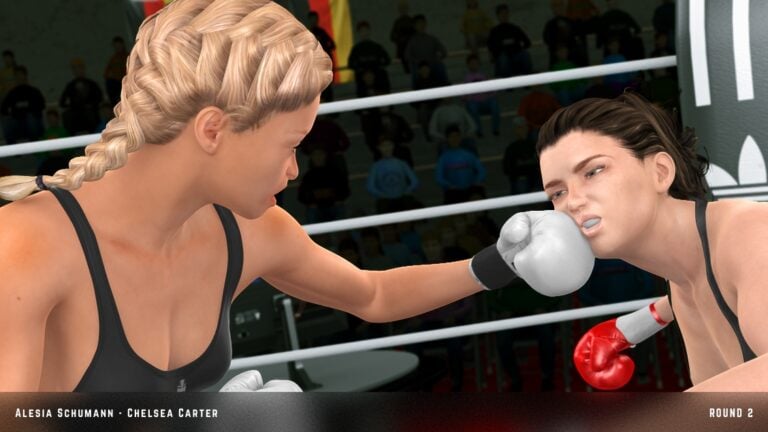