War breaks out in Round 2

After a tight opening round and some advice, the bell rings and the new engagement starts with skirmishes. Two women throwing tentative punches to create something out of nothing. Looking for a chink in the armour of the opponent.

The German’s work rate surprises the American. She isn’t just sitting back and countering but moving swiftly, including fast attacks that throw her off guard.

Alesia’s jab comes in abruptly and makes Chelsea cover up, messing with the rhythm she would like to establish.

The ducking motion creates an opening in the middle. The Diva sees it and her loose right hand is in perfect position to shoot up and meet Chelsea’s cheek for a good jolt.

Esther: “Schumann’s scores with a fast uppercut, which was made possible by the jab thrown a split second earlier.”

Anna: “This is exactly why you pepper fighters with the jab. This punch rarely hurts them but it changes their stance and that’s sometimes enough to land a clean blow shortly afterwards.”

High Voltage sets herself on the task of working harder. It’s the Joe Calzaghe method. It’s hard for someone to do as they wish when they always have to deal with incoming fists. Chelsea does it with a twist: switch hitting. Adding a short right hook and a long right cross to the collection of punches makes the flying red gloves that more potent.

It works because Chelsea’s movement becomes more confusing to decode. Ally launches a jab before following up with a right hook when she expects a left cross. Instead, the brunette responds with a long overhand left hook that lands flush. 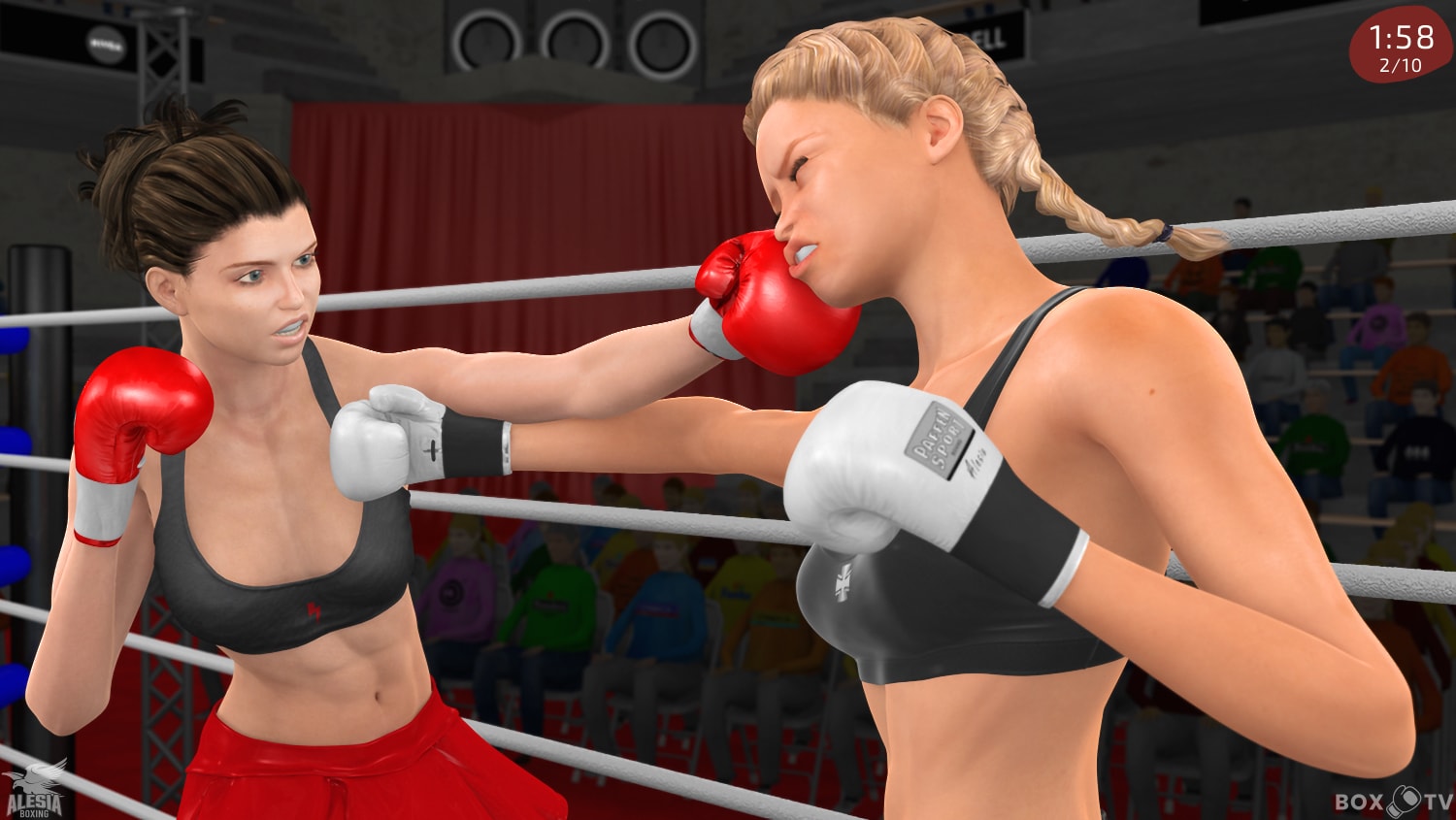 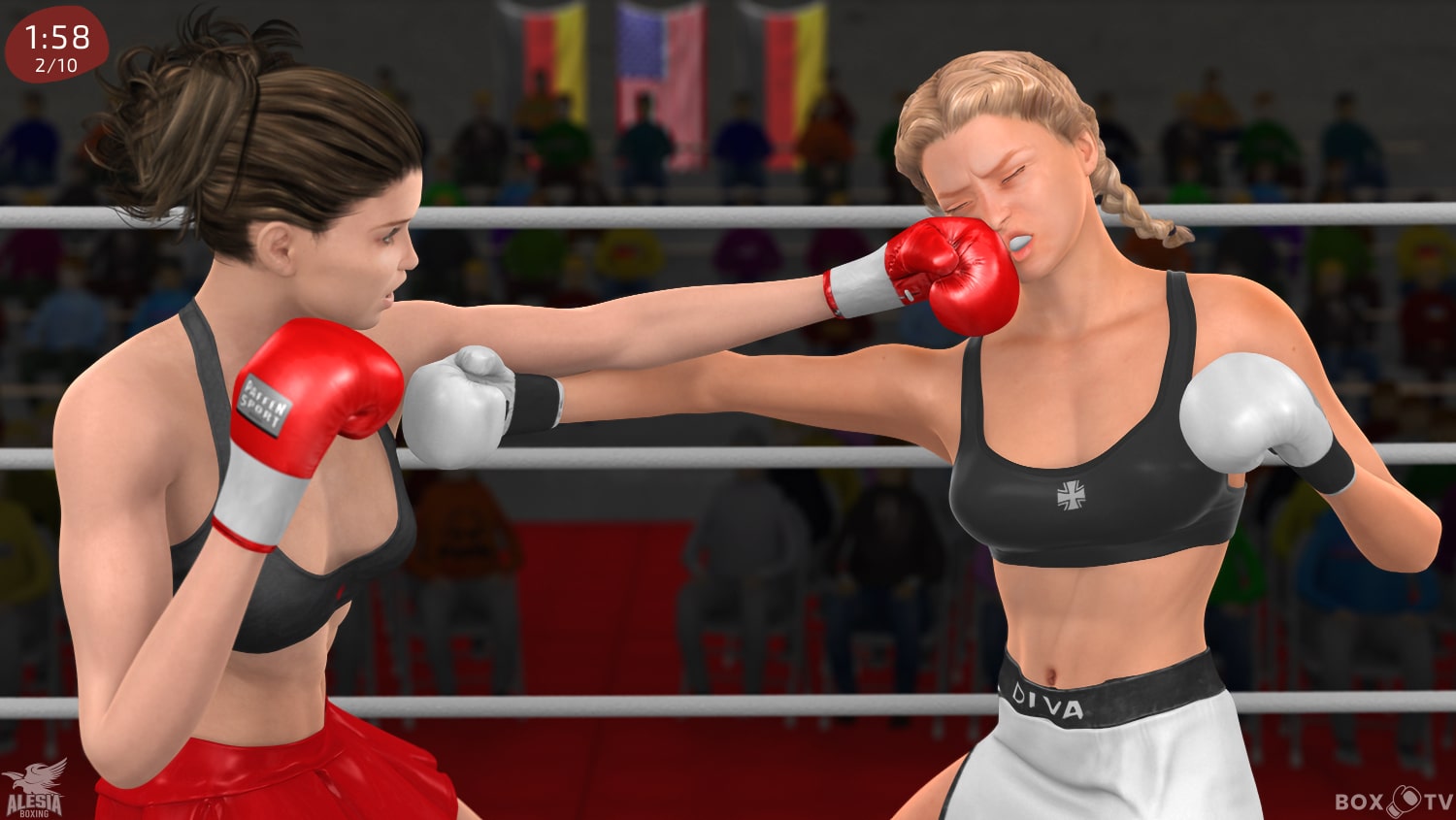 Seeing her friend in pain makes the electric girl buzz with confidence. She sets out to attack with incisive punches that make the Bavarian fight firmly on the back foot. The visitor’s firepower can only be delayed for so long when that happens. She slips under a defensive jab to land a sharp uppercut in the ribs.

The grunt that comes out and body language that follows makes the result obvious.

Esther: “Schumann is a little hurt here! She got caught by an excellent shot and is retreating around the ring to find time and space to recover.” 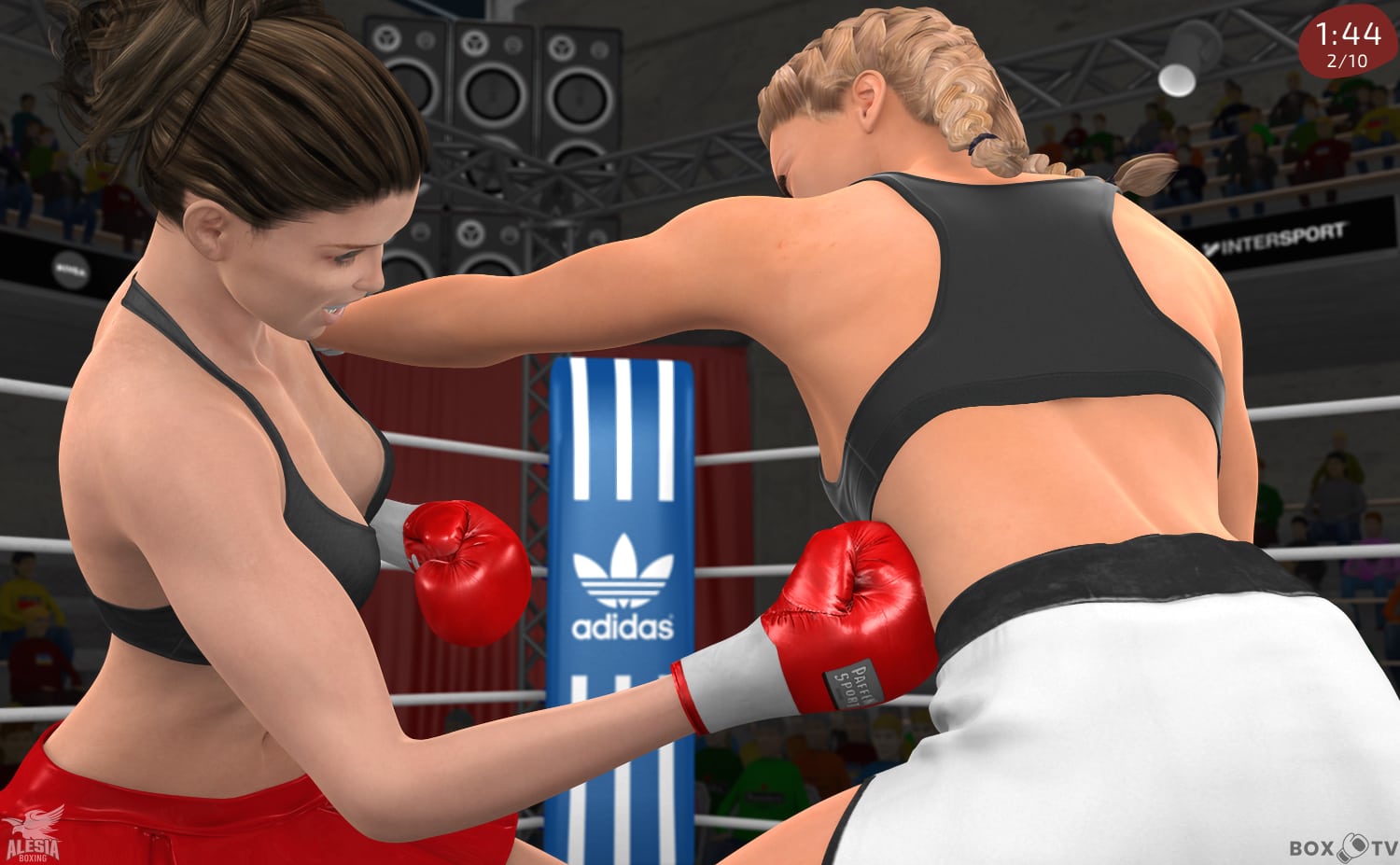 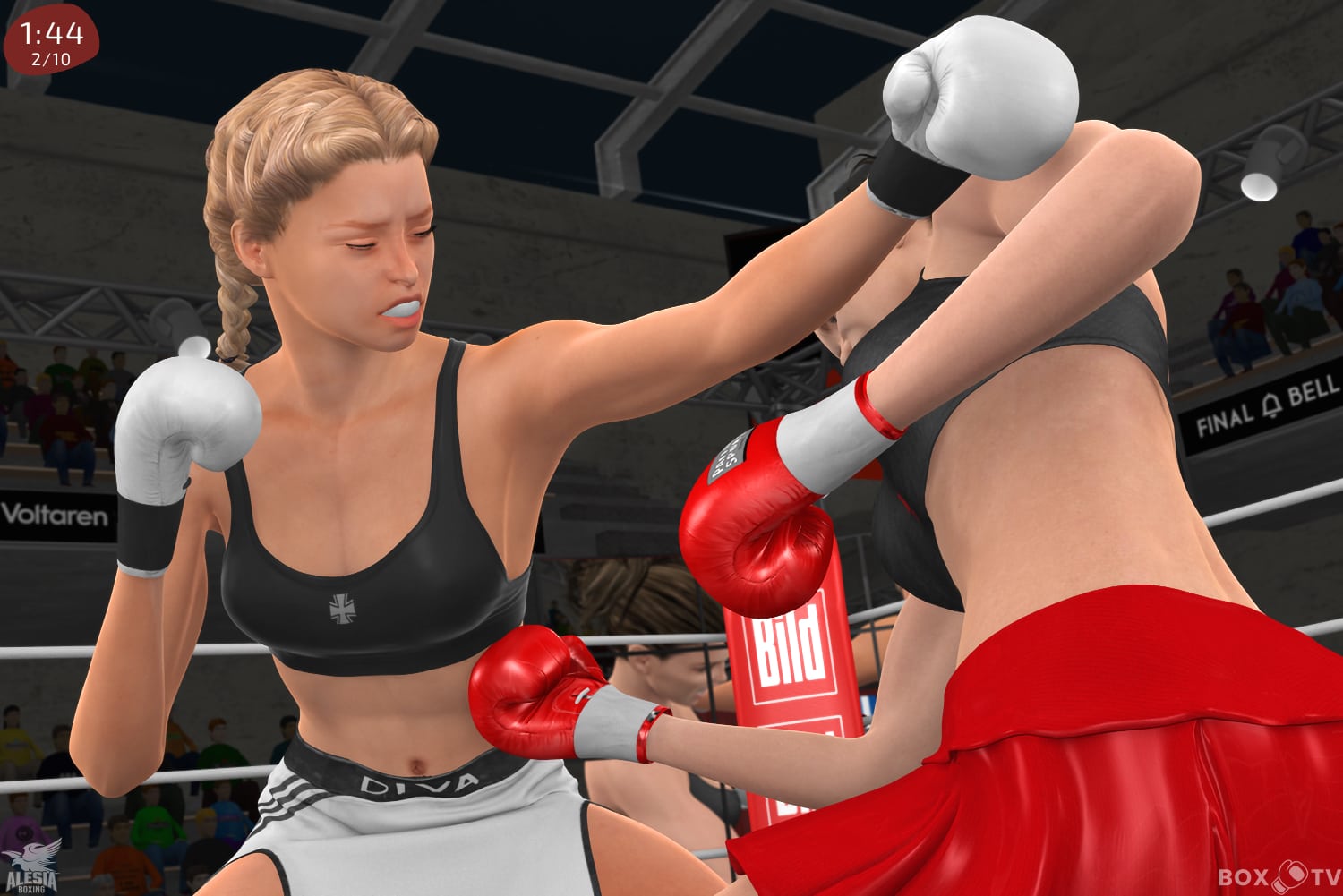 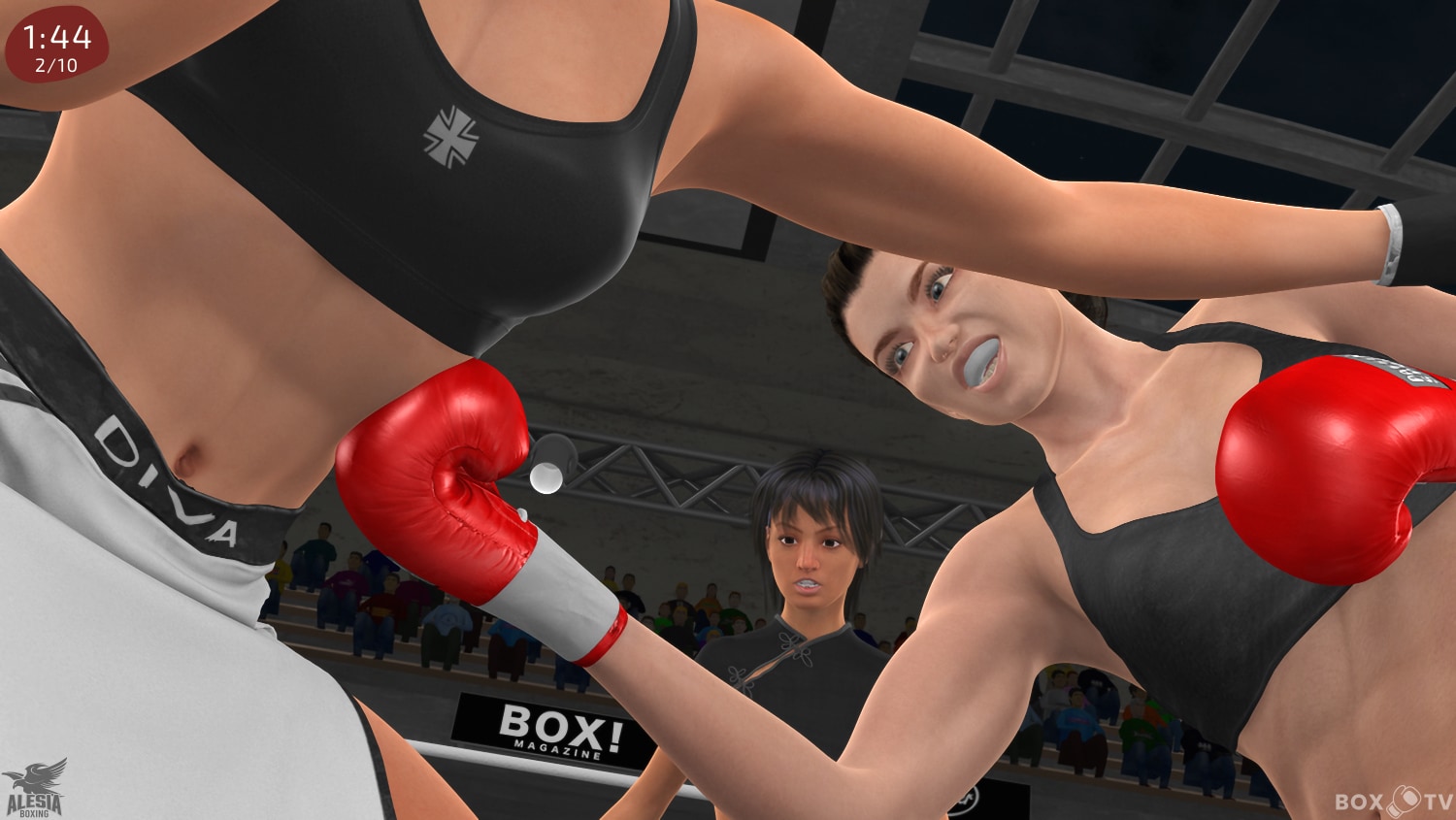 This being the 20th match of her career, the blonde knows what’s coming if she doesn’t mount a robust response. An irresistible torrent of violence.

The German champion starts matching the former American champ’s work rate to fight fire with fire. Throwing her white leather liberally to reverse the tide. At the same time, the section of her loudest fans offers encouragement with three bangs on drums and the “A-LE-SIA” shout.

Alesia has Chelsea near the ropes under heavy pressure. The girl in red and black’s brain sends mixed signals to her body, trying to escape while throwing a left hand. The result is a slip and loss of balance. An opportunistic Diva crunches her cheek with a left hook from a very favourable position.

Anna: “That’s the mark of a seasoned veteran. Alesia flips the action to land clean when she needed it the most.” 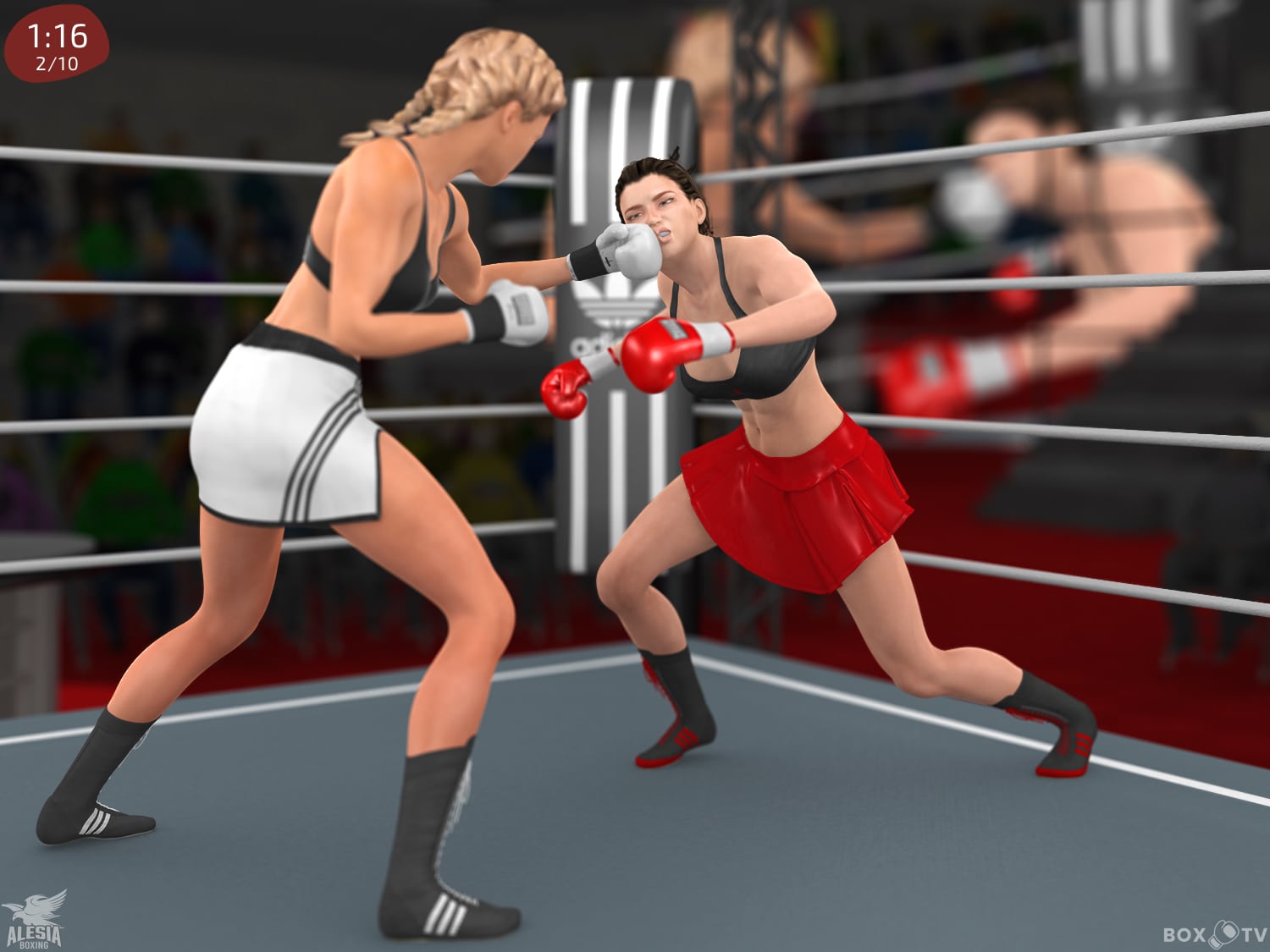 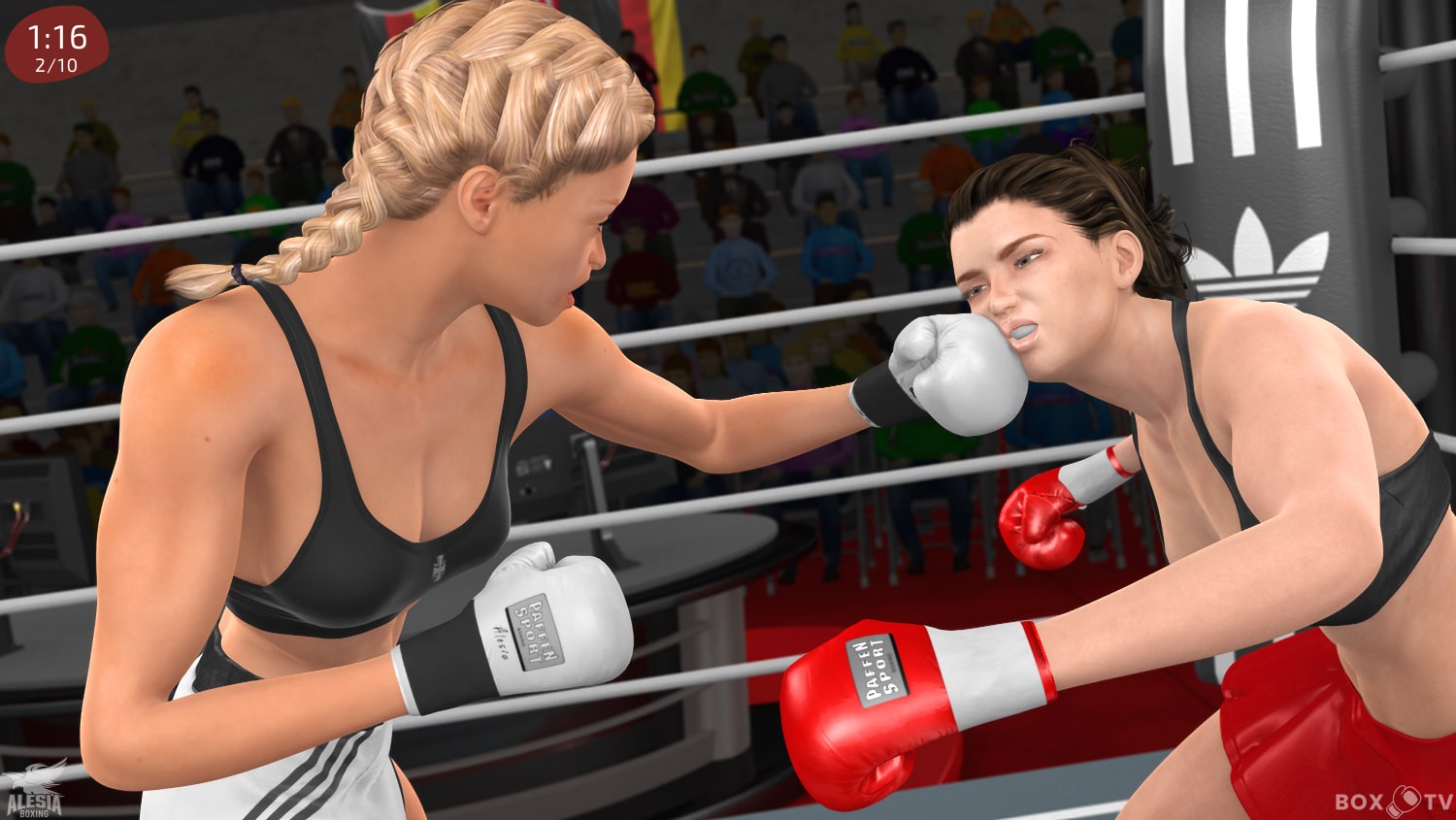 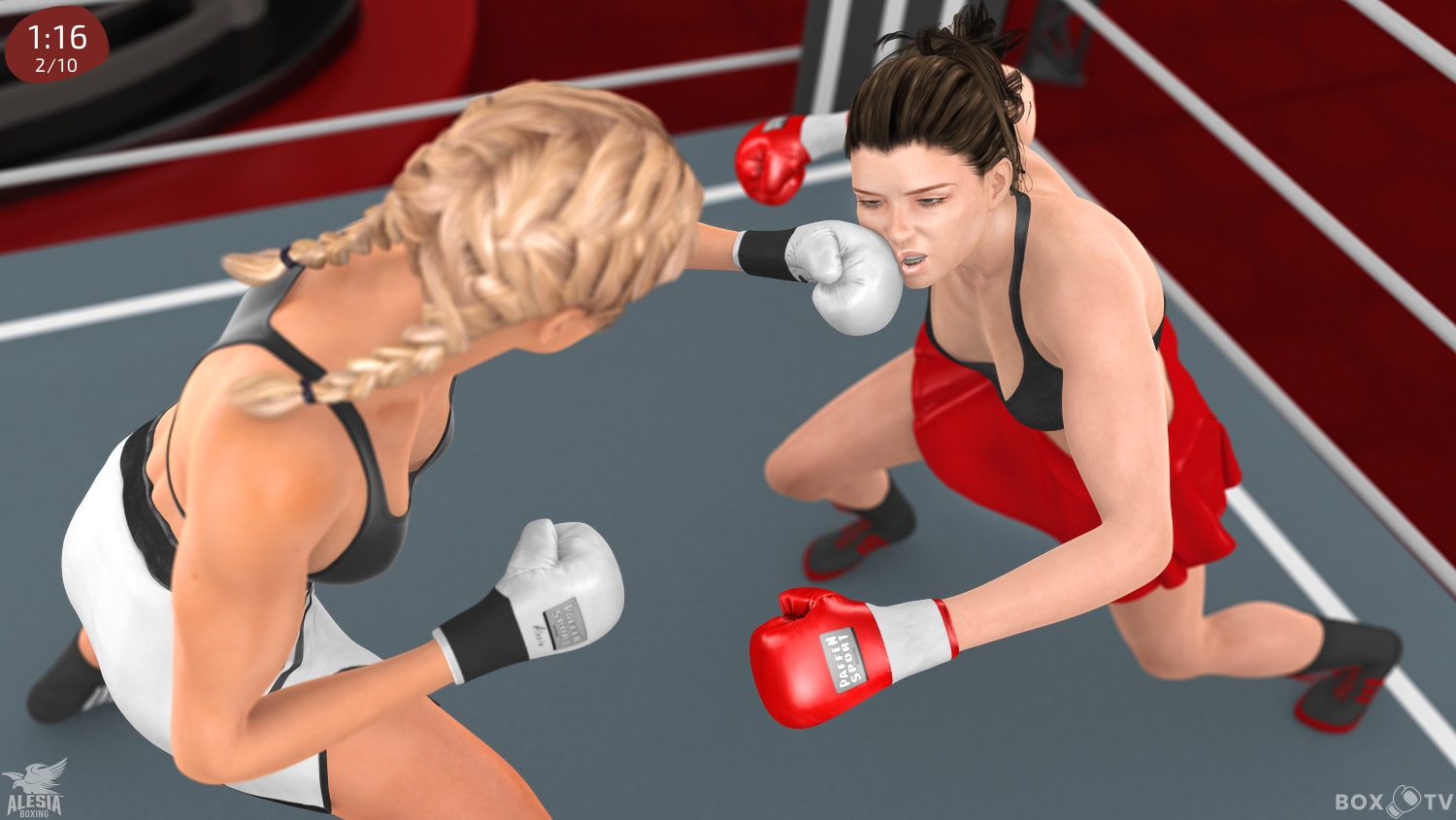 The next stretch is an All-Diva affair. Unbridled aggression in the hope of taking the round, to signal that being active isn’t enough to prevail.

Chelsea battles for respect around the edges of the ring. She steps back and looks to throw a looping left hook while turning so she can escape sideways whether the punch lands or not. Alesia comes in with a sharp right hand to disrupt that motion. It lands clean, making the crowd cheer.

This turns the round into an all-out war. Action moves towards the middle of the ring as the contestants throw flurries to try and have the last word in each exchange. Cheers get constant because the audience loves the sight of pugilists truly going at it.

With punches flying around like lasers, Chelsea is able to put her stamp on a key exchange. Alesia is opening up for a left hook but she gets countered fast by a straight left from an angle. Pish!

Esther: “It’s open season on both sides! It’s only Round 2 but Schumann and Carter are acting like they want to convince judges to give them decisive points in Round 10.”

Anna: “It takes stamina to be that active in any round. Their objective is that punches landing will deplete the enemy’s reserves faster.”

That’s right when one of the contestants’ traditional instincts kick in.

Alesia thinks: “She wants a slugfest. I’m not going for it. Gonna kill some time.”

She wraps herself up in the Philly shell and turns on the engine to move in circles while leaving the centre of the ring to Chelsea. The brunette finds the hunting experience frustrating while trying to add to the tally of punches landed.

Esther: “We’re along the ropes late in the round and Schumann makes Carter miss with her explosive left hook, leaning away from it on the right.”

Anna: “This one missed by a good margin. Didn’t even brush the shoulder.”

Heather: “What do you make of it?”

Sophie: “Good match so far. Ally’s a little ahead but it’s not going to be an easy one.”

Heather: “Yeah. I think she’s the better fighter but at that level, anything can happen. Like our match. That was as close AF.”

Sophie: “I’m glad to be sitting comfortably ringside this time!”

Esther: “Two rounds are in the books and we may have witness more action than expected since this second one turned into open war.”

Anna: “I’ll also venture that it’s too close to call, making it a 10-10 on my card due to the even back and forth. What do you say, Virani?”

Virani: “Anyone that expected one fighter to run away with this one will be sorely disappointed. But it’s an enthralling contest, as you might expect with fighters of this quality. I do think Chelsea needs to start taking more risks – which is always dangerous against Alesia, and I can testify myself to that. But you run the risk of going round after round with Alesia and at the end wondering why you didn’t take the chance.” 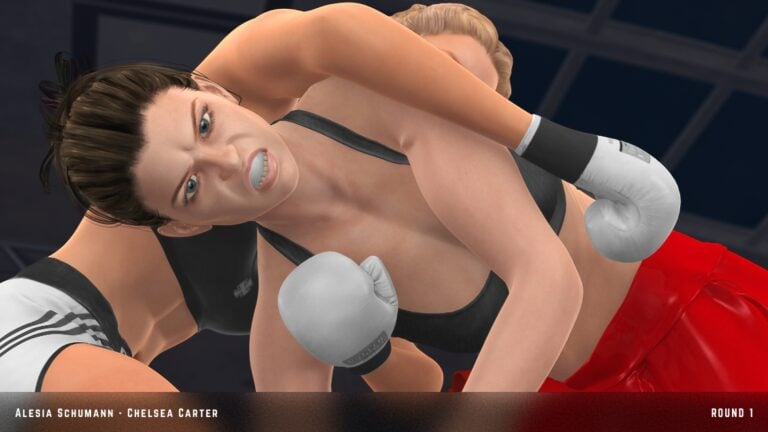 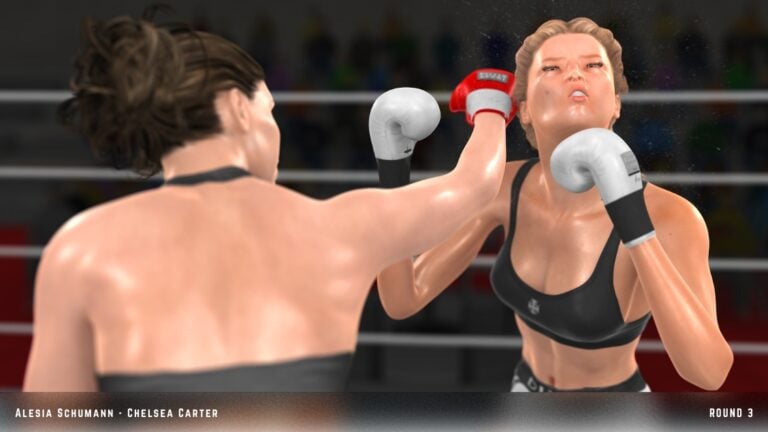