The bell rings. The two contestants get in the middle of the ring and something happens.

One look at the eagerness in Chelsea’s eyes, and another one at her gloves as she tightens the fists inside, are enough to wash away Alesia’s thought that she can turn the tables.

High Voltage maintains the mentality from Rounds 3 and 4: you can only win this fight with ruthless punching and maximum effort with the highest level of skills. Anything less would make Alesia come out on top.

“The hell with it, thinks Chelsea. Going for broke.”

A couple of fruitless exchanges take place before the eager American sends a piercing straight left in as Alesia starts sending out a jab to the body. She has the right angle to land as the German’s Philly shell opens up and as her usual speed is gone. The red glove crashes in the lower part of her face, snapping her head back in a hurry. PAFF.

The brunette already feels like a knockout is at her fingertips. She has absolutely no interest in ceding ownership of this ring and or showing restraint in the middle of a punishment session. She mixes flurries and single power shots to confuse Alesia, whose ability is diminishing by the second. That makes her vulnerable to absorb every bit of force in Chelsea’s punches, which come in too fast.

The blonde is thinking about a left hook to the body, an idea that came in without that much of a purpose, and her hand can be seen coming. That’s an easy fruit to pick for Chelsea who puts leverage behind a short right hook that connects with the Diva’s jaw. PISH. It shakes her up.

Sophie: “WHAT THE FUCK. SHE CAN’T JUST RUN RIOT LIKE THAT.”

Christine: “Come on, Chelsea! Finish it!”

Esther: “Were Rebecca Linden in this ring, she would stop the action at this point. But tonight, we have Kanti Agrawal, who is giving Schumann every chance to go for the lucky punch she needs to turn this fight around. I don’t see it coming.”

Anna: “I don’t see it happening either. Chelsea is a brutal puncher and there are only so many flush shots you can take without breaking down. This fight is Chelsea’s unless she decides to give it away.”

Alesia thinks of surviving before winning. She evades as well as she can, but every time she gets out of a possible exchange, the invader gets in her face again. There’s no escape.

With two minutes to go in the round, the Diva has to land a clean hit if only to stretch things. She opens up to throw a wild left hook. Chelsea pivots and does a complete weight transfer for a left hook that goes straight to Ally’s chin and knocks her head back. 100% of the arena’s audience is shocked by the violent impact, including Chelsea’s fans, even though they signed up with the hope that such a punch would land.

Sophie: “Fuck it. I’m not watching this anymore.”

What follows surprises absolutely no one. Alesia ate Chelsea’s power whole. Her entire body falls backwards, and she ends up flat on her back. The sound of the fall and the gasps in the crowd let the non-looking Heather and Sophie know exactly what happened.

Esther: “Schumann is DOWN for the second time of the fight! She’s now taking a majestic beating that is reminiscent of Rocky 4! This should not continue any further because it’s real life.”

Anna: “We’re not watching a 1980s Hollywood film indeed. This fight must be stopped out of concern for Alesia’s health. If she gets up and this continues, she puts herself in danger.” 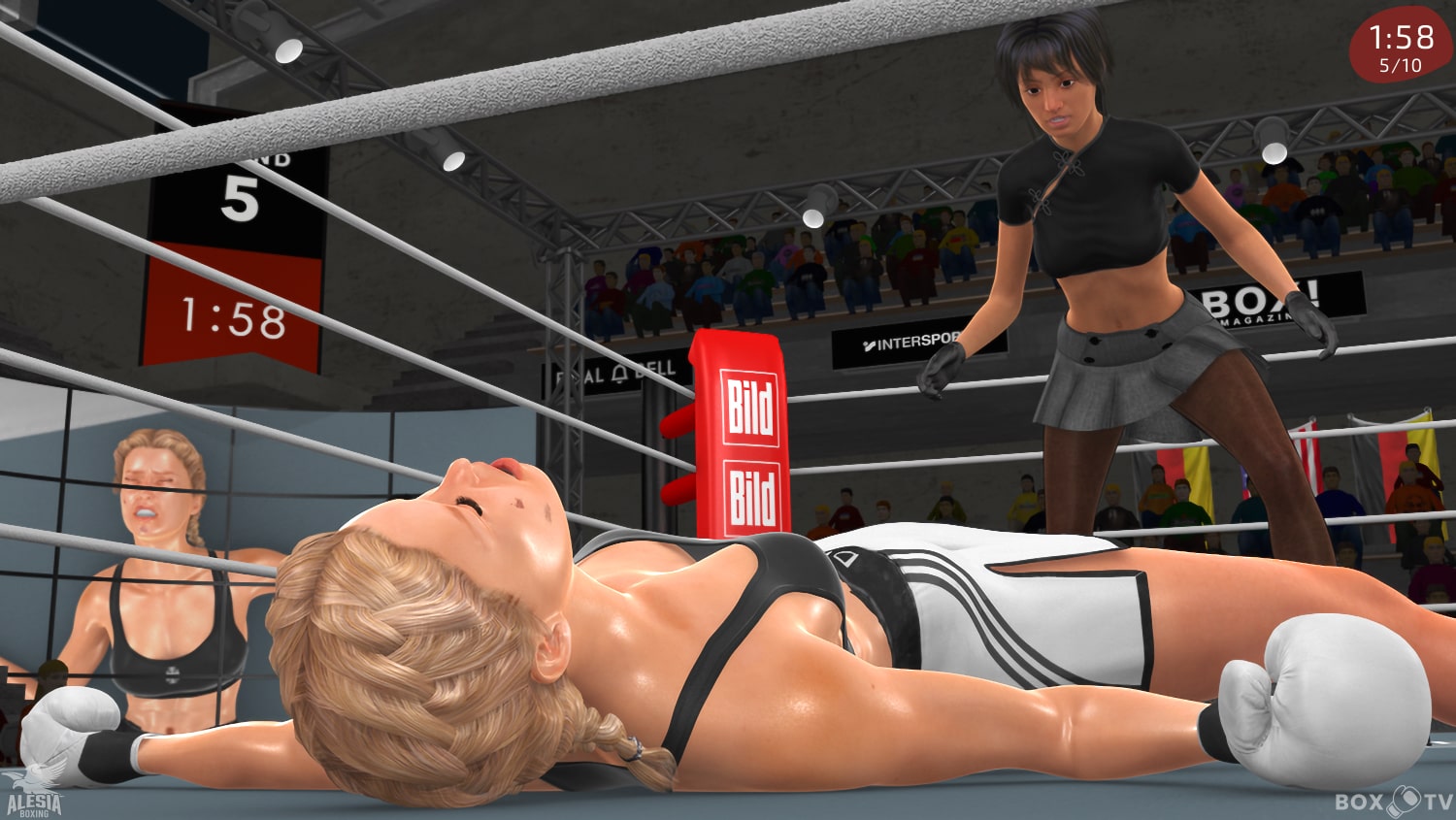 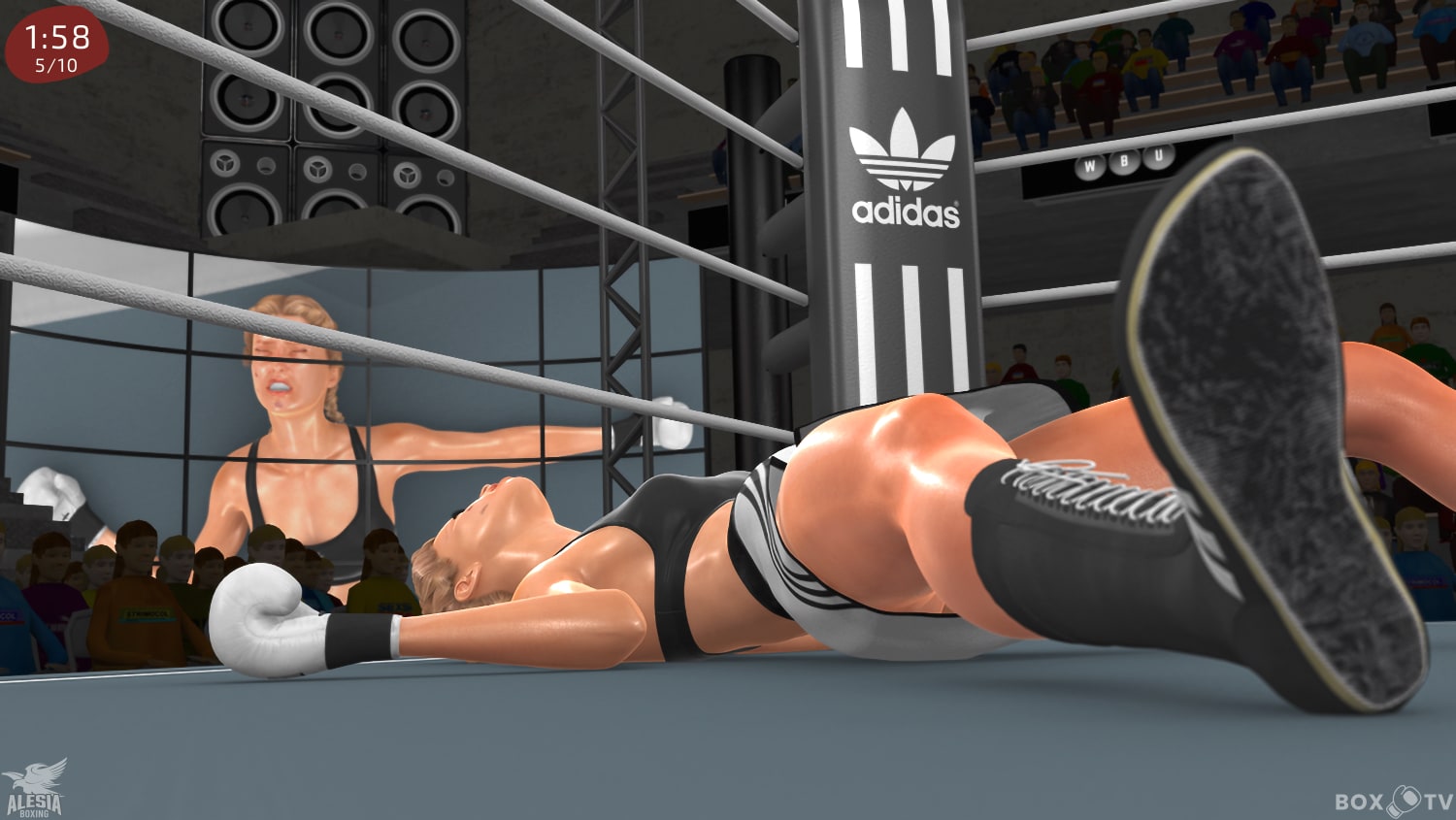 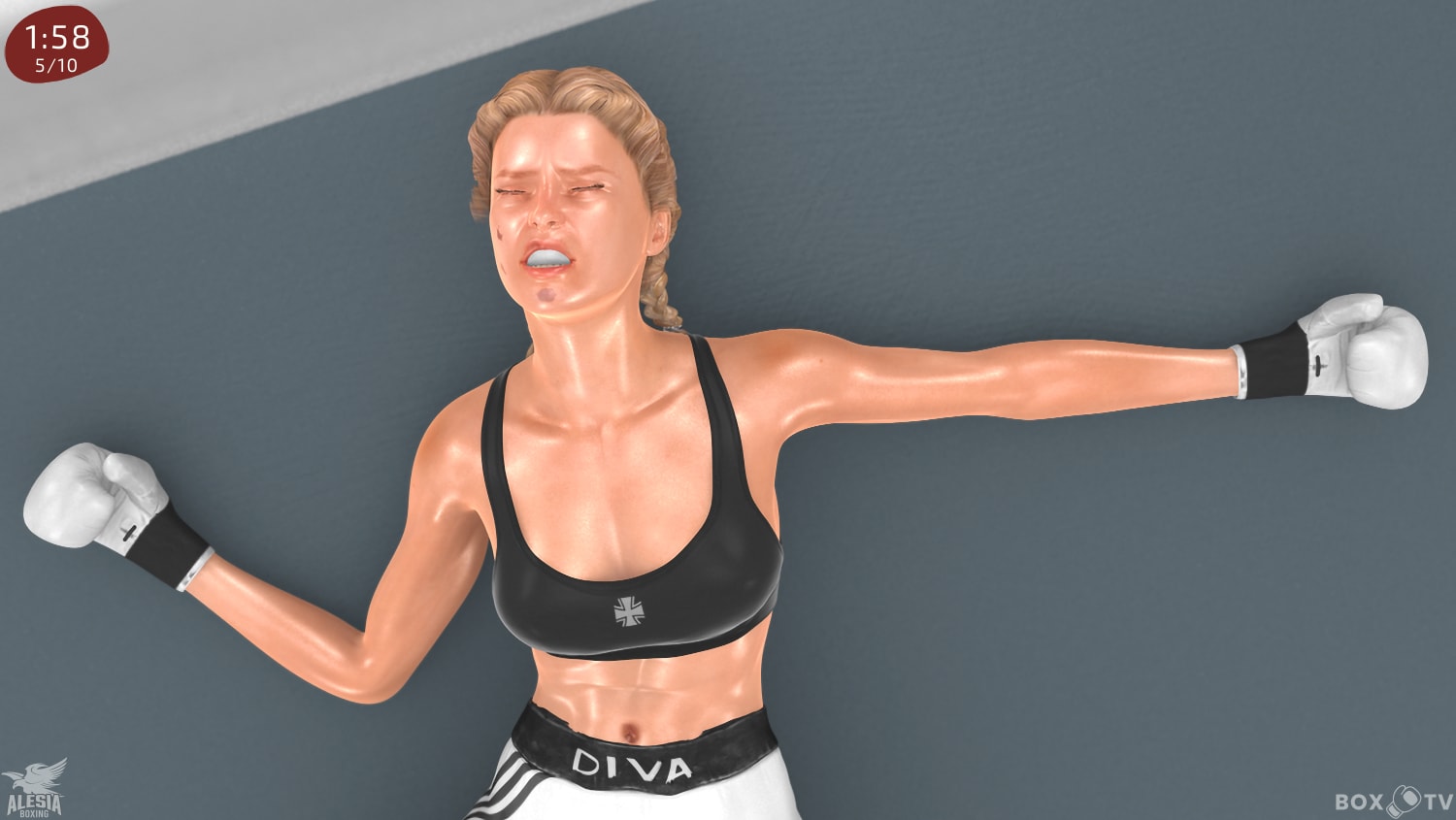 Regina doesn’t budge because she swore not to stop it, but Sophie Schumann is not bound by such an agreement. She rises from her chair and eyes the towel, with a shocked Heather realising what’s about to happen.

Sophie thinks: “I’m NOT letting my sister get slaughtered!”

Regina thinks: “She’ll stop the fight. And I’m letting her because this is right.”

Virani: “Quickly change the view because Sophie Schumann is walking towards the red corner!”

Before Kanti can decide on a course of action, Picasso grabs the towel and throws it between the ropes. A ringside official shouts about it for the referee to know.

Esther: “Alesia’s sister is calling it and the coach doesn’t protest!”

Anna: “The only decision to make at this point.”

The ref goes to pick up the towel and stand up again.

Esther: “Game over. Chelsea Carter scores a TKO against Alesia Schumann to win the Super Lightweight championship of the world. A second big upset that will make the German want to forget 2022 and perhaps redeem herself.”

Disappointment comes from the crowd, which can hardly believe that its beloved Diva lost so violently.

Among the few who have won the night are cousins who see the sweet result of a multi-year journey.

Chelsea: “I’m happy but it feels weird at the same time. Having unleashed all that hell on Ally.”

Mercedes: “I get it. Remember to treat her with respect. She didn’t have to do everythin’ she did for ya. Could have ignored ya when ya met.”

Chelsea: “Yeah. This feels so surreal.” 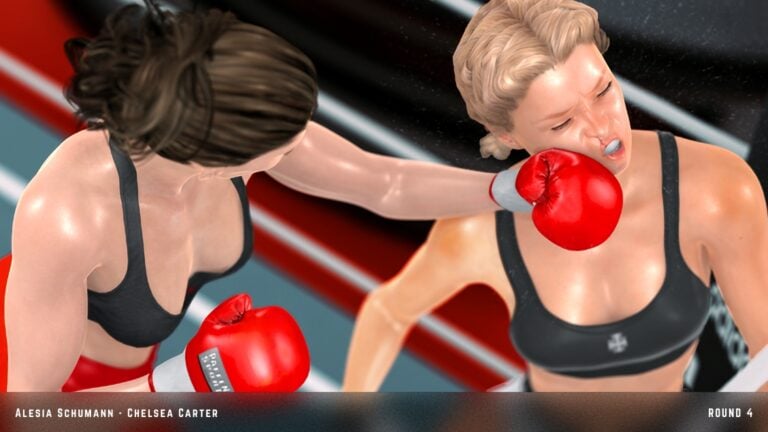 Bracing for a rematch 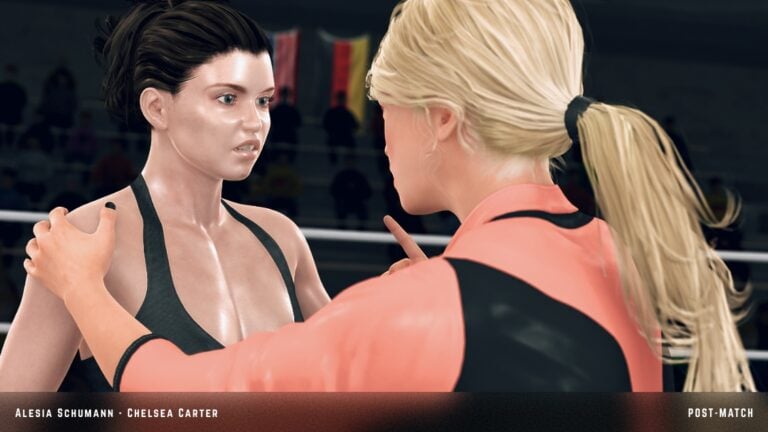