It’s tense but respectful between sluggers

We are in Bremen, Germany at the ÖVB Arena. We join the broadcast for the main event of the evening, Virani MacVicar, challenging for the world title against Michaela Sommer, broadcasted by BOX TV.

Laila: “Welcome all to the main event of the night, where Michaela Sommer will look to avenge her last professional loss and make a successful defence of her title that she won against Kayleigh Parsons in a shocking upset. We’re about to see the fighters make their entrances, so I’ll hand it over to our ring announcer for the night, Mechelle Gauthier.”

Mechelle: “Please welcome to the ring, the challenger, Virani MacVicar.”

Though she is a foreign challenger fighting a domestic champion, the crowd is appreciative of Virani MacVicar, who has fought twice in Germany and cultivated a bit of a fanbase.

The challenger walks out to the upbeat song Snakes by Miyavi & PVRIS.

Know you got my blood running

Wish I could knock your skull in

But I’m rising above it

Know you’ll crash it and burn it

God knows you didn’t earn it

My friend karma’s a bitch

Laila: “Virani MacVicar makes her second challenge for a world title, after falling short against Hee Jung Park in 2021. The Canadian is a betting underdog, but has a puncher’s chance at the very least – and she should be confident, having knocked out Michaela Sommer in their first fight.“

Mechelle: “And please welcome to the ring, your WBU Featherweight champion, MIchaela Sommer!”

The champion emerges in a fashionable black and maroon dress, the ultimate fashion accessory, the WBU Featherweight title around her waist. Her entrance song? She comes out to the same song she did in the first fight with Virani – Avenged Sevenfold’s Hail to the King. A song that has new meaning, now that Queen Kong is indeed the Queen of the division.

Hail to the King

Hail to the One

Kneel to the crown

Stand in the sun

Hail to the King

Laila: “The homecoming Queen gets a rapturous reception and she walks confidently down the ramp to the ring. Queen Kong is not acting playful tonight. She has come to fight and come to stamp her authority on the division.”

With the fighters in the ring, the attention turns to another Featherweight – Mechelle Gauthier, who gets to fire up the crowd for the main event.

Mechelle: “Ladies and gentlemen, this is the main event of the evening! 10 rounds of boxing for the WBU Featherweight title! Presented by Final Bell and Box TV, It’s time for the Queens of Leather to show down! It’s time for a fight!”

Mechelle: “Introducing first, our challenger this evening. She fights out of Toronto, Ontario, Canada. This woman comes to us with a professional record of 13 wins, 5 losses and 1 draw – with 12 of those wins coming by way of knockout! Known as the Canadian Cobra, she is coached by Sandra Blohm. Please welcome the dangerous and powerful Virani MacVicar!”

Laila: “Virani is dressed in violet tonight, in all likelyhood because it’s the colour closest to violence. This woman could have probably been a fashion model, but chose the boxing life instead. She’s a powerful puncher in her own right, but has shown susceptibility to being stopped herself, as all 5 of her losses have been by stoppage. She has shown some changes in her game since taking on Sandra Blohm as her coach, but she has a tough assignment tonight – a rare woman that hits harder than she does.”

Mechelle: “And her opponent, fighting out of the blue corner. She comes to us from Bremen, Germany with a record of 14 wins and 2 losses, with all 14 of those victories coming by way of knockout! She is the reigning and defending WBU and German Featherweight champion! Ranked by many as the hardest pound-for-pound puncher in women’s boxing, please salute your local hero, Michaela ‘Queen Kong’ Sommer!“

As expected, there’s a big ovation for the hometown girl making her first defence in her home arena.

Laila: “Sommer is popular amongst pugilist fans who salute her contribution to this violent art. 14 wins, 14 knockouts against 2 defeats tell the story. She can flatten any fighter with any punch from either hand. She is a dynamo of destruction and will be looking for her 15th professional victory, along with her 15th knockout.”

Mechelle: “And your referee for this contest will be Akane Watanabe, from Munich.”

Laila: “This will be the former highly ranked Lightweight Akane Watanabe’s first world title fight. The Japanese-German was referee that both camps felt comfortable with being in charge.”

Akane: “Alright girls. Come here. We went over the unified rules in the dressing rooms. This fight is scheduled for 10 two-minute rounds. There is no three-knockdown rule. There is no standing eight-count. You cannot be saved by the bell in any round. In case of an accidental headbutt after Round 4, we go to the scorecards. If you knock your opponent down, you have to go to a neutral corner before I start a count. If you foul intentionally, I will deduct a point. The second time, you’re disqualified. Protect yourself at all times. Obey my command at all times. Give us a good clean fight and remember that I’m the boss here. Touch gloves.”

The two boxers reach out and tap fists. There’s respect in the touch, but rivalry is about to be renewed – there’s no room for sentimentality.

At ringside, Virani has two very special guests – Emma McGale and Alesia Schumann. They have a brief chat before the match begins.

Emma: “What do you think of this?”

Alesia: “Toe to toe with Virani is dangerous because that’s where she dominates. But then, I can say the same about Michaela, who may even hit harder. If they’re well prepared, they won’t look to trade but to outsmart each other. Amazing outfits, though.”

Emma: “Wait, we’re ahead of a huge fight and you’re thinking about fashion?”

Alesia: “Yeah. I don’t see a problem with that.” 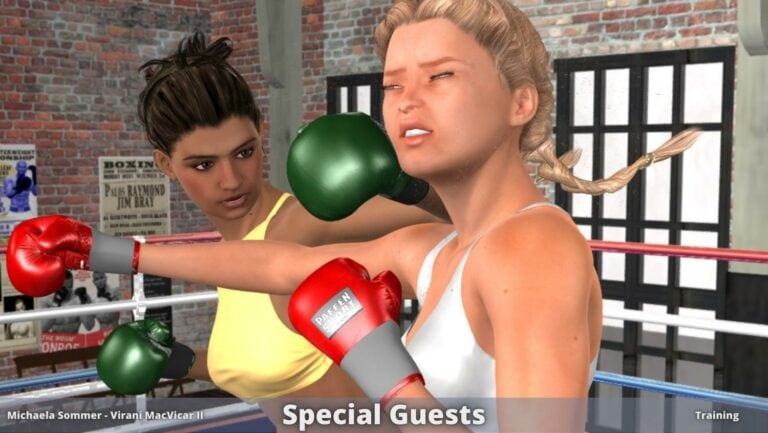 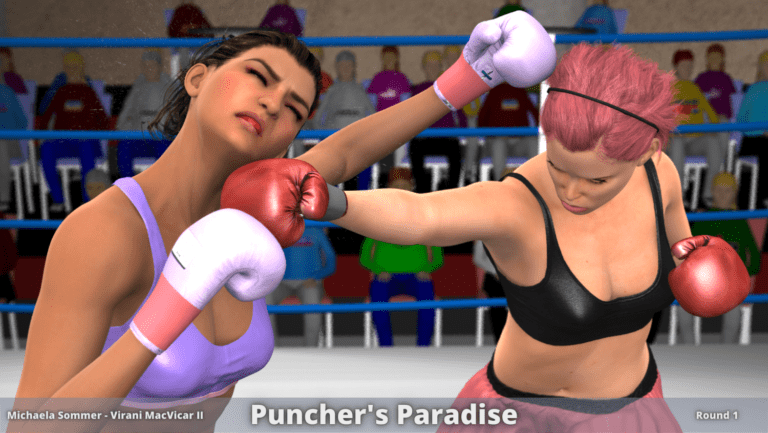