There’s a small pause, right before the bell.

The fighters look across from each other, from the woman that is keeping them from achieving their goal. For Virani, it would be a world title win, an affirmation of her talent and finally winning the ‘big’ fight. For Michaela, it’s revenge for a result she never accepted and a sign that her reign at the top may not be short lived. It’s a legacy defining fight for both.

Laila: “The WBU Featherweight title is on the line. Let’s see how these 10 rounds, or likely less, will go.”

While one might expect a calm start to a fight with such high stakes, the fight quickly proves to be the opposite, with both fighters settling into the optimum range for doing damage and swinging away. It’s not a drunken barfight, but both boxers state their intentions quite clearly to punch this one out.

The first, clean contact of the night goes to the champion, as she fires over an overhand right that lands cleanly on Virani’s jaw.

Laila: “Cleanly on target for Michaela Sommer, who will not mind the distance that this one is being fought at.”

Even though Virani has taken the first major contact of the fight, she’s not inclined to back down. The Canadian searches for her own opening, and not too long after getting caught with a powerful right hand, the Canadian is able to find Michaela’s chin with a solid left hook.

Laila: “This one is shaping up to be a short fight, if both fighters want to stay in range and go to town throwing bombs. I’d give the slight edge to the champion at this point, but if this keeps up, its going to be a matter of who is standing at the end.” 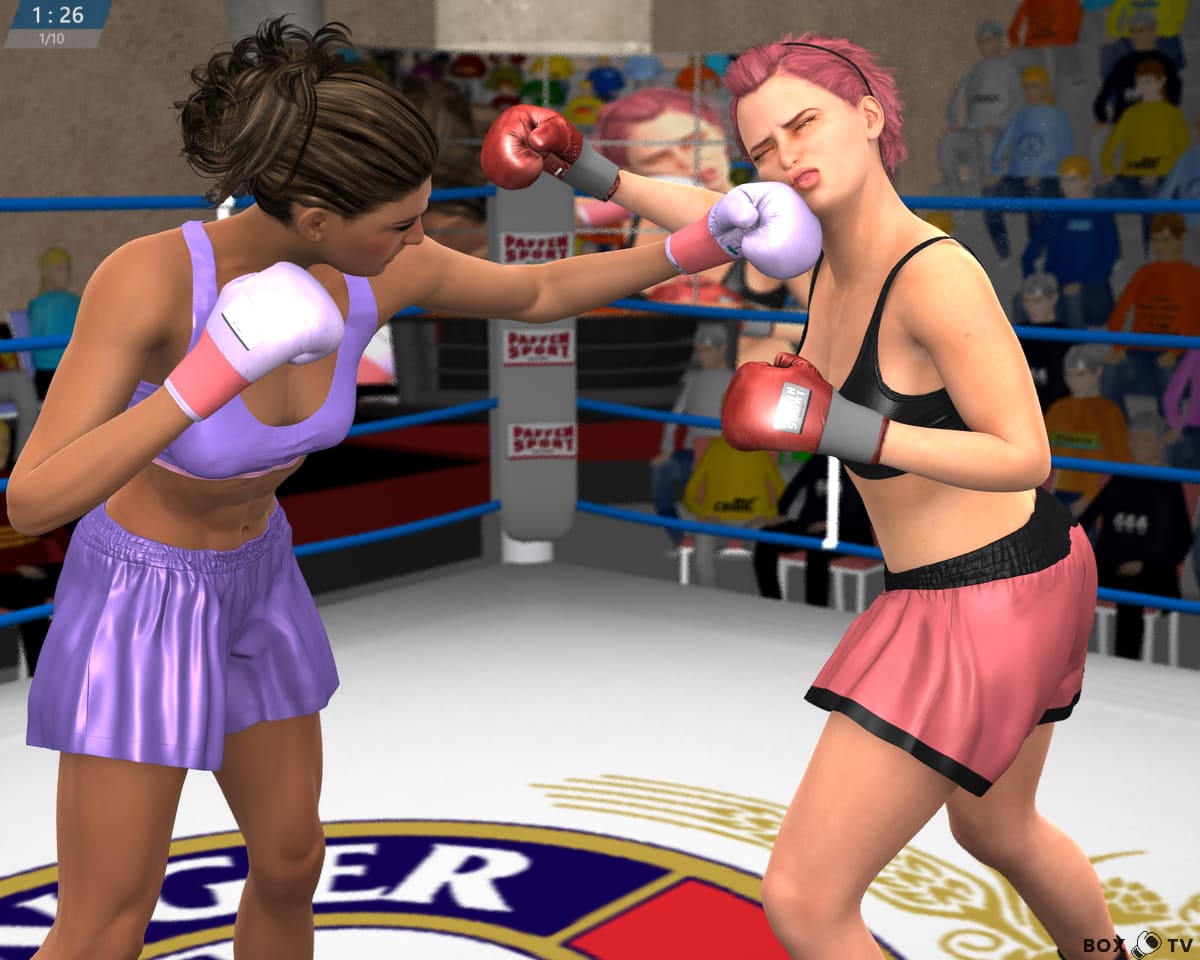 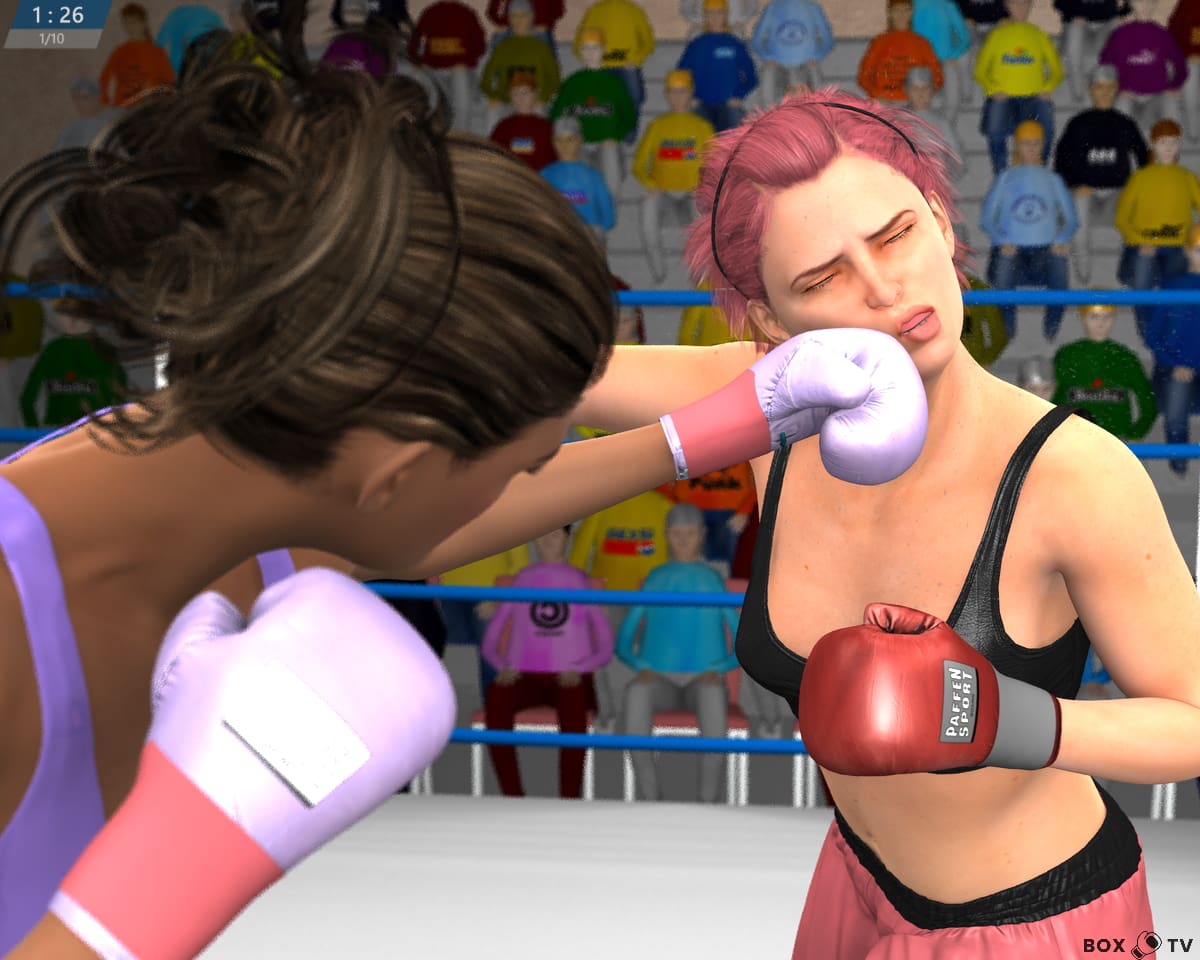 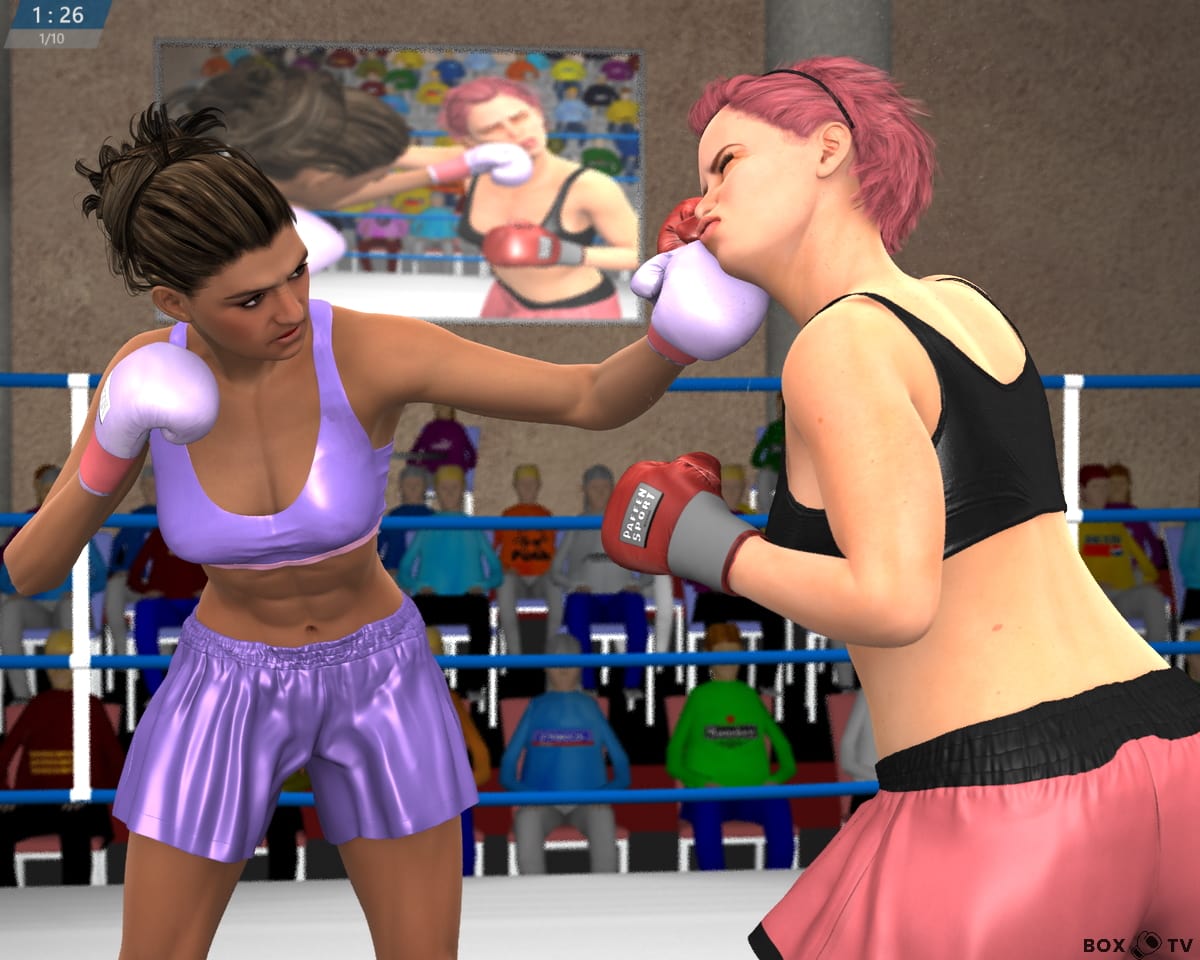 The pace can’t last forever, and eventually some boxing does occur. Virani boxes from a distance, deciding to utilize her longer reach. The Canadian jabs and pops in and out of range effectively, stymieing Michaela from working from her preferred range. It’s not what Virani really wants to do, but as a change of pace, she throws it in to not allow the champion to be comfortable.

Laila: “A good jab from Virani has dulled the pace here in the first, and it shows her evolution as a fighter. This might not be how she wants to work the whole fight, but it gives Michaela something to think about as the fight progresses.”

Working behind her reach advantage gives Virani the impetus in the round but jabs won’t do for the Canadian Cobra. She knows that this fight is one that is going to be decided by power punches. After working a jab, Virani steps in to follow up with a right hook, but it’s well ducked by Michaela who keeps her composure well under pressure.

Laila: “Though Sommer often is talked about because of her power, the champion is an accomplished boxer. One does not simply ascend to this level of champion without being able to compete in all phases of the game. Sommer knows that she has to avoid those dangerous hooks from Virani, and she does so well here.”

As the round goes onward, the natural inclinations of both fighters brings them closer together and into range where power punches are the order of the day.

The champion plays a more patient game, keeping her guard up and letting Virani try to break through. The Canadian has trouble with a tight guard, and tries to slip to her left to open up the space for a right hook. Before she can get it going though, Michaela steps into a straight right hand that catches Virani’s chin, sending the Cobra’s head jolting sideways – her intended left hook now flying wildly off target.

Michaela thinks: “That one had to hurt you.”

Laila: “Sommer shows composure to land the perfect shot at the perfect time. That was the biggest punch of the fight so far for the champion.” 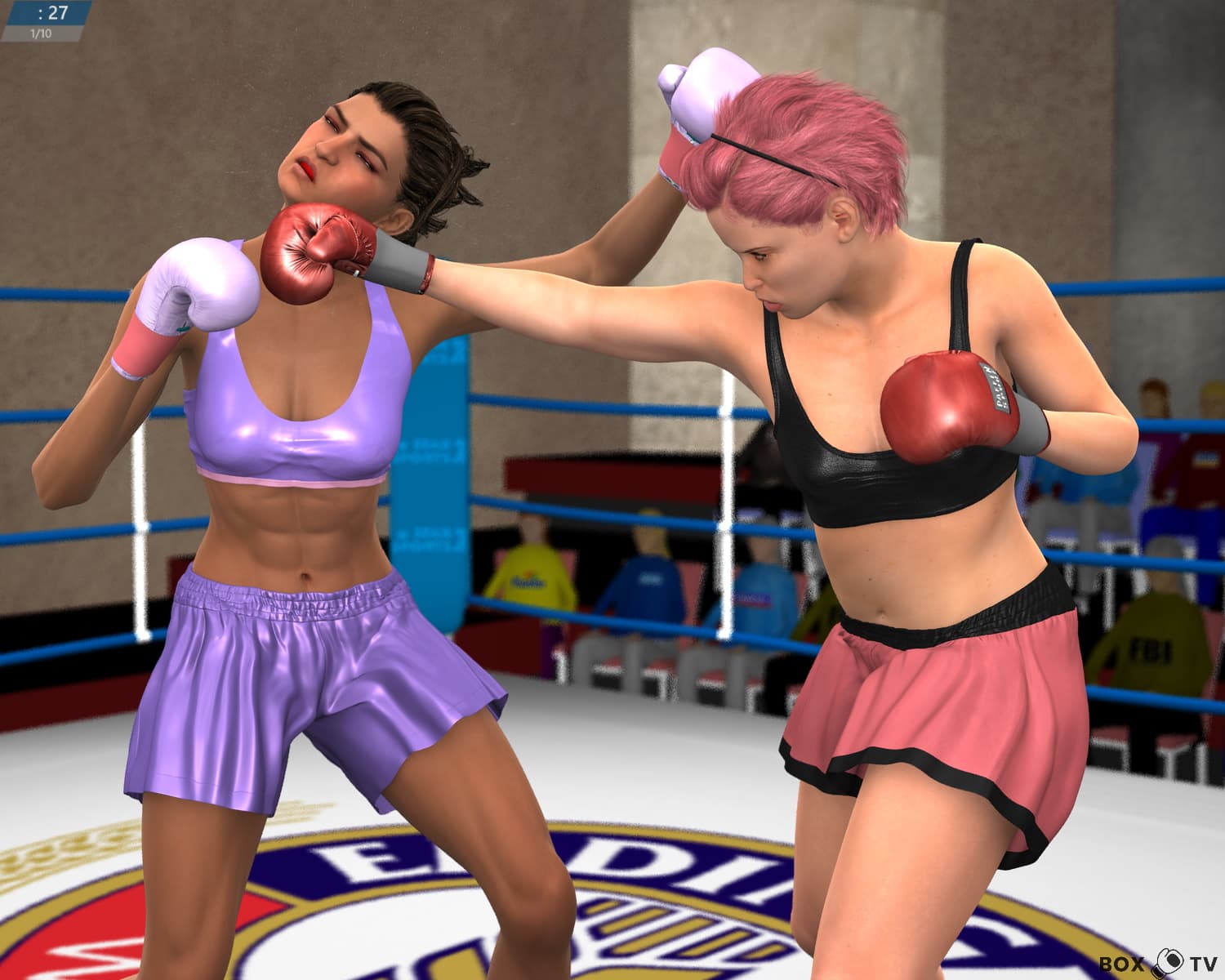 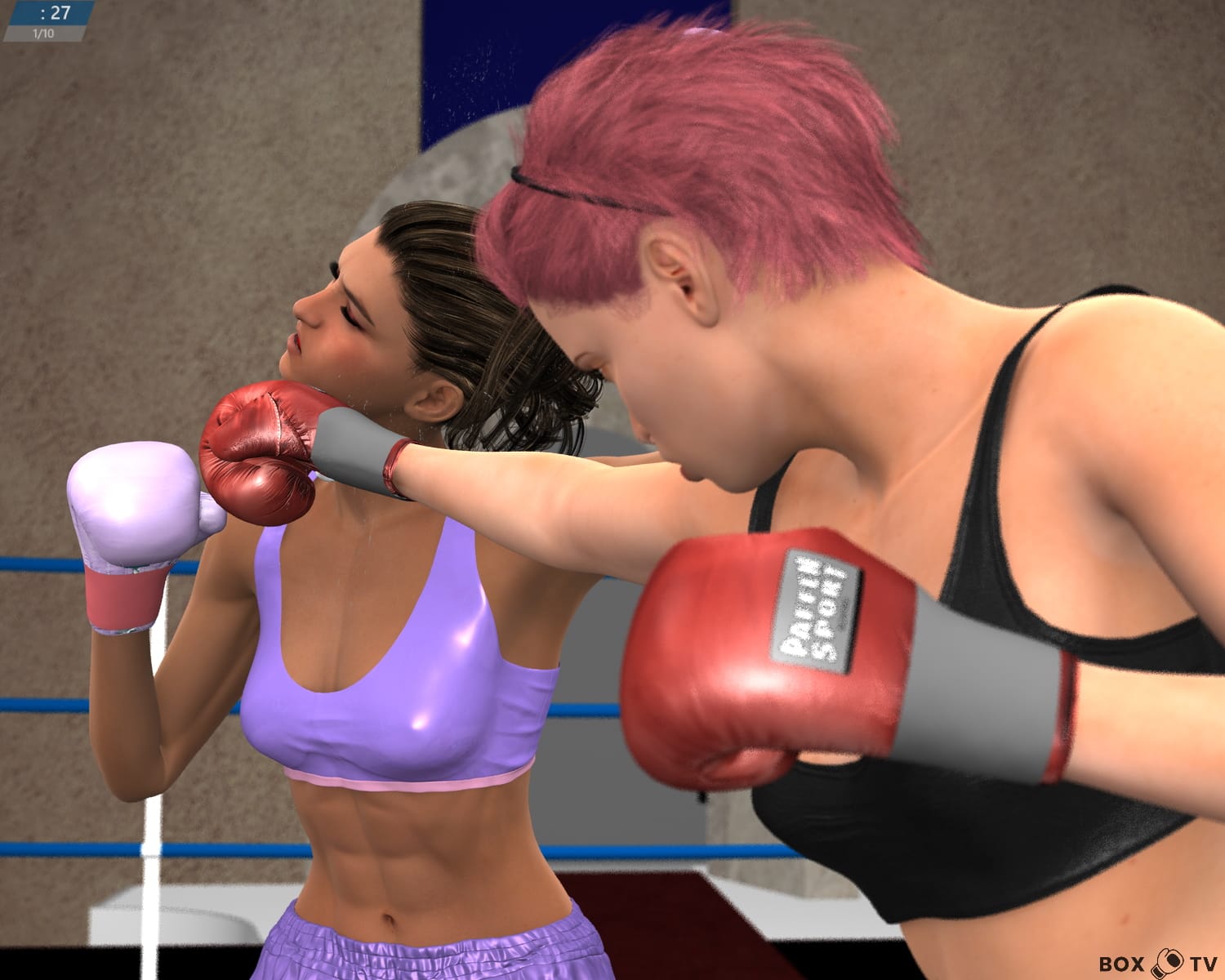 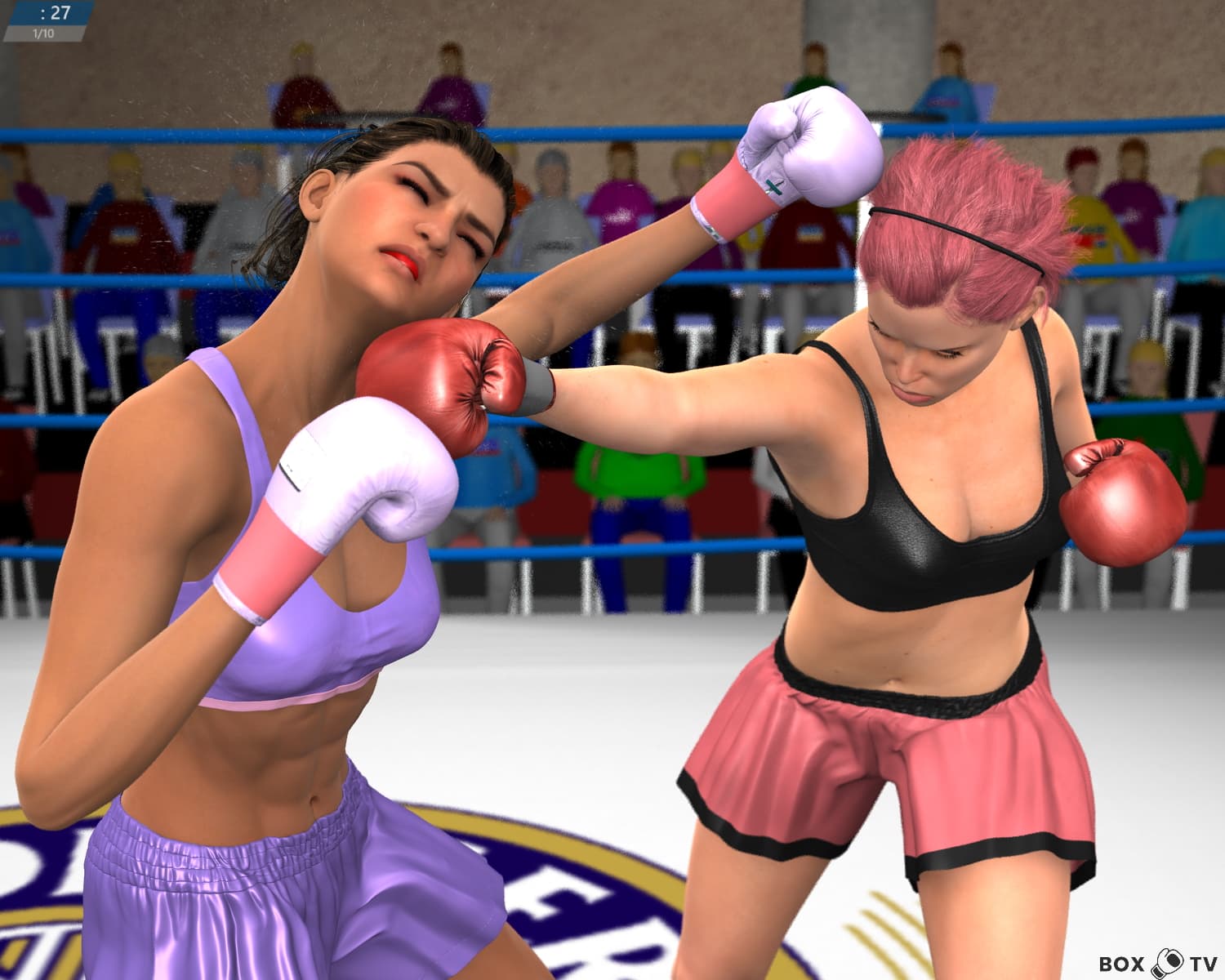 A little dazed by that strong right hand, Virani cedes the momentum to Michaela. The champion is happy enough to be the one coming forward, putting the challenger under pressure. The pressure eventually pays off when Virani tries to respond by throwing a left hook as Michaela comes in – but the champion’s unexpectedly short right hand is on target first. Another painful punch on the jaw from Queen Kong.

Laila: “This is what all fans of Sommer want to see. She’s bullying Virani around the ring and winning these exchanges – in fact she’s not even letting Virani reply, so it’s more of a one sided exchange – like talking to your mother!” 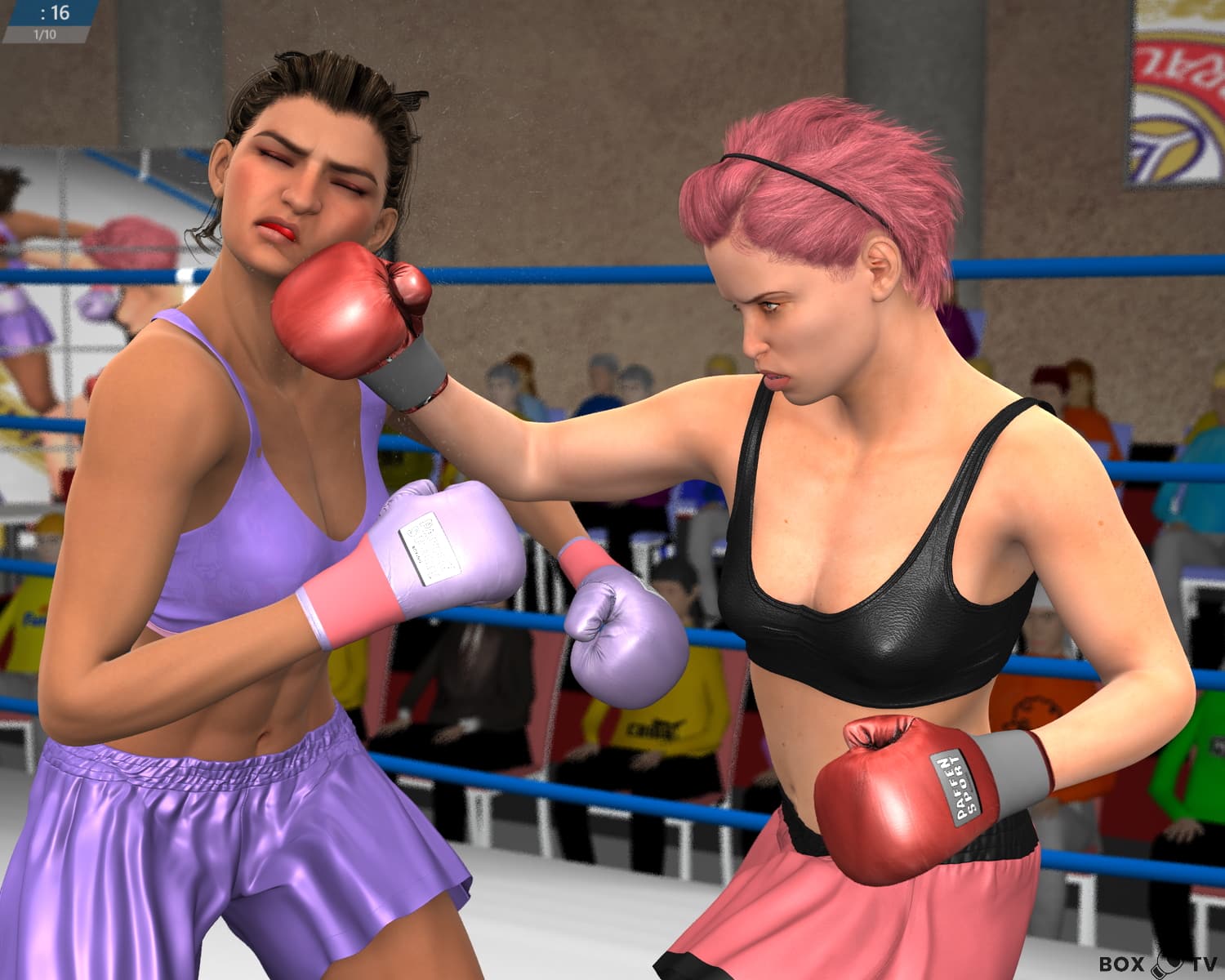 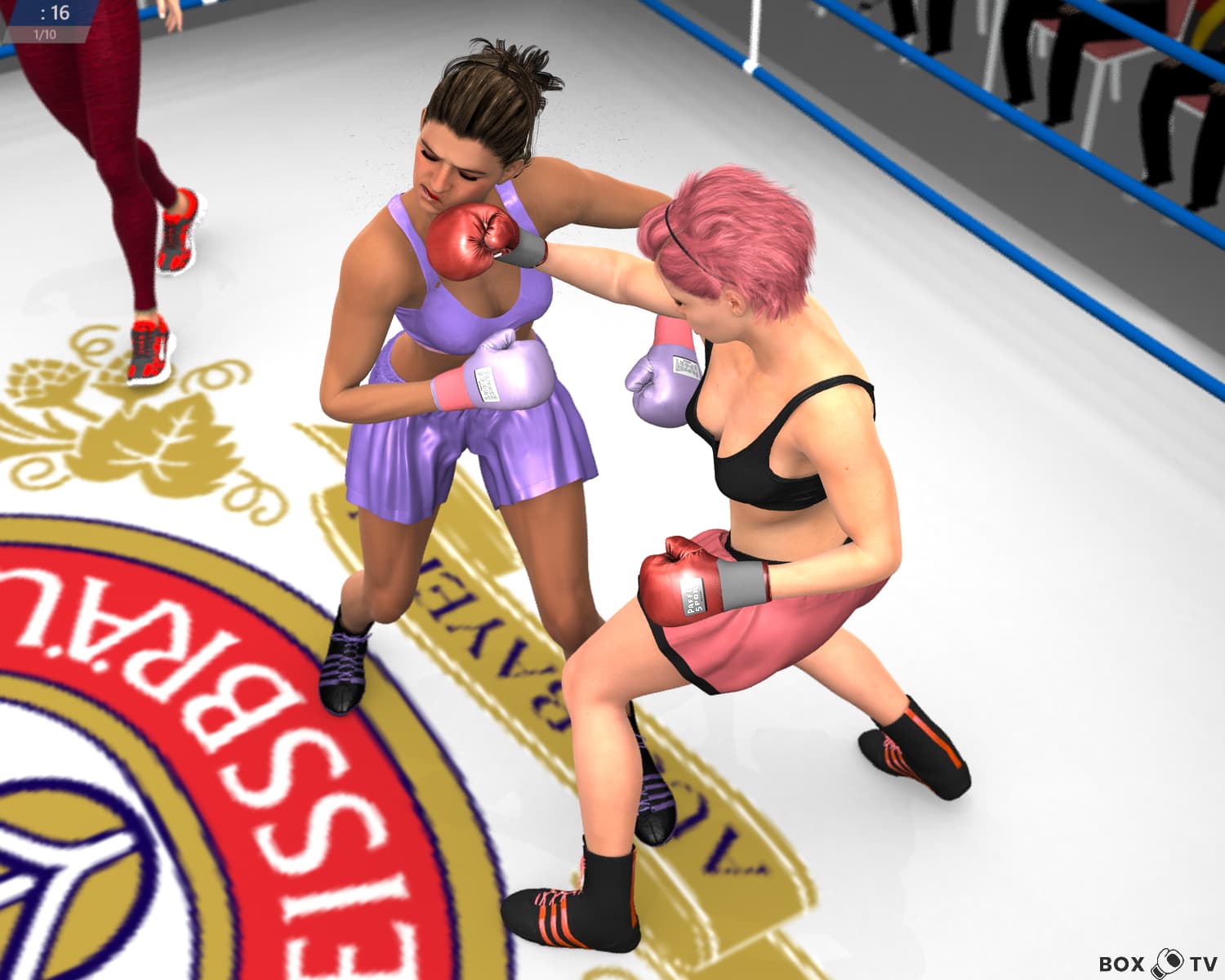 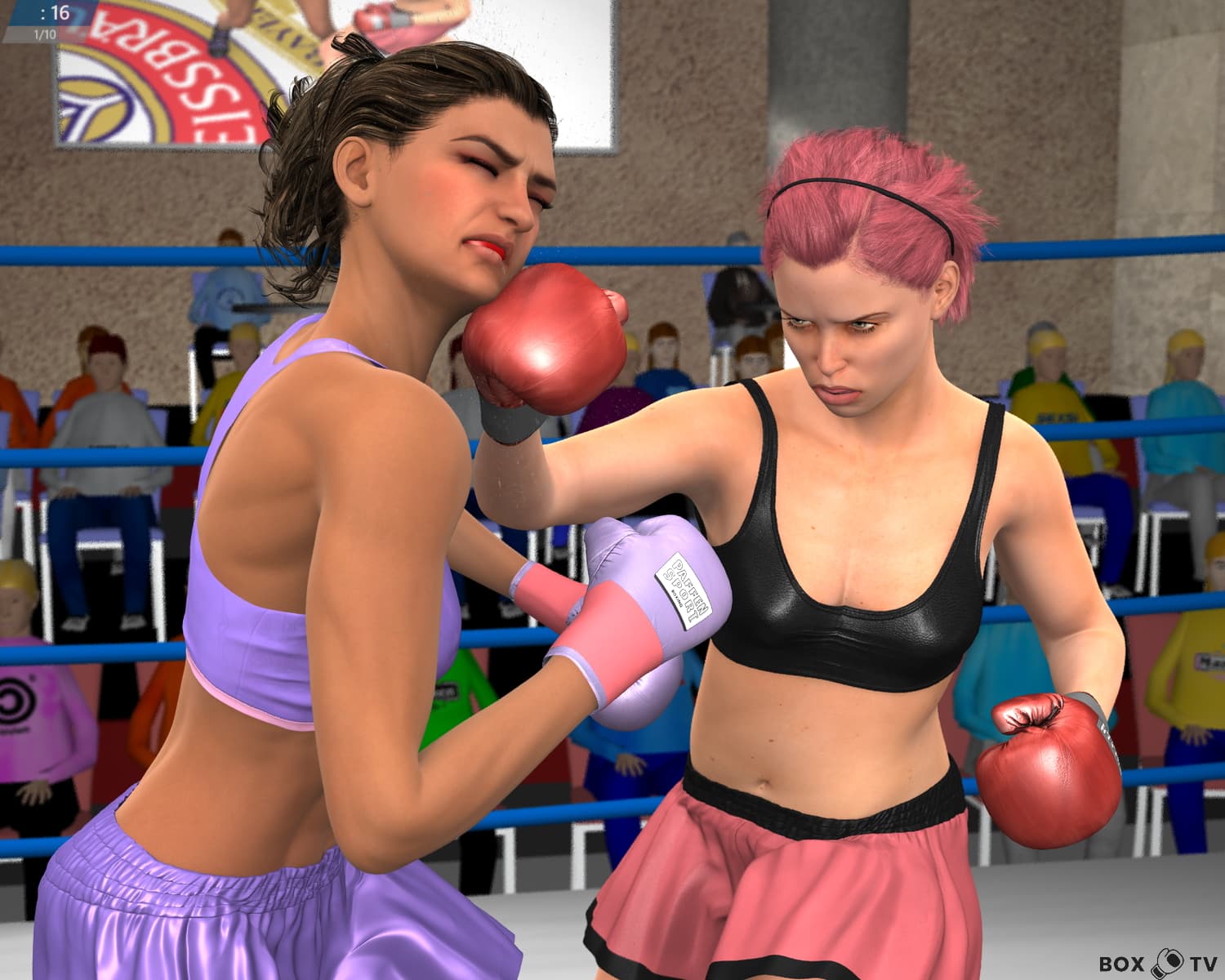 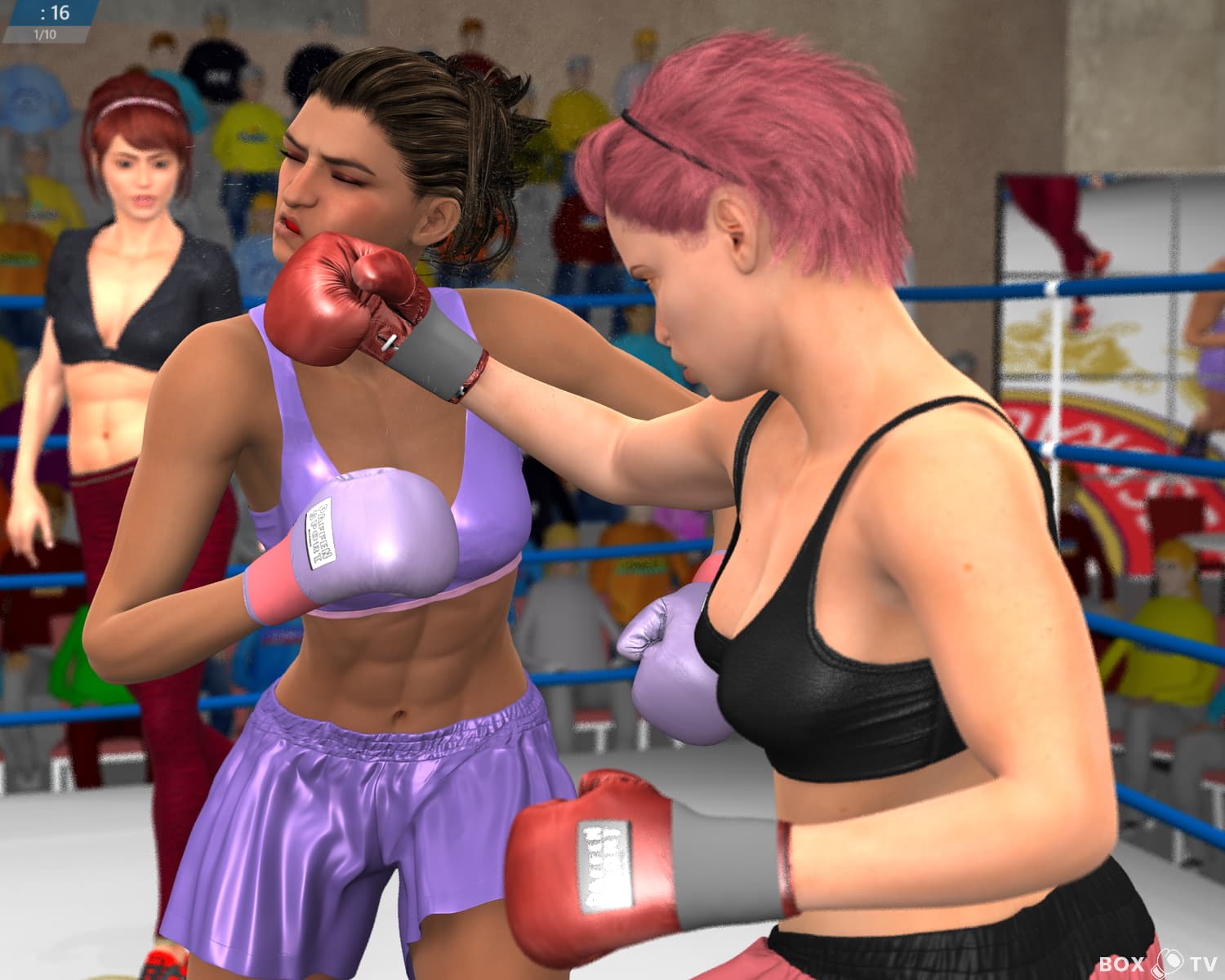 Buzzed by those two right hands, Virani turns into a defensive Cobra, wanting very much to avoid the fate of Kayleigh Parsons and losing in the first round to the hard punching Michaela. Virani uses her legs to get away and avoid getting into further exchanges of leather with Queen Kong.

The crowd loves the fact that the challenger is backing up early in the fight and it spurs Michaela to come forward, even when she should be a bit careful of Virani’s possible reply.

Towards the end of the round Virani is in full retreat, and she has to perform some emergency actions – leaning backwards to prevent another fierce right hand from Michaela landing. It’s not textbook defence, but it works.

Laila: “A dominant round for the champion ends with her having the challenger on the run! Sommer forced MacVicar out of her comfort zone and took the round easily.”

It’s time for a chat with the coaches!

Axel: “Good round, die Meisterin. This is what I want from you. Make sure every time she comes into range, she pays for it. She won’t take it for very long.”

Michaela: “More of the same? I’ll be happy to give it to her.”

Axel: “Don’t neglect the defence, though. You slowed her down when you used the high guard. You can mix it up and keep her off guard.”

Sandra: “How are you after that one?”

Virani: “I forgot she hits like a steel hammer.”

Sandra: “Two phases of play. Use the jab to keep her away, even when you want to take a breather. Putting the guard up only invites pressure, and we don’t really want to trade with her. Only unequal trades.”

Sandra: “Nerd. But yes. Keep calm, it’s a long fight, and she’ll give you chances.”

Alesia: “Tell me what a boxing nerd thinks.”

Emma: “Tough one for Virani. This Michaela chick doesn’t just hit hard. She moves and times shots well. It’s dangerous to get anywhere close. Didn’t you guys work on handling that?”

Alesia: “We did, with a focus on the setting traps and setting up the counter. It feels like Michaela played that game in this round. I sparred with her before. She sucks up knowledge like a sponge and improves very quickly.”

Emma: “I may need you to be a bit more comforting than that.”

Alesia: “Did I mention how good Virani looks in that outfit?”

Emma: “You did that last round.” 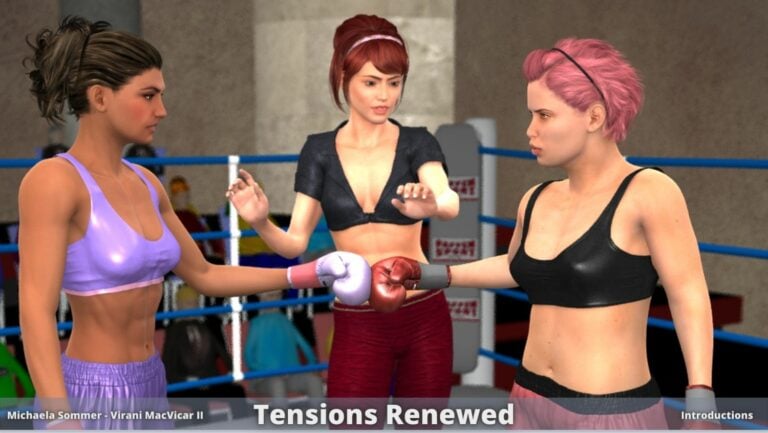 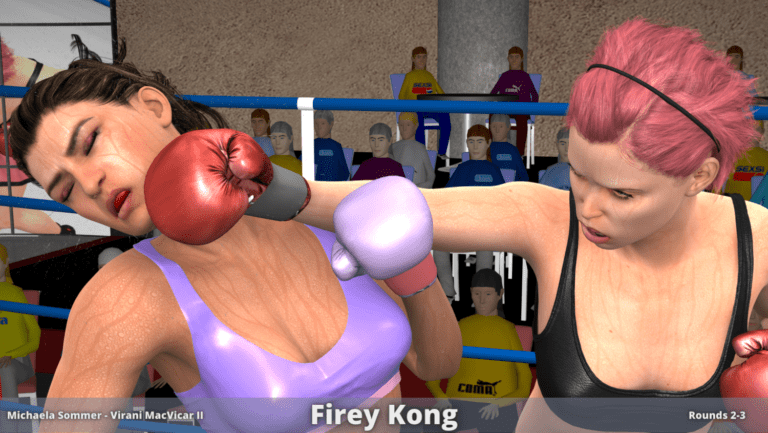