With the action over, Regina, Kanti and the ring doctor rush to the defeated fighter. They take Alesia back to her corner and make her sit down.

Doctor: “Tell me how you’re feeling.”

Doctor: “Now follow my finger as I move my hand.” 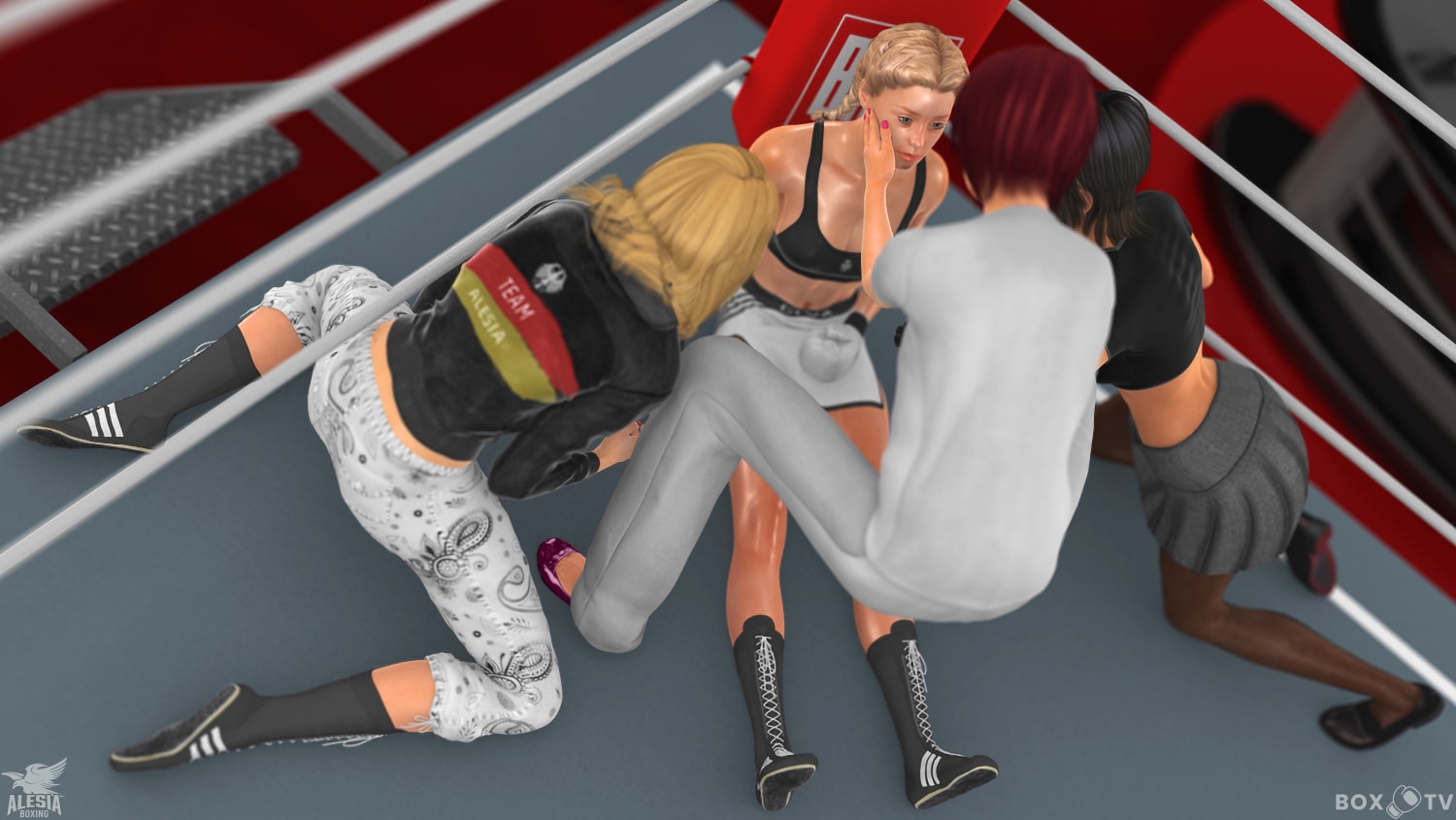 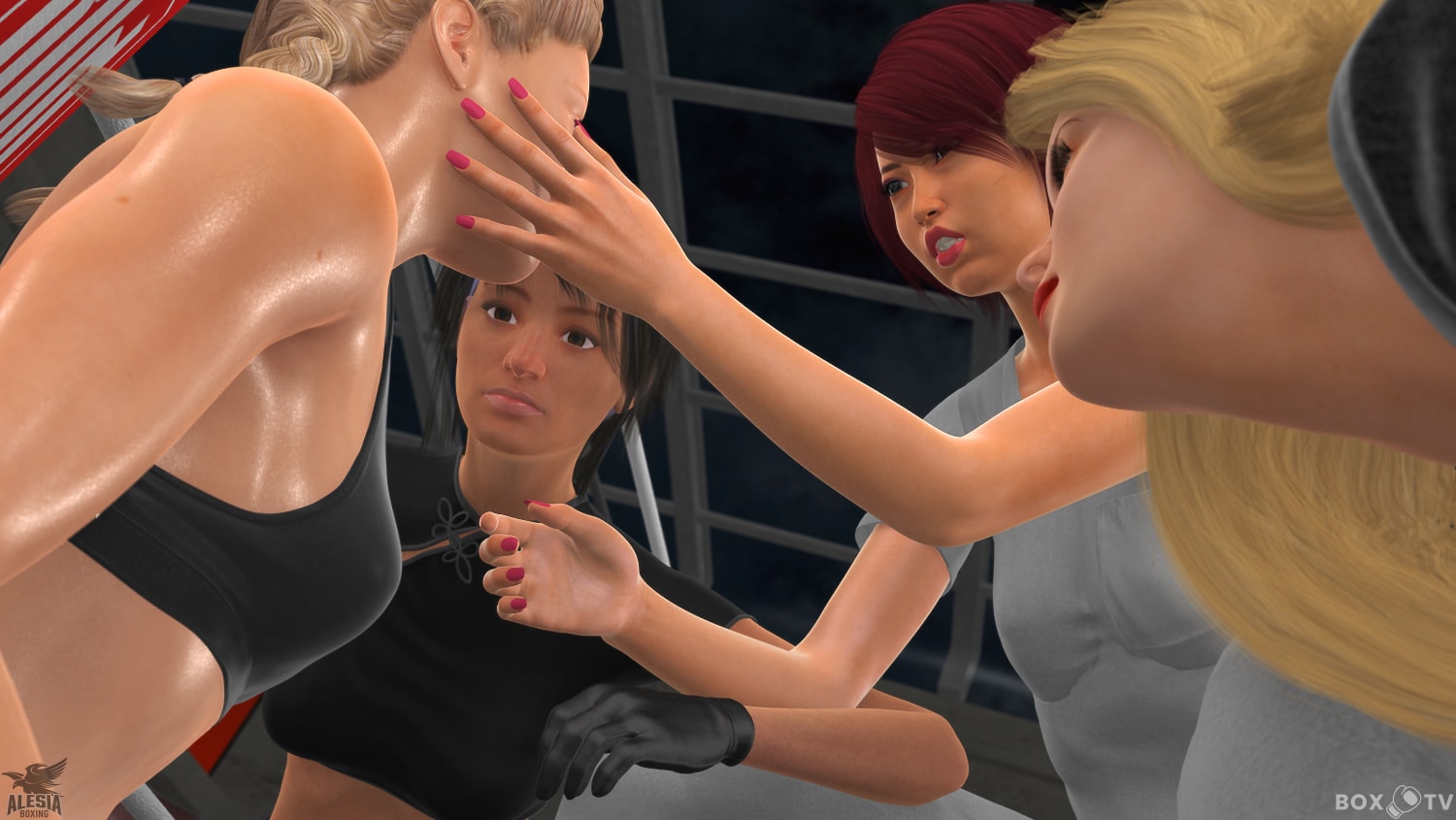 Chelsea wants to come over to have a look at the Diva but family pops in her face.

Sophie: “Wait a few minutes. She needs time to recover.”

Chelsea is surprised and frustrated. “Says who?”

High Voltage wants to step around Sophie to go to Alesia, but the young blonde gets back in her face. “Last warning. Then there’s a second fight and you’re getting KTFO.”

Heather: “Pipe down, Chelsea. It’s not that hard to wait a little and you don’t want to peeve Sophie.”

Chelsea reluctantly backs away to her corner. “Fine. Geez. I really care about her. This is my friend.”

Sophie: “And my sister. You’re always second to me.”

Mercedes: “They’re right. Ya can wait.”

Alesia gets back to her feet and gets a round of applause. Sophie gives Chelsea the green light to come over. The two boxers don’t really have much to say. A light hug suffices to signal an end to tonight’s hostilities. 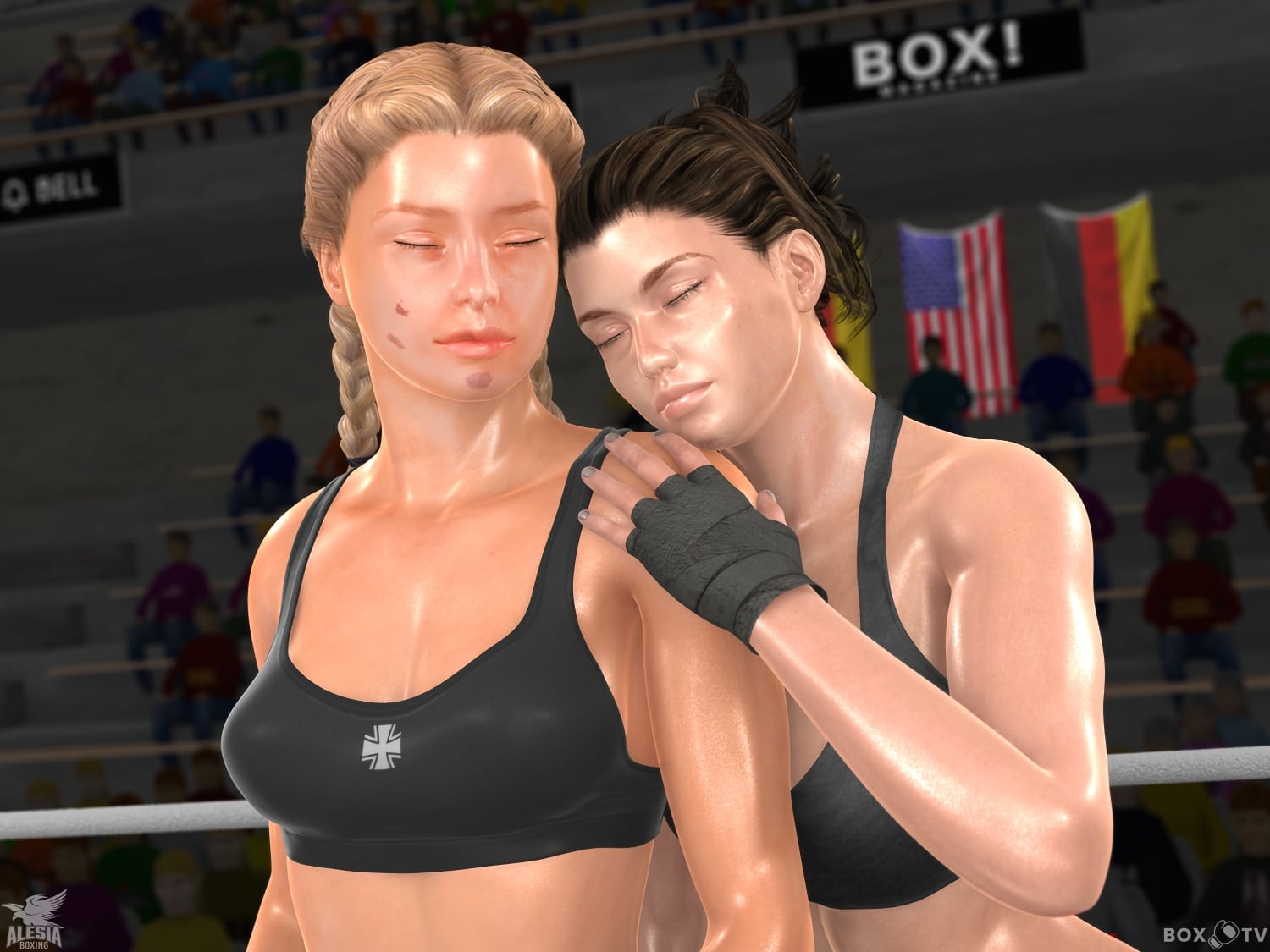 A few minutes later, Mercedes receives the belt and puts it on Chelsea’s waist ahead of the official announcement.

Veronica: “Ladies and gentlemen, we have a winner by technical knockout at 1:52 in Round number five… and NEW Super Lightweight champion of the world… from San Francisco… Chelsea ‘High Voltage’ Carrrterrrrrr.”

The new champ gets a polite round of applause. The strong performance she just gave has to be acknowledged. 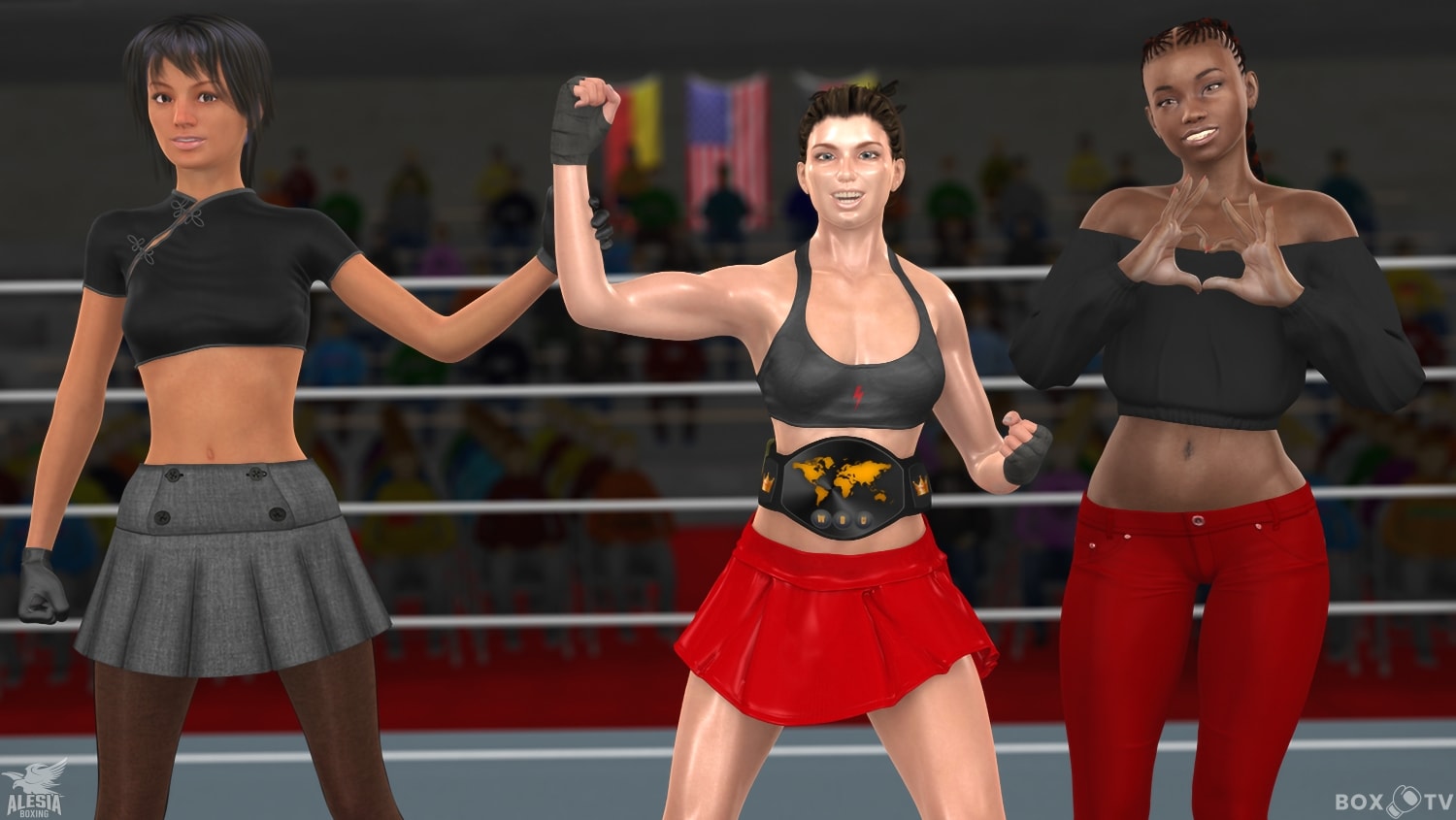 Was it too easy?

Esther gets in the middle of the ring for interviews. Dutch bluntness is on the menu.

Esther: “Congratulations, Chelsea. The biggest win and knockout of your career. Now a world champion. What do you make of Sophie Schumann throwing in the towel?”

Chelsea: “Thank you. Not sure what happened in the corner but I was having my way and knocking Alesia down repeatedly. She wasn’t coming back. I agree with the stoppage.”

Esther: “Did you get Alesia at her best, though, or did you get an easy ride because she folded?”

The American’s eyes widen and her jaw drops at the uncomfortable and very journalistic question.

Chelsea: “What the hell?”

Esther: “You heard the question.”

Chelsea: “She didn’t come here unprepared and she didn’t fold. I bent a future Hall of Fame member to my will.”

Esther: “I’m asking for your opinion. Do you think that Alesia gave you her best, as she did against Anastasia Orlova, Taylor Grant, Virani MacVicar and Chloé Potvin? Or did she fail to show up?”

Chelsea: “Who the fuck are you to ask that?”

Esther: “When I started boxing, you were learning how to spell. I won four more world titles than you did. I know a thing or two about this sport and I’m asking you a question.”

That one is followed by murmurs.

Chelsea: “What do you want me to say? That Alesia was damaged goods when getting into the ring or that she let me beat her? No fucking way. Look at how she trashed Melanie Spitzer, a hell of a fighter, earlier this year. Ally is amazing but I beat her. You brought up Chloé Potvin. She couldn’t knock her out but I did.”

Esther: “Then tell us why you think you won tonight.”

Chelsea: “I punched too hard and I punched too fast. When I started landing clean in Round 3, I felt how I was hurting her with every punch. My hands felt hard contact inside the small gloves and they’re still aching a little. Replay the video if you like; the sound of punches landing was brutal and I was right there to feel everything. When I looked her in the eye at the beginning of Round 5? I saw defeat. Replay the match anytime you like. You’ll see everything.”

Esther: “Will you take the rematch?”

Chelsea: “I don’t want it and say that she shouldn’t ask for it. You’ve seen how I can mess up any fighter, even at the highest level. I rank Ally as one of the best boxers I’ve ever watched and here we are. I’ve done it.”

Esther: “Thank you. Regina Halmich. Tell me: why did this happen? Your fighter got beaten squarely and it took Sophie Schumann’s intervention to end it. Was she ready?”

Regina: “Look. I don’t feel like taking credit away from Chelsea here. Her coach figured out the way to win, she delivered with a fantastic work rate and it is tonight’s headline. Yes, Alesia wanted to continue and I found out how hard it is to go against your fighter’s will in the thick of the action. I endorse Sophie’s decision, though. Stopping it was correct.”

Chelsea thinks: “She’s deflecting it. Nice of her, but what about Esther’s point?”

Esther: “What we want to know is: did your fighter box the way she can and did you provide her the right direction?”

Regina: “Chelsea won because her coach figured out how to defeat our style. She did the job. I already know what to change for the rematch but I’m not telling anyone except Alesia, in training camp. All you need to know is that we’ll adjust and win.”

Chelsea: “Wait, you’re asking for a rematch after this beating?”

Esther: “This isn’t your interview. Step back.”

By now, Regina is boiling inside but hiding it.

Regina: “There is a rematch clause for both camps in the contract and we will trigger it on Monday, for a fight next year. This is no surprise. We had a full read-through of the contract together before signing it. Chelsea knew what she was getting.”

Esther: “Alesia’s been knocked out cold in sparring by Emma McGale. Stopped by Steffi Slater. Stopped again by Chelsea Carter. All in the space of a few months. How much does she have left in the tank?”

Regina: “A lot more than you assume. Many legends had setbacks because they faced quality instead of being protected. I came back to boxing to coach her and I’ll make it a personal mission to take her to the next level.”

That gets cheers from the crowd.

Deathly silence hangs over the dressing room as Alesia comes back, freshly showered. Heather and Sophie haven’t spoken since getting in.

Alesia: “I need to understand. Sis, why did you stop it?”

Sophie: “Because I didn’t want this fight to end up in a depressing documentary.”

Sophie: “Accept my decision. You’ll get nothing but love if you get mad at me anyway.”

The older sister gets close and gives her junior a peck on the cheek. “Hating Sophie Schumann is a difficult task.”

Heather and Regina crack up.

Alesia: “I was well prepared. How did she beat me? How do I win a rematch? I want it, but I don’t know how.”

Everyone perks up to listen as Regina opens her mouth.

Regina: “It wasn’t possible to adjust to that crazy work rate and switch hitting in the middle of a match. We’ll have to make major changes when the time comes.”

Regina: “You need rest and perspective. Sophie and Heather: you’re taking it from here. Ally needs your company and Anna’s.”

Heather shoots them an inquisitive look as the coach walks out. “Any idea what she has up her sleeve?”

Sophie: “Can’t be sure but I think she’ll rip a few pages off their book. Let’s get Anna.”

Sophie and Heather watch as a fourth person tip toes while entering the room.

The Diva grants an audience but without patience.

Chelsea: “Esther’s questions are bothering me. Did you give me your best?”

Alesia: “Yes. Congrats on winning. You had me.”

Chelsea: “Ally… that win was as clean as it gets. We don’t need to go to war a second time. I cheered for you as world champion. You can do the same for me.”

Chelsea: “Not a chance…”

Heather gets between them. “Enough. Leave her alone.”

The brunette doesn’t intend to resist the White Swan’s intervention but she doesn’t budge, just to see if she means it.

Heather: “Now’s a great time to shut the fuck up, though.”

The Canadian puts a hand on the American’s mouth and manhandles her out of the room, to the amusement of the others.

While this happens behind the scenes, Anna Schwartz is closing the show on the air.

Anna: “What we have seen tonight was a friendship turning into a rivalry. The student beat the teacher, who believes enough in herself to want a rematch despite getting stopped. Alesia Schumann probably faced the best opponent in her career and may have to jump over a high hurdle to claim victory over Chelsea Carter in the coming year. So long from Berlin.” 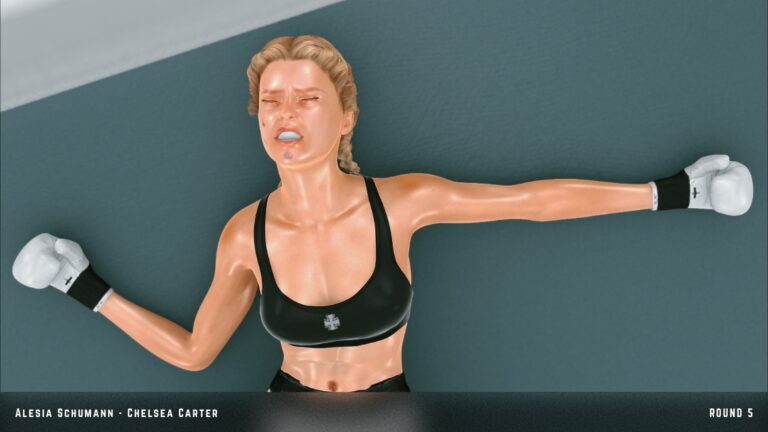