Let’s drop in at Halmich Academy in Munich. A prime fighter’s decision is about to ruffle feathers quite a bit.

Sophie Schumann is accompanied by Leonie von Hammerstein, who got knocked out by Astrid Olsson in a pro debut. A rough experience that led to her presence in the gym this Monday afternoon.

The head coach gets in minutes later and walks to the pair.

Sophie: “What a fine observation.”

The guest has to poker face to avoid laughing at the sarcasm, which makes the boss squint her eyes a little.

The top Lightweight fighter makes an announcement with a matter-of-fact tone. “Leonie is my guest for the week. She’s staying at my place. We’ll work together, hang out. I like her.”

Sophie: “With Leonie. A transparent discussion.”

The boxing legend knows that this will be difficult. She sighs and accepts. 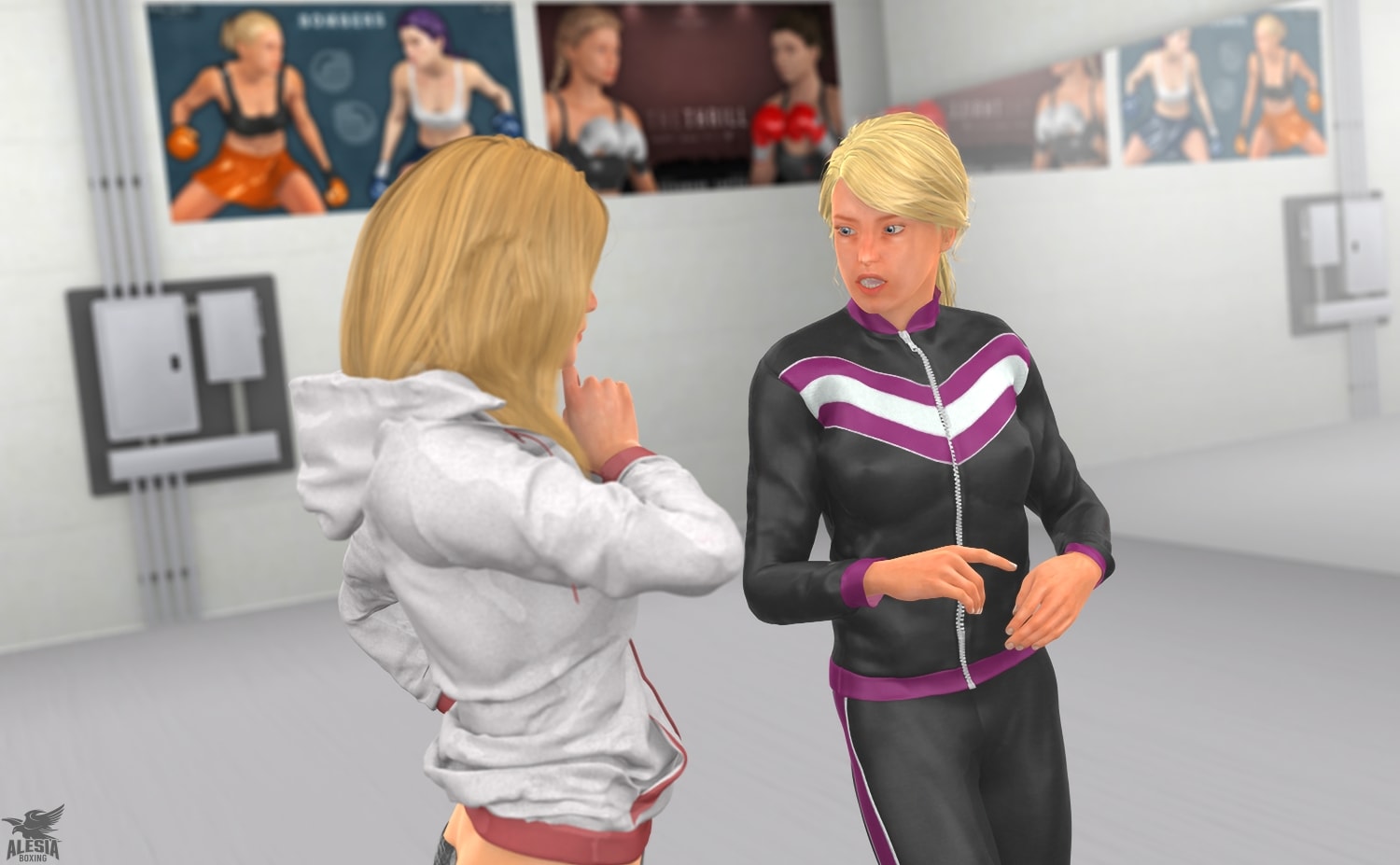 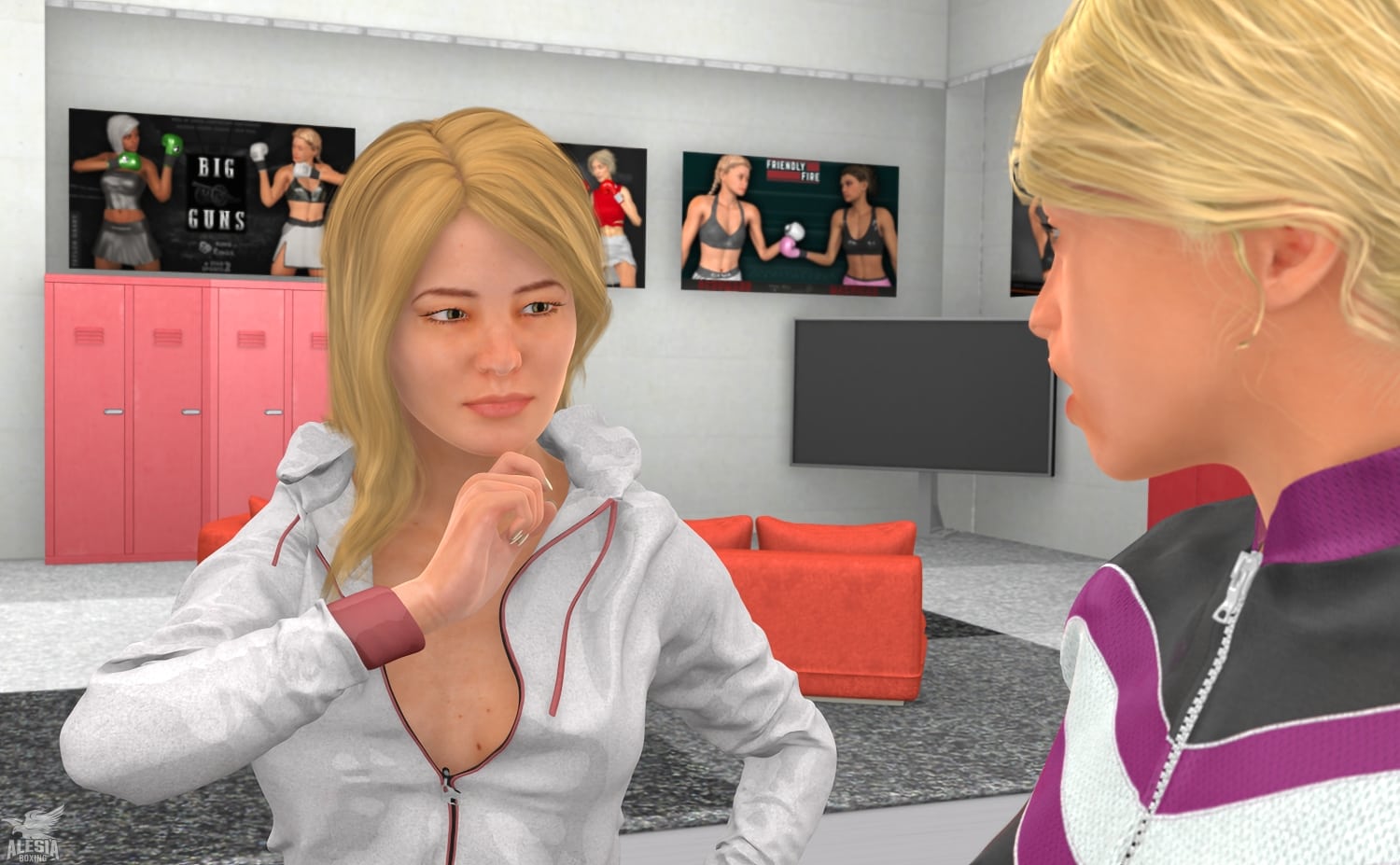 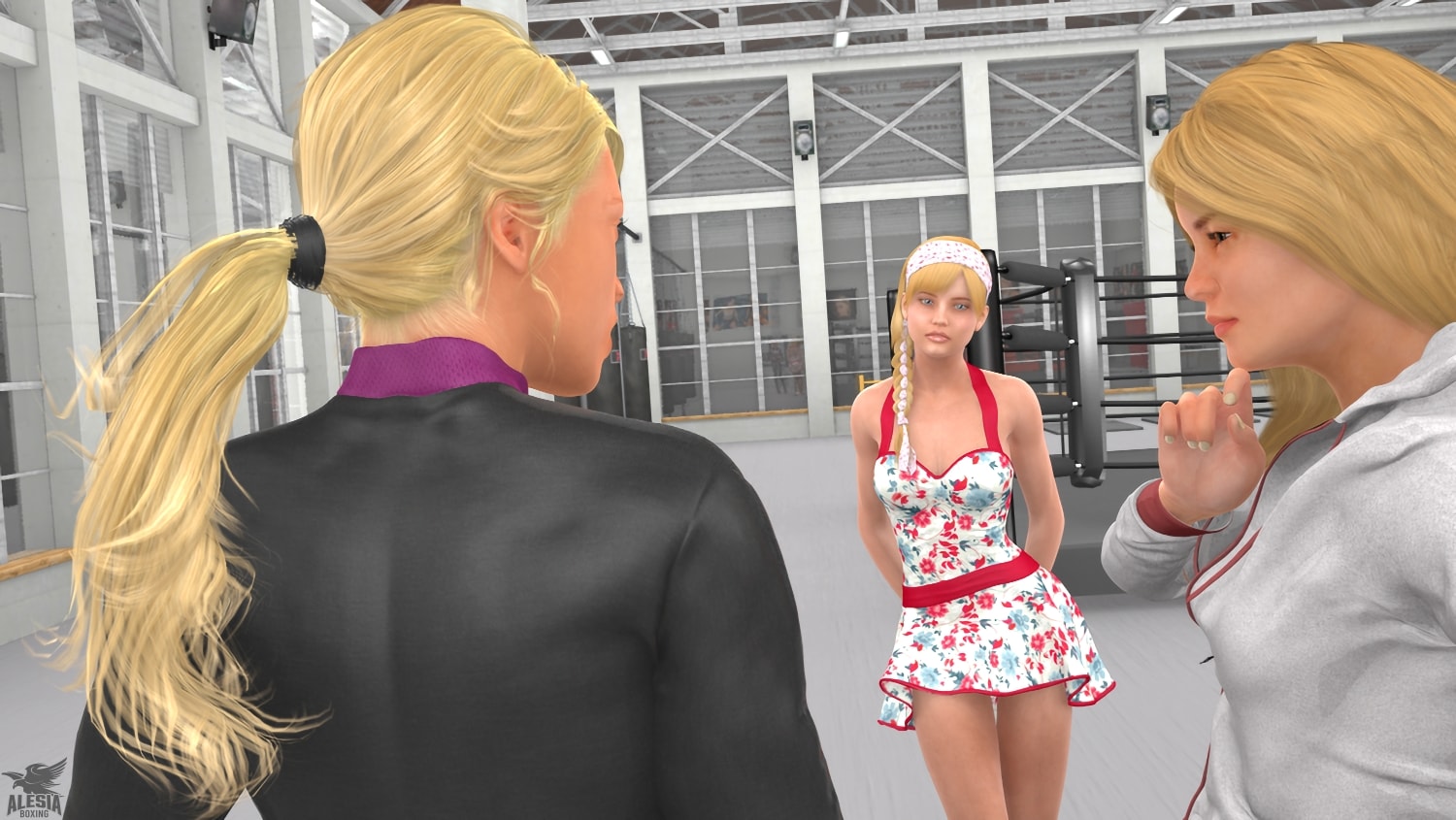 Sophie: “As much as I love and respect you, this is one decision you won’t make. Leonie was shortchanged by the Final Bell triumvirate. I’m doing something about it.”

Regina: “You realise you’re not responsible for what happened, I’m sure.”

Sophie: “I’m a volunteer. A gifted boxer walked in to apply for a pro debut and you guys sent her to Astrid Olsson. You knew she’d get knocked out. What you didn’t know was that she’d make enough of an impression for Astrid to go for scorched earth tactics.”

The coach sighs again and opens her mouth to speak, but a defiant Picasso interrupts.

Sophie: “Let me finish. I know that that helping someone in my own division is a risk, so I’ll keep it short. I’ll train with her this week. Show how to correct amateur flaws. Spar a bit for fun. And go to Veronica to demand a fair matchup for her second fight.”

Sophie: “She’ll have to say yes. Look. I’m not asking for much. We don’t invest in everyone but Leonie was thrown to the wolves. I’m just hitting the reset button so she gets normal conditions. Up to her to perform, then.”

Leonie: “After the debut, my amateur coach said that the pro game’s shenanigans aren’t for him.”

Learning that a sporting relationship melted down stings. Probably as much as the young prodigy’s punches.

The coach puckers her lips and looks up, with ideas swirling in her mind. “If you like, I can introduce you to Nadia Monteil. I sent Sophie to her in France for a spell and she’s done wonders. No strings attached. Deal?”

Regina: “Oh and Sophie: if you ever get into a fight with this chick and get clocked, you’ll have only yourself to blame.”

Sophie: “I can defend myself, thank you very much. Now let’s get to work, shall we?”

Sophie: “Alright. The biggest thing is correcting your movement. You bounce like you did in the amateurs. That’s got to stop. The pros sit on their punches. Bend the knees for stability.”

Leonie: “Yeah but that takes away my legs. My best assets.”

Sophie: “Legs are the foundation of a boxer, of course. You generate everything from that. I’m talking about being alert, stable on your feet when punching and moving around sharply between the trades. Jumping makes you vulnerable to counters. Instead, step forward, backwards and sideways. When you throw a punch, twist from your toes to the torso, bending the knees and releasing the punch for maximum impact. Boom!”

The number one contender offers herself as a target in the ring. Hands up to block and letting Leonie tee off, pro style. 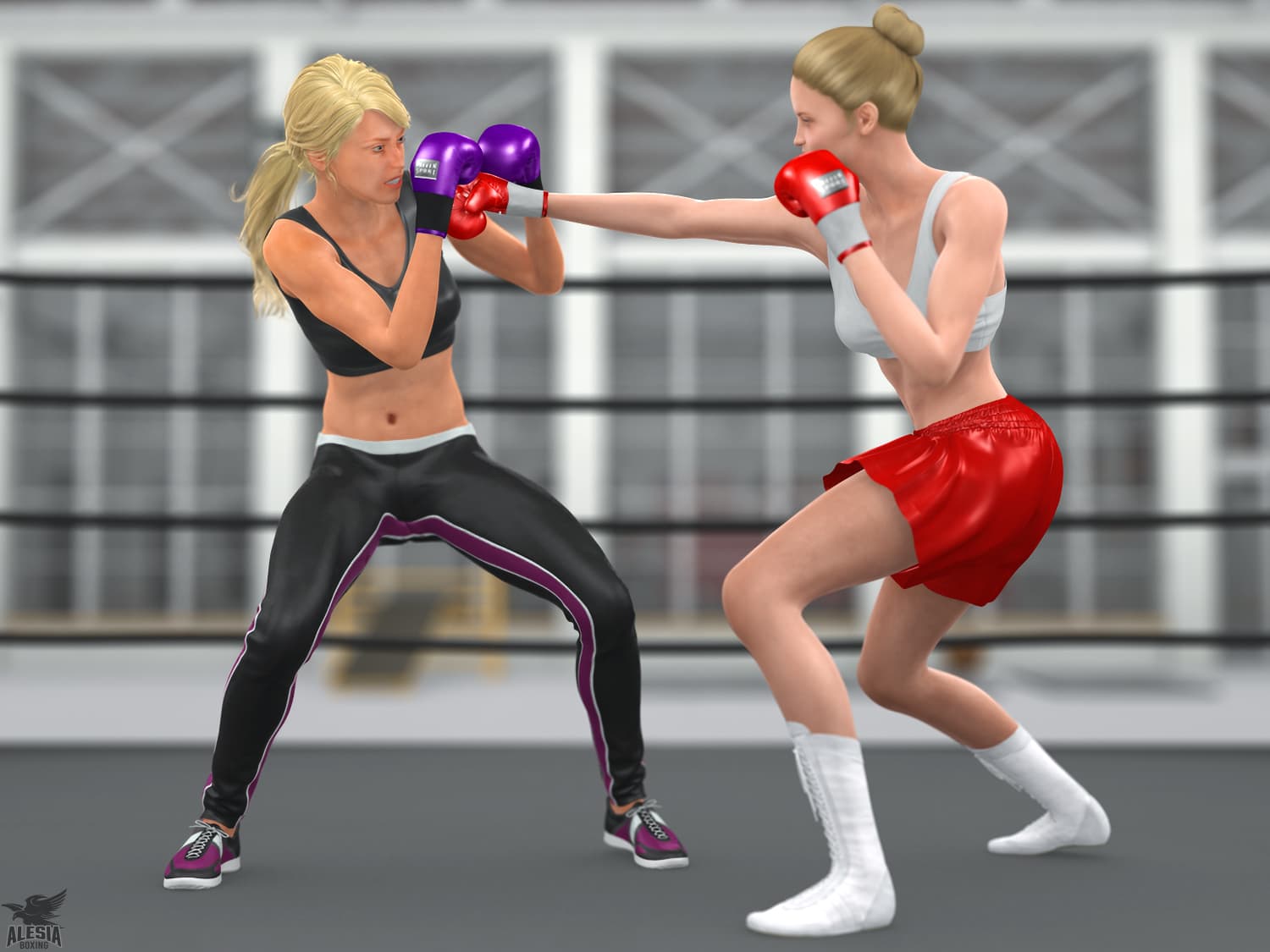 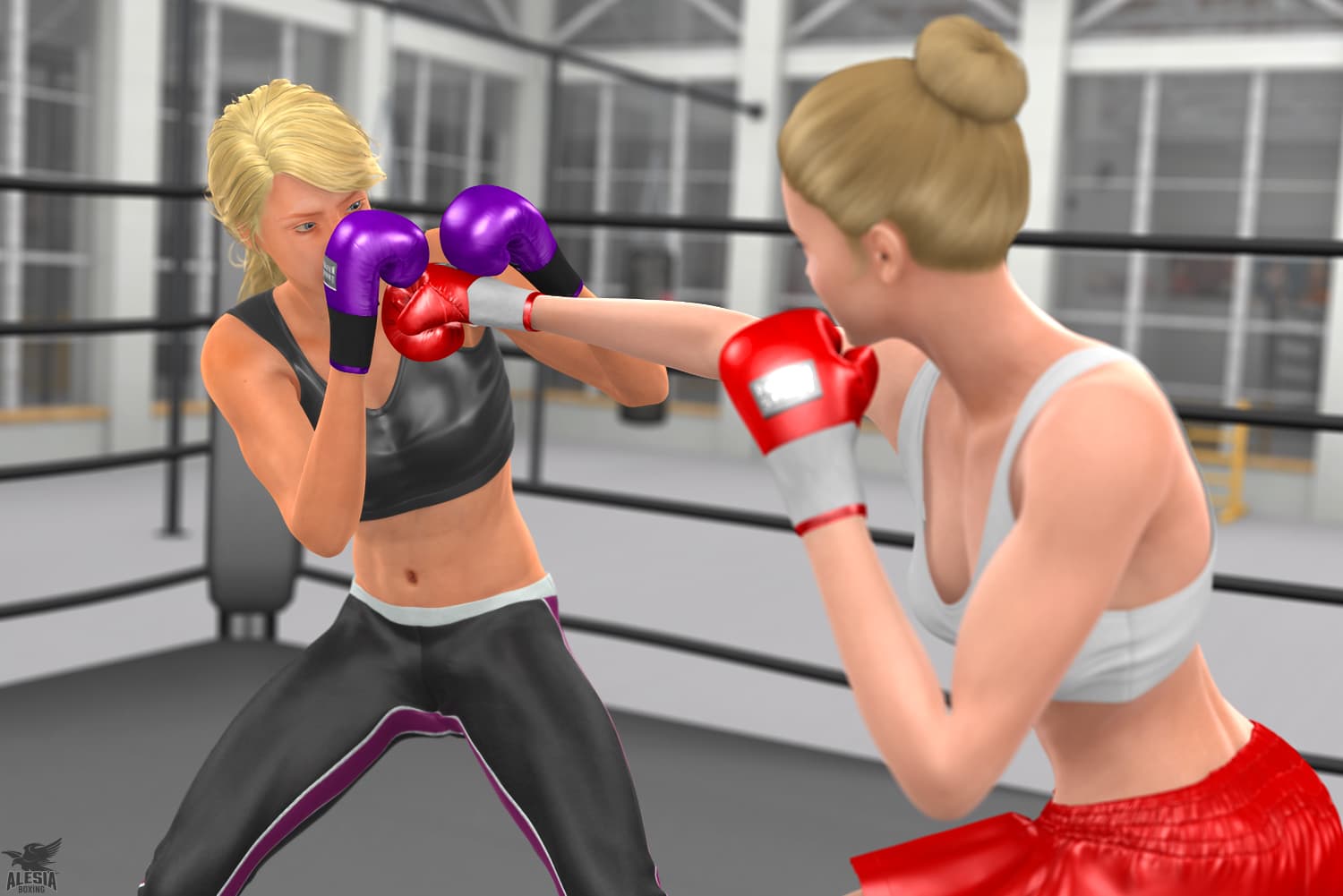 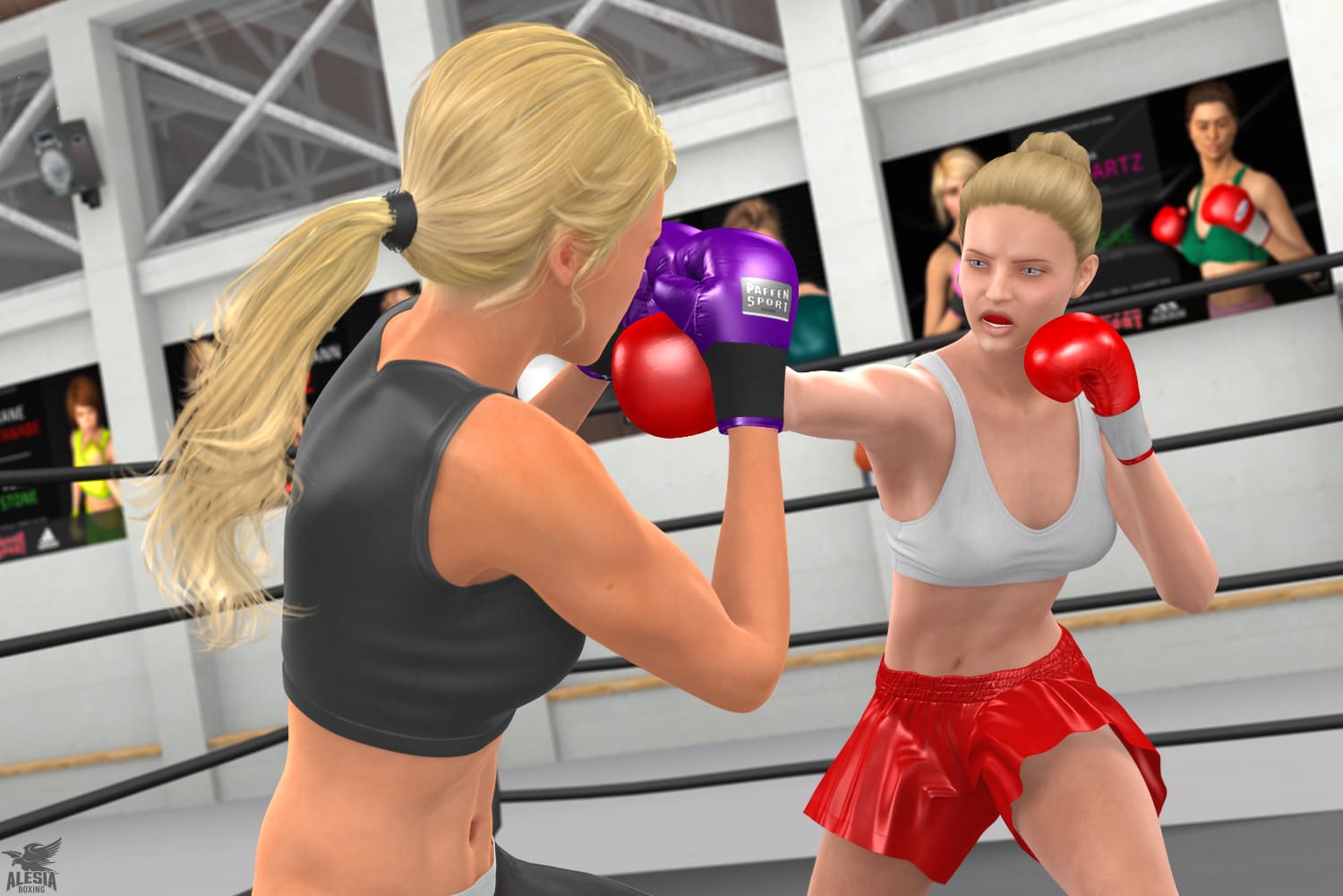 As promised, Sophie and Leonie make their way to the Final Bell HQ towards the end of the week. They get a greeting from the secretary before walking into the office of Heidi and Veronica. A perk of being a boxing star is that you are free to roam in the head office.

Veronica: “Hi Sophie… and Leonie. What brings you here?”

The highly intelligent Vice President connects the dots based on a frosty reply. “You want us to organise a second fight for Leonie.”

Sophie: “One that is equitable for someone in the early days of her career.”

Veronica: “You have no fucking business deciding matches.”

Sophie: “Ah, Veronica and her love for power. I’m not leaving the office until you say yes because market power.”

Sophie: “That would be picking the opponent. I’m not asking for that. Just redress for the raw deal you gave her on a pro debut.”

“Man, thinks Veronica while rolling her eyes. That’s a cookie made of concrete.”

Sophie: “You guys brag about the way you treat fighters. Then turn around and screw Leonie. What has she done to deserve it? Oh, I know. She asked nicely to work with us. What a gaffe.”

Veronica turns to the other girl. “Do you even have a pro coach, Leonie?”

Leonie: “Nadia Monteil is taking me on. We talked.”

The previously icy executive warms up. Nadia coached Sky Houghton to a title. She boosted Sophie and can sure shape up a prospect. Business instinct kicks in. “If… we’re doing this and you win a fight… you’re not turning around and running to another promoter. We’re calling dibs in the contract. Not negotiable.”

Leonie smiles: “Works for me.”

Veronica: “How will you fund training camps in France?”

Veronica: “Don’t tell me that you’re broke. This isn’t a bank.”

Veronica: “Then no deal.”

Leonie: “It’s not what you think! I just don’t wanna talk about money.”

The Final Bell Vice President goes back to her desk to take care of other business. This prompts the young boxer to sigh desperately, follow her and put all cards on the table.

Leonie: “My name is Leonie von Hammerstein, from Schwerin. You’re new to Germany, so you probably don’t know that the ‘von’ particle means nobility from the middle ages. The von Hammerstein were long tied to the Hohenzollern royal family. We have an estate, a palace and a coat of arms. We’re financially independent. No need to work to make a living. I can fund training in Australia, tickle kangaroos and stay in a five-star hotel the whole time if I fancy it. Can I afford training in Marseille? I can buy a residence for my stays there, if that makes you feel better.”

A couple of jaws drop.

Veronica: “Oh…. kay. I guess that finances are covered.”

The bitter orange laughs out loud and gets a side-eye from the executive.

Veronica: “Rich chick or not, no special treatment. We’ll find the right opponent. An option for us to extend if we like what we see. Take it or leave it.”

They shake hands and the trio part ways.

“The Schumann sisters, thinks Veronica. Tame one and the other one hunts you down.”

Just outside, the two blondes lean on each other and crack up as they walk.

Sophie: “What a revelation. Did you see her face?”

Leonie: “And yours! I’m not comfortable talking about the wealth. People become bloodsuckers.”

Leonie: “I know you’re not one. You act on principle and people can go fuck off if they don’t like it. You raised hell to help me. Allow me to thank you. Something fun.”

Sophie: “I wanna see the palace. A quick tour?”

Leonie: “Better. I’m your host for a day. We hang out in the garden. Have tea in the salon. Chef’s pizza for dinner. My bathroom will amaze you. My bedroom’s the biggest you’ll ever spend a night in. Only one bed for two but it’s so big. You can choose: cozy friends or socially distant in your half. But there’s no Wi-Fi.”

Picasso cackles. “NO WI-FI! Fuck yeah. Let’s do this!” 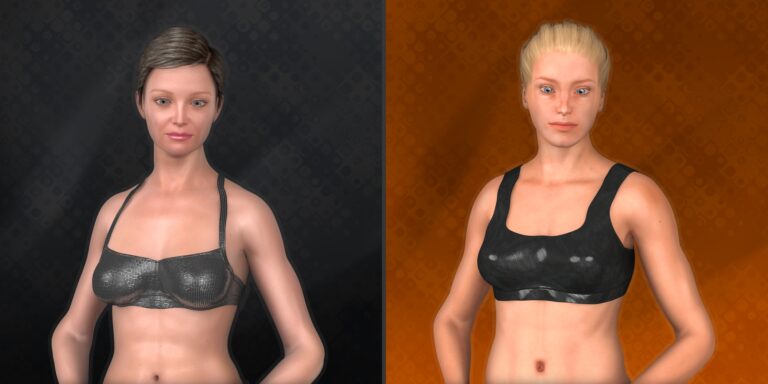