Leonie serves up a beating

We’re at the Sporthalle in Hamburg, where Leonie ‘The Eagle’ von Hammerstein takes to the ring for the second time as a professional boxer to face Emily Gartner, from the United States.

The smaller venue can host “only” 7,000 spectators for this fight night which is broadcast in the Hamburg region but not nationally. The match is in mid-card to make sure there is little pressure on the young German’s shoulders.

Currently 3-0 with three knockouts, Emily is a southpaw from Chicago who likes to come forward and attack opponents and she wears Everlast MX gloves, with harder padding for punchers.

In pre-match camp, Nadia Monteil taught how to end the jumpy amateur style that made Leonie get knocked out by Astrid Olsson. The French coach likes what she sees as Leonie circles around Emily from a distance. “Good. That stance is tighter and lower than before.”

Emily: “Come here so I can beat your ass.”

Wearing all-American colours, Emily wants Balboa-style knockouts. She finds the first round frustrating because her German opponent show something different from the debut she viewed on YouTube. An astute Leonie bends the knees, moves around the ring and puts ‘not getting hit’ at the heart of her strategy.

The brunette makes a mistake typical of novice punchers. She attacks recklessly with the conviction that all she needs to impose her will is launching fresh offensives.

A well-prepared Eagle sits back and loosens up, looking to respond with violence at the right moment. She sometimes hits gloves or lands a glancing blow but keeps toiling to generate a clean-cut scoring chance.

It comes with patient work. Emily applies more pressure to take Leonie to the ropes. The American comes forward aggressively while twisting to deliver a single left cross. The German answers with a pivot to make it miss. When the hand drops, she comes in and fires an overhand right hook. The gold glove socks the visitor’s cheek for a very audible PISH.

Sophie thinks: “Oi. Walking into those has to hurt.”

Does walking into a good shot make the American tinker her game plan? No. Despite coaching advice to vary the moves, she keeps initiating trades like a high-school bully. In the meantime, the member of the former nobility is selective. She picks spots to stand her ground.

At this level in the game, boxers who are on a flying start often have little sophistication to offer. Emily puts that on display when going forward straight to throw a single left cross. Leonie figures that now’s a good time to counter, stepping slightly to the left and unleashing a crunching left hook. PAFF.

The prodigy’s skilful response gets cheers from the crowd. These people spent their hard-earned money for violence and they’re totally getting it.

“That open chin is fun to hit, thinks Leonie. Keep it coming.”

Lather. Rinse. Repeat. It’s a basic boxing lesson that the girl in black and gold enjoys but it doesn’t last forever.

Emily hits gloves a few times while throwing combinations that take the German near the ropes in Round 3. She finishes throwing a right hook and looks to close in with a left hook. With the best of timings, the host loosens the guard and lets her own left hook fly.

For the first time of this one-sided beating, Leonie decides to take a risk by putting together a savage combination. She follows up immediately with a short right hand to hurt a stunned Emily. The gold glove speeds in for clean, hard contact. PISH! 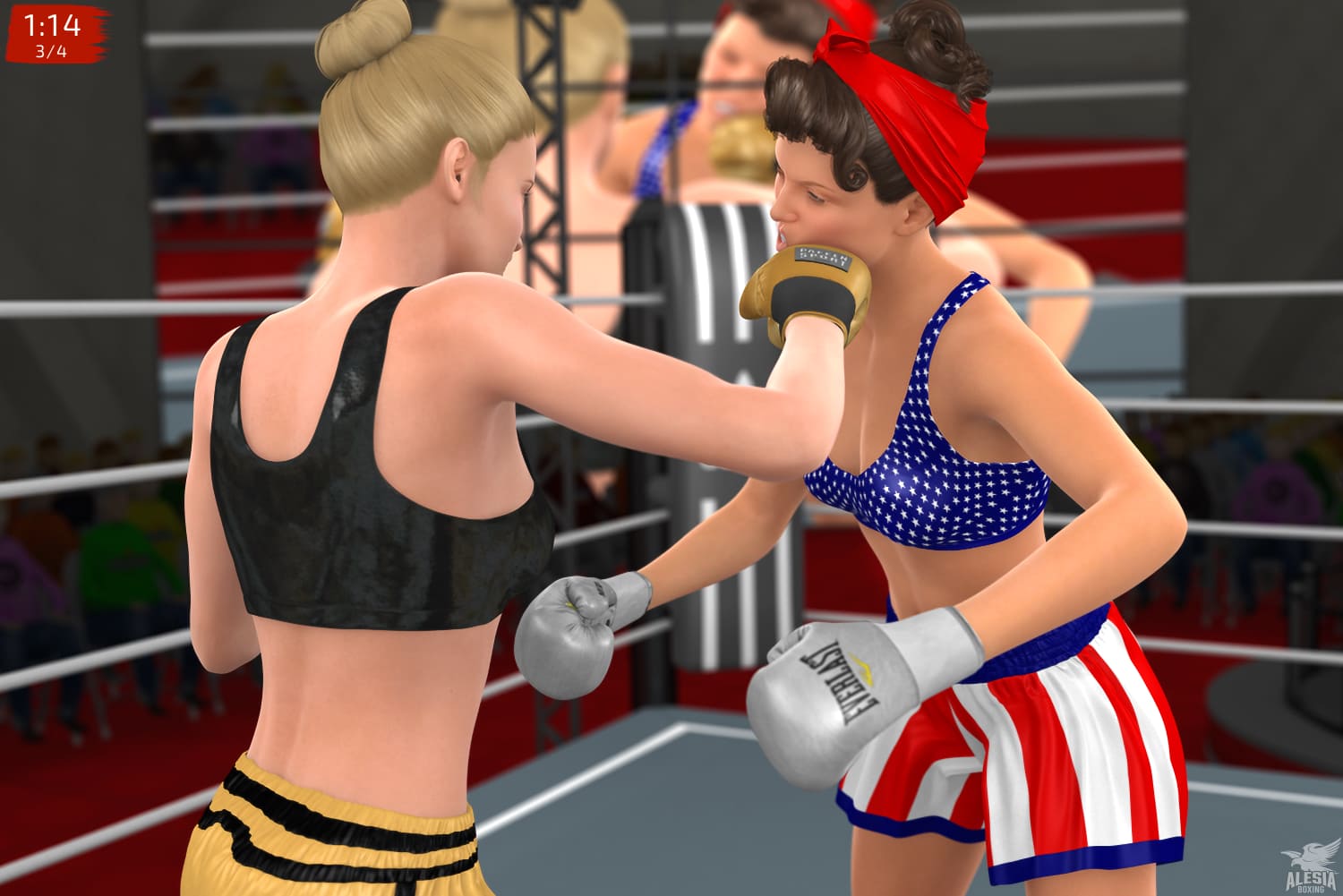 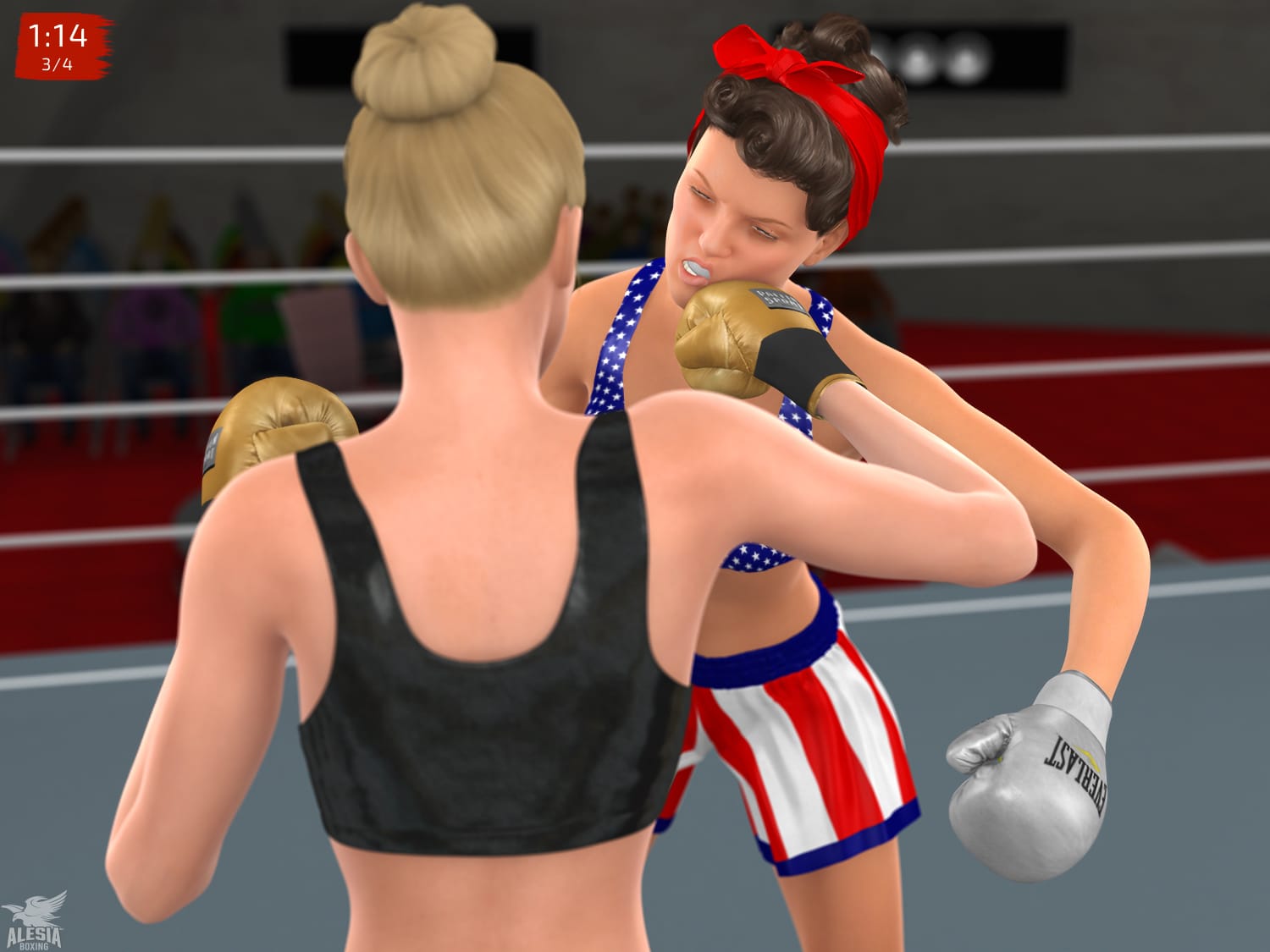 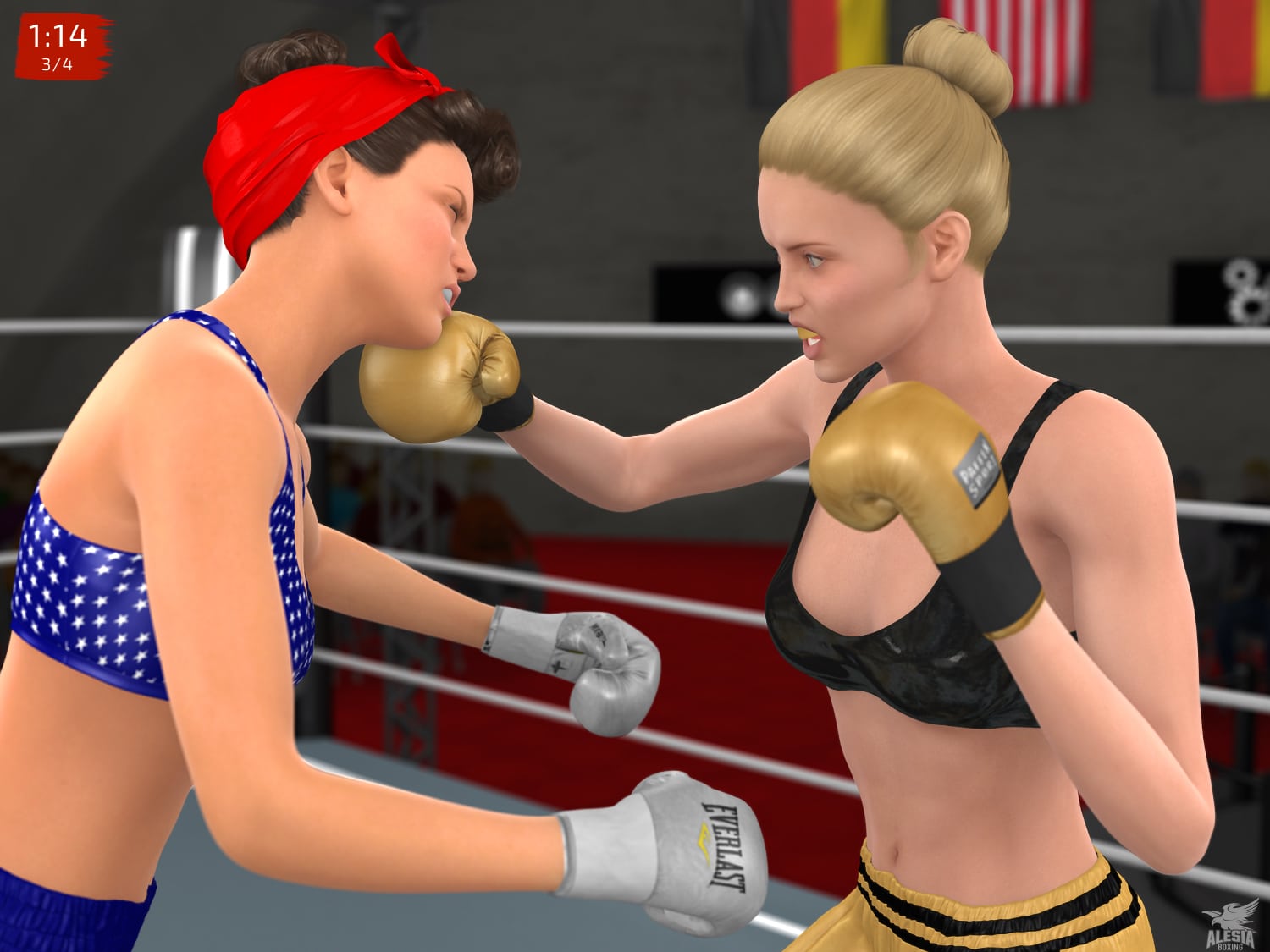 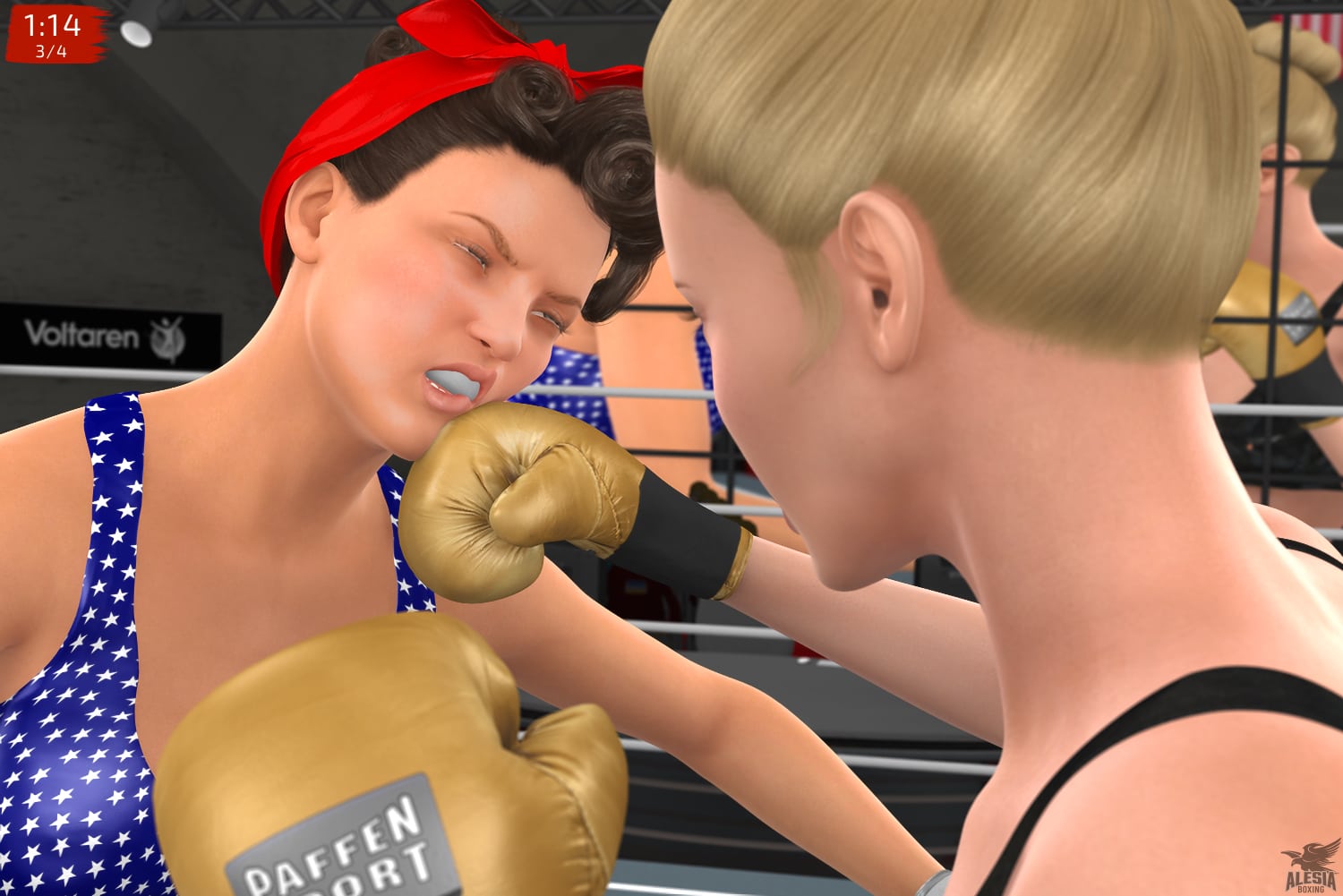 Is she done yet? Nope. Schooling by Nadia showed Leonie the importance of bringing a combination to its conclusion after hitting the target. The timing’s perfect when your punches have inflicted great pain.

The German turns around for leverage, digs into her repertoire of face-smashers and plucks out the left uppercut. The fit is as natural in following up on a short right hand as a scone to accompany a cup of tea. A wide open American can do nothing as the gloved hand rises to crack her jaw.

The tea enthusiast may delight in this a little more than when she has her afternoon ritual. 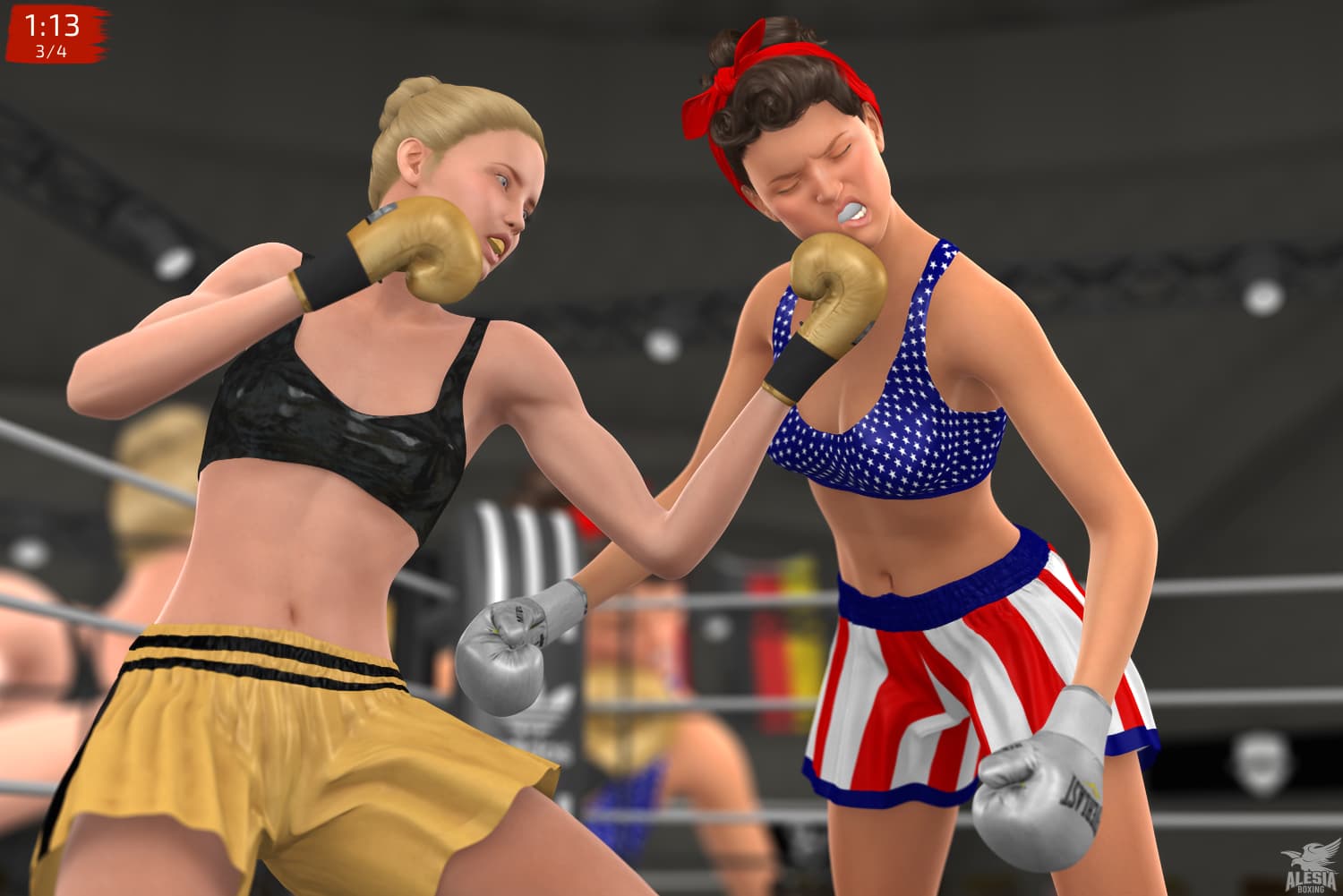 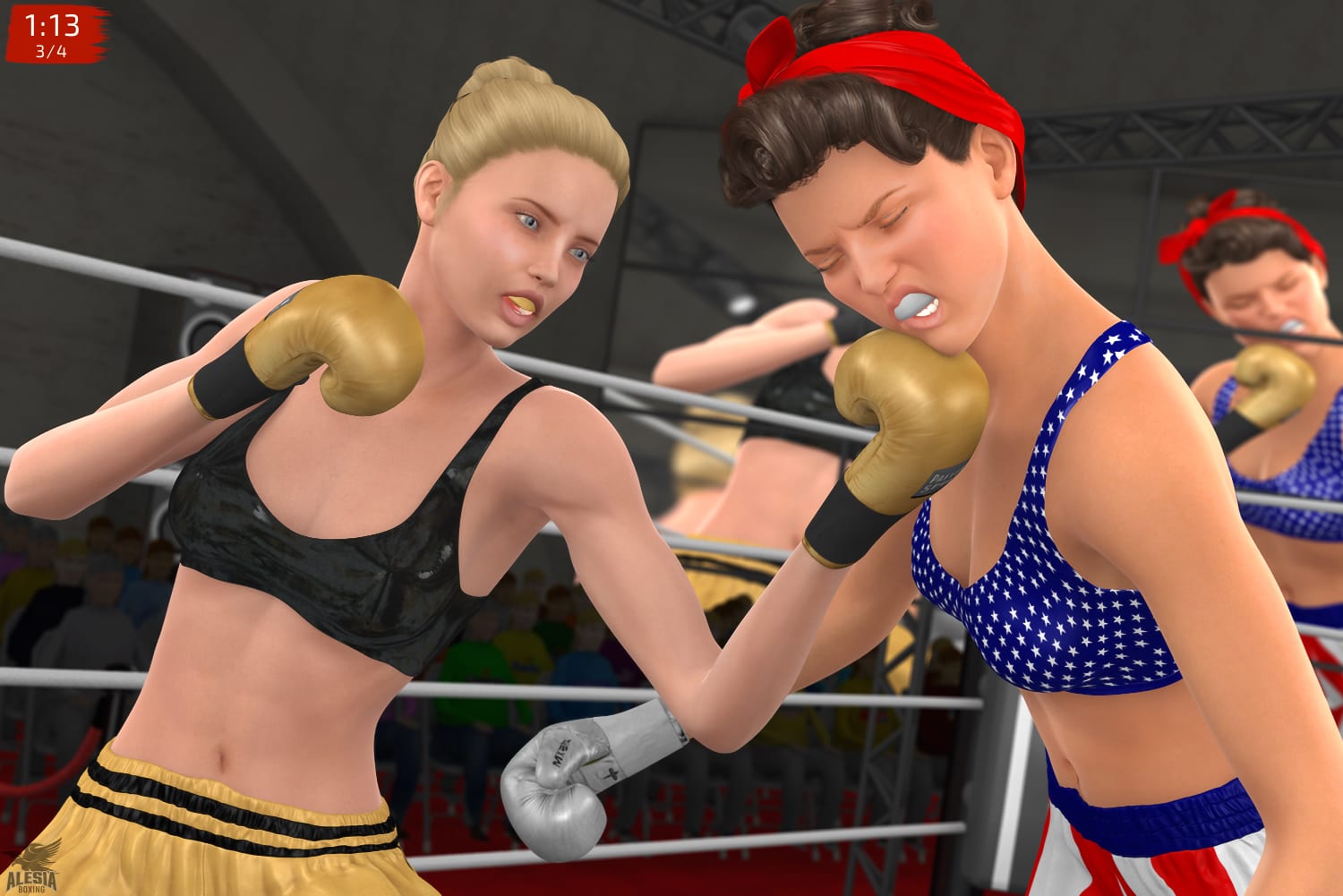 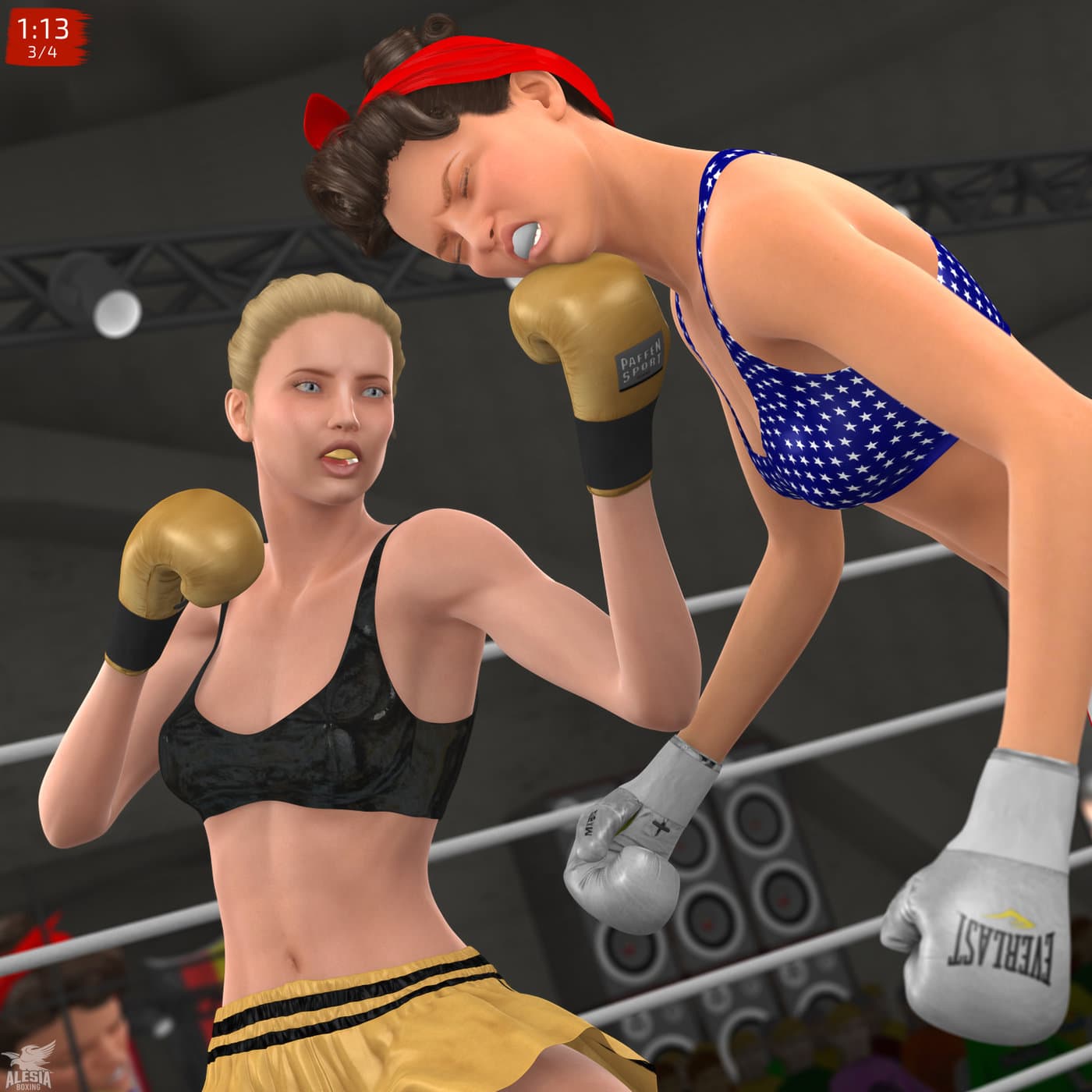 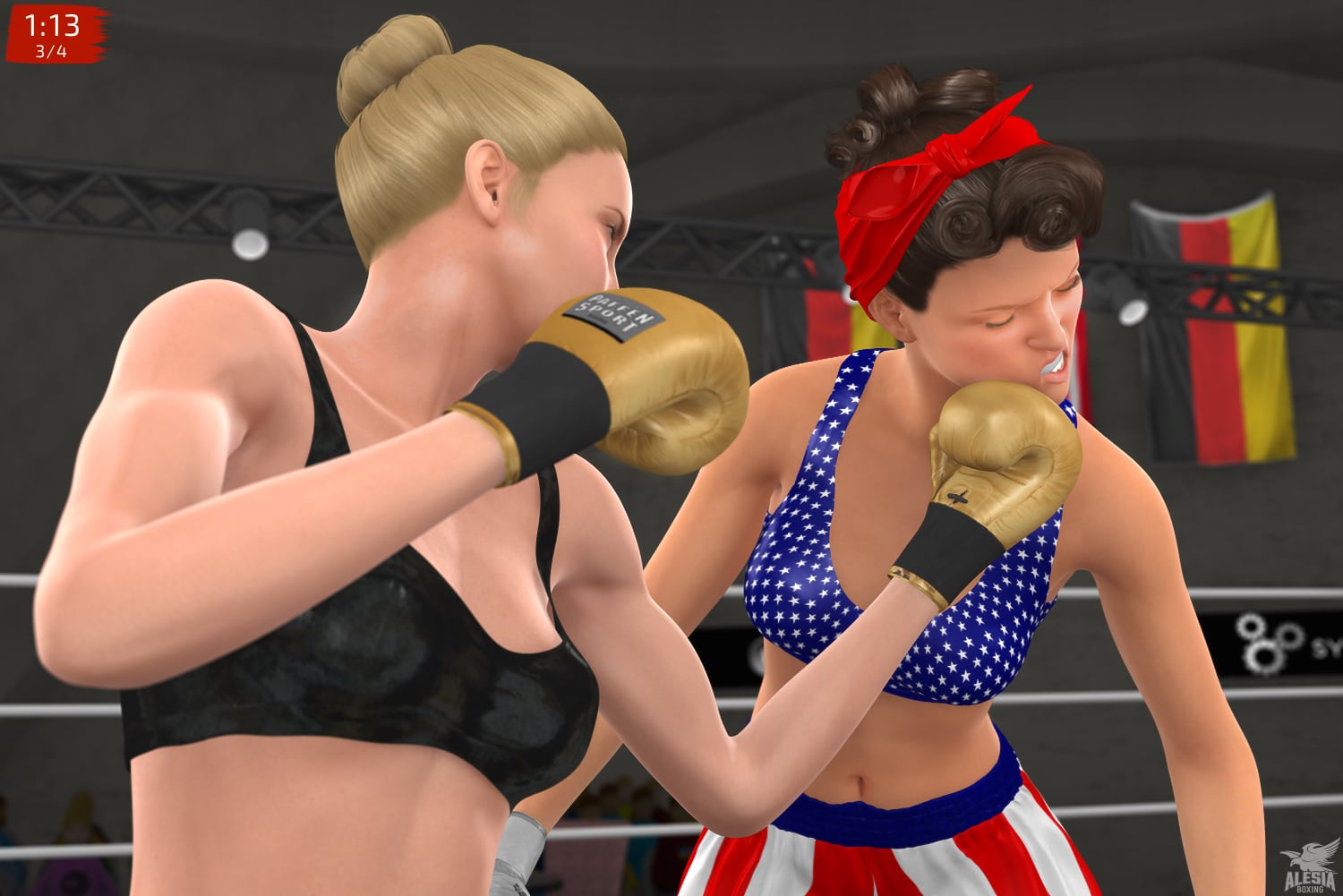 Walking into three powerful punches without a defense within two seconds is no cake walk, though. Overfed gold leather, Emily falls forward and grunts again due to the pain. She hits the canvas. The crowd cheers what appears to be a clean knockout.

Leonie: “Come on. Get up. I can use a longer workout.”

Referee Zelda Deniz points Leonie to a neutral corner. One look at the downed American tells her that she is dazed and confused as a result of three pieces of dynamite exploding in her face.

Sophie thinks: “What a fucking combo, that one.”

Leonie jumps up to celebrate the knockout before joining her coach, with a friend climbing up to join the freshly minted duo.

Nadia: “We still have stuff to work on, of course, but tonight? A perfect 10. I’m posting this knockout everywhere.”

Nadia thinks: “This kid is a gold mine. I’ll have to thank Regina for sending her my way.”

Tonight’s winner is packing her bag in the dressing room before getting out.

Leonie: “What do you think?”

Sophie: “I think Nadia will make you a first-class fighter. Those hands of yours will have to be tested for nitroglycerin. Someone call VADA.”

They laugh out loud on their way out.