Virani gets her moment, but not without some controversy

As the fighters rise from their stools before Round 5, a short, unexpected delay gives both fighters a chance to think for a moment before hostilities begin.

Michaela thinks: I’m close to the breakthrough. I have to keep pushing. I can break her this round.

Virani thinks: This hasn’t been my fight so far. But I can change it.

With the bitter feelings of the last round still fresh in the minds of the two boxers, another high intensity round is exactly what happens. Challenger and champion engages in trades. Most are partial contact or absorbed by gloves, but the best punch of the exchange is at the end of one when Michaela gets low and drills Virani with a big right hook to the body.

Laila: “Sommer throwing well to the body even under pressure. The German is just such an instinctive puncher that she is getting the better of MacVicar in the exchanges, which is usually her strong point.”

The close quarters combat doesn’t let up. Both fighters are pressed into such close spaces, but don’t want to stop punching each other.

As the situation devolves into a struggle along the ropes, both use their free hands to continue to throw short punches at each other, even when the referee is just about to break up the action.

Akane: “Ladies! Come on! Break when I tell you!”

The two fighters break apart grudgingly and get back to the action. There’s a bit of a breath taken by both as they think what to do next.

Virani decides to work from long range, flicking out a jab as a tool to see how Michaela reacts. She sets a trap for the German, expecting Michaela to get low to avoid the jab in an attempt to get inside. The German crouches to get low and Virani uncorks the right hand she had cocked. Late movement from the champion makes Virani’s right hand sail wide, but her elbow inadvertently catches ‘Queen Kong’ flush.

Virani thinks: Well that kind of sucks for you. But turnabout is fair play. 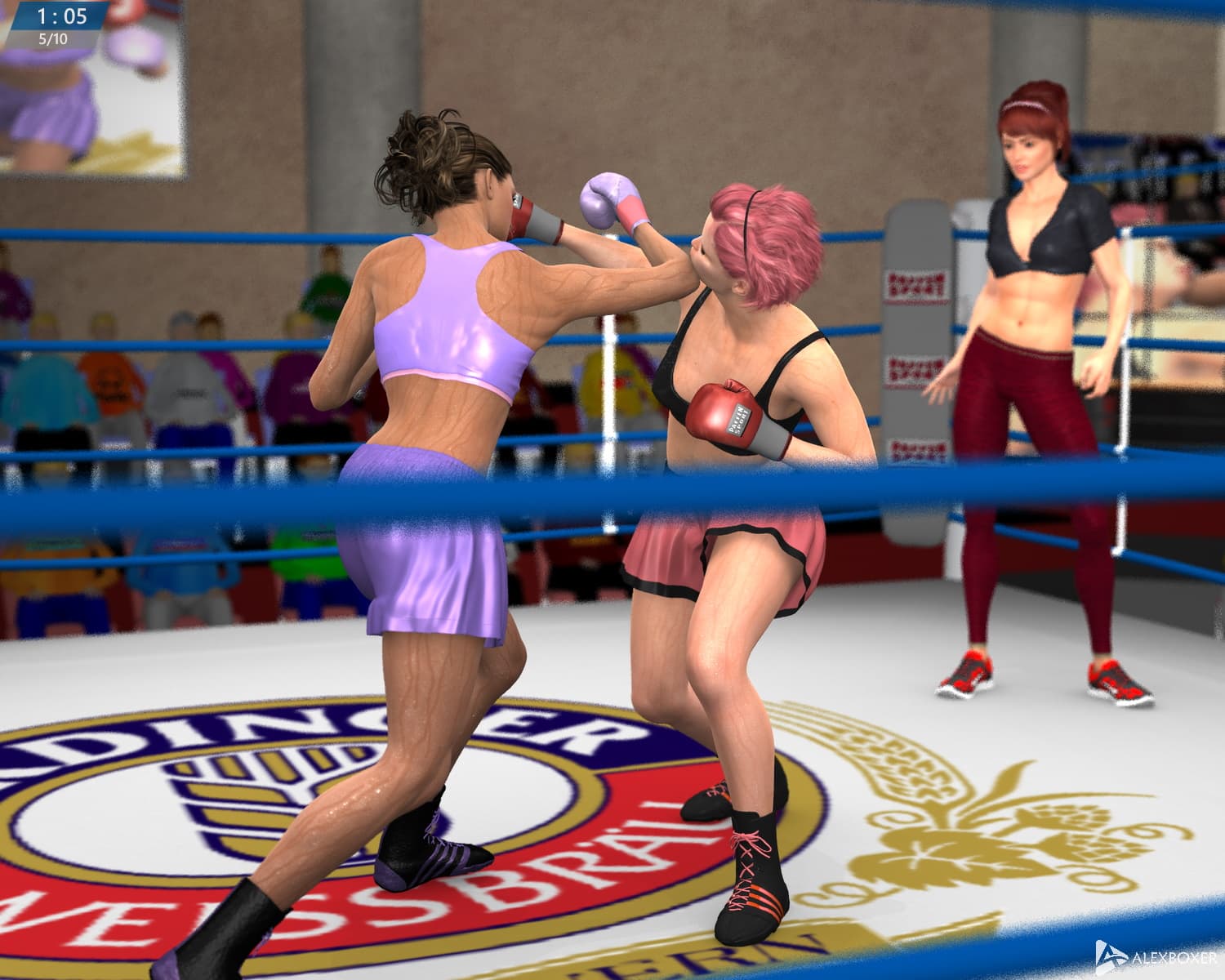 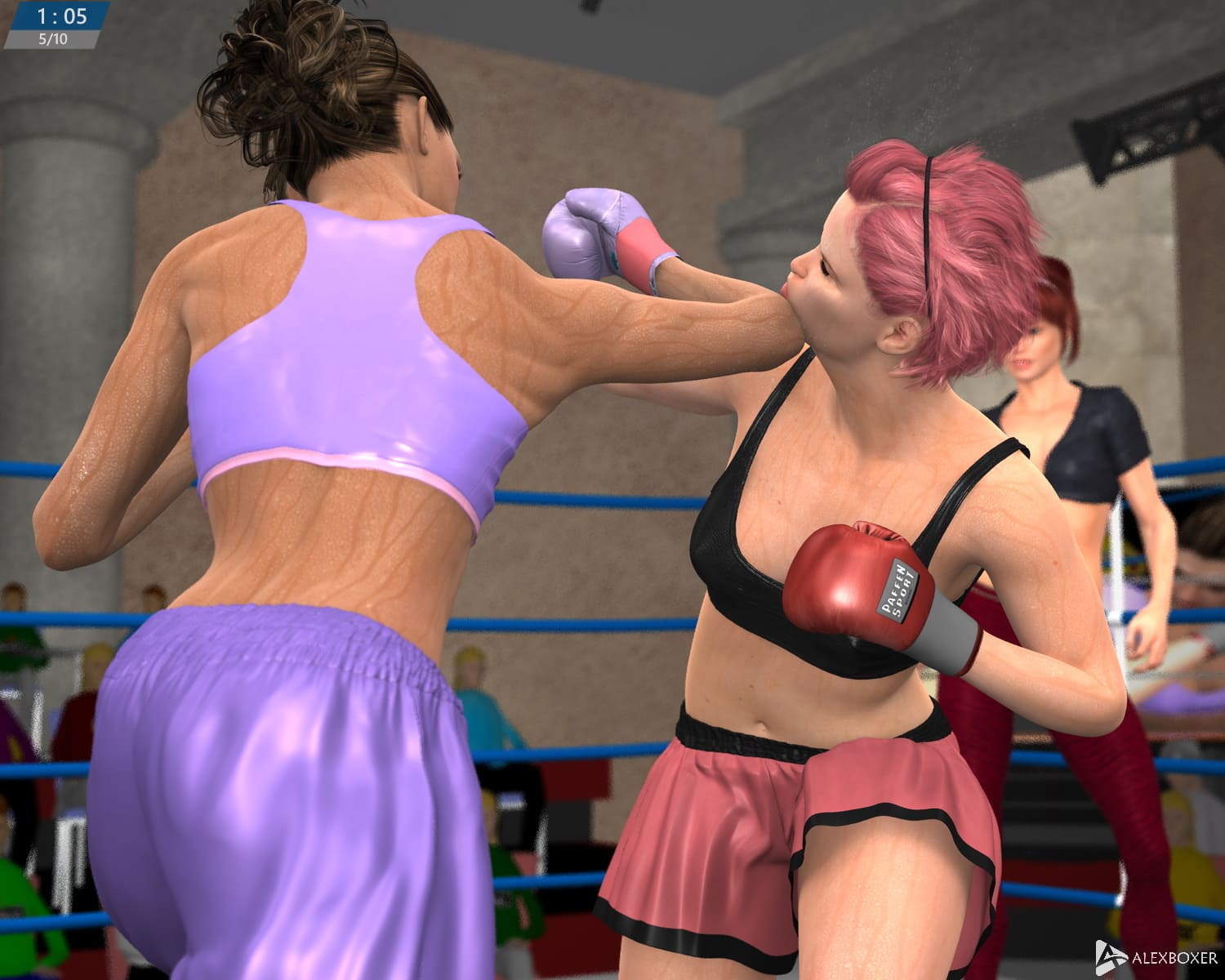 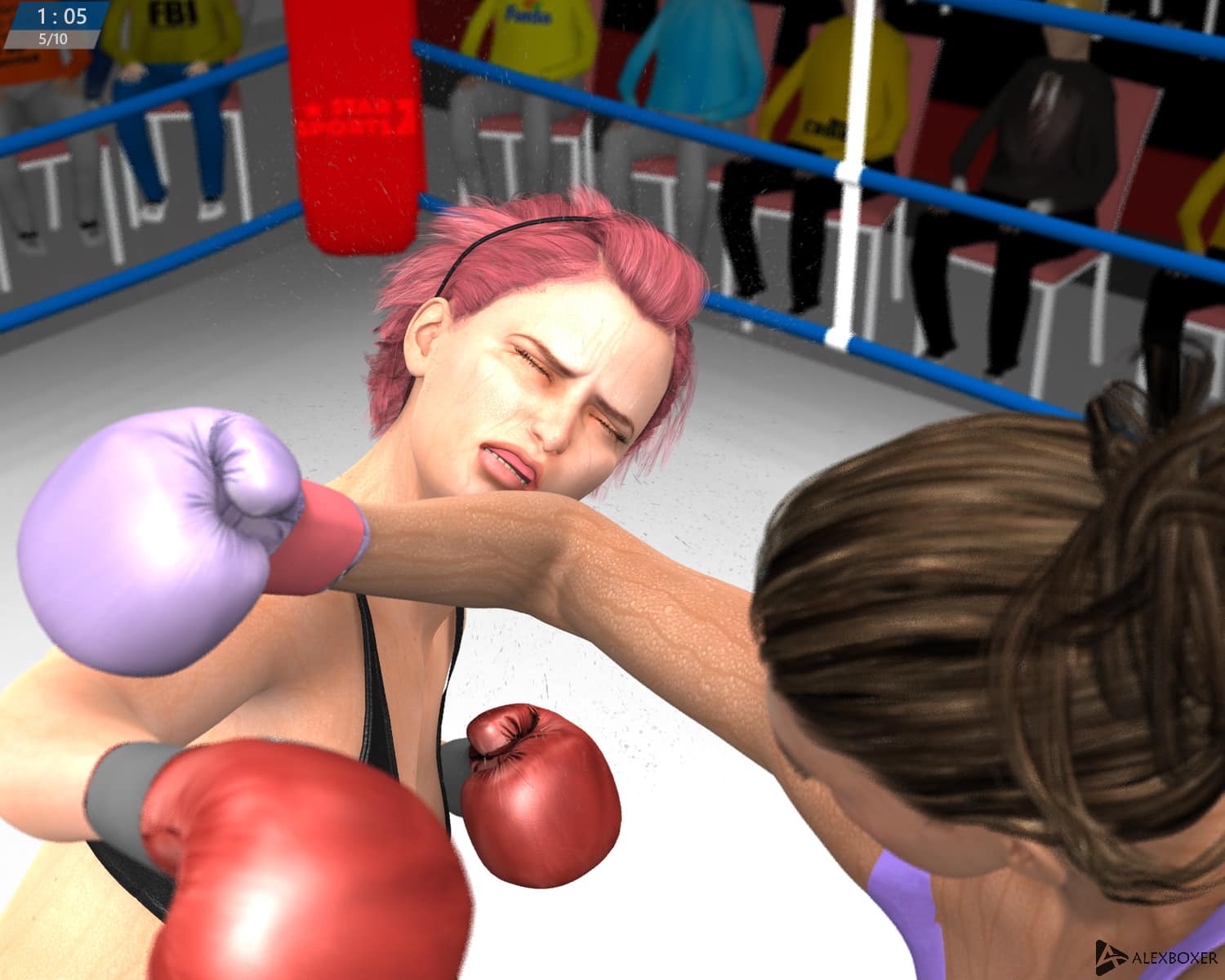 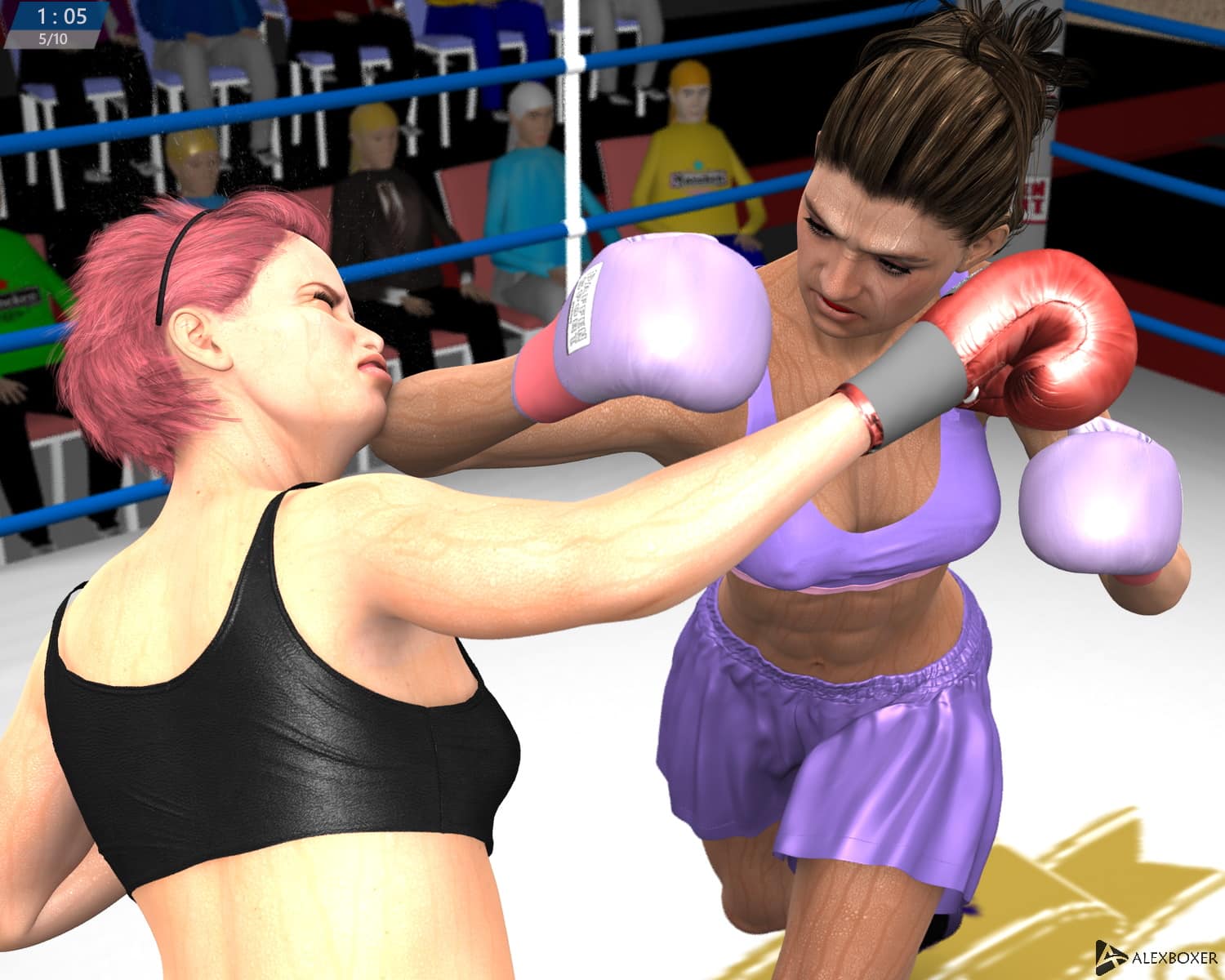 Dazed by the impact of elbow hitting jaw, Michaela stumbles back, but Akane Watanabe is quickly on scene to give out justice.

Virani hesitates, wanting to say something to the referee, but the stern glare of the Japanese-German dissuades Virani from doing so.

Akane: “One point deducted from Virani! One more foul, and I will disqualify you.”

Virani has no outward reaction, having already expected it from the referee.

The referee turns her attention to Michaela, who stands with her hands at her side, a bit rattled by the biggest strike of the night.

Akane: “You have five minutes. I’ll be back to you.”

Michaela thinks: That bitch thinks she can slow me down with an elbow? I’ll show her.

Virani’s a bit cautious as the fight restarts, a slight fear of being disqualified in her biggest fight to date slows the Canadian down.

Michaela is anxious to get revenge for the illegal blow – the point deduction not enough punishment for ‘Queen Kong.’ The champion comes forward and Virani concedes space, now sensing an opportunity to force and overreach. Michaela comes forward, throwing a right hand with an evil purpose behind it. Virani takes a slight step back before throwing a right hand that connects on the chin of the champion.

Laila: “A clean counterpunch from the challenger who caught her with some excellent timing!”

Michaela, after taking a clean shot on the chin, freezes for a moment as her brain tries to recalibrate her senses. It’s not something that you can do in front of a finisher like Virani, who throughout her career has been vicious at putting an end to fights. With a right hand already thrown, she’s primed for the left hook, and Virani pivots smoothly into the punch that has brought her so much notoriety and so many victories over the years.

Purple leather meets no resistance as Virani’s left hook finds the chin of the champion, sending sweat flying from her head.

Laila: “A left hook from the challenger! That was out of nowhere, and it was a bomb! This is a chin check indeed for the champion. She’s in trouble!” 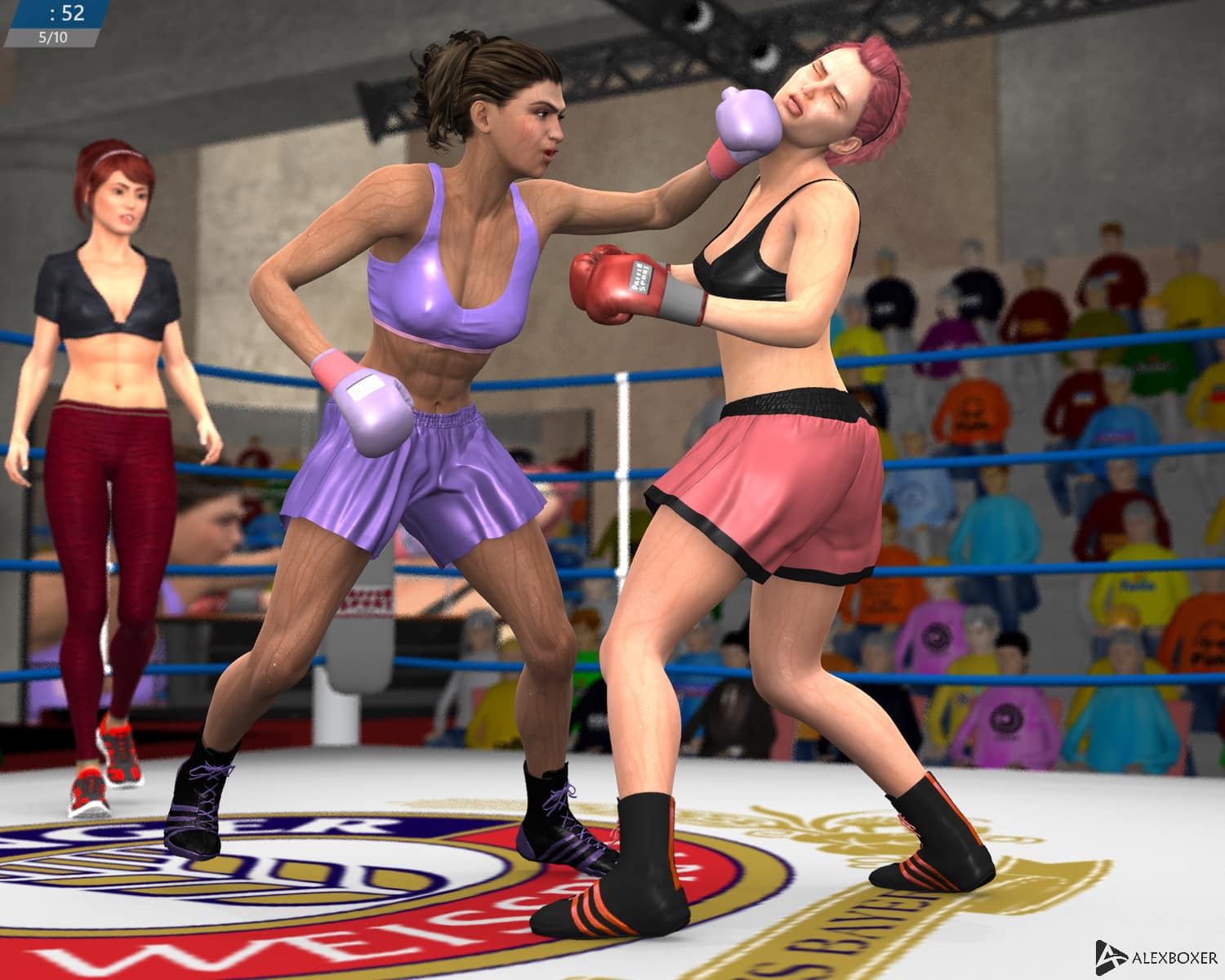 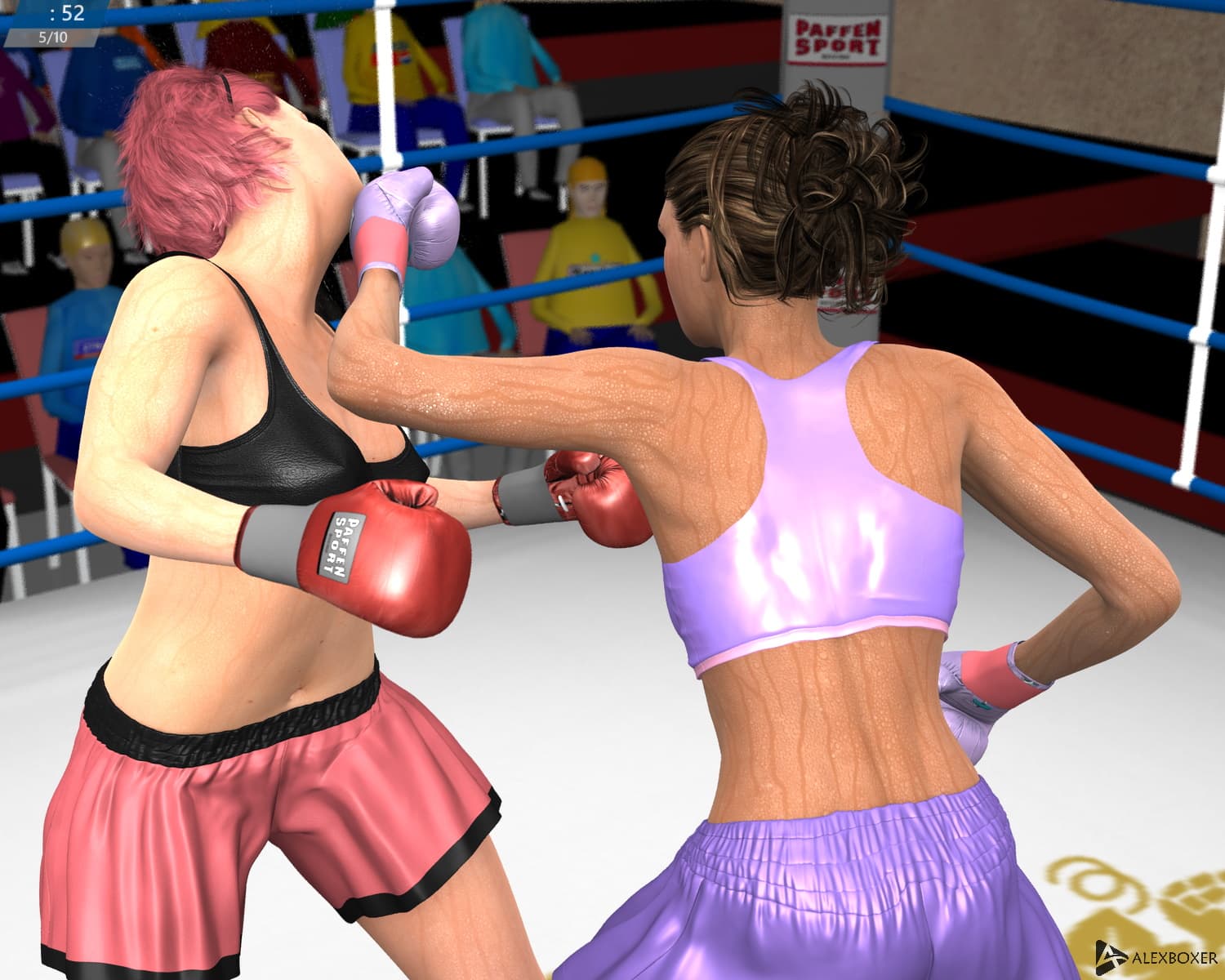 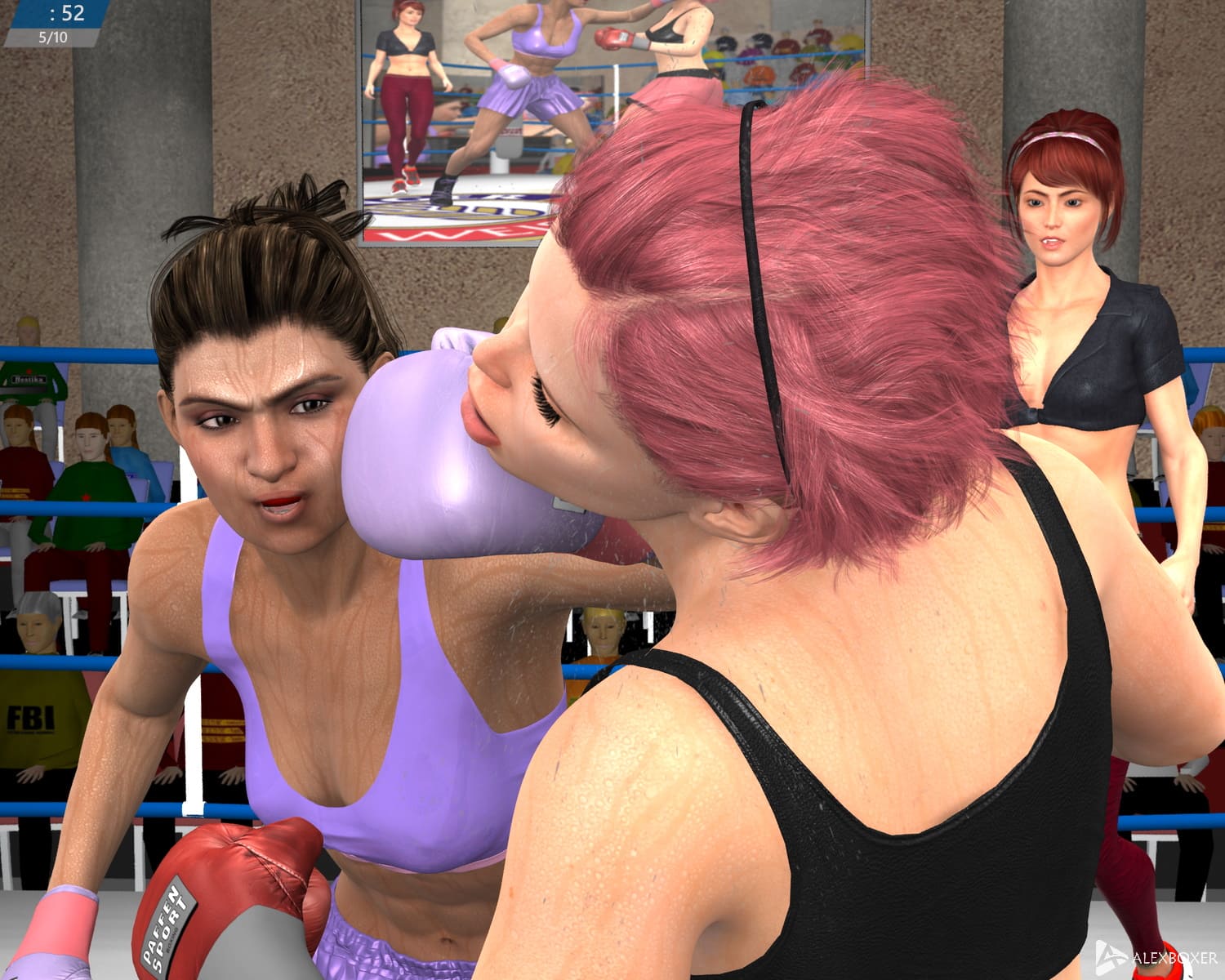 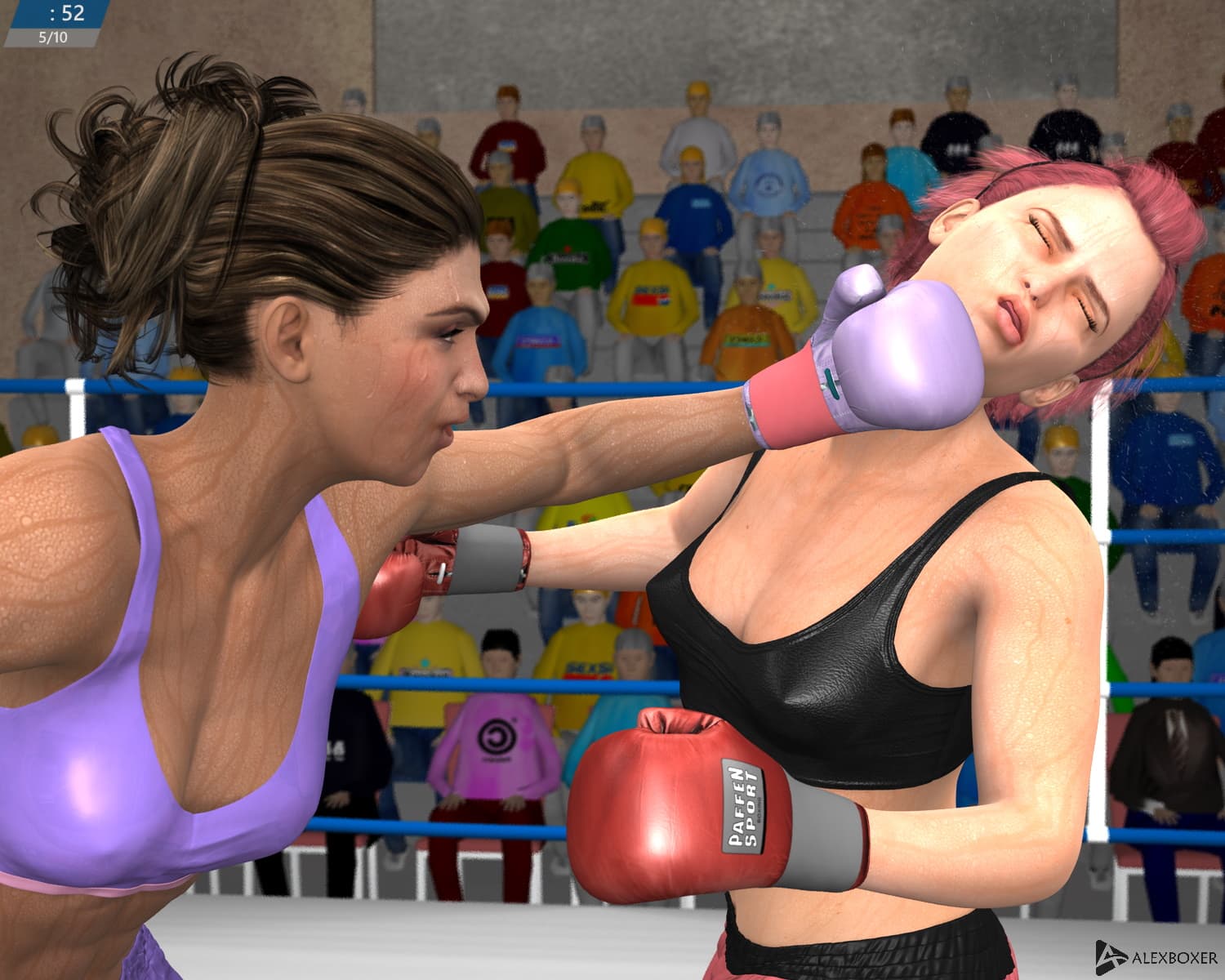 More than just in trouble, Michaela can’t maintain her balance after getting smacked twice with clean punches on the chin by Virani and she falls to the canvas for the first knockdown of the fight. She ends up on her back, flattened by receiving Virani’s purple leather. Much of the German crowd groans to see the local girl go down, but there’s a good section of fans that cheer the violence.

Laila: “After being struck by a thunderous left hook, Michaela Sommer is down, and it does not look good for her. She might have wanted to take that full five minutes of recovery time she would have been allowed if she had wanted it. That could have been the decisive moment.” 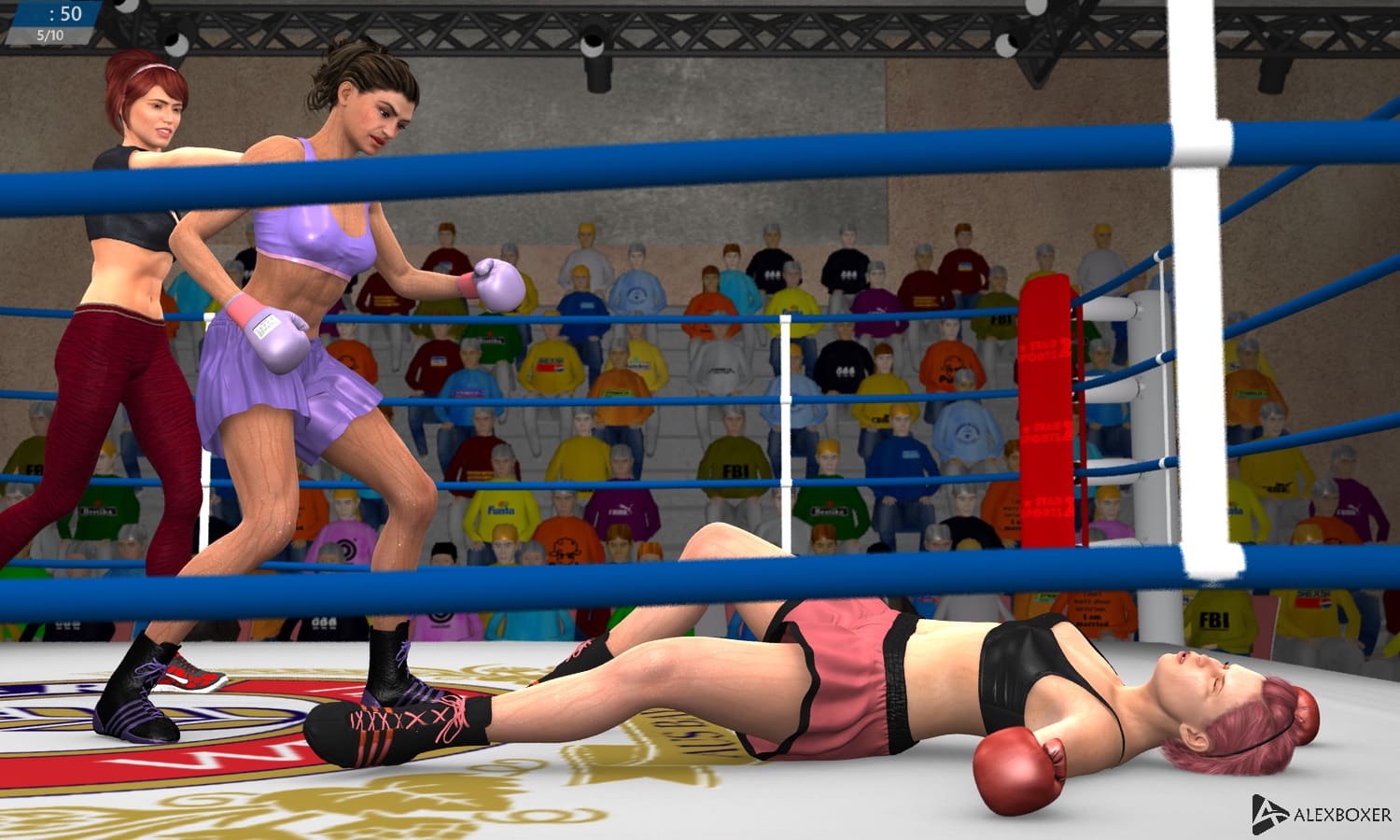 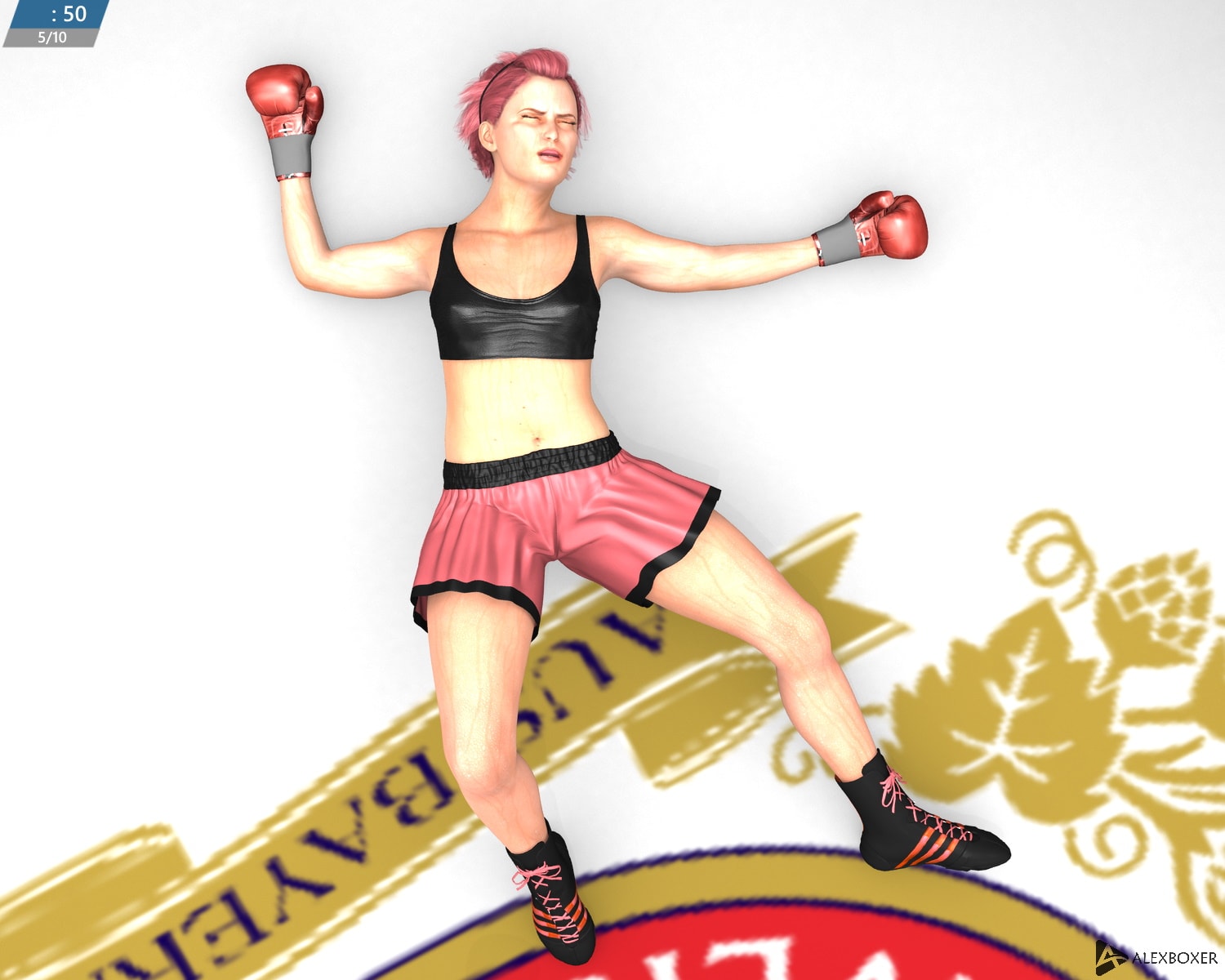 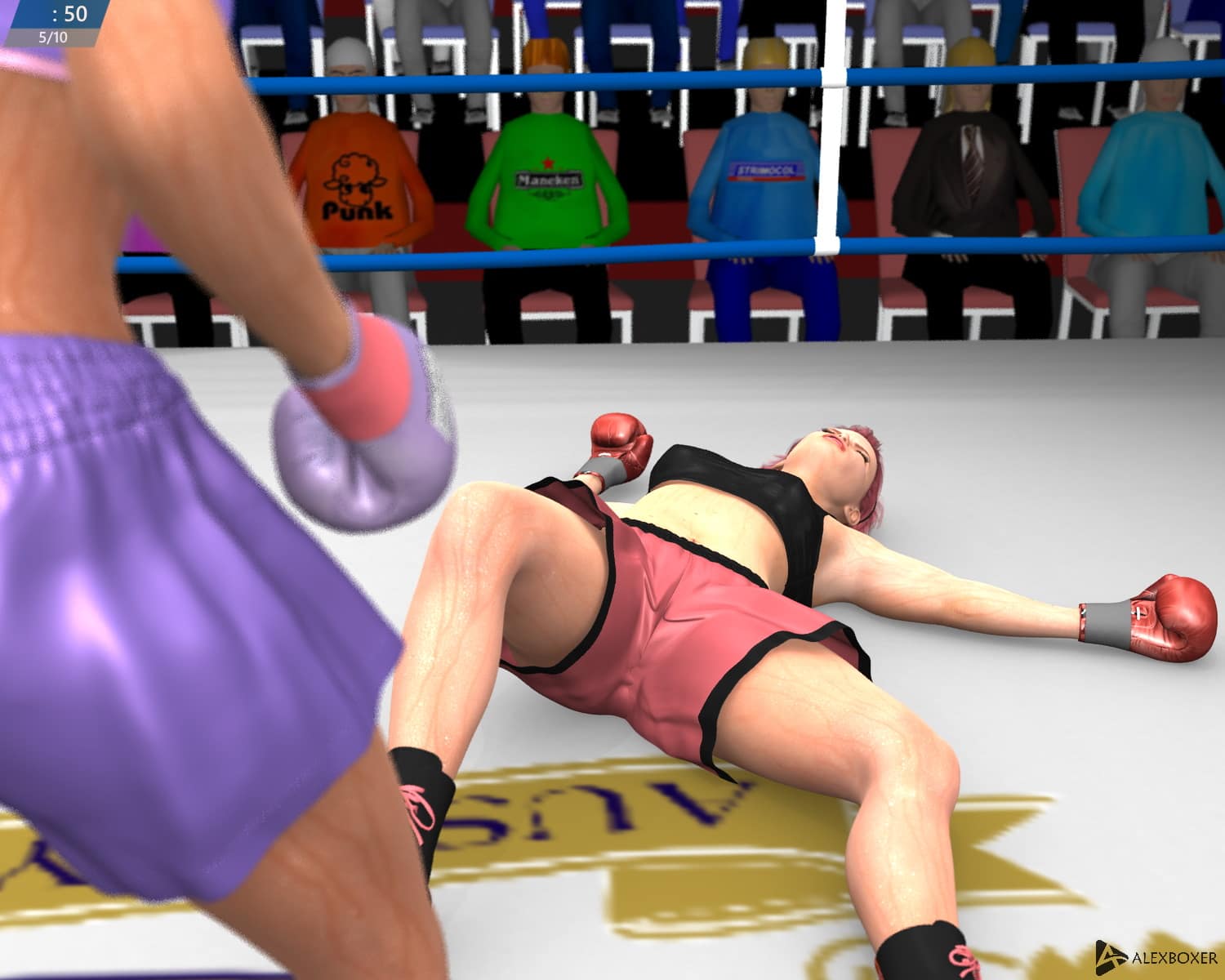 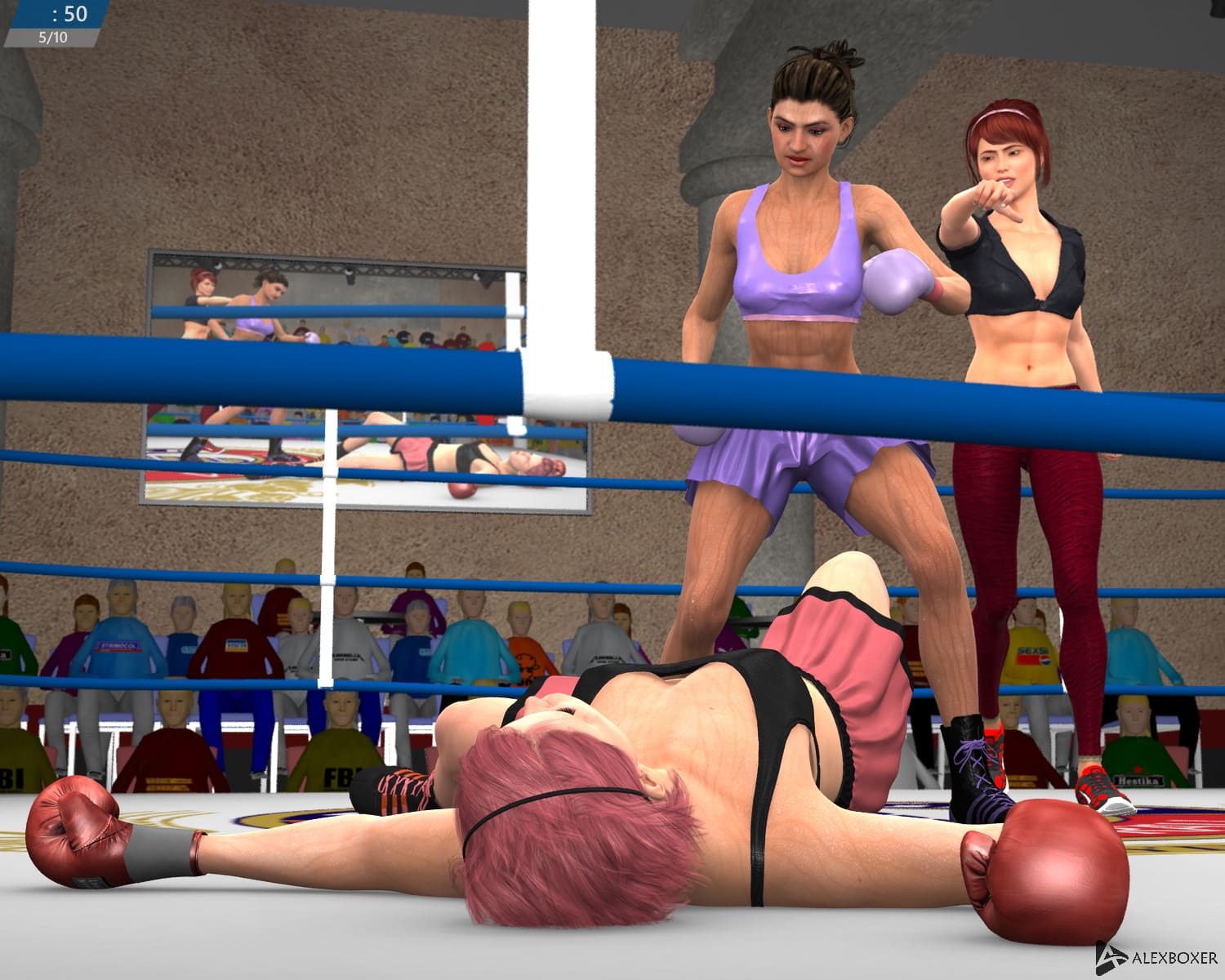 Before Akane can point Virani to the neutral corner, the challenger is already hightailing her way there, wanting nothing more than the count to begin quickly. Starting counts quickly is what Akane Watanabe is known for.

Akane thinks: She’s hurt, but she deserves a chance to recover.

Staring up at the ring lights, Michaela is vaguely aware of herself and that she must get off the canvas. Her fighting instincts tell her to get up, but brain and body are not communicating well, so all she manages to do is roll slightly on to her side in an attempt to prop herself up.

Laila: “The champion is fighting, but she looks like she might not make it! Her eyes don’t seem focused and she may not be able to get back to her feet!”

Finally, a message from Michaela’s brain makes it through to her body. It says ‘you’ve sustained too much damage time to stop fighting.’ Michaela rolls back onto her back, her fight over.

The referee makes the decision clear to the rest of the arena, waving her arms over Queen Kong and announcing loudly:

Laila: “The champion is knocked out! Virani MacVicar has won! The Canadian Cobra knocks out Michaela Sommer in the fifth round to claim the Featherweight championship of the world!” 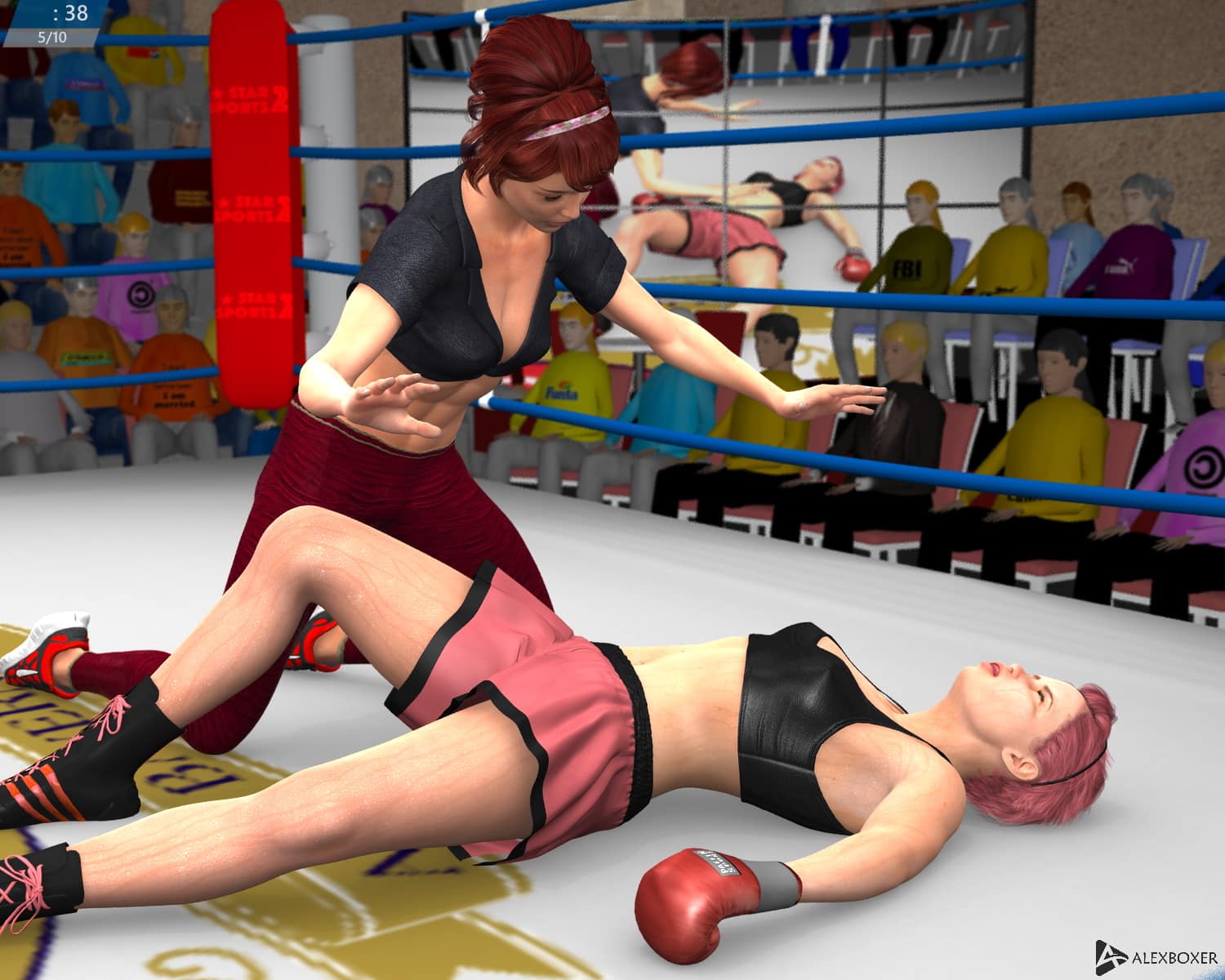 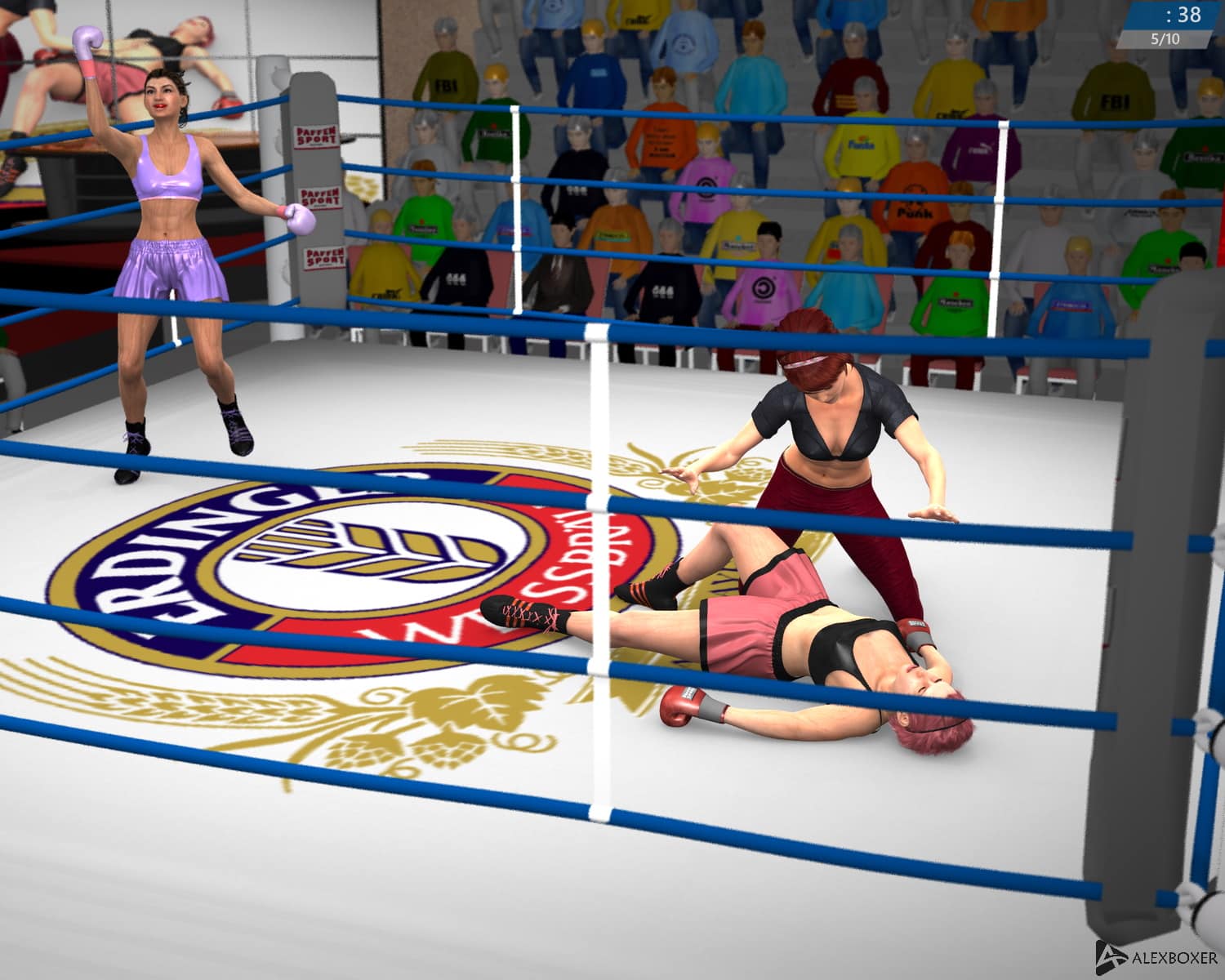 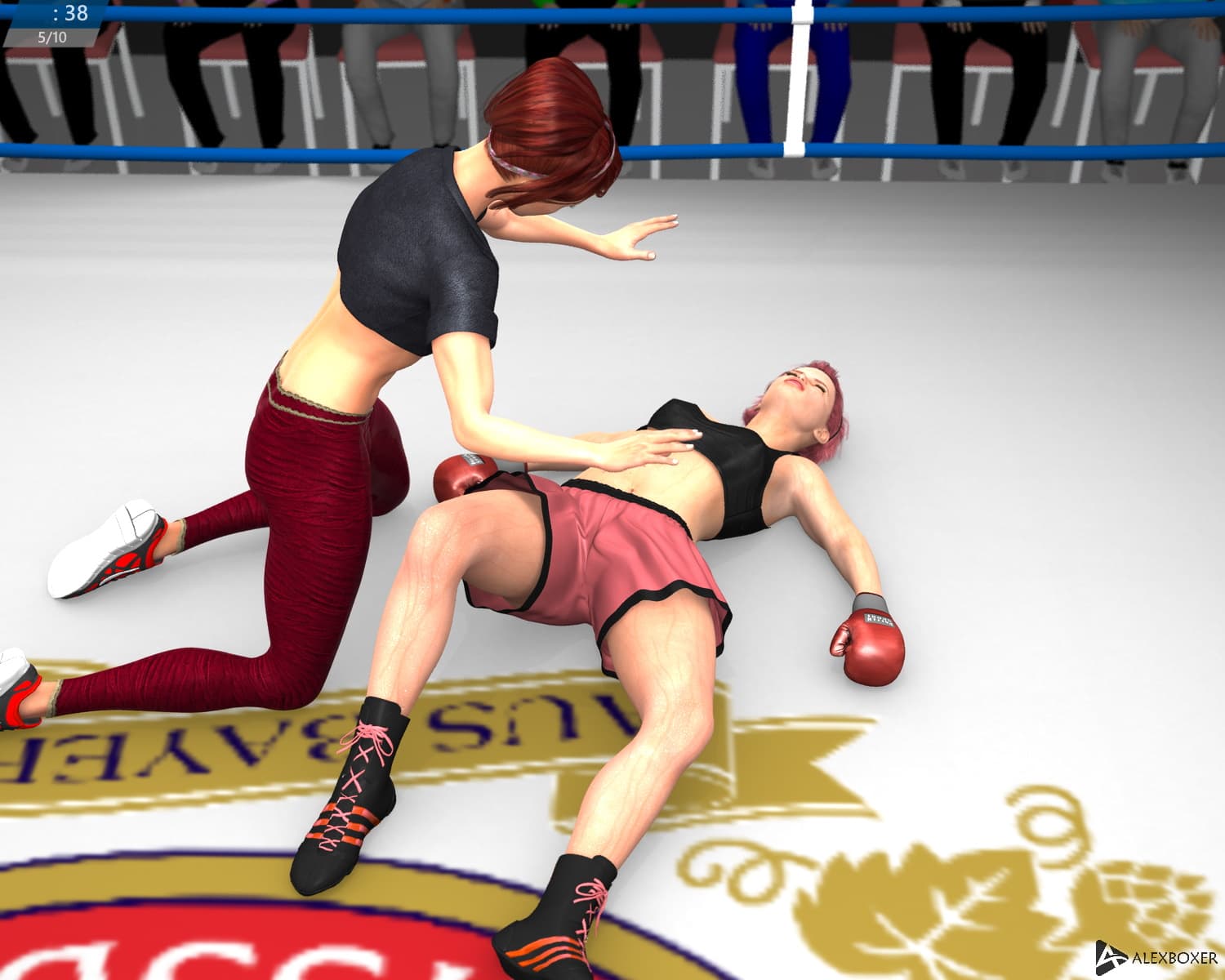 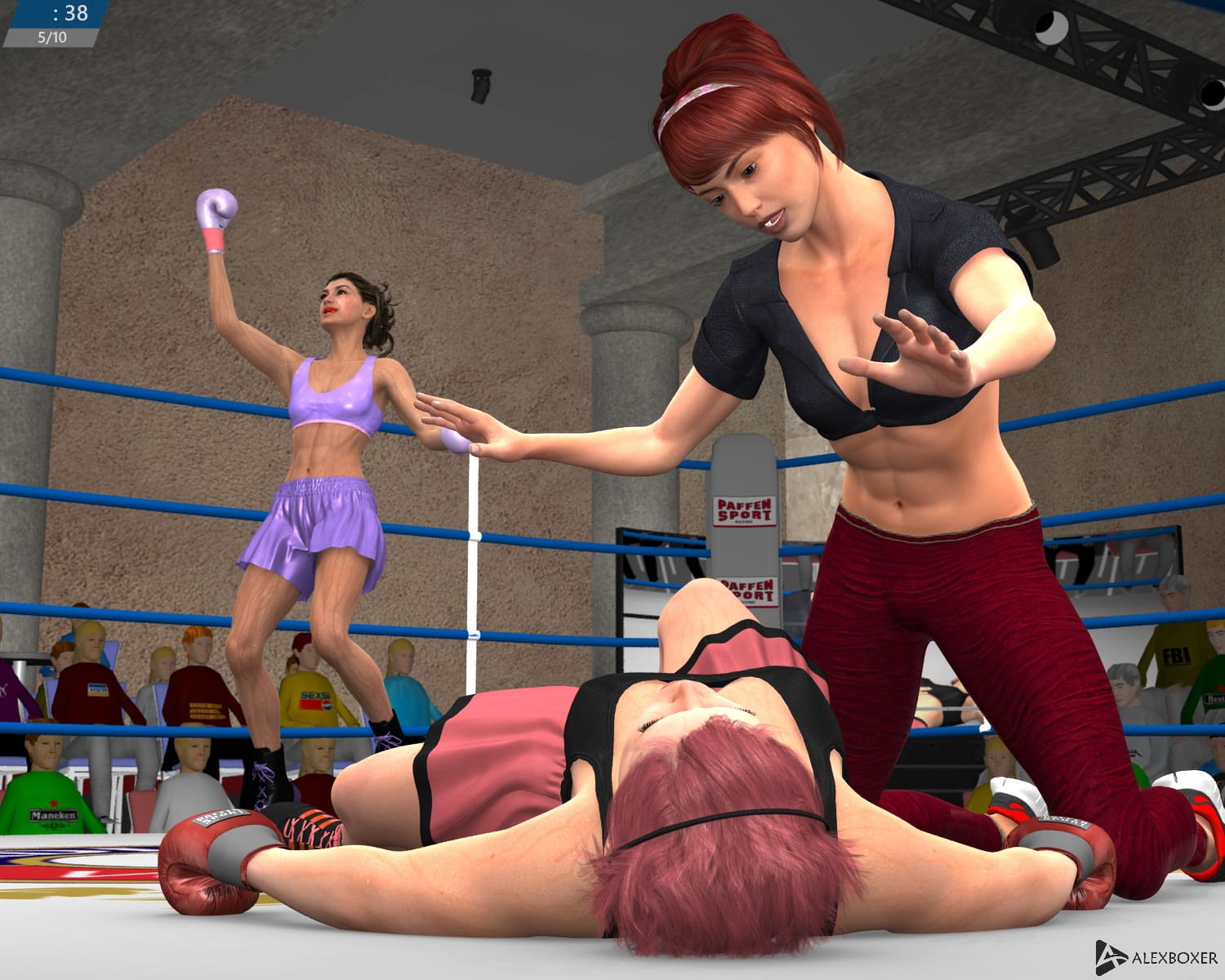 As Michaela’s corner rushes in to help the fallen fighter, Virani can hardly believe her eyes. She has completed her dream and become champion. The moment is almost overwhelming for her.

It eventually sinks in and she runs to the turnbuckle, leaping and raising her arms triumphantly.

The Canadian Cobra is champion of the world! 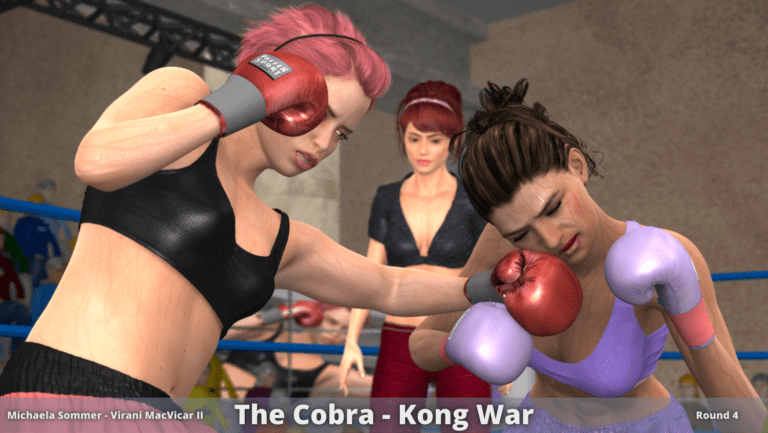 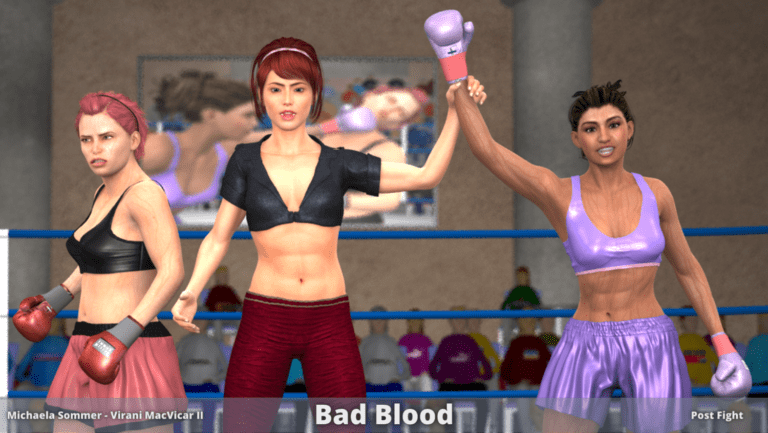