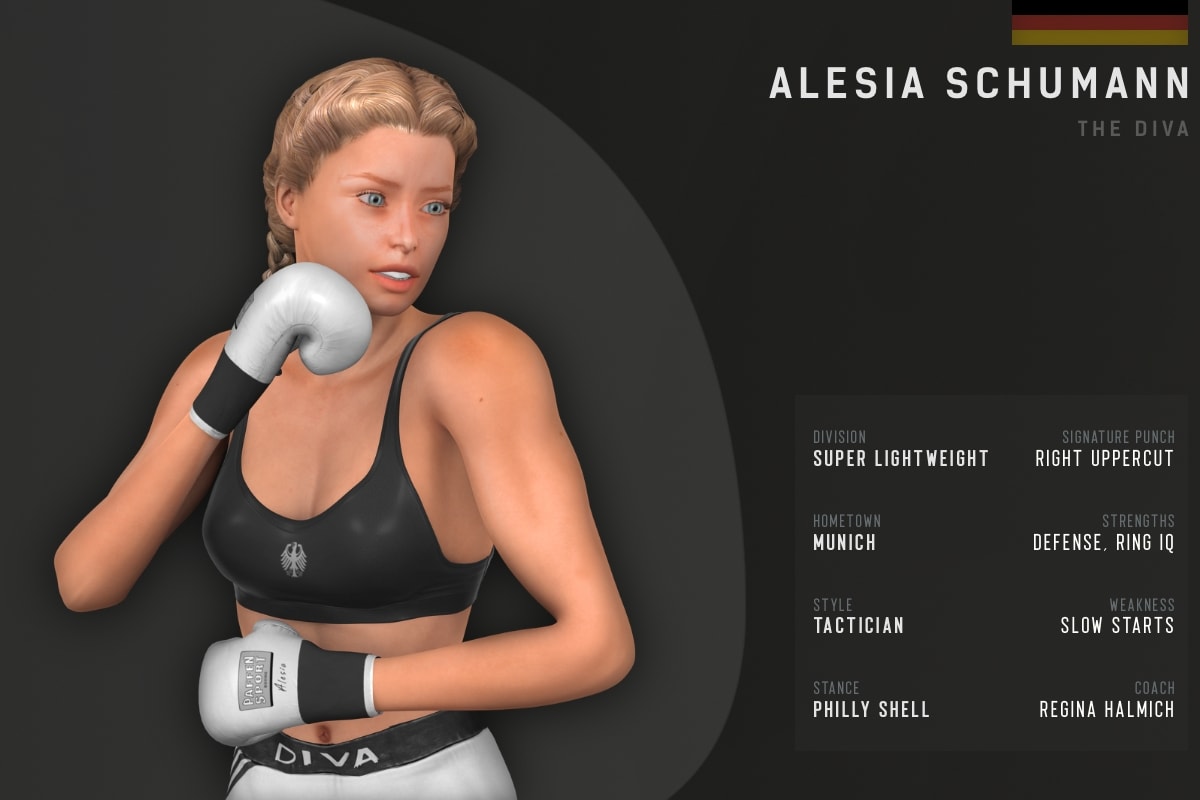 Alesia Schumann is the reigning Super Lightweight champion of the world. Born on 27 November 1992, she hails from Munich, coming from an upper-middle-class family. Her father is a manager at a large industrial company based in the Munich region and her mother is a freelance writer.

Childhood was a relatively peaceful affair but Ally already showed signs of what she would become. Fiercely independent, she would handpick her friends and otherwise remain the outcast in a group-oriented German mindset.

Teenage years were a bit more turbulent. She developed a hot temper that sometimes landed her in detention. No matter how right you thought you were, she would take you head on and never change her mind. Many teachers hated her for that.

How she started boxing

There were no physical fights, though. Alesia always had a fascination for boxing on television and she keenly followed Regina Halmich. She didn’t do anything about it until she heard about a non-competitive gym managed by a former pro boxer. Her natural interest made her show up on a late afternoon after class when she was 16. The thought of competition never brushed her mind.

Alesia signed up. She loved the rituals, gear, and codes of the noble art. The Bavarian became a gym rat and she was happy with her school and training routine. That’s until she felt that she had enough talent to upgrade to a more competitive gym, where coaching would be more demanding and where sparring would prove to be a bigger test.

During the very first training session there, most people ignored her except for one coach, Maxim Weiß, who talks to everybody and anybody. She asked for a few rounds of handpads and he said: “of course”. A few minutes later, between rounds, he said “you can certainly throw a punch”. He turned to another girl who was shadow boxing in the ring and said “right?” She nodded.

Their sporting partnership grew. He trained Alesia, encouraged her… and made her pay the price if she dared to disagree. The one time when she said she was too tired to continue, she went back to him a few minutes later with a guilty face. Five gruelling rounds of handpads followed. Her hands became stiff and her arms too heavy to lift up. Lesson learned.

Success as an amateur

The coach encouraged her to try her luck in the amateur ranks. “At least one fight, he said. You have talent and who knows if you’ll like it? If not, we can leave it at that.”

Alesia reluctantly agreed but the hard work paid off in amateur competition at Super Lightweight. She won her first fight by outlanding a shorter but bulkier boxer. The only two setbacks on the road to a championship were a stoppage due to a brutal liver punch and a controversial decision on points. She had to use all the weapons in her arsenal to earn national glory, defeating her best rivals one after another in a tough tournament.

Her title defense a year later was a different affair. She breezed through the tournament but got owned for four rounds by a familiar opponent in the final. Her record in the amateur ranks stands at 41 wins and three losses, with one national championship.

Having seen it all in the amateur ranks, she leveraged her reputation to get a promoter’s endorsement to turn pro.

Alesia started her career by outgunning Maria Méndez, from Spain. A lucky victory against Akane Watanabe, from Japan, followed. Then, Anna Schwartz decided to challenge the starlet who got a surprise sponsorship from gear maker Paffen Sport. It ended with an easy first-round stoppage.

The impressive result landed Ally an unexpected WBC Silver title shot, which she won against Amber Rose to earn a coaching offer from legend Regina Halmich. She didn’t take it up immediately, out of loyalty for her trainer.

Upholding tradition, the Bavarian lost against Stephanie Ward on her first defence. A technical knockout. She then fired Maxim Weiß for bad coaching tips and jumped on Halmich’s offer. What followed was accepting an offer to fight Lilly Sanchez, a tough puncher from Mexico City. She lost that fight by knockout.

Nevertheless, Halmich had faith in her newly-recruited fighter. She put her through a transformational program to turn her into a  tactician. A gruelling training camp later, she was set to reboot her career once again. Facing Masae in Japan, she earned a fourth-round knockout after wearing her opponent down with body shots. During the same trip, she had a rematch against rival Akane Watanabe, who she defeated with a knockout in the 10th round.

A scandal erupted when Alesia had her rematch with Anna Schwartz as the eliminator ahead of the German championship. Her sister Sophie was kidnapped by gangsters and she had to get knocked out by Schwartz. Police captured the criminals and the federation reversed the result to a win by disqualification.

With a title shot in hand, Ally faced Katia Nagel in late July 2018 in a highly disputed bout that she won by decision after 10 rounds. She successfully defended the title more than a year later with an impressive destruction of her mandatory challenger, Stella Haussmann. Then, she took on Taylor Grant in a superfight, pulling off the upset with a stunning knockout to become mandatory chalenger for Anastasia Orlova’s world title.

Boxing politics made Ally drop her German title to focus on her world championship fight. She won it by wearing down the tall Russian patiently before scoring a Round 9 knockout to achieve her dream.

Alesia loves moving around, avoiding punches and firing back from a good position. Her trademark punch is the right uppercut in the face. She is often a bit taller than her opponents – Germans are bigger and taller than most Western peoples – but she also likes to get inside when she senses a good opportunity. Her left hook comes from awkward angles to surprise opponents. Once she hurts an opponent, she pounces for the finish.

Friends with Virani and Chelsea

Ally has a tight-knit circle in Germany, and she isn’t keen on having a large community of friends. However, she has a soft spot for the likes of Virani MacVicar and Chelsea Carter.

A sparring session with Virani in 2017 sparked a friendship with the Canadian Cobra. They enjoy the time they can spend together, particularly when they can be ringside to attend respective fights. There’s friendly competition as well.

The same can be said about Chelsea Carter, who met Ally after defeating her sister Sophie in London. The two immediately bonded and agreed that they will face each other one day.