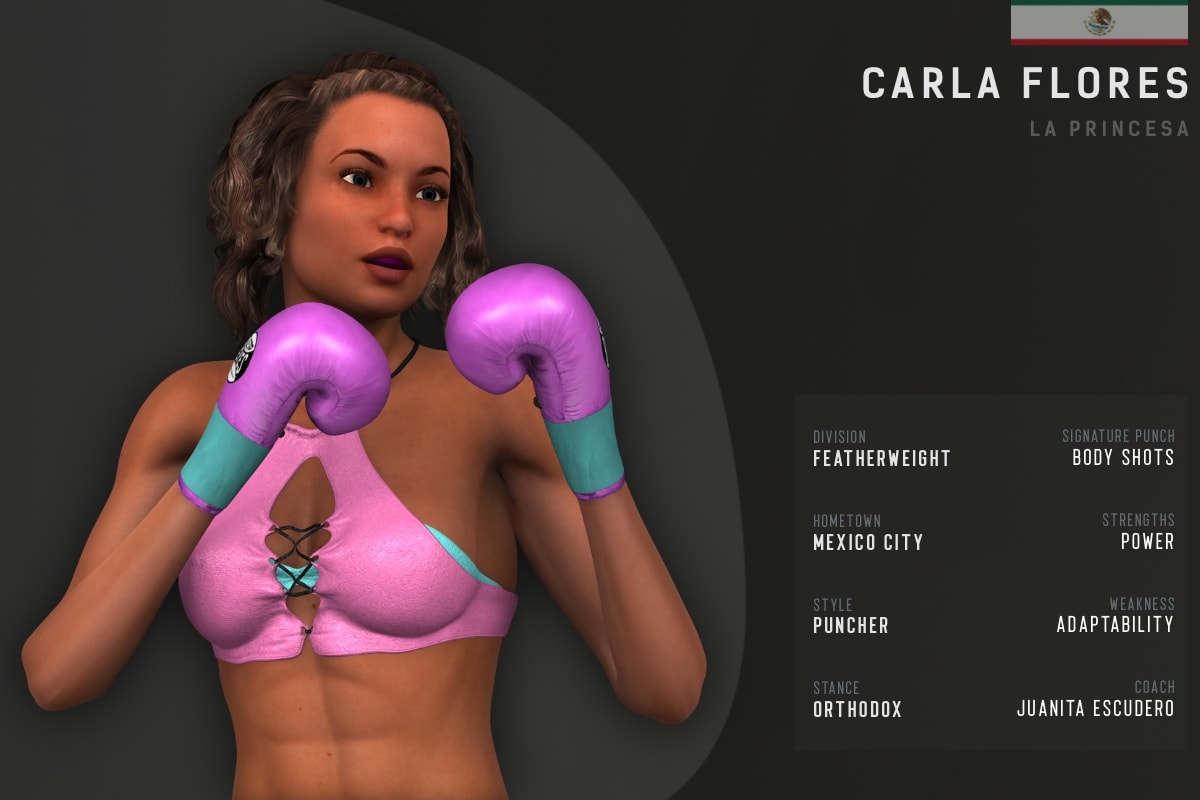 When you think of a Mexican boxer, you tend to think of someone that has come from poverty to become a star in the fight game. Carla Flores bucks this trend. Born to a wealthy family of bankers from Mexico City, Carla Flores could have chosen an easy life, but her passion of boxing that was inherited from her father (a huge boxing fan) led her to attempt to forge a career in the ring.

However, her family did not want her to attend with the ‘riff-raff’ that make up most of the clientele of boxing gyms in Mexico. So they improvised. They built a small but functional gym in the basement in one of their homes and paid handsomely to have top coaches from around Mexico attend at their house and teach Carla. Boxing, home-schooled.

Carla proved to be a quick study when it came to boxing, picking it up the sweet science with little difficulty. Even in her youth, Carla had a natural aptitude to punch well to the body, something that would carry over throughout her career.

Carla made her amateur debut at the age of 19, and was fairly successful in the amateur ranks, eventually compiling a 13-4 record, though, disappointingly for her, she fell short of collecting any major honors. The closest she came was in the 2014 Mexican Amateur championships, where Carla was stopped by eventual winner Daniela Badajoz in the 2nd round.

But Carla’s enthusiasm for boxing never waned and her coaches finally convinced her family that if Carla was ever going to progress towards her dream, she needed to join a real gym. So the Flores family pulled some strings and had Carla join up with Juanita Escudero, the trainer of many of Mexico’s great boxedoras. It was here that Carla first got thrown to the fire.

Carla showed up on that first day of training in her pristine gear. Personalized Reyes gloves. Personalized trunks. It was a bit of a tone deaf moment, with the majority of the clientele being fighters that had scraped and clawed just to get any sort of usable equipment for their training. One fighter took particular umbrage to the addition of Carla to the gym, the Mexican Featherweight champion, Maria “La Tigresa” Garcia. No doubt that she saw this young, rich girl to be a threat to her standing in the gym and, eventually, to her title.

Carla struggled in the new gym, particularly in sparring, where each of her sparring partners seemed to revel in teaching the rich, new girl a bit of a lesson. The worst offender no doubt, was Maria Garcia herself. It seemed like every time that the two shared the same ring, Maria would land a punch at full power, or push the younger Carla to the ground. The message was clear – Carla Flores might be here in this prestigious gym, but she was not welcome. It was tough road to hoe for Carla, but probably good for her to face some adversity.. Some of the boxers grew to respect Carla’s natural talent and hard work, but some would not be won over. Maria Garcia herself gave Carla the nickname that she would later use as an in-ring moniker – ‘La Princesa.’

One day, the in ring bullying by “La Tigresa” went too far, and she just about broke Carla’s nose with a punch after the bell of their sparring session. That was the sort of indiscretion that Juanita could not afford to have in her gym. She realized that she would have to get rid of one of the girls to keep the peace between them. Juanita chose to keep Carla, whose family was family was helping fund the gym. “La Tigresa” found another gym and Juanita made it clear to the rest of her boxedoras that this sort of behavior was not going to be allowed. Even champions were not immune to discipline.

After Juanita determined that Carla had been appropriately seasoned, she allowed her to turn professional. In December of 2015, Carla Flores won her first professional fight by decision. Three more victories followed in 2016, with two of them coming by way of stoppage (mostly just overwhelming opponents that were out of their depth talent wise.) The only blip to Carla’s record was that she was knocked down and in trouble during one of those victories. Still, with the Mexican champion, Maria Garcia coming off a devastating loss, it was determined that the time was right for Carla to take a step up in competition and for her to face the Mexican champion.

It should have been the fight that announced Carla Flores to the wider boxing world. Maria Garcia was the Mexican champion, but she was a fringe top-15 fighter at best and at 38 years old, she was widely seen as far past her best. Mexico was hungry for a fresh face to represent them in the Featherweight division and Carla Flores, who was young, pretty and eloquent, seemed to be a natural fit.

The first round went to plan, with Carla dominating with her speed and her jab. The second round went mostly the same, until nearing the end of the round, Maria Garcia got inside and landed a right hook that reverberated around the arena. Badly staggered, Carla survived the round, but her confidence had taken a big knock.

The third round showed Maria Garcia’s veteran guile as she slipped inside of Carla’s long jabs at will and went to work with scything hooks to the body. Carla had never been under an assault like the one she was receiving, and though she gamely took the punches, it was clear that the starch was being taken out of the young prospect. The fourth round was horribly one sided, as Carla’s confidence slipped terribly. Only by spending the last twenty seconds of the round virtually running away from her opponent did Carla survive.

In a different boxing culture, this would have been the point that the towel would have been thrown in. But Mexican pride would not allow such a way out, neither would Carla ask to be saved. The fifth round would not last very long. Maria Garcia came out throwing haymakers and connected with one that staggered Carla and had the young fighter on the way to the canvas. A more merciful opponent might have let the fight end right there. “La Tigresa” was not merciful. She landed one more powerful right hand that put an exclamation point on the fight. Knocked completely out cold, Carla lay flat on her back, exposed as yet another prospect who crashed and burned upon having to face real competition.

The replay of the knockout was shown on every sport show in Mexico. It was a hit on Youtube too, proving that fans just about everywhere loved watching the rich girl get served.

It was a bout that could have easily ended Carla’s career, and certainly it gave her doubts if she wanted to continue with this brutal sport. But even after that loss, boxing still called to her.

Carla took a six month absence from training, but even out of training, she still followed the boxing world. She re-watched her fights from her favourite fighters, Juan Manuel Marquez, Erik Morales, and of course Julio Cesar Chavez. She began wondering why she couldn’t fight like them. Then she watched a replay of her own fights and she saw the stark difference between the two. She didn’t fight with heart. She shied from punches. She didn’t show the heart or desire that her idols had. Carla decided that if she was going to make a comeback to boxing, she would do it by fighting with the style that was so popular in her home country.

When Carla returned to the gym, she rededicated herself. After 6 months of hard work with Juanita, Carla was a changed woman. She now displayed real power, aggression and offensive instincts, To compliment the changes, Juanita encouraged Carla to ditch the bland ring gear that she had worn for her first pro fights and embrace who she truly was.

That day, “La Princesa” was born.

Embracing the taunting nickname that had been given to her by her gym mates, Carla bought bright, flashy new ring gear that fit her energetic personality. She was going to show the world who she really was.

A string of victories followed. Sure the competition was not of the highest level, but Carla not only beat her opponents, she trounced them. In 2018, she put together 4 victories, with all of her fights coming by stoppage. This was the new and improved Carla Flores. Only one obstacle remained in her path, Maria Garcia.

The rematch was scheduled for January of 2019 and after a pre-match war of words, the two boxedoras went at it. But this time, it only took a few rounds for a gulf in class to emerge. The Meixcan champion was now too old, and too slow for Carla, who had now learned how to fight through adversity. At times, Maria would be able to land a few punches, but Carla would be able to storm right back.

The end for Maria came in the 4th round. A powerful combination shook the Mexican champion and sent her into the ropes reeling. A younger version of Carla Flores may not have known how to close out the fight. “La Princesa” knew how. She faked a jab to bring Maria’s hands up and then through a quick and powerful hook the liver which landed perfectly. Stricken, Maria Garcia headed towards the canvas. But Carla was able to give her one last punch on the way down, payback for what “La Tigresa” had done to her in the last fight. That punch completely ensured that the Champion would not rise. Strutting to the neutral corner, Carla knew that she had vanquished her demons, and the referee’s quick pronouncement of a knockout was only the icing on the cake.

With Mexico conquered, Carla turned her attention to making waves in the promised land: America.

While Mexico was where Carla’s heart lived, she knew if she wanted to create a legacy that would be remembered, one similar to her idols, she would have to go north and fight in the land of opportunity like they had.

With Carla’s parents supplying the connections, Carla’s promoter was able to come to an agreement with DAZN – who promised that she would be given the fights that she wanted to move up the rankings. A fight with the American Jessimin Reed, was offered and accepted. If she was victorious, an even higher profile matchup with Virani MacVicar, the Canadian star was in the offing.

Carla watched from her home as Virani dispatched her overwhelmed opponent in style, but she wasn’t afraid of MacVicar’s big power or fan following. The fight with Virani was what she wanted. She knew that a fight between two aggressive punchers could be a fight that was talked about for years afterwards.

But first up was Jessimin, and Carla surprised many ringside, not by winning, but by winning with ease. The taller Jessimin simply could not withstand her punches, and after wearing her down to the body, Carla was able to polish off the American fighter. To her delight, Virani congratulated her on her victory and upheld her end of the bargain, verbally accepting a fight between them.