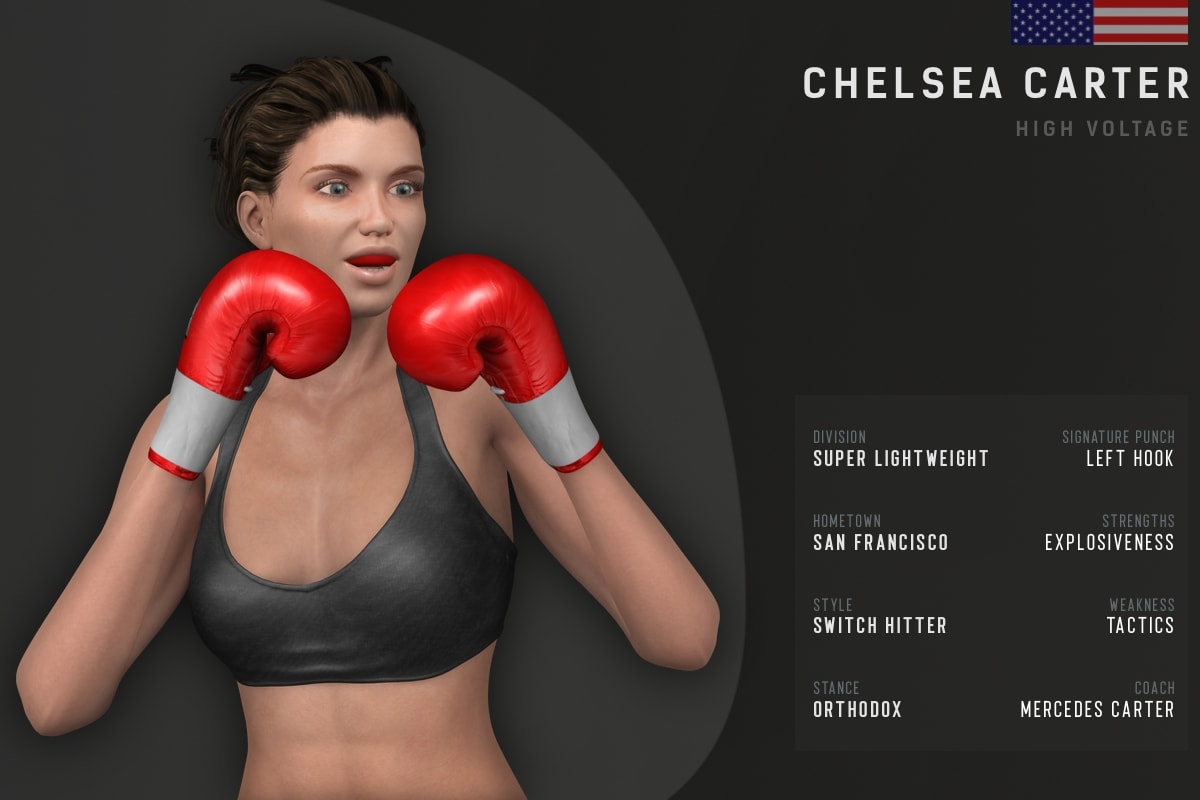 This character is the successor of Anne Carter in my storyline, taking over the role as Mercedes’ cousin. Chelsea’s similarities and differences are intentional make her an offshoot, but not a clone. I make this transition thanks to the support of PhoenixCreed. After loaning Anne, he was kind enough to accept my request for this change, as I wish for the main actors on my site to be fully owned characters. I hope to make Chelsea’s personality engaging.

Born on August 29, 1997, Chelsea Carter was a troublemaker in elementary school in her native San Francisco. A bit of loner with a strong character, she caused all kinds of chaos in the classroom and in recess, often being the source of conflict.

As the typical response at the time, the family doc prescribed Ritalin to make her sit still. Before she made it to high school, her parents felt that giving medication to the child betrayed her true nature. Sports could do a much better job at channeling her energy and learning in life.

Chelsea started her sporting journey with volleyball, but she quickly got bored. Gymnastics went damn well. She won state competitions in California. It made her semi-famous among her peers before entering college. Her personality flourished as a mix of playfulness, strength… and pranks at everyone’s expense. At that point in her life, the one they nickname High Voltage had a fascination for American football, but there was obviously little she could do there. She was encouraged to join the cheerleading team to make use of her gymnast skills, but she passed.

The thrill of the battle

Chelsea rather found her soul at a boxing gym. Sparring sessions made her enjoy the thrill of the battle. Bending someone to her will was delightful. Being subdued by a skilled opponent was equally alluring. Engaging in combat always brought satisfaction, whether she gave or received punches.

There was one problem: relations with some of the gym members. While the boys got along with the former gymnast, a few girls and the only female coach ridiculed Chelsea’s previous sport. They sneered at her lack of punching power. Resentment built up and she turned sour. Earning more respect would have been nice, but coaches gave her little time to improve her game.

Thankfully, amateur boxing star and cousin Mercedes Carter came to the rescue in the most accidental way. Mercedes’ decision to escape her parents’ home in Baltimore and resettle in Detroit had made her fall off the map for years. The black teenager wasn’t present at family gatherings anymore.

The cousins’ reunion took place when Mercedes fought at an amateur gala in Los Angeles in August 2018. It only took one look for Chelsea to recognize the familiar face of the headliner. She excitedly reintroduced herself to the amateur star and explained her gripes about boxing. Chelsea’s craving for respect fired up Mercedes’ wish to help a family member with whom she truly got along. The request for coaching was quickly granted. Chelsea would do the occasional back and forth from San Francisco to Detroit for training camps. The mentor would give selflessly in return for complete dedication.

Mercedes rewired Chelsea’s boxing, giving her a “transplant” of technique to better use her strong legs, fast hands, speed and agility. It wasn’t easy. The coach dished out heaps of tough love whenever Chelsea had a down moment, but she also cared and lovingly called her “pork chop” all the time. The gymnast got her act together, perfecting the art of moving around and throwing combinations.

Chelsea started boxing as an amateur and followed the professional ranks more closely. She discovered this German fighter called Alesia Schumann as she watched fights on YouTube, and quickly became a fan. Completely getting ahead of herself, she daydreamed about getting in the ring with Alesia. No idea how the hell she would manage it, but she sure wanted it.

The cute, irrepressible brunette found a way to hit the fast-forward button. She asked for Mercedes to use her contacts to get a wild card entry at the London Internationals. A natural Lightweight, she would try to meet Sophie Schumann, the tournament favourite in that category, and try to make an impression on Alesia.

Motivated by her new target, Chelsea won a few amateur matches and went to London absolutely pumped. Mercedes’ coaching did wonders and made her advance to the final. She pulled off the miracle by ignoring the intimidation factor against the big puncher, stunning the audience and stopping Sophie.

Impressed by the performance, Alesia went straight to Chelsea at ringside. Fan and idol immediately felt chemistry, and Ally promised a future match when Chelsea would be ready, for the thrill of the battle. Achievement unlocked… until Mercedes heard of it. She wanted to find Alesia and call the whole thing off. Chelsea had to tackle her cousin physically and pour buckets of rebellious enthusiasm to sell the idea of turning pro. It worked.

The first match was a loss against a square, bulky puncher. Chelsea boxed well, but lack of punching power cost her the decision. Today, she wants to face that problem and put her career on the rails. After putting on some muscle and working on her punching power, she earned her first professional win.