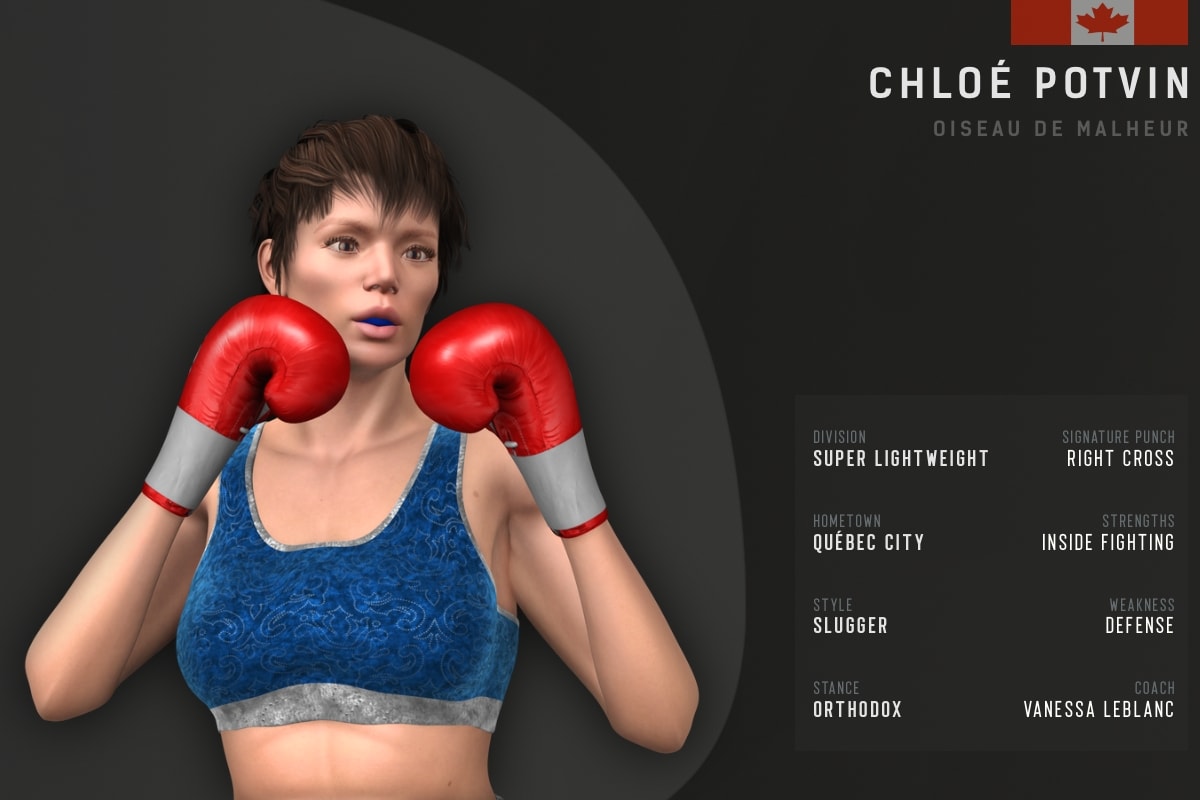 Born on 14 April 1994, Chloé Potvin hails from Québec City, in the French-speaking province of Québec, Canada. Her nickname Oiseau de malheur means bird of misfortune. Chloé went through hard times as a child and teenager due to family trauma.

After her birth, her mother suffered from deep post-partum depression for several months, creating a stressful environment for Chloé as a baby. The syndrome eventually subsided, but it left permanent damage. First on the baby, whose stress level was always higher than normal, and second on the mother, who gradually developed bipolar disorder.

Mom’s mental illness settled in slowly enough to be undiagnosed for years. The mood swings, however, amplified and led to alcohol abuse. That derailed her career as women’s rights militant and government worker, leading to an eventual diagnosis of the disorder.

Nasty verbal fights broke out at home and the couple divorced when Chloé was 9 years old. Her dad won the child’s custody for obvious reasons. It took him years to fully recover although his former wife was kept “under control” thanks to social services and heavy medication. Relations were tense and the matter of Chloé’s custody fuelled quarrels.

When dad recovered, he did it in style. Not only did he become more successful at work, becoming the “number two” at his industrial company. He met an incredibly beautiful, intelligent and smart social worker and it was love at first sight. At his daughter’s birthday party, he made a very positive, emotional speech. He dropped on one knee and asked for his girlfriend’s hand. She said yes.

At 14 years of age, Chloé thought she had found normalcy after years of disturbance. The future would be bright with a nice stepmother. Or so she thought.

The news of dad’s new marriage caused stupor when he met Chloé’s mom. Enraged and jealous that the man had replaced her, she snapped. A few days later, she stole a car and attempted murder by running into him as he was riding his motorbike. The collision almost killed him. He spent two weeks at the ER, escaping death’s clutches narrowly and leaving the hospital with mild motricity problems that even excellent treatment could not solve.

Needless to say, the police captured mom and brought her to justice. She now sits in a prison cell.

With mom in captivity, a relatively healthy father and a brilliant stepmother, Chloé breathed a sigh of relief. On the other hand, she remained traumatised by the experience. This made for turbulent teenage years. She was a distracted, stressed D-student in school who needed support until that fateful day in physical education class. The students learned basic martial arts techniques.

Chloé was struck by lightning, so to speak. She picked up the techniques naturally and felt like she was born to fight. She hastily joined a boxing gym and found solace in there. It helped that the local coach, a former amateur star, was a damn good one. He groomed her until she was ready for a bout.

Unfortunately, he fell sick on the evening of Chloé’s first amateur fight. That big inconvenience didn’t have an impact on the result, however. A recently retired amateur fighter from the gym, Vanessa Leblanc, picked up coaching duties on the night. She knew her boxing well enough, having won six Canadian titles as a Lightweight. An aggressive puncher, Chloé demolished her first opponent in two rounds.

Vanessa Leblanc became Chloé’s permanent coach. The young boxer had more limited talent than most, but her aggression, power and never-say-die attitude were prominent in the ring. Unfortunately, the Super Lightweight division category was highly competitive in Québec and Canada at the time. She racked up a 21-13 record as an amateur, usually failing to pick up important wins at tournaments.

Nevertheless, the Groupe GYM boss spotted her when scouting at an amateur event. He told her: “Your style isn’t tailor-made for four-round points battles in the amateur ranks, but the professionals, in which you’ll have more time after a few bouts. Your coach can teach you to be patient and sit on your punches.”

Bored as an amateur, Chloé accepted the offer enthusiastically. Groupe GYM matched her mostly against visiting Mexicans in opening bouts at their events. Once hit by bad luck, Chloé flourished to become her opponents’ bird of misfortune. Thus, she became one of the Top 5 fighters in the Super Lightweight division.

Trying to become a top title contender proved difficult, though. Super talent Taylor Grant treated her to a TKO in November 2018. The French Canadian bounced back with a decision against Sky Houghton but misfortune struck again. A skateboard accident led to a legal fight over the status of her contract, with the promoter arguing that she broke terms by practicing another sport.

Chloé came out of the spat victorious and free to pursue her career. She returned to the ring in October 2020 with a big knockout win over Stella Haussmann.