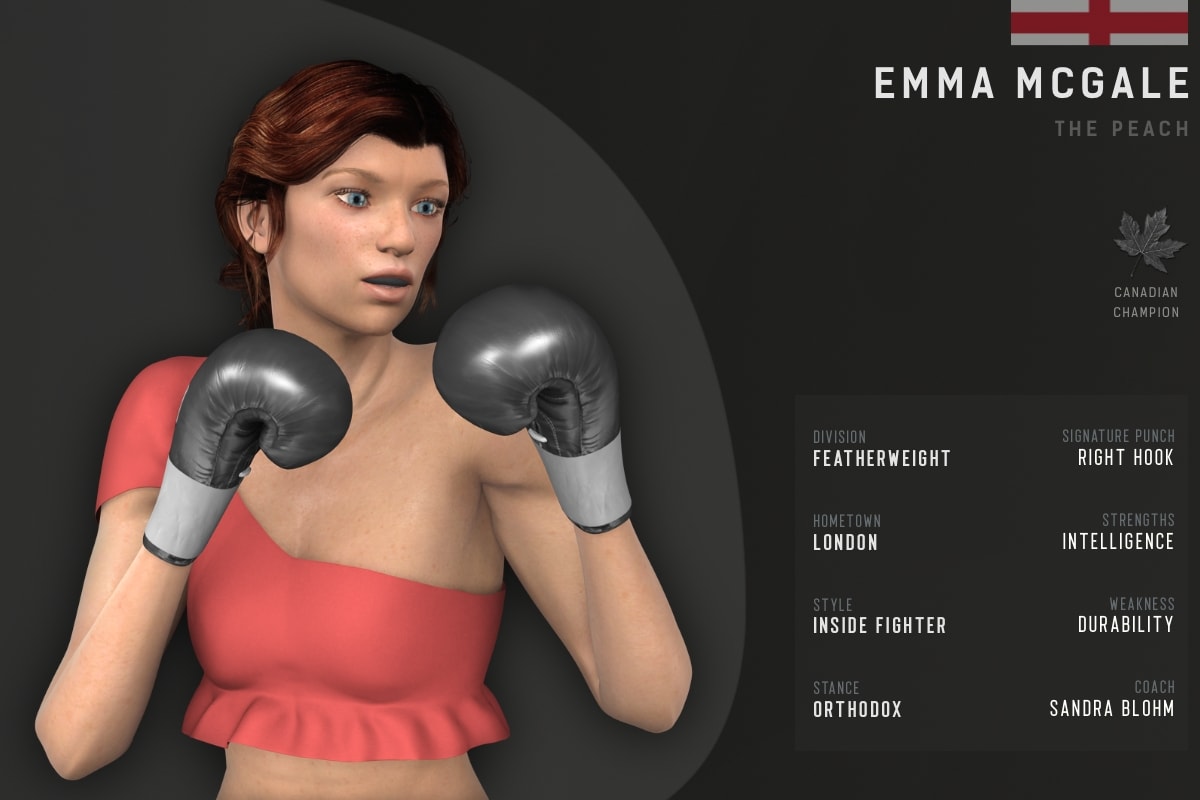 Emma McGale was born in London, England, where she was the youngest sibling in a family of four. As younger children are wont to do, she was a bit of a rebel and a tomboy. She had been a standout on her youth football teams, but she never really developed a love for the sport.

A naturally shy girl, she had done well in school and was seemingly on a solid pathway to a normal career. However, that had all changed in the accident.

It was the type of story you see in the news every day, it seemed. Someone runs a red light and hits another car. Unfortunately for Emma, that day she had gotten the worst of it, breaking her right leg, fracturing her wrist and suffering internal injuries that left her bedridden. She had to defer her first year at university while she recovered. It was during this recovery that she found boxing.

At first, it had simply been another way to train and recover. But more and more, it was the only thing she wanted to do while at the gym. After she recovered and resumed her studies, she kept training at a local gym, slowly gaining confidence.

Her amateur career was short and decent, going 7-4. She never beat the top fighters, but she generally gave a good account of herself.

After graduating into a recession, and not finding a job, Emma was tempted by an offer to turn pro. After all, money was tight. Boxing wasn’t going to be a career, but it could put food on the table.

Her career started out well, as she went 2-0 right off the bat. But after being put into what in retrospect was a massive mismatch against an 8-1 fighter, her undefeated record was gone. Another pair of losses followed, dropping her record to 2-3. By this point, Emma’s job prospects had largely stalled. She was going nowhere fast.

A pair of wins seemed to rejuvenate her career somewhat, but then she fought Kayleigh Parsons (see here: www.deviantart.com/alexboxer/g…) and was beaten and knocked out in the third round by a vicious body punch. It had been her TV debut. Not one to remember.

One would think that this was how the story ended. A 4-4 fighter that had been stopped in three of her losses was not exactly a hot commodity, and Emma had no intention of becoming a professional journeywoman where all she did was take losses. However, her story did not end there.

Thomas Nagy had watched Emma’s fight with Kayleigh, and although the result of the fight was not good, he saw that there was more talent to Emma than one might expect. He invited Emma to join MacVicar’s gym as one of Virani’s main sparring partners. Working with Thomas, Emma improved and gained confidence. Working with a solid training partner like Virani and a good coach like Thomas did wonders. She signed for Cobra Promotions as a 4-4 fighter, but one that was better than her record showed.

Emma’s first fight for Cobra Promotions saw her taking on Erica Jiminez, a journeywoman from Mexico. Emma showed massive improvements and absolutely flattened Erica with a first-round right hook that knocked the Mexican fighter out. Emma now had a highlight reel knockout of her own.

Moving forward, Emma is looking to establish herself in the tough Featherweight division and has her eyes set on winning a national championship.

Emma is something of an all rounder in the ring.  Generally, she does like to box from the outside and establish herself from there.  The ‘Peach’ packs a deceptively strong punch and while generally does not have one punch KO power, does have the ability to lay out most fighters in the division.