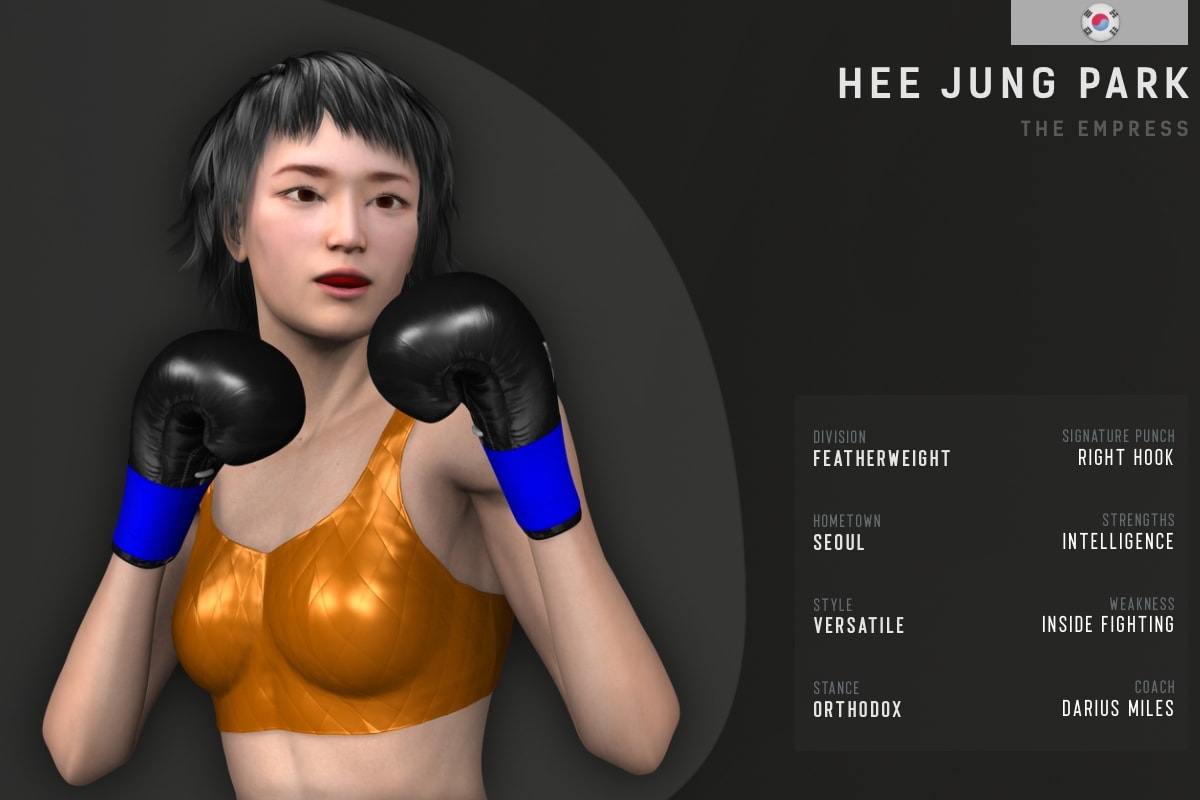 The fighter known as ‘The Empress’ was born in Seoul, South Korea on January 7, 1981.  A restless child that was always pushing boundaries, Hee Jung excelled at, and was bored by school.  In South Korea’s post Olympics boom, there were plenty of facilities around for an athletic and courageous girl to try her hands at.  Hee Jung tried most of them.  Gymnastics, Track and Field, just to name a few.  Taekwondo became one of Hee Jung’s early passions, though she had to fight to get any high level training, given that many coaches did not feel that females should become fighters.

When she was a teenager, the sport of boxing came to her attention.  South Korean fighters such as Jung Koo Chang, Sung Kil Moon, Myung Woo Yuh, In Chul Baek, and Young Kyun Park were often on the airwaves, producing exciting fights and producing many world champions.  Unlike her time training Taekwondo, the boxing coaches in Seoul had little issue in training Hee Jung, who quickly showcased a natural talent for the sport.

However, Hee Jung desired more than to just become a boxer – she also wanted an education.  She kept up her boxing while she completed her degree in History at one of Seoul’s best Universities.  Having graduated, she entered a job market still dominated by men.  Hee Jung clashed with authority in her early jobs, with her talent and drive she often excelled where her colleagues were lacking, but promotions would not come.  Frustrated again by this injustice, Hee Jung turned to boxing, where she could take care of business herself.

Aged 23, Hee Jung won her first professional fight.  By age 26, she was an experienced professional having a record of 8 wins and 2 losses.  Her 11th fight would be for the IBF Super Flyweight title, which she won by a 6th round technical knockout.  She would make two defences of her title before dropping a close decision and then a rematch.  Her career floundered slightly as it didn’t seem like Hee Jung could get back into title contention, and even when she did earn a title challenge, she fell short.  Her first knockout loss in 2008 would end her time at Super Flyweight, as the future Empress went about retooling her game.  Gone was the traditional Korean ‘warrior’ way of fighting, and in its place was the more cerebral style that she is known for fighting with even to this day.  Hee Jung placed renewed focus on fighting within herself, winning rounds by exploiting opponent’s mistakes, and sheer technical brilliance.

Birth of the Empress

By 2010, Hee Jung was knocking on the door of a World Title, this time in the Bantamweight division.  She would decisively KO the former champion in the 4th round to claim the IBF Bantamweight title, before making 4 dominant defenses of that belt.  One of the most feared women in the division because of her ability to break down opponents, it didn’t seem like Hee Jung was ever going to lose a round, let alone a fight.

It was during this time Hee Jung became a star in Korea.  With many of the male boxers of the past having faded from elite status, the public flocked to Hee Jung, who was by far Korea’s best boxer.  Exemplifying all that Koreans like to extol – their talent and their hard working style, Hee Jung was an unlikely star, but a star nonetheless.  Her brusque nature and disdain for public life prevented her from becoming a bigger star, but it probably kept her grounded in reality.

But what is a great fighter without a great rival?  It would be her rivalry with Miyo Takano that would define The Empress’ career.  The Empress had beaten Miyo early in her career, cruising to a Unanimous decision (although Takano had put Hee Jung on the canvas with a well timed right hand).  It was expected to be more of the same when Miyo and Hee Jung met in 2012 to fight over the Bantamweight title held by Hee Jung.  Miyo shocked the world, enduring a one-sided fight until the big Japanese puncher could land one of her trademark right hands.  In the 7th round, Takano’s right hand dropped Hee Jung.  A dazed Empress beat the count, and survived the round, but was knocked out in the 8th round, a victim of yet another right hand from Takano.

The rematch would be held in Takano’s home country of Japan, and given the historical rivalry between the two nations, tensions were high.  In the rematch, Hee Jung Park put on a display for the ages, outboxing Takano so decisively that she did not lose a single round.  Even as Takano pushed for a victory in the 10th, Hee Jung dropped the Japanese fighter with a crisp right hook, one of the few times the iron chinned Takano would ever be knocked down.

Their rivalry renewed for a last time in 2014, with Hee Jung now a champion in Super Bantamweight (her 3rd weightclass where she was world champ).  In a fight that would later become known as ‘The Slugfest in Seoul’ Takano would shatter Korean hearts after a hugely dramatic fight that saw each fighter down and seemingly out of it.  In the 10th round, Takano’s famed right hand found Hee Jung’s chin unprotected, sending The Empress to the canvas, out cold before she hit the ground.  That was seemingly the last moment of the Empress’ career.

Haunted by the loss, Hee Jung retired from pro boxing.  She parlayed her relative fame into a decent job, and it looked like Hee Jung’s next battles would be in the boardroom, not the ring.  But the itch to box never left Hee Jung, and it was her express desire to rewrite her last moments in the ring to be one of triumph, not one of defeat.  She would move to America, begin working with famously unorthodox Darius Miles as her coach, and plan her comeback.

It would not take long for Hee Jung to prove that she still had it.  This time in her 4th weightclass – Featherweight.  She decisively KO’d Amy Rucker, before winning the IBF Featherweight title in 2020 off of Yenifer Perez, ten years after claiming her first world title.