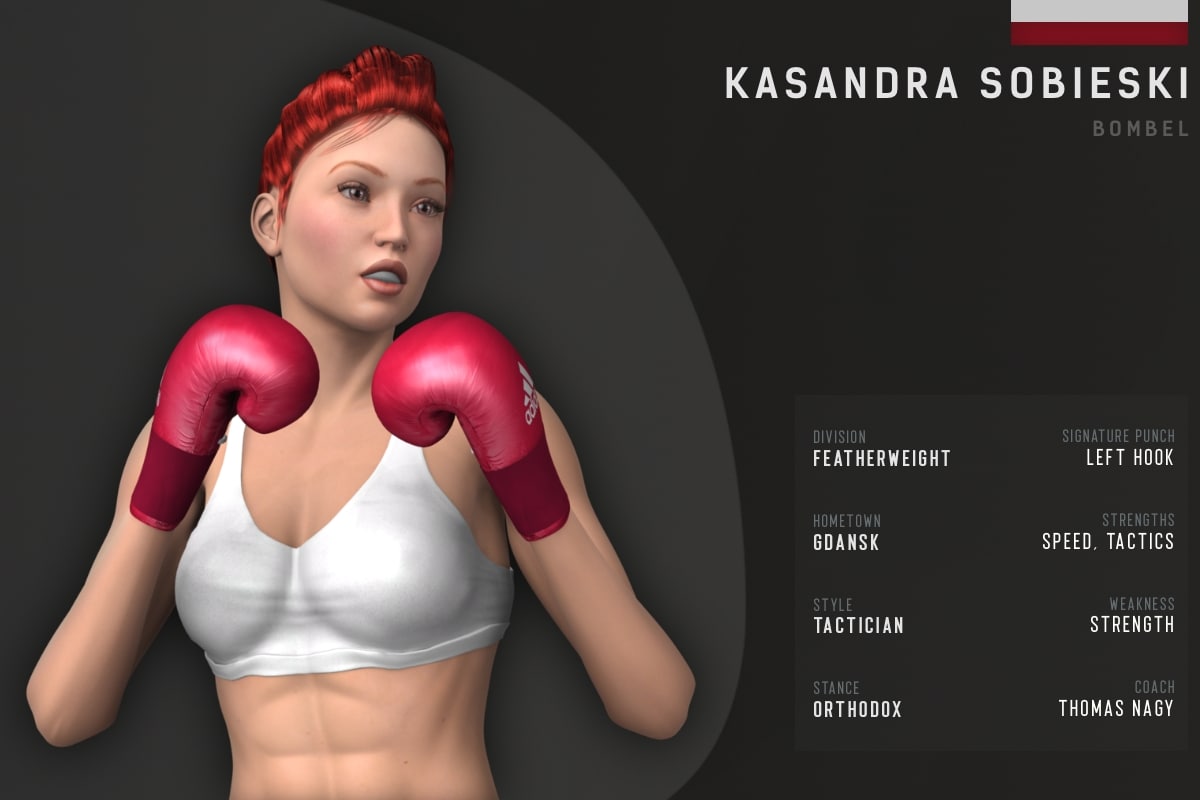 My name is Kasandra Sobieski.

You’ve probably never heard of me.

But if you have, you were probably an insomniac and managed to find a boxing match that featured me winning a 4th round TKO. That was my first professional boxing fight. And so far it’s been my only pro fight.

If you are…somehow, still reading this in the era of instant streaming, instant gratification, I don’t know what to tell you. You might be crazy. But you might be interested in my story, right from the beginning. You don’t get a choice in the matter because I’m writing it anyway.

I was born in a city that has had a couple of different names in the past 100 years. I call it Gdansk. You may know it as Danzig. It’s a lovely city…at least, that’s what my few memories of that city tell me. I was fairly young when my father, an electrician, moved to Germany for work. We ended up in Dortmund, typically known as a ‘industrial’ city, but was rapidly evolving into something different. It was not unheard of to be a Pole in Germany, the countries have a long and…complicated history, but it doesn’t make it easier to have a name that basically announced me as a ‘foreigner.’

My family moved again when I was 12 as Dad found a job in London, England. The transition was…hard. My German had become quite good, but my English had been a work in progress. On the plus side, nowadays I am a polygot. I speak Polish, German and English…and a bit of Russian, but I speak that language like a 4th grader. Also, on the plus side, there’s a large Polish population in London, so I stuck out a little less. But I still stuck out.

I was a pretty good student in school, regardless. Turns out math is math in any language. My other subjects were…so-so, but my academic career is not of much interest to this story. But high school does matter to this story. Because that’s when I got into my first fight.

Well, saying it was a ‘fight’ is kind of wrong. A fight involves two parties that are trying to inflict hurt on the other. My ‘fight’ was just a beating. I think I threw a punch. I’m sure it didn’t land. I do remember getting hit by a couple of punches , and that I fell hard to the ground and cowered until a teacher came in and broke the ‘fight.’

What started it? I think I said the wrong thing to the wrong person. It might have been me taking her spot on the high school soccer team. But it was probably because I was an easy target. Even today I am quite lean, so back then, I basically resembled a stick figure. Not exactly a fighter.

I got suspended for the fight. My mom was disappointed at the suspension. My dad…my dad wanted to know why her daughter ended up with a black eye and not being able to give out a similar punishment to my opponent. I had no answer for that. The truth was…I was weak and scared. I had no idea how to defend myself. So to my dad, this was a terrible failure for his only child. Polish culture prides itself on toughness (as does many other cultures). I sure as hell was not tough.

So my dad did the only logical thing for him to do. He signed me up at the nearest gym. If I had been English, I might have gotten signed up for karate. My dad…didn’t believe in karate. He said that it didn’t teach anyone how to fight. Besides, the gym I was being sent to was a mostly Polish gym. It didn’t do karate. It did do boxing. So he signed me up for boxing. He didn’t care I was a girl. He just knew I had to get tougher and learn how to defend myself. He was progressive enough, I suppose.

So, you’d think that this is the part of the story where I show natural aptitude for the sport, and realize I love it, right? Um. No. Do you remember being a teenager? Do you remember how you used to be when your parents told you to do something? You probably hated it, right? Yeah. I hated boxing too. I quit boxing…several times. My dad and I would get into heated arguments about it. He took away my phone because I wasn’t going to boxing. He grounded me. Each time I would relent. Then, I would quit again. Same old song and dance.

Anyways, do you remember that first fight I got into. Yeah, it turns out bullies don’t just go away because you took up boxing class. She picked on me again. We got into it during lunch. She slapped me. I punched her. She tried to hit me again. I punched her again. This time, she went down. There was no need to follow up. I beat up the bully. I boxed her face off.

I got suspended. I suppose I deserved it, according to the ‘rules’ of the school. I did the right thing though.  I stood up for myself.  Dad took me out for a steak dinner after I told him what happened. Best meal of my life.

After my suspension, the word around the school was that I was a kickass boxer. As far as anyone knew, that was the truth. That skinny Polish girl could fight. So, to fit in with this new persona that had made me…somewhat more popular, I had to keep up with appearances, I had to keep going to boxing class and train. Eventually, I got…kinda good. I have good endurance and am pretty nimble on my feet. Those are good attributes for boxing.

My first amateur fight…yeah, I did it because I was trying to impress boy. Taylor…god he was cute. He had a girlfriend, one that I couldn’t compete with (tall, blonde, and with boobs you would not believe) but he was into, as he said ‘UFC’ so he was impressed with a girl that could fight. Poor, naive 16 year old me thought that I could impress him if he saw me actually fight. So I got my first amateur bout, and invited him to watch it.

I honestly do not remember much about that fight. I remember the result (I won), and I remember having aat lip for two weeks afterwards. What I remember most was that when I went over to Taylor, he liked that I was a winner, but he didn’t like me…not in that way. My dreams of getting in the ring with him, showing him how to punch, which would lead to some kissing…yeah that was never going to happen, but…teenage minds. Not the brightest.

I stuck with boxing through high school, and I picked up a decent amateur record of 8-4. It was just…something I did. I kept in shape, used it to keep myself focused, and it gave me something to strive towards. It was never supposed to be a career…

I went to University for one year..and I didn’t really enjoy it. I was good at math, but I couldn’t really see myself making a career out of it. I didn’t really know what I wanted from my life. So I dropped out after one year. I figured that there was no point wasting money on University when it might turn out to be useless. My family understood, but they made it clear that I had to earn my keep if I was going to be living with them. I did odd jobs, I worked at the gym a little. I worked as a fitness trainer for a bit. I worked as a translator for a few months. It was…something, but it wasn’t exactly a life.

But I got a break, turned pro, and here I am…